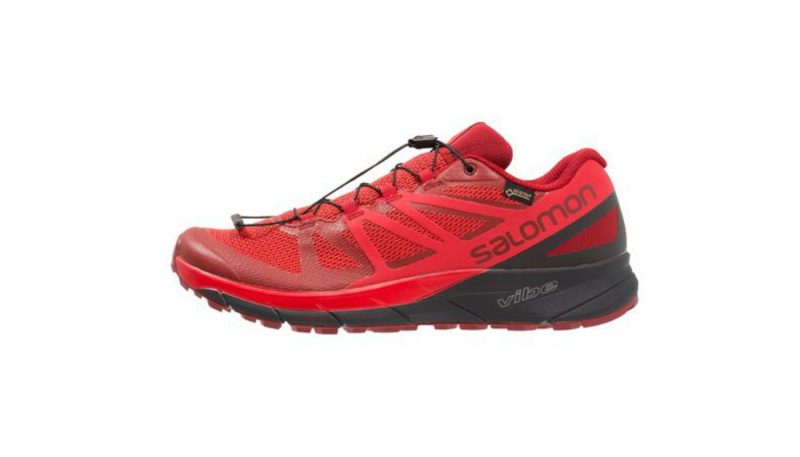 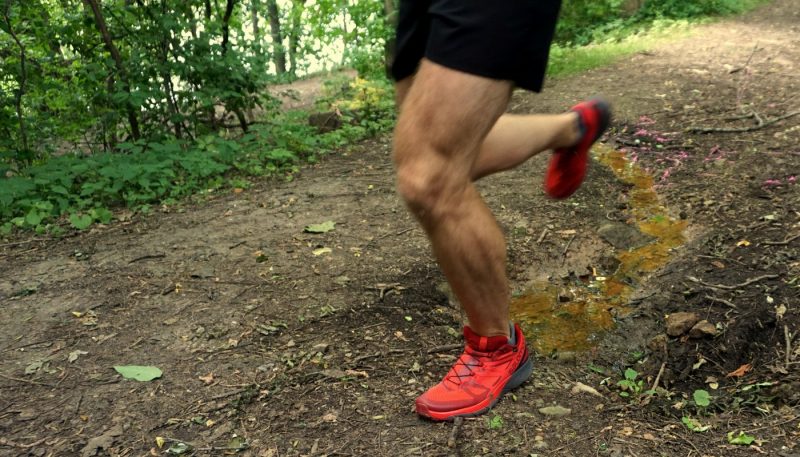 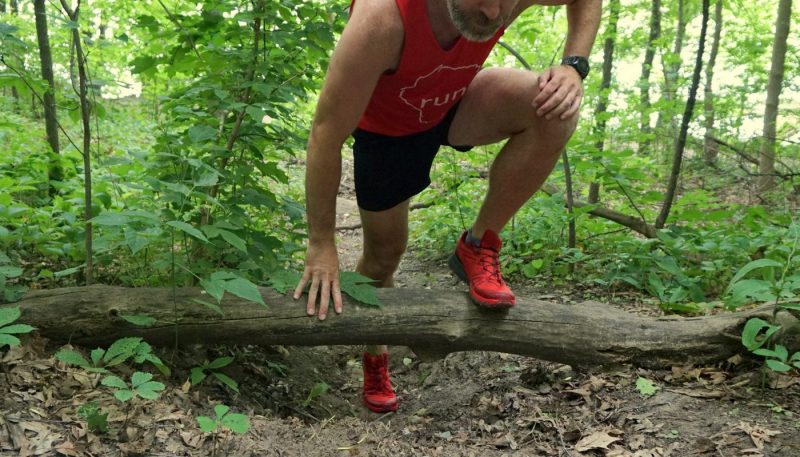 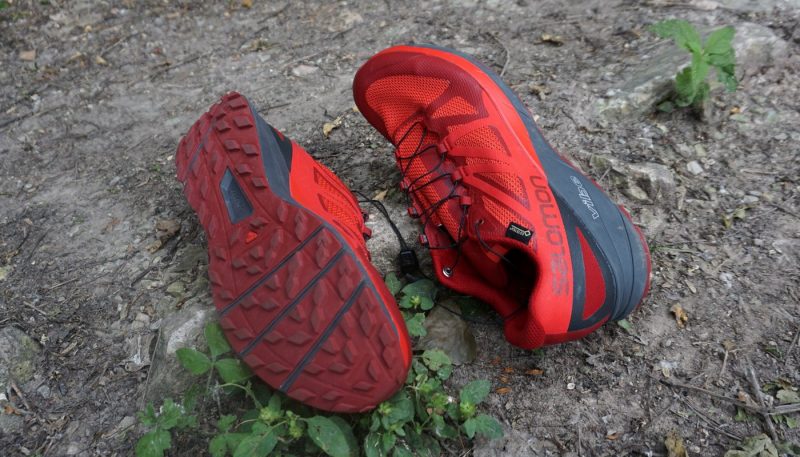 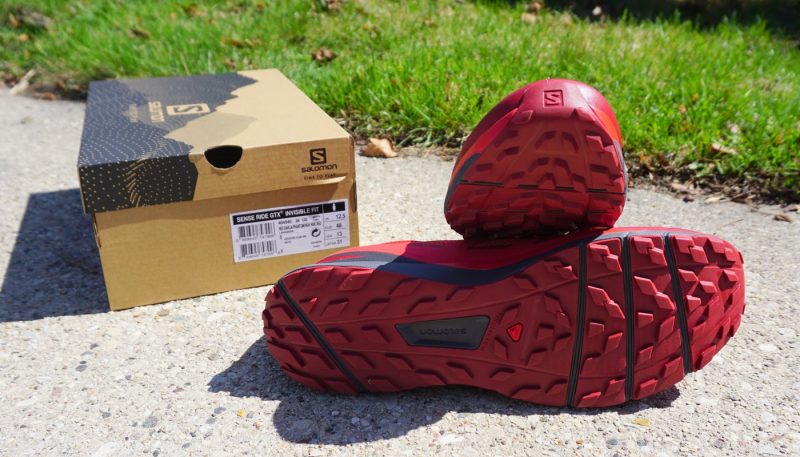 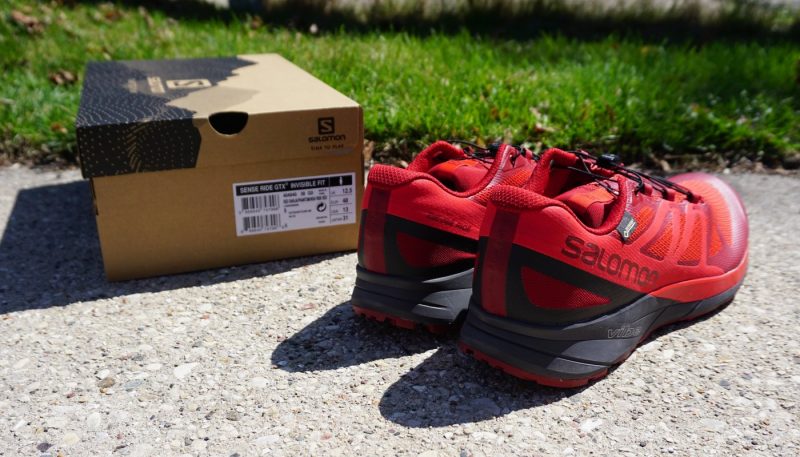 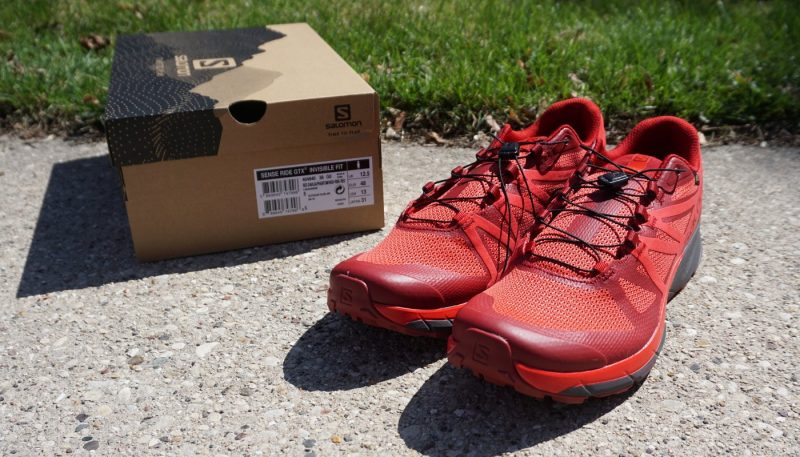 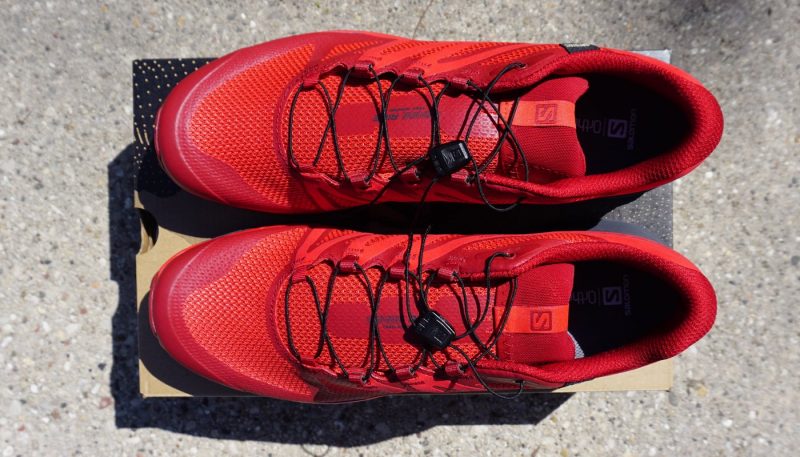 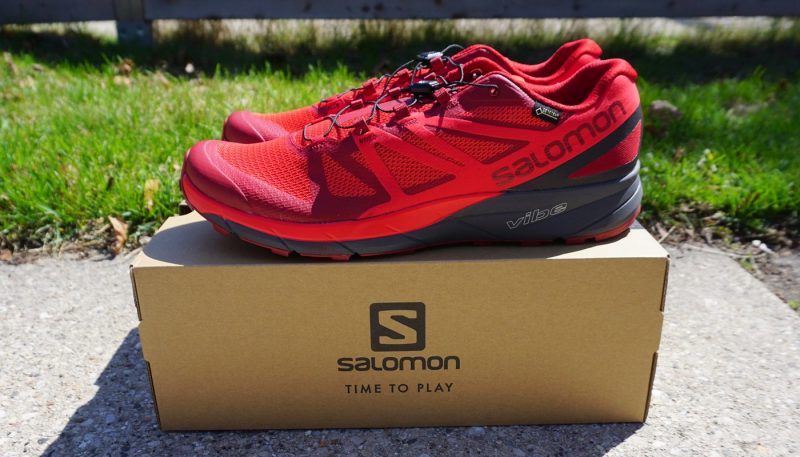 THE VERDICT
The Salomon Sense Ride GTX is a brand-new waterproof version of the previously-released Sense Ride. Overall, our wear-testers thought it offered a good balance between cushioning and performance, with a vibrant visual design. “I need two pairs of Sense Rides: one for the trail and one for the rest of my life,” said one of our wear-testers. Although there were some concerns about the narrow fit and speed-lacing system, our runners felt like the Salomon Sense Ride GTX is an excellent choice for trail runners looking for a speedy, responsive waterproof shoe.
FULL REVIEW

Our wear-test runners thought the Salomon Sense Ride GTX’s strengths were the protection it offered from trail elements (especially water), agility and responsiveness. The sticky, durable outsole was a particular high point for our wear-test team. One noted that he is, “always impressed with Salomon’s outsole rubber. It inspires confidence to hop around on anything, knowing you’re going to stick.” The snug fit makes the shoe feel like an extension of your foot. One of our wear-testers described it as disappearing when he ran, which is high praise for a trail shoe since they can often feel clunky and hefty.

For some of the runners on our wear-test team, however, the snug fit was a drawback. Multiple runners describe the Salomon Sense Ride GTX as narrow or constrictive, especially through the midfoot and toe box. Salomon’s traditional fit is long and narrow, similar to the fit from ON Running. It’s a performance-oriented fit, and runners who prefer the wide toe boxes of Altra or Topo shoes may find the Salomon Sense Ride GTX uncomfortably tight through the front end. Our wear-testers were also divided (as they typically are) on Salomon’s speedlacing system. It’s durable and fast, but some runners may have trouble making micro-adjustments to fit their preferences. Some of our wear-testers also reported hotspots on top of their feet, and felt like the speedlaces made it difficult to reduce pressure when and where they wanted to.

Since the Salomon Sense Ride GTX is a performance-oriented trail shoe, Salomon’s top priority wasn’t thick, plush padding in the uppers. Nevertheless, the materials are high-quality and comfortable. The rear third of the shoe, around the heel counter and the top of the tongue have a layer of lightly-padded dense mesh. In the front, Salomon has stripped down the Sense Ride GTX so the Gore-Tex treatment is directly against the skin. The seam at the division between the two sections could be a point of irritation for some runners. Our wear-testers commented how restrictive Salomon’s long and narrow racing last felt, although more than one of them praised the Salomon Sense Ride platform for having a wider forefoot than Salomon models like the XA Elevate and Speedcross 4. One described it as, “an average to slightly wide forefoot, but pretty low volume overall. This caused some lace pressure when fully snugged up on my foot.”

Speed is where the Salomon Sense Ride GTX shines. As one of the runners on our wear-test team put it, “This is a light and fast shoe. It doesn’t feel clunky and turnover is swift and easy.” The 8mm heel-to-toe drop reminded one of our wear-testers of the way road racing flats are built (as opposed to low-drop trail shoes from companies like Altra, Inov-8 and Topo), and he said, “that’s what they reminded me of when I tried to pick up the pace on the trail too.” However, the narrow fit and lack of cushioning may mean the Salomon Sense Ride GTX is less than ideal for ultramarathons, where comfort and cushion may take precedence over stripped-down speed. One of our wear-testers concluded, “this is the shoe I’d pull out to PR on a trail 10K, but I’d be nervous about bringing it to a 50-miler.”

The Salomon Sense Ride GTX uppers are built with dense mesh mated to Gore-Tex waterproofing and overlaid with bonded (not thick stitched on) overlays. As a result, there is very little stretch in the uppers. As one of our wear-testers noted, that means the fit is really hit or miss. Runners with narrow or low-volume feet will feel locked-down by the supportive, secure uppers. Runners with wider feet or who prefer more volume will feel cramped, especially since the uppers have very little give or stretch. While the toe box is wider than some of Salomon’s other models, it’s still on the narrow side of average. One of our wear-testers was also concerned with its low height, which he found uncomfortable across his large toe. The speedlace system makes it quick to pull on and cinch down the Salomon Sense Ride GTX, although our wear-testers had some concerns about how the lacing system performed. As one runner on our team noted, “it’s difficult to get even and secure pressure, plus they don’t always stay snug, especially when they’re wet.”

While the Salomon Sense Ride GTX doesn’t have aggressive, deep lugs like the Salomon Speedcross, the outsole handles a range of terrain effectively. The lugs are all the same depth (3mm) and roughly the same rhomboid shape. Because they’re placed edge-to-edge and oriented strategically, the Salomon Sense Ride GTX handles loose dirt, slick rocks and roots confidently, even without deep, aggressive lugs. The proprietary Contragrip outsole rubber is sticky and durable, and Salomon keeps it from being too stiff by placing four flex channels all the way across the tread (three in the forefoot, one in the heel). One of our wear-testers praised the Salomon Sense Ride GTX’s agility by noting, “the sticky rubber outsole makes up for the lack of any aggressive tread.” According to his field report, he felt confident bombing up and down a variety of different trail types, from smooth groomed XC ski trail to wet, rooted singletrack. Because the waterproofing makes this a shoe designed for rain and wet weather, the sticky rubber is a strong complement.

The Sense Ride GTX uses Salomon’s Vibe midsole material, which is a combination of firm EVA foam and a proprietary Opal insert made from thermoplastic material (in the same vein as Adidas Boost). The Salomon Sense Ride GTX has a full-length Opal insert (other Salomon shoes have just a heel or forefoot insert), which feels balanced and responsive. Our wear-testers noted that the midsole feels slightly stiff for the first 2-3 runs, but breaks in really quickly after that. One wear-testers complemented the overall ride, which he described as “firm, but not in a way that feels slappy or clunky on the trail. I like the responsive, fast feeling of firm shoes, but sometimes they’re harsh and leave me feeling really beat up. I definitely didn’t get that feeling with these.”

The Salomon Sense Ride GTX is one of only two waterproof shoes in this round of testing (the other is the Inov-8 RocLite 320). Our wear-testers sought out chances to run in wet, sloppy weather, and reported that the Gore-Tex layer performs well. No shoe is going to prevent all water intrusion, especially in puddles that are more than ankle keep, but as one runner on our team put it, “they definitely kept my socks drier, longer than I expected!” One concern, however, is that the top three inches of the tongue are not gusseted or waterproofed, so there’s an opportunity for water to come in through the top of the shoe. Extending the tongue gusset further up the laces would be a small but impactful improvement.