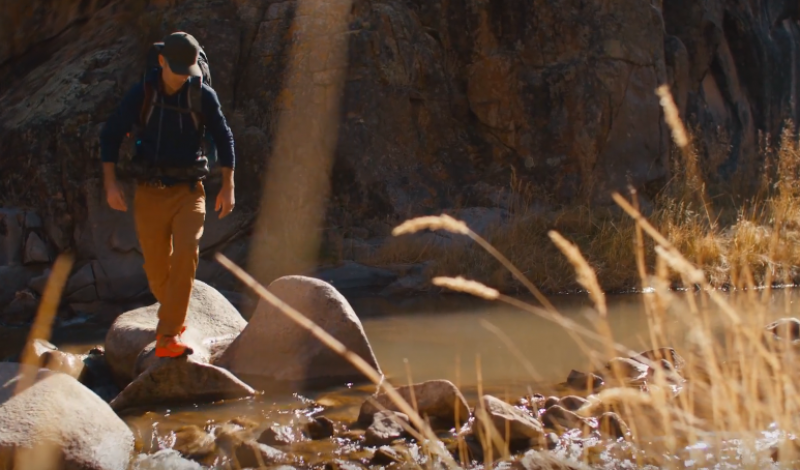 Back in the olden days (circa 2009), when the rest of the running world leaned into the minimalist movement, HOKA ONE ONE® went big. HOKA’s oversized foam midsoles and aggressive rockers attracted runners who had been disillusioned by the trend toward thin, barely-there minimalist shoes.

“The Speedgoat 4 makes the most of what works well in our other lines,” said Jared Smith, Product Line Manager of the Sky Run series. “Thick, light, and versatile.” 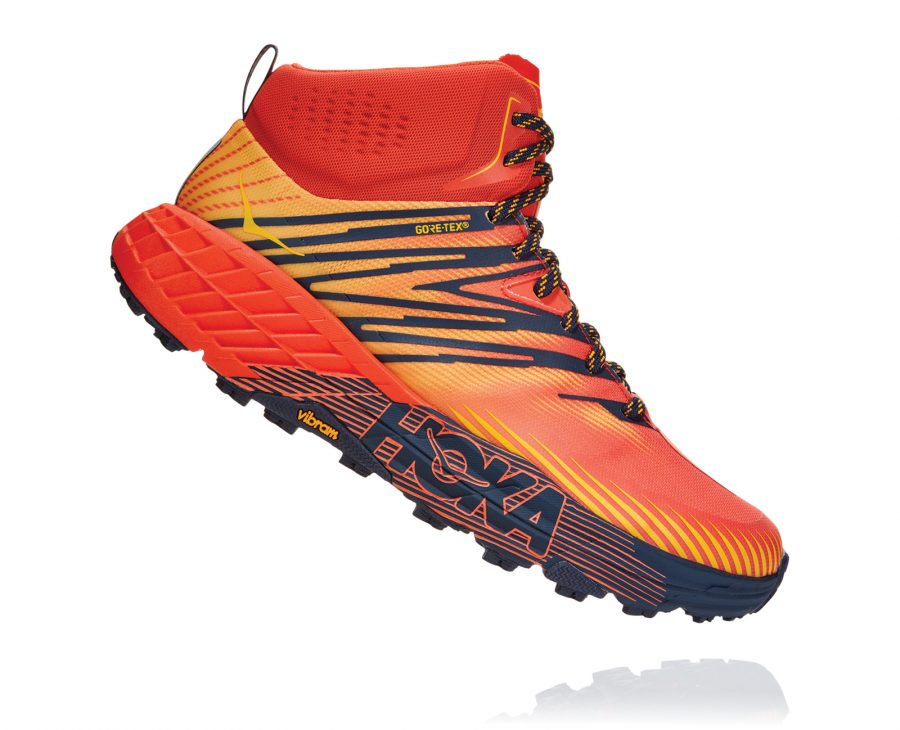 As the flagship shoe in HOKA’s new Sky Run line (think flashpacking), the Speedgoat 4 is built in two versions: a classic cushioned trail runner version and a mid-cut lightweight hiking boot, along with a waterproof version of each utilizing a Gore-Tex liner. If you know you like the feel of Speedgoat on trail runs, the mid-cut hiking boot is going to feel very familiar.

Here’s what’s going on in the Speedgoat and what makes it a powerful “utility” shoe:

A Big—but Not Too Big—Midsole

The Speedgoat employs the classic extra-thick foam midsole found throughout HOKA’s products, with a few refinements.

“For that midsole, we constantly noodle on perfect volume – we don’t want to add foam just for as the sake of it. But are looking for the perfect balance of cushioning and feel,” said Smith. 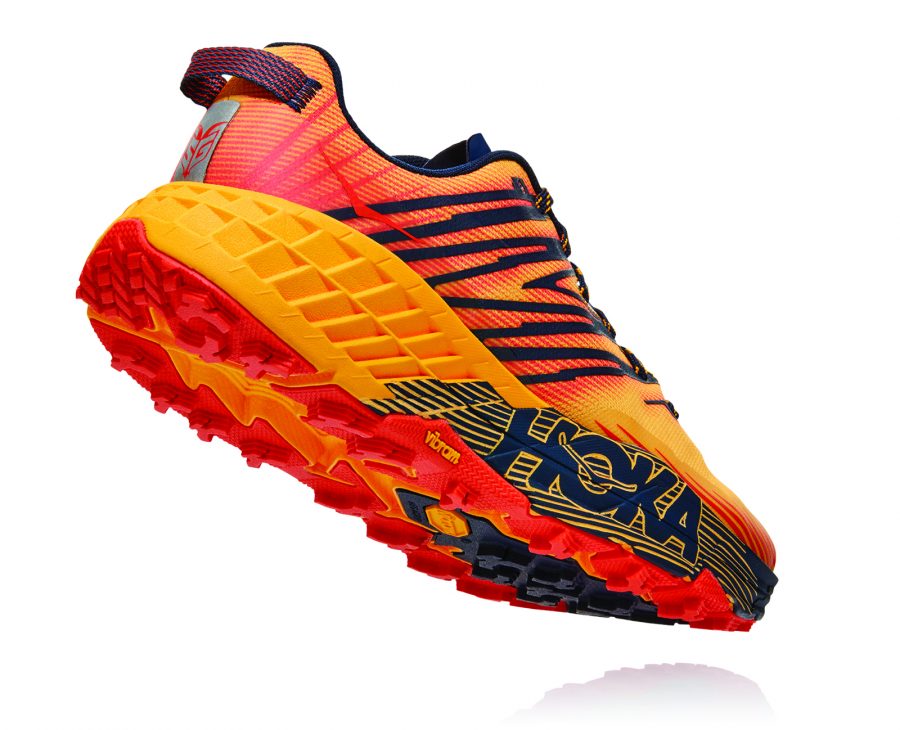 HOKA’s massive rockered midsole is one of the defining characteristics of all their shoes. Sculpted from a dual-density foam – EVA for soft, pillowy cushion in places and a rubberized foam for a more responsive, energetic feel in the forefoot – the midsole extends into the footbed, allowing the user’s foot to ‘embed’ into the top of the midsole for direct contact with the structure of the shoe underfoot.

“In engineering our midsoles, we work hard two things for the specific targeted uses: volume and cushioning,” Smith noted. “We use high grade foams which are very durable, and because we have more foam throughout the midsole, the shoes transfer the load over greater volume of foam” for less direct impact pressure.

No Shank, No Rock Plate—Just Foam

That’s one of the reasons, Smith says, that Hoka foregoes use of a traditional shank under that midsole. Another is to ensure a better control and feel on each stride. “The way the midsole is constructed, the foot sits inside the top of the midsole, so the runner enjoys more inherent stability,” he said.

That concept drives the design all Hoka shoes but was especially emphasized in the Speedgoat 4. 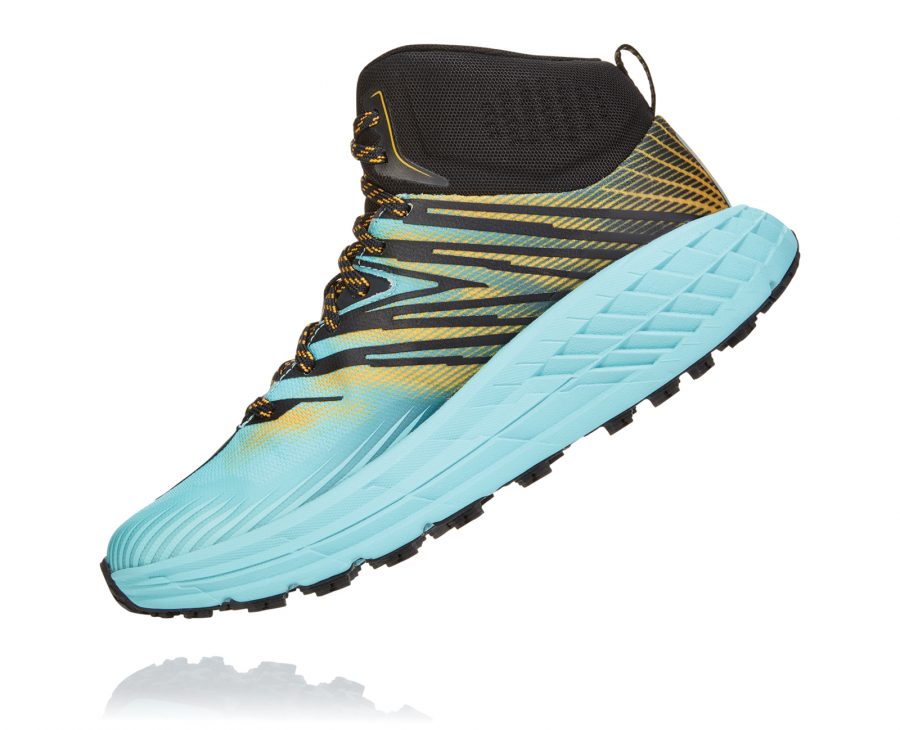 “The key tenet of our design is cushioning and support,” Smith said. “Support in terms of overall stability, on the specific terrain you are interacting with.”

A rigid or semi-rigid shank does provide some foot protection, but it also dampens the feel of the terrain. “The HOKA midsole provides enough foot protection that you don’t need a shank to protect from rocks and rough terrain,” Smith says. 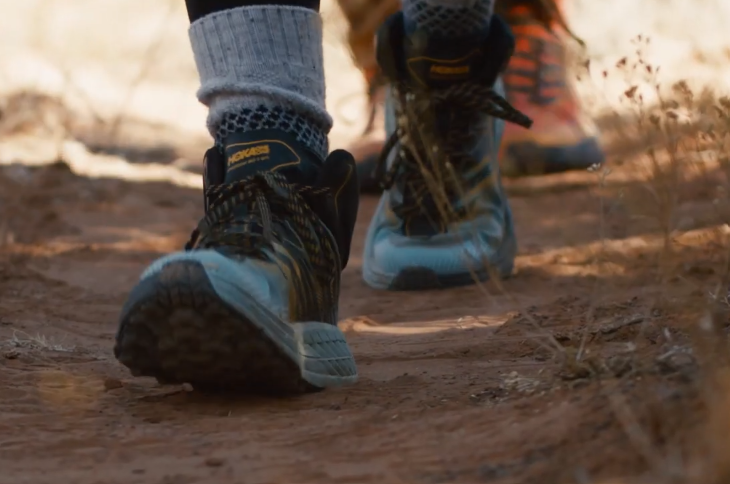 The geometry of that midsole, with its aggressive toe-to-heel curve – known as the shoe’s ‘rocker’ – also adds to the control and comfort of the shoes. “The rocker effect allows smoother transitions through the strides,” Rosario said. The rocker helps guide your foot through the heel-to-toe motion, reducing the impact force of your stride and providing added power on each push-off, he added. 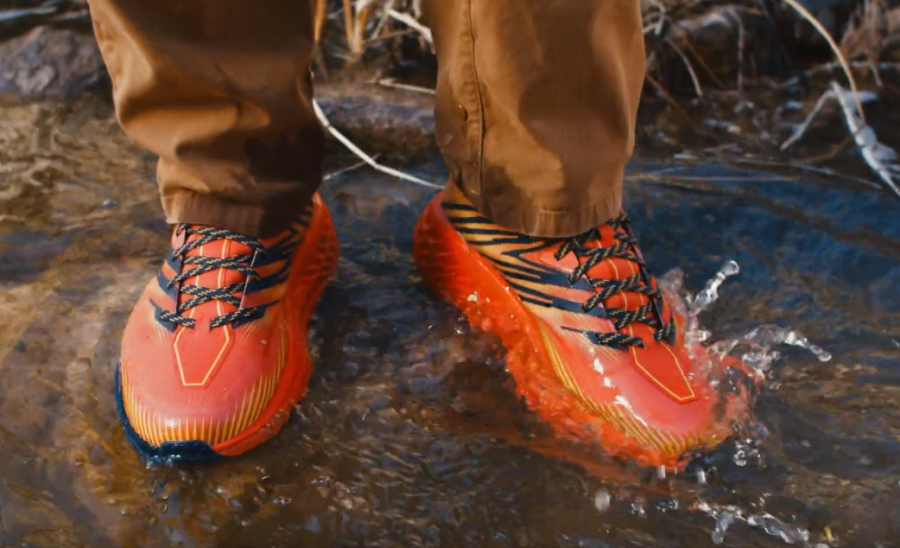 To complement the new Speedgoat 4 designs, the waterproof version of the shoe and, beginning this year, other footwear in the Sky series – Run as well as Hike – will make use of Gore-Tex liners. Previous models employed eVent membranes for waterproofing.

The switch to Gore-Tex involved several meetings and discussions between the design teams at HOKA and Gore. The year-long process eventually led to HOKA opting to incorporate Gore-Tex in the Speedgoat 4 line as well as other shoes going forward.

“We found that Gore-Tex is bringing great performance to our products,” said Rosario. “They have a very robust innovation pipeline that we can jump on.” Plus, Gore-Tex has significantly higher brand recognition than eVent, he noted, and “it’s easier for people to understand the performance characteristics of a product they already know more about.” 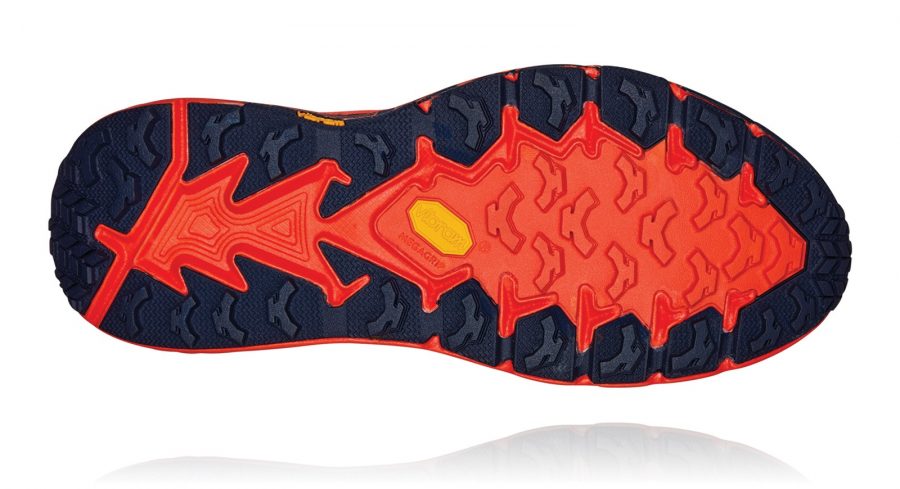 Where the Speedgoat 4 meets the road, HOKA stuck with their proven Vibram Megagrip outsole, though with some significant upgrades. This outsole, according to Smith, has earned high praise from runners of all calibers, so HOKA wanted to refine it rather than replace for use on the new shoes. The updates to the Megagrip sole were simply repositioning of lugs, and a slightly different geometry to the lugs themselves. “We moved some lugs to give better traction going up and down slopes. And the lugs themselves now have stepped sides to help them shed mud and debris without losing traction or control,” Smith said.

Finally, Smith noted during the 15 months of development of the Speedgoat 4, designers and engineers incorporated feedback from actual customers, as well as HOKA’s pro athletes for some tweaks to the overall fit of the shoe. The Speedgoat 4 shoes all feature a slightly wider forefoot box than was found on previous HOKA models.

“The feedback suggested our standard fit was a little snug right around the metatarsal head, so we opened that up just a little to give a bit more forefoot volume in the Speedgoat 4,” he said. “The fit is still purely performance oriented but now it offers a little bit more room for comfort during long runs. That added comfort should allow for better performance.”

“HOKA Sky is for everything from trail running to fast hiking – think of a performance race car that works on rough terrain,” said Hy Rosario, product line manager of the Sky Hike series. “HOKA Sky is designed to service all the different trail needs.”

And that’s as it should be.