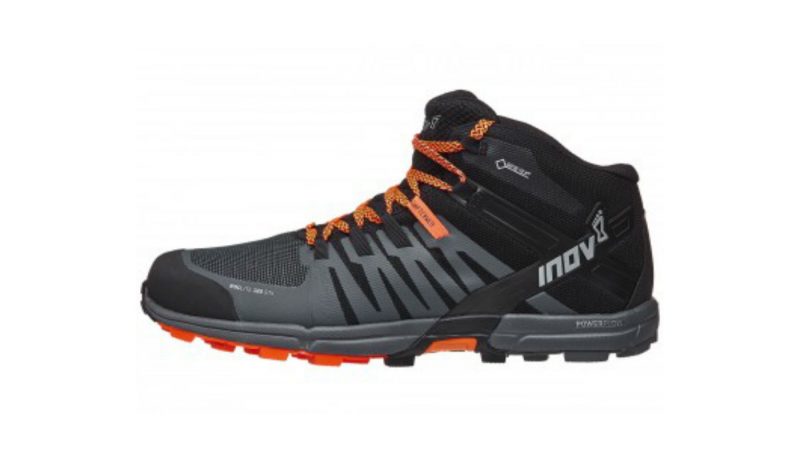 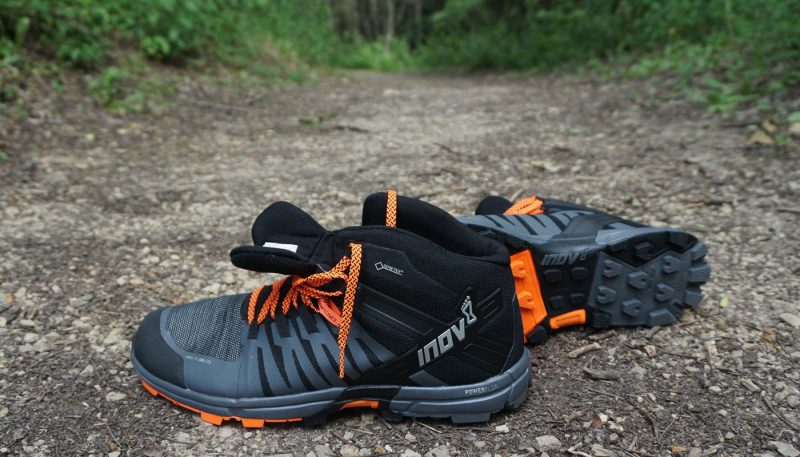 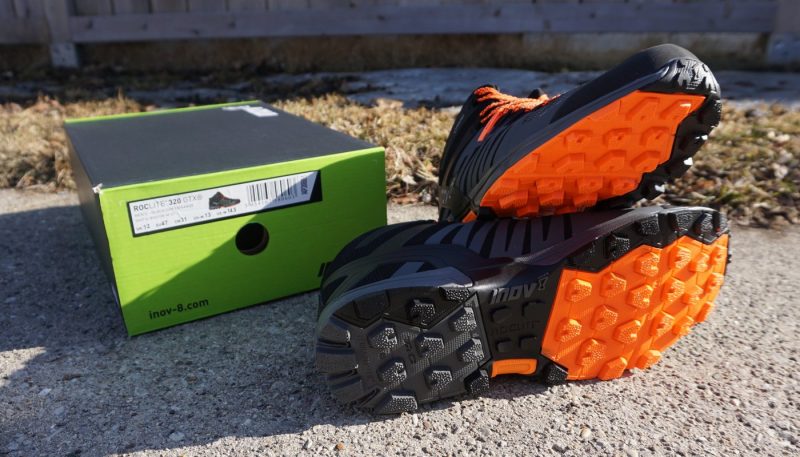 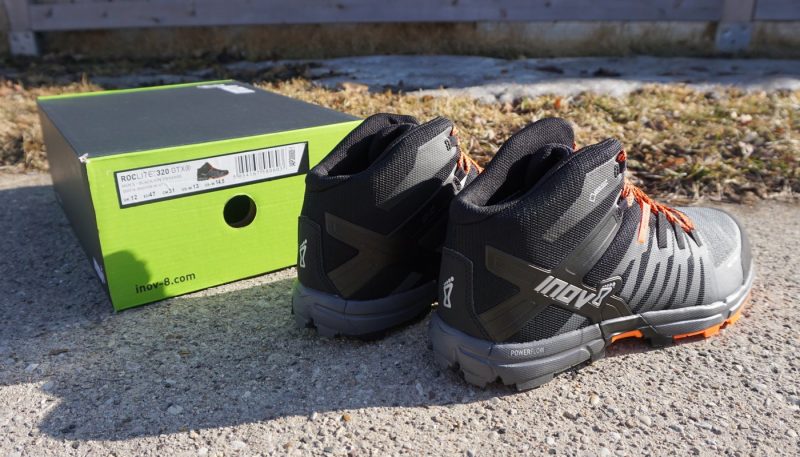 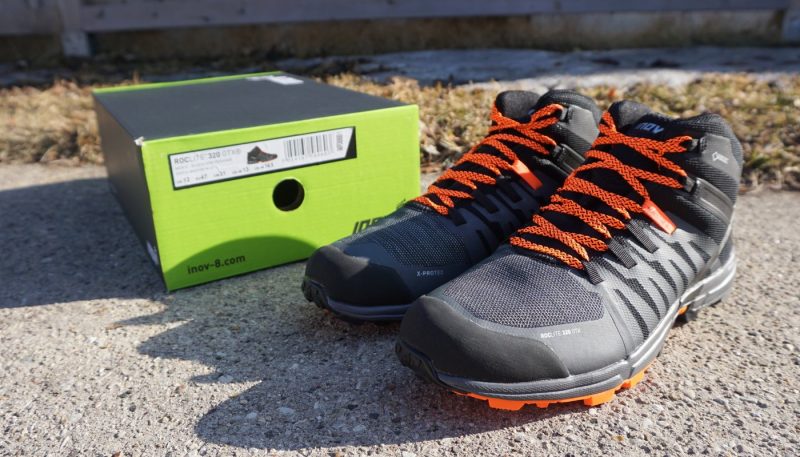 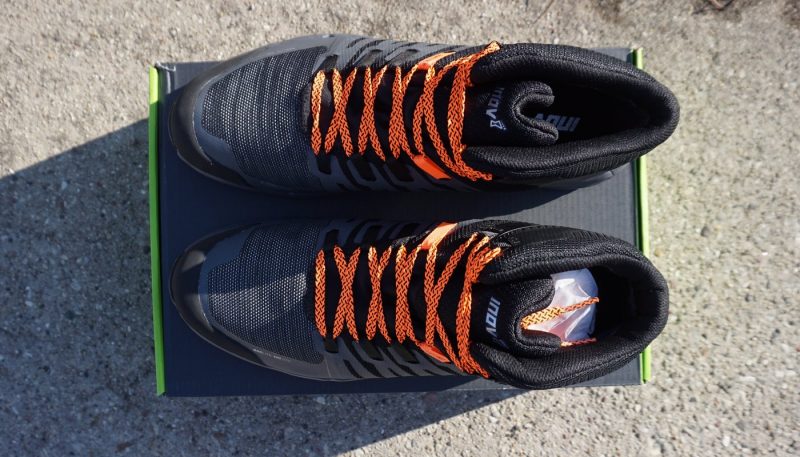 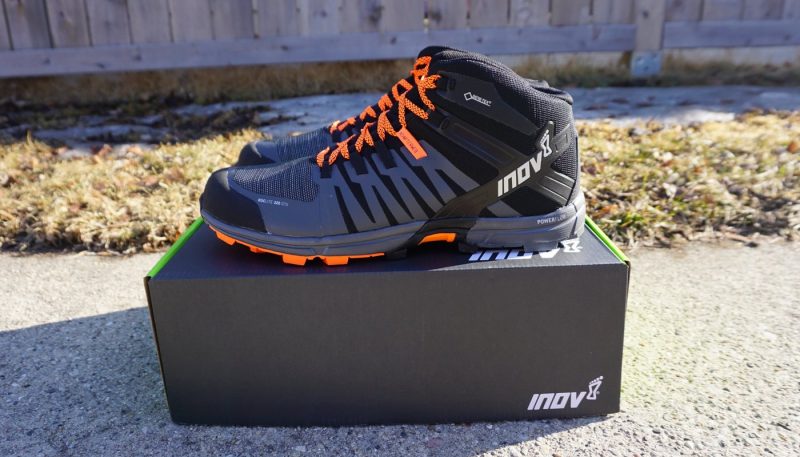 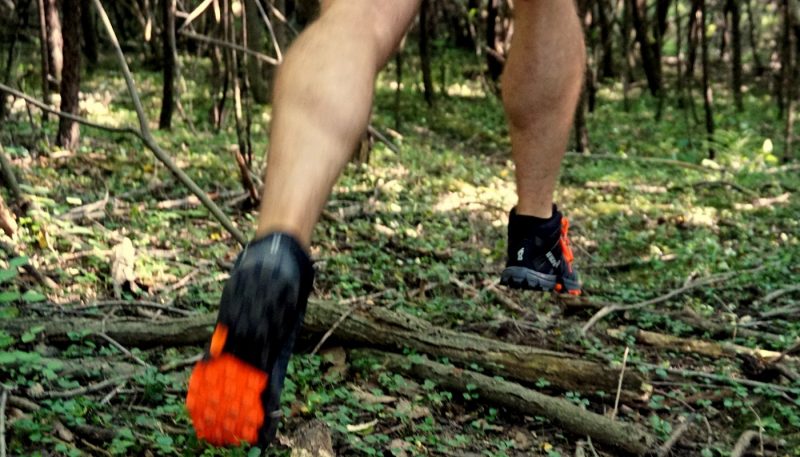 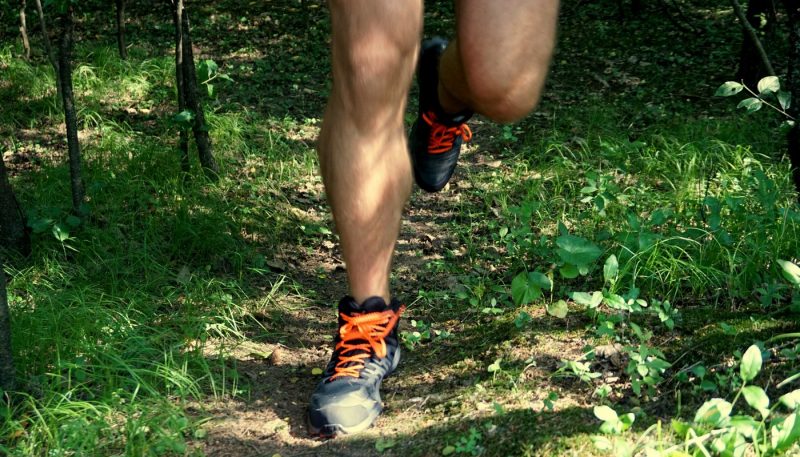 THE VERDICT
The most unique and distinctive trail shoe in this round of head-to-head testing, the Inov-8 RocLite 320 GTX is a burly, waterproof mid-top trail runner that toes the line between a running shoe and a full-fledged hiking boot. It’s brawny and durable, and there essentially no trails or conditions it can’t handle - although that may mean it’s overkill for a lot of runners. The trade-off of building that much sturdiness and protection into a trail shoe is that it’s also stiff, clunky and constrictive.
FULL REVIEW

The Inov-8 RocLite 320 GTX could nearly be classified as a fastpacking shoe or a runnable hiker. At 12.1oz for a men’s size 9, it’s the second-heaviest shoe in the group, although quite a bit lighter than expected given the mid-top construction and waterproof layer.  With a 21mm rear stack height and 17mm forefoot (4mm heel-to-toe drop), it’s the least cushioned shoe in this round of head-to-head testing. The closest low-top comparison in Inov-8’s current line is the RocLite 315, which has a 24mm/16mm heel/forefoot stack height and weighs 10.4oz for men’s size 9. Other mid-top trail running/fastpacking shoes for comparison include the new Altra Lone Peak 4.0 Mid RSM (for the Rain Snow Mud waterproof layer) and La Sportiva Uragano GTX. The midsole is made from Inov-8’s Powerflow material, which is a blended-firmness EVA foam. It’s softer in the heel for a cushioned landing and firmer in the midfoot so there’s a sturdy platform for toe-off. The Gore-Tex waterproofing is embedded in the mesh, which gives it some stiffness without the need for stitched-on overlays. The most prominent overlays are are laid out in an X pattern around the heel and up the extended collar, which adds to the stiffness and support in the shoe’s rear third. Because there are no stitched-on overlays or separate upper pieces, the inner is smooth and seamless. It’s not a booty construction because the material is firm and not stretchy, but the seamless construction prevents abrasions and blisters.

Our wear-testers were impressed with the remarkable level of protection offered by the Inov-8 RocLite 320 GTX. There was a consensus that it would be a good choice for trail runners looking for extra ankle stability, backpackers who want to move quickly through terrain, or trail runners in areas with extreme conditions. Multiple wear-testers, including one from northern Wisconsin, mentioned what a good choice this shoe would make for snowy, slushy weather. As one put it, “for a full-blown winter runner, the RocLite 320 GTX is reasonably quick, responsive and light.”

The Inov-8 RocLite 320 GTX’s heel collar and tongue are plush, and more comfortable than expected from a shoe that looks so much like a hiking boot. Slipping into them is easy, and the seamfree inner layer (made of mesh bonded to Gore-Tex waterproofing) is remarkably smooth. The low, close-to-the ground stack height made some of our wear-testers feel like these could use a more cushioned insole to compete with the plush underfoot feel of the Hoka One One Mafate EVO or Saucony Xodus ISO 3. Our wear-testers noted that the last Inov-8 builds the RocLite 320 GTX on runs short, so runners with feet between sizes will want to go larger instead of smaller. Some runners may want to go up a half-size from what they normally wear. The snug fit prompted one reviewer to write, “I would certainly suggest sizing up a half size to fit better with thicker hiking or wool winter socks.” Referring to the fit of the shoe, another wear-tester described it as “claustrophobic…not terribly uncomfortable, but there’s just no room to move.”

The Inov-8 RocLite 320 GTX is not built to go fast – unless you’re using it for backpacking and the comparison is heavyweight hiking boots. When the goal is getting around the trail as quickly as possible, it’s hard to compare the burly Inov-8 RocLite 320 GTX to comparatively featherweight, minimalist trails shoes like the Columbia-Montrail Caldorado III or Salomon Sense Ride GTX. The comparison almost isn’t fair, so our wear-testers improvised a bit. One pointed out, for example, “the RocLite 320 GTX is one of the faster winter-resistant trail shoes. These would be great for a fast run in snowy conditions or even a snowshoe race.”

The Inov-8 RocLite 320 GTX has a secure, supportive fit thanks to three elements of its design. The extended mid-top ankle wraps around to provide support without being obstructive or overstuffed with padding (an issue our wear-testers had with the original edition of the Altra Lone Peak 3.0 Mid). One of our wear-testers praised the design’s dropped achilles notch. In his words, “having that extra half-inch in the rear helps the mid-top be supportive without interfering with my stride.” Support also comes from the X-shaped brace around the heel cup,which provides a secure fit by extending up to the second lace hole as well. The other lace holes are part of Inov-8’s Adapterweb lacing system, which they call a “met cradle.” The design has echoes of Nike’s Flywire system, where the laces connect to the shoe through separate loops instead of directly through the uppers. This is intended to spread out the pressure and prevent uneven hot spots on top of the foot. One of the runners on our wear-test team thought it worked well, and reported that the Inov-8 RocLite 320 GTRX has “a precise fit that seems almost custom for my foot.”

Agility here refers to a shoe’s ability to successfully, confidently handle multiple types of terrain and trail conditions. The Inov-8 RocLite 320 GTX is equipped with a brawny, aggressive outsole for soft ground, snow, ice, and uneven terrain. According to our wear-testers, it excels in the worst conditions and plows through technical terrain. As one wear-tester reported back, “the ride is low and stable, traction is good, and weight is relatively low, which all contribute to the agility of this shoe.” Another wrote, “these shoes performed really well on wet rocks, branches, and generally subpar trail conditions.” Where our wear-testers thought the Inov-8 RocLite 320 GTX struggled, however, was on groomed trails and smooth singletrack. “Whenever I’m not scrambling up or down something technical and challenging, they’re clompy and awkward,” noted one wear-tester.

The PowerFlow midsole foam, which is softer in the rear and firmer in the front, helps the Inov-8 RocLite 320 GTX transition quickly from landing to toe-off. Our wear-testers were pleasantly surprised that a shoe that looks so much like a hiking boot felt so easy through the stride. The midsole has “pop” and “get up and go” according to one of the runners in our crew. Although it’s the least-cushioned shoe in this round of head-to-head testing, it doesn’t feel harsh or flat on the trail. Some of the responsiveness comes from Inov-8’s efforts to alleviate it, including flex channels on the forefoot and a three-pronged rockplate that can flex and move independently (rather than one solid piece that acts as a solid shield).

One of our wear-testers reported that the Inov-8 RocLite 320 GTX “deserves a gold star” in this category. As he put it, “not only is it waterproof and a mid top, but it has numerous overlays to keep the foot in place and protect during lateral movement. The deep lugs and rubberized toe guard are beefier than most I’ve seen.” Another praised the outsole for its durability and noted that the upper also “felt extremely durable and resistant to branches or rocks. Probably the best protection out of all the shoes in this test.”