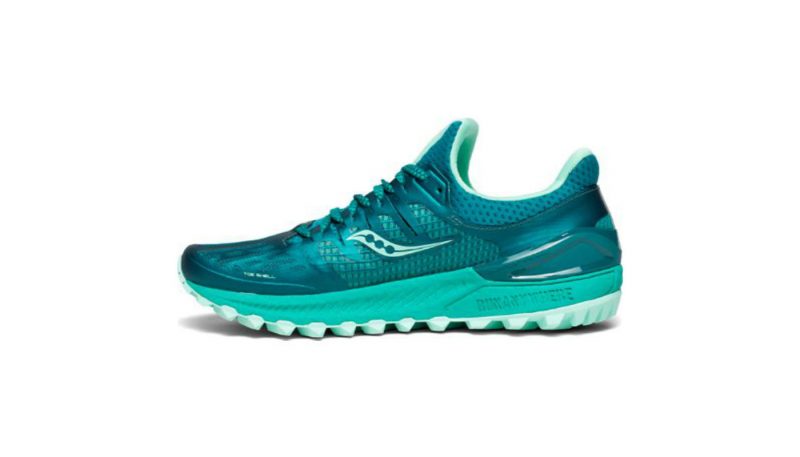 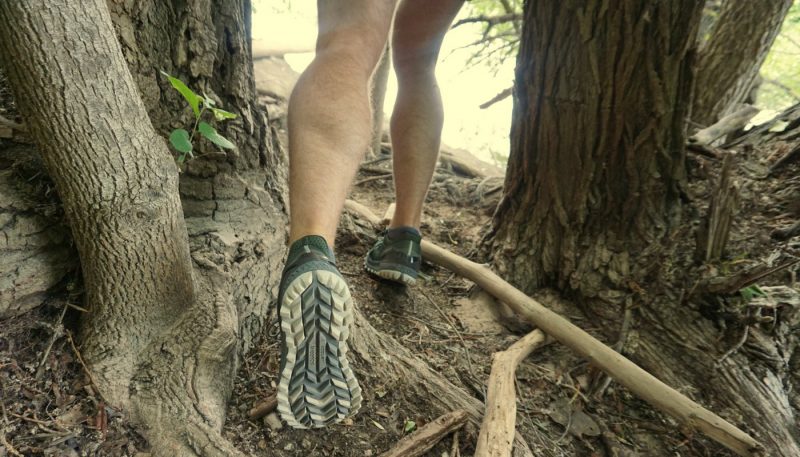 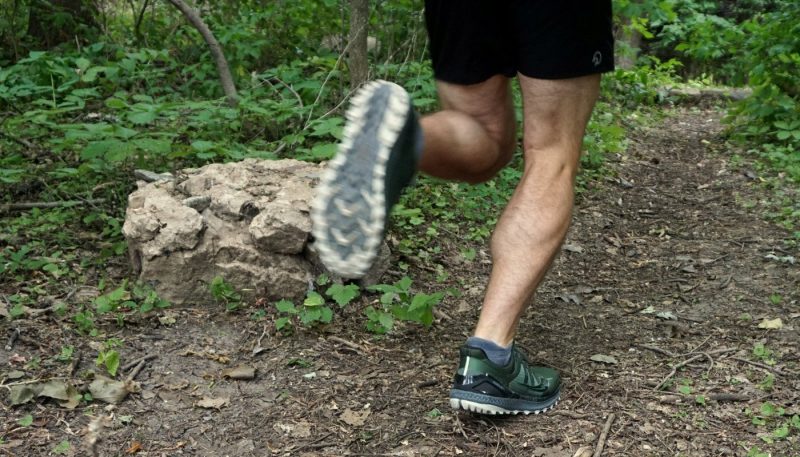 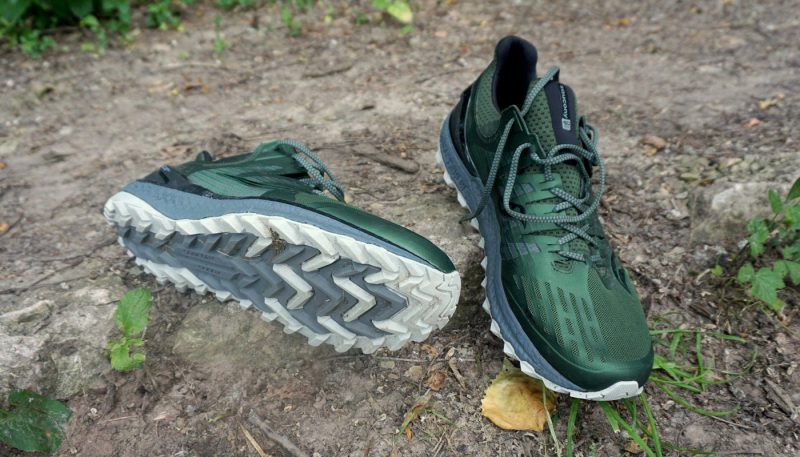 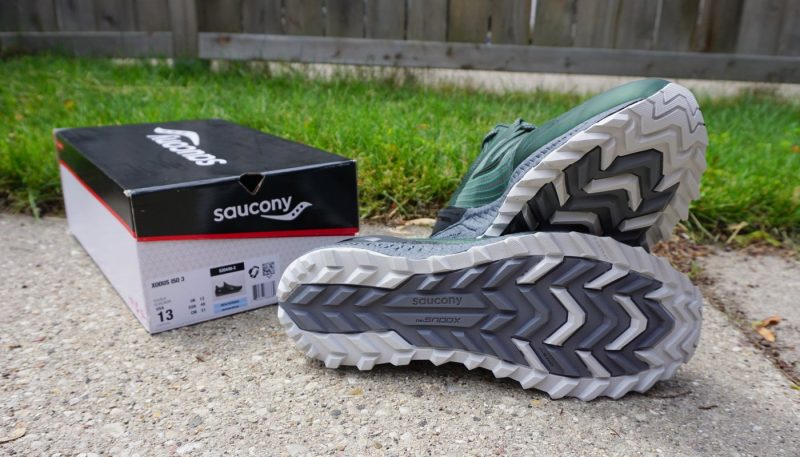 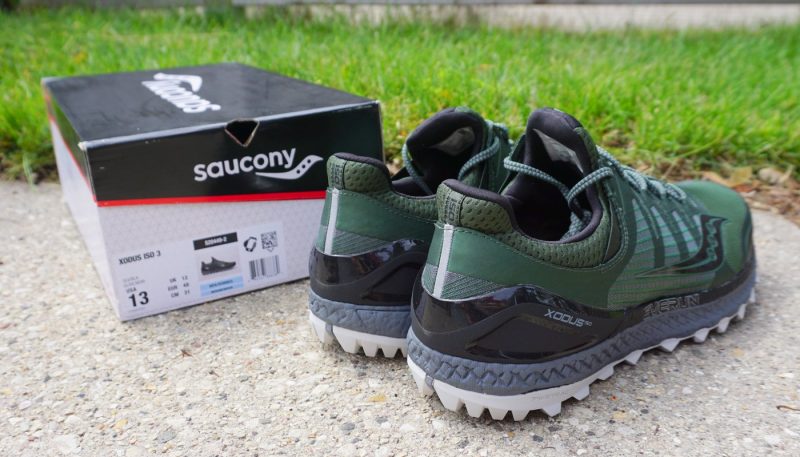 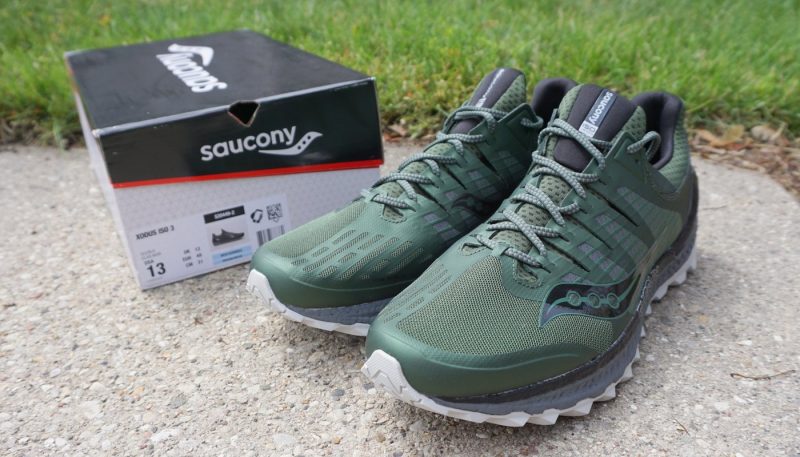 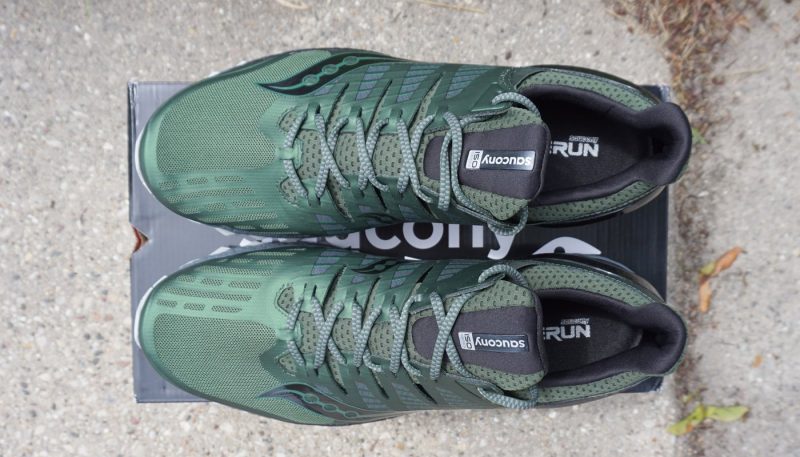 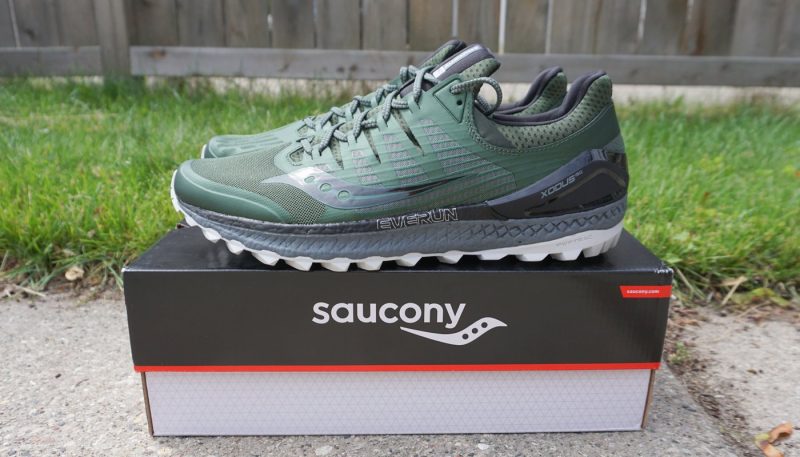 THE VERDICT
The Saucony Xodus ISO 3 is a durable trail runner that our wear-testers described as “bombproof.” There are major, bottom-to-top updates from last year’s Xodus ISO 2, including a totally redesigned upper and a full midsole made from Saucony’s responsive EVERUN (the same material as the Saucony Freedom and Liberty road shoes). Our wear-testers found the Saucony Xodus ISO 3 extraordinarily responsive and comfortable, and praised the durable, sticky outsole. However, the Xodus ISO 3 tips the scales at 12.9oz (for men’s size 9), which made it the heaviest shoe in this round of testing. One described it as “lumbering.” The weight worked against what would have otherwise been a Best in Category trail shoe.
FULL REVIEW

The Xodus ISO 3 is the third iteration of Saucony’s popular all-terrain, well-cushioned trail shoe. It’s the most cushioned and protective trail shoe in Saucony’s line, and sits just above the Peregrine 8, Koa TR, and Koa ST. With a 27mm rear stack height and 23mm in the forefoot (4mm heel-to-toe drop), it’s just below the Hoka One One Mafate EVO as the most well-cushioned shoe in this round of testing. The third version of the Xodus retains the ISO fit system around the midfoot and arch, which our wear-testers found to be secure and reliable. The uppers lose some overlays but gain a booty construction, and the new Saucony Xodus has the same sticky PWRTRAC full-coverage outsole as the previous edition. By far the biggest change is the midsole, which now uses full-length EVERUN foam, the same material as Saucony’s popular Freedom and Liberty road shoes. The previous version only has an EVERUN topsole.

The updated EVERUN midsole makes the Saucony Xodus ISO 3 one of the most responsive trail shoes in this round of testing. As one noted, “these have great energy return and toe-off.” Our wear-test team had just as much praise for the grippy, full-coverage outsole and comfortable upper, which has a stretchy, glove-like full-lengthy booty. The PWRTRAC outsole is made with a sticky rubber that performs well in wet and dry conditions, and the aggressive lugs are designed to bite into loose dirt and move confidently across rocks and roots. One wrote, “When I put these on in the morning, I feel ready to tackle any trail. I felt confident hurtling myself downhill and climbing up slippery singletrack too.”

Our wear-testers had a range of minor quibbles with the Saucony Xodus ISO 3, mostly based on personal preferences. One noted that the booty’s extended tongue made the shoe hard to put on quickly, while another observed that she had trouble keeping the laces tied when they were wet. Another experienced some slippage in the low-slung heel cup, and wished the rear of the shoe extended up the achilles a bit further. However, every single wear-tester mentioned the weight of the Saucony Xodus ISO 3, which is the heaviest shoe in this round of testing (even heavier than the mid-top, waterproof Inov-8 RocLite 320 in the same size). As one observed, “the weight and mass of this shoe really hurt it, since it takes some mighty guns to fling this monster around.” Saucony’s proprietary EVERUN foam is notoriously heavier than the materials other companies use in their midsoles, and runners will need to decide if the responsive ride is worth the additional weight. Our wear-testers rated the Saucony Xodus ISO 3 very highly overall, but it would have been the top shoe in this round of testing if it weighed closer to the middle of the range instead of at the top.

Right out of the box, the Saucony Xodus ISO 3 feels plush and comfortable. “This shoe is all cushion,” raved one of the runners on our team. Another one of our wear-testers said he could have closed his eyes and convinced himself he was sliding into a broken-in pair of slippers. The comfort comes from a well-cushioned, glove-like upper in a booty construction. The built-in tongue (actually part of the booty) rises higher than the heel cup, which is probably not necessary but looks striking and aggressive, similar to the Nike Pegasus 35 and Adidas Ultra Boost. The heel collar is similarly padded and plush, and other than one wear-tester who reported some trouble sliding his foot through the opening of the booty (“like putting on a wetsuit,” he said), the Saucony Xodus ISO 3 received unanimous praise for its comfort.

“A tank” and “lumbering” were some of the words our wear-testers used to describe the Saucony Xodus ISO 3. One noted that, despite the substantial weight, the Xodus ISO 3 “has a nice easy turnover at moderate speeds,” although he explained further that the weight affected how speedy the shoes felt more and more as the miles on the trail piled up. This sort of weight-related fatigue wasn’t something he noticed with the moderate-weight shoes in this round of testing, like the Salomon Sense Ride GTX (11.2oz for men’s size 9) or Adidas Terrex CMTK (12.0oz for men’s size 9). The most positive comment came from a wear-tester who said they didn’t feel as slow as she thought they would, given how heavy they felt on her feet.

The new Xodus ISO 3 is built with Saucony’s ISOFIT upper, which is being used on more and more of the road and trail line (the Saucony Ride ISO is the newest model to move away from a traditional upper and into an ISOFIT lacing system). Saucony describes ISOFIT as a, “soft inner sleeve and floating support cage,” with the lace holes through the upper part of the supports. Our wear-testers had high praise for how secure their feet felt in the Saucony Xodus ISO 3. One reported that it moved with her without hampering her movements, and allowed her to adjust the laces as tight or loose as she wanted without feeling like her feet were being strangled or the shoes might fall off. This is particularly important in ultramarathons (when feet will swell throughout the run) or when the shoes might get wet (and they need to be tightened down to stay secure).

The PWRTRAC full-coverage outsole is a winner, and it’s no surprise Saucony carried it over from the previous Xodus with virtually no changes. The edge-to-edge lugs are 5mm deep and arranged in a series of parallel v-shaped rows, which grips the trail well even when footing is questionable or uncertain. One of our wear-test runners reported, “navigating tricky terrain was a breeze, and the sole gripped everything easily. Even in a steady downpour, I was able to navigate trail obstacles with easy.” Another wear-tester noted, however, that the EVERUN midsole made the Saucony Xodus ISO 3 noticeably bottom-heavy, and he felt like he was swinging his feet like pendulums rather than deftly striding through singletrack.

This is one of the strongest categories for the Saucony Xodus ISO 3, and it’s up to trail runners to decide for themselves whether the top-of-the-line responsiveness they get with the full EVERUN midsole is worth the weight penalty it comes with. Our wear-testers were divided on that. One described the Saucony Xodus ISO 3 as “incredibly responsive with great energy return,” and worth the extra weight. “I have to say I was impressed with the springiness of the midsole. A good balance of cushion and spring,” observed one of our other runners. Another member of the team described them as responsive on the trail, “but lumbering at best.” According to him, the Saucony Xodus ISO 3 felt more like “a low-top hiker with a running shoe look.”

“This is a tank of a shoe,” concluded one of our wear-test runners. “Bombproof” wrote another. The Saucony Xodus ISO 3 has an stiff wraparound heel counter and integrated toe bumper (seamless, not stitched on top, which one of our wear-testers specifically called out as a positive update). The ISOFIT wings that wrap around the medial and lateral sides of the midfoot are both protective and laterally supportive. The booty construction also effectively prevents small pebbles and trail debris from getting into the body of the shoe, although runners who prefer to use gaiters won’t find any built-in hooks or Velcro (a feature on both the Brooks Cascadia 13 and Altra Lone Peak 4.0). Underfoot, one of our wear-testers noted, “with thick cushioning and deep lugs, the Xodus ISO 3 is as protective as they come.”