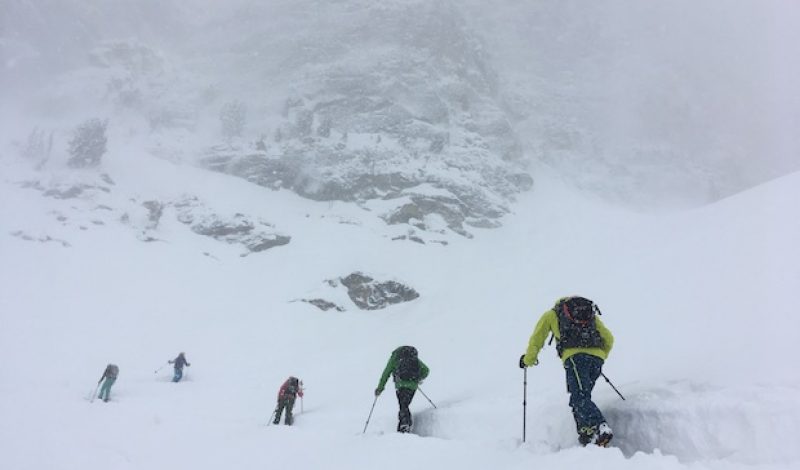 It was a stormy day on Colorado’s Front Range when a group of us gathered at the Colorado Mountain School in Estes Park early one February morning. The snow had been stacking up all night long and while it caused some serious stoke, it also warranted some caution as we dug into the avalanche forecasts and started to plan our day in Rocky Mountain National Park.

We had been invited this pristine mountain setting by Italian ski boot maker Scarpa along and Canadian ski and snowboard equipment manufacturer G3 (Genuine Guide Gear), to test out some of their latest kit set to hit stores in the fall of 2017. The flakes were fat and fell thick among us as we checked our avalanche beacons and turned towards Bear Lake. The conditions were prime for testing and we were eager to get moving. As our crew headed to Emerald Lake and up the apron that sits below Dead Elk and Dragon’s Tail Couloirs. A small natural sluff broke free and rolled down the slope. It was a gentle reminder to stay sharp.

After a day of testing in the field, here are some thoughts on the gear that these two brands have in store for us.

These men’s (Maestrale) and women’s (Gea) boots are each five ounces lighter than the previous versions, yet somehow they are stronger for it. Scarpa used a carbon fiber-infused Grilamid web frame shell in the rear of the lower boot and a Grilamid cuff to increase stiffness and the boot’s range of motion. They also incorporated their Axial Alpine Evo tongue, which blends the power of overlap construction with the ease of entry of cabrio style boots. As someone with a high instep (not to mention a high arch and wide feet), it was noticeably easier to get in these new models when compared to others on the market. For me, the only strike against the revamped Maestrale is the fit is slightly narrower than previous versions. Obviously, that’s great for those of you with narrower feet and if Scarpa boots have felt a little wide in the past, it’s time to give these a try. But as someone with wide feet, it was somewhat confining. 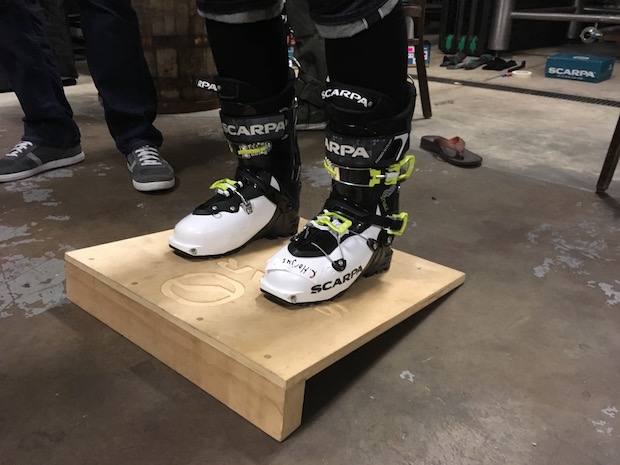 Another clever feature is the new Z-shaped cable Wave Closure System for the lower boot. To shed a buckle, Scarpa paired the boot down to a single buckle attached to a cable wrapped around some pulleys. This provides equalized tightening across the forefoot and saves the weight of that extra closure.

My final note (though, there are still many other features to dig into) is on the new Intuition liners. These inserts use four different densities of foam and can be (should be!) thermo-molded to precisely fit your foot. In my case, that requires quite a bit of work to make enough room for my fat foot. That said, it’s worth the effort for the performance, support, and the warmth that comes from both a proper fit allowing good circulation and the insulating nature of the foam itself.

The team at G3 has switched from using ABS plastics for the ski sidewalls to Polyurethane (PU) polymer to help reduce the chatter that often plagues carbon skis. To be fair, the conditions we were in on this tour didn’t really help to test that. The snow was deep and soft, albeit a touch on the heavy side—though not quite wet. If there was anywhere on this tour where chatter could have been a problem it would have been on the well worn trail used by many other skiers and snowshoers between Nymph Lake and the parking lot. But I didn’t experience any chatter on that stretch, which was nice, but not very conclusive.

It’s also believed the PU is a bit tougher than the ABS used, which will increase core and edge durability and provide better resistance to damage from rocks. The rest of the ski construction is with a poplar/paulownia blended wood core, four layers of carbon fiber and two full layers of titanal aluminum. It also has a low friction nylon topsheet to resist snow from sticking and making the ski heavier for the climb. Again, the conditions were not really prone to snow being sticky enough to collect on the topsheet, and hence, it didn’t. The skis felt great on the uphill as well as while coming back down. I didn’t find they floated as well as my DPS Wailer Tour 1’s, which are also 112 underfoot. The float comparison is slightly skewed due to the Tour 1’s being slightly wider at the tip at 141 and longer at 178 compared to the SENDr’s 139 tip and 174 length. Still, the new G3’s were very responsive getting into and out of turns in our knee-deep powder testing grounds. 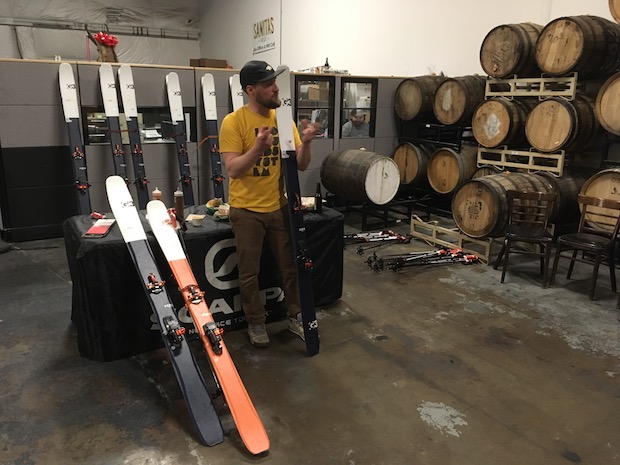 Other new offerings from G3 are their Men’s and Women’s ROAMr skis with similar construction as the SENDr’s minus the carbon in the layup. They run a little heavier but are about $300 less expensive. SENDr and ROAMr skis will be available in the fall of 2017. Watch Genuineguidegear.com for more information.

Quick on the heels of G3’s new Scala skins released last fall come the improved Scala LT, which are a lighter version of the originals. If you’re not familiar with these skins, the Scala concept uses G3’s Alpinist plush but with an extended and scaled TPU tip connector. The idea being that the first eight inches of the skin from the tip desn’t do much in the way of helping grip the snow on the climb, but when breaking trail, added plush on the front portion causes resistance to the ski gliding forward. But add the resistance up over the number of steps taken and there might be a significant amount of resistance that could be avoided to reduce some fatigue. The shape of the tip is also designed to minimize snow from sneaking under the skins to wear away at the glue. While we didn’t get to cut our own skins for this trip on the SENDr’s, I did receive a set to cut for my skis and that process was a breeze with the included trim tool. 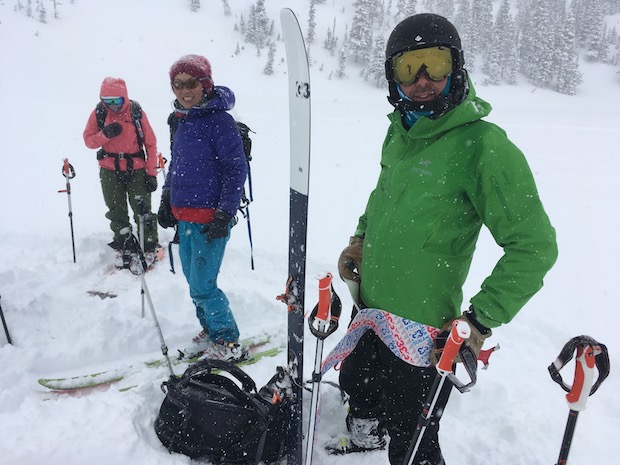 Once again, this tour on it’s own wasn’t long enough to really tell how efficient these skins were at gliding or breaking trail. But they did grip the snow nicely on steep ascents, held well to the skis, and were easy to transition with, especially when paired with a set of G3’s Love Glove sleeves ($29). 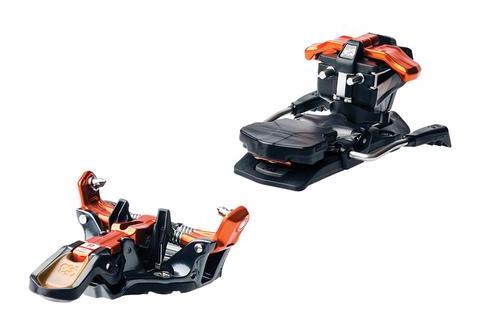 Our SENDr skis were mounted with G3’s Ion binding. This binding has been around for a few years now but is still a solid choice for AT kits. It was my first time using the bindings and the promise of being able to quickly and easily click in rang true. Two small plastic pieces guide the boot to just the right spot for the tech binding jaws to clamp in. The flip style heel risers are easy to set or remove as needed. The only issue I ran into was having the heelpiece rotate back into the ski position somehow while I was clicking my toe in and I suddenly found my heel locked down. This may have been user error on my part and it didn’t happen while I was actually touring. I feel like I must have accidently kicked it while getting my toe in place. 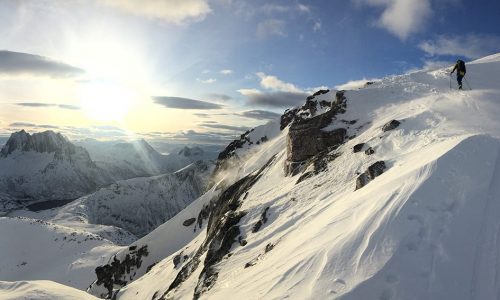