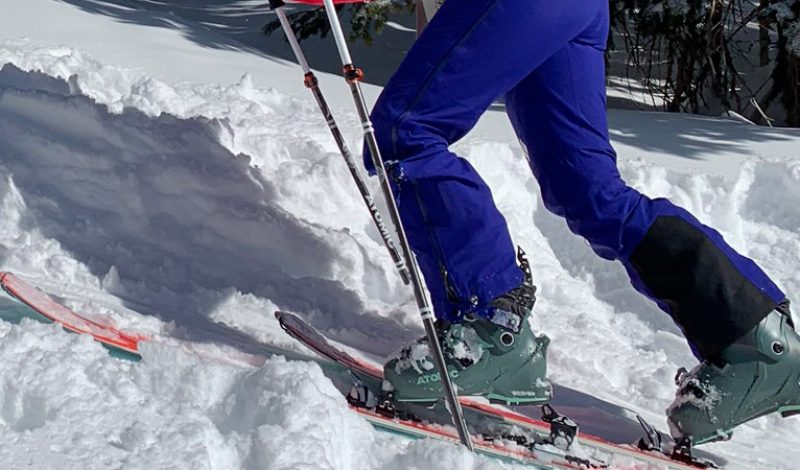 Alpine touring becomes more popular each year with more skiers heading into the backcountry to find pow stashes and more resorts allowing uphill traffic. One problem skiers ran into was the excessive gear — you used to need a completely different setup for touring than the one you had for lift-served days.

Over the past few years that distinction has become less distinct. Companies from both the touring world and the alpine world have gravitated toward equipment that is both uphill capable and sufficient for inbounds, downhill skiing. But issues were still prevalent — equipment was either too heavy, or complicated to use — some boots worked with alpine bindings, while others didn’t, and some didn’t have tech inserts. Striving to provide solutions to these issues, Atomic is introducing their new Hawx Prime XTD line of boots in fall of 2020.

Boots are primarily about the fit. If a boot doesn’t fit, it doesn’t matter what kind of features it has, its weight or how it skis. Atomic has absolutely nailed the fit with the Hawx Prime XTD line. Their new Mimic liner is a heat-moldable liner technology that precisely fits to the nuances of your foot. The liner features a soft, moldable foam, as well as a more rigid plastic on outer parts of the liner that mold to both your foot shape and provide support and protection from possible boot construction hot spots. Additionally, in the XTD models, the shell itself can be heat molded to adjust the 100mm last, providing the ultimate custom fit. I’ve got a high arch and wide forefoot. Finding a boot that fits well can be a problem for me, and my Hawx Prime XTD’s feel like ski slippers after the custom fitting process.

The Hawx Prime XTD’s are based on Atomic’s Hawx alpine boot, providing excellent alpine performance in 130, 120, 115, and 95 flex options. But they also include a walk/ride pivot system that gives 54 degree range of motion that made uphill mode nearly indistinguishable from my Scarpa Maestrale’s. But what’s really impressive is their low weight (my 27.5, 130’s weigh in at just 3lbs 10oz / boot) and their ability to charge down the hill.

In addition to a custom fit and versatility, the Hawx Prime XTD’s feature compatibility with a wide range of both tech and DIN bindings. Whether you’re looking to snap into your lightweight Dynafit’s or a standard downhill binding you’re covered with the Hawx Prime XTD. And if you want to kill your entire quiver you may want to take a look at some Shift bindings.

My gripes with the Hawx Prime XTD? I do miss a full Vibram sole that many touring boots have for traction when boot packing, and just strolling around the parking lot etc. I also wish they were a bit easier to transition from ski to walk mode – you’ve got to kind of lean forward and then back and pull on the lock mechanism at the same time to get it to release. Maybe the lock will loosen up more as I break them in or maybe I’ll just get more used to that motion.

In summary, these boots are the first I’ve truly felt can rip downhill and still tour with the best of them. They’re 6oz lighter than my old Atomic Waymaker Tour 110’s, have a wider range of motion, fit better, and feel like a 130+ flex. They may just be the one boot quiver you’ve been seeking.