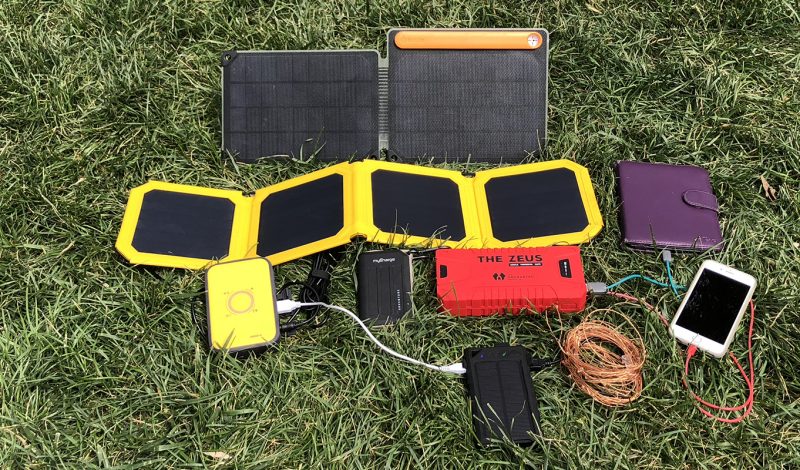 If you haven’t been the lucky recipient of one of those mediocre-at-best travel chargers that companies have started handing out en masse as promotional swag, consider yourself lucky to avoid the clutter. The point is, travel chargers are everywhere now, and they’re far less expensive than the bricks up for sale when smartphones first started becoming popular.

Depending on whether you’re heading out backpacking, car camping, teardrop trailer-ing, road tripping, or otherwise traveling without readily available outlets, there are tons of chargers tailored to keep your USB based electronics humming along.

Charging your gear directly from the sun has a major pro and a major con. Pro: You’re not tied to a battery pack that’s dead weight once it has run out of power. Con: You don’t have a battery pack buffer if the sun doesn’t come out to play.

Wakawaka’s Solar Panel is beefy and strings four 2.5 watt panels together for 10 watts of solar absorbing power. On a five-day camping trip in the Moab area in March, I left the panel unfolded on top of my tent but under the orange rain fly, with the cord running inside my tent connected to the Solar Link, Wakawaka Power 10 (see below), and my completely dead Kindle. When I got back to camp later that afternoon, everything was fully charged from starting out at no power. I was somewhat amazed considering other solar chargers I’ve used require quite a bit of rearranging so the sun hits them just so. This is Wakawaka’s only standalone solar panel and requires the Link box to provide to USB-A ports. 1.8 lbs | $100 | waka-waka.com 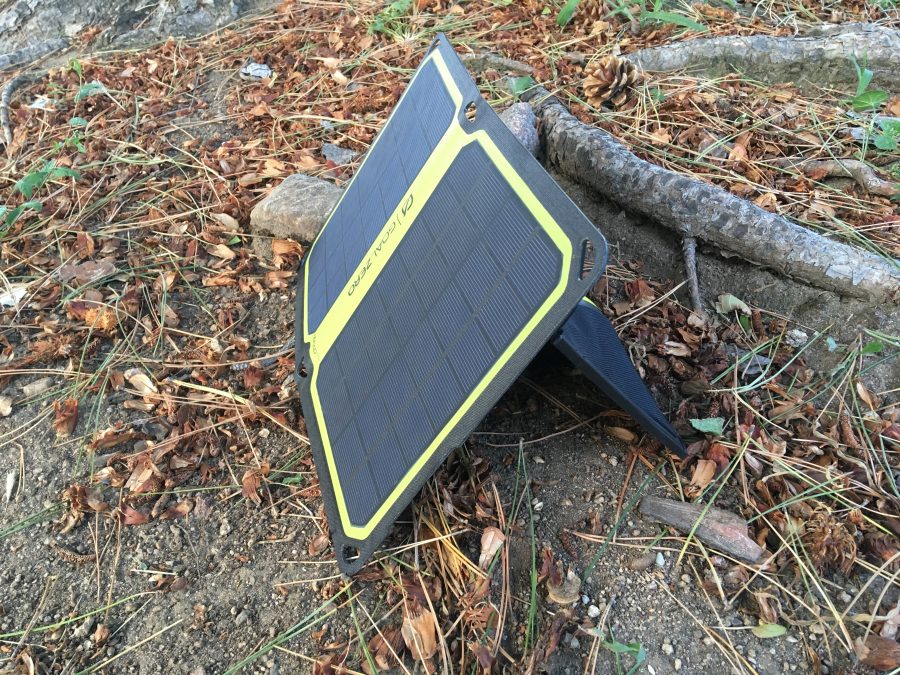 Gram counters willing to sacrifice three watts of absorbing power for half the weight compared to the Wakawaka Solar Panel & Link can look to Goal Zero’s Nomad 7 Plus Panel which is very durable and rain/snow proof to handle hanging on the outside of the tent. The Nomad 7 Plus comes with a little junction box that stores in the built in zippered mesh pocket to convert the 2.5mm plug to a single USB-A charging port. The box includes a solar strength indicator to help you aim the panel to get the best possible angle (with the built in kickstand) and the kickstand and mesh pouch are removable to shed a few more ounces. The Nomad series comes in a number of sizes. 17 oz / 12.5 oz (w/o kickstand) | $100 | goalzero.com

To keep things simple, the below products have combined a solar panel and a battery reservoir into a single unit—no messing with cables or trying to balance two things on a rock or dangle a battery pack by the cord.

The Day Tripper works like a charm when there’s plenty of sun, but it has one major limitation: Once you run out of juice, you need to jumpstart the battery with an electric charge before it can start storing solar battery power. So, be aware of the lights warning you how much power is left if you take this out on an adventure—stop recharging your gear immediately if it appears you’re about to suck the battery completely dry.

If you can remember that and follow that key rule, the Day Tripper is an excellent trail companion, as it’s lightweight, hangs from your pack with a carabiner, and has a powerful LED light on one side. The Day Tripper comes in either a 6,000 or 8,000 mAh version and the solar panel is a 120 mAh solar cell with two USB-A ports. 7.1 oz | $50 | revelgear.com 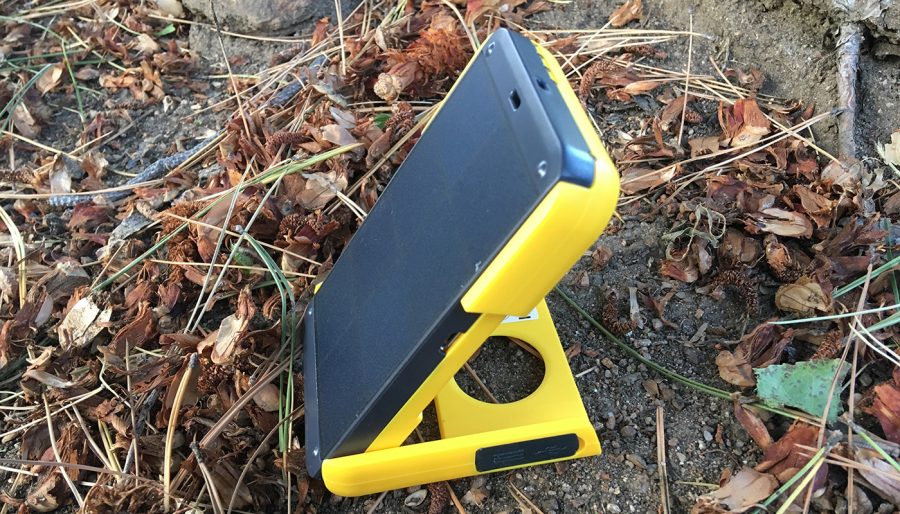 With a built in stand, the Power+ can be angled to get the best angle to charge from the sun. It also has two 110 lumen LED’s for use after the sun is gone. It was designed for use in developing areas where narrow mouth water bottles and jugs are common and it has a hole in the stand that slips right over the top of bottles like that. It also has a loop to hang it from your pack when on the go. It doesn’t have the issue with needing a jump-start after draining the battery like the Day Tripper but the built in battery is smaller at 3,000 mAh with just one USB-A port and a 1,050 mW solar cell. 7 oz | $60 | waka-waka.com 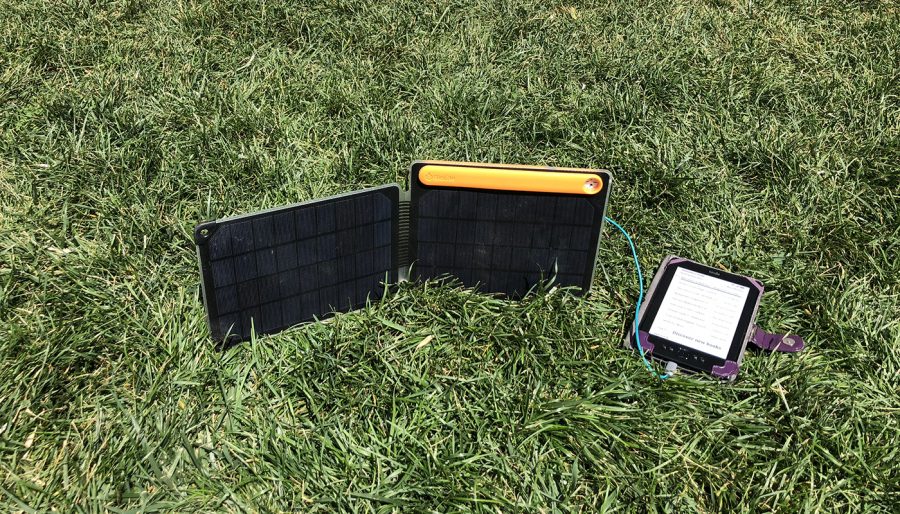 While BioLite’s Solar Panel 10+ is a bit finicky in less-than-full sun, it charges it’s 3,000 mAh internal battery lightning-fast in broad daylight. I brought it along for six days of hiking on the Jordan Trail in May and strapped it to the outside of my pack most of the time. Quite a few other folks on the trip juiced up their phones at one point or another, as we were all constantly taking photos. With only one USB-A port, you can’t charge multiple devices at a time like you could with the Waka Waka panel and Solar Link or Day Tripper. 1.25 lbs | $130 | bioliteenergy.com

If that sounds like an unflattering name, it’s because it is—these are chargers that have one purpose only (charging your stuff) and they turn into dead weight once you’ve sapped all the power. But there is a time and place for bricks. Without a built in solar panel they can be much smaller and lighter-weight than other options, thus lending themselves the most portable of all. Most of them can be paired with a solar panel for use on the trail or they can be charged by being plugged in at home or in the car. 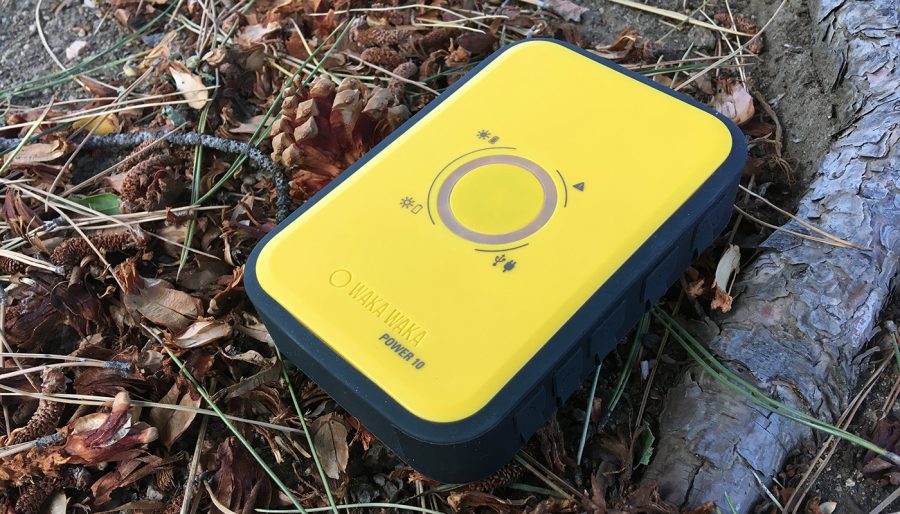 The rugged Power 10 holds epitomises the brick form at a stout one inch thick, five inches long and three and a half inches wide. It can hold 10,000 mAh of juice and can be charged either by a USB Micro-B port or the Wakawaka style solar port. All of the ports have silicon covers to help keep out moisture and grime and it provides three USB-A ports to charge from to share the charging love. 10 oz | $70 | waka-waka.com 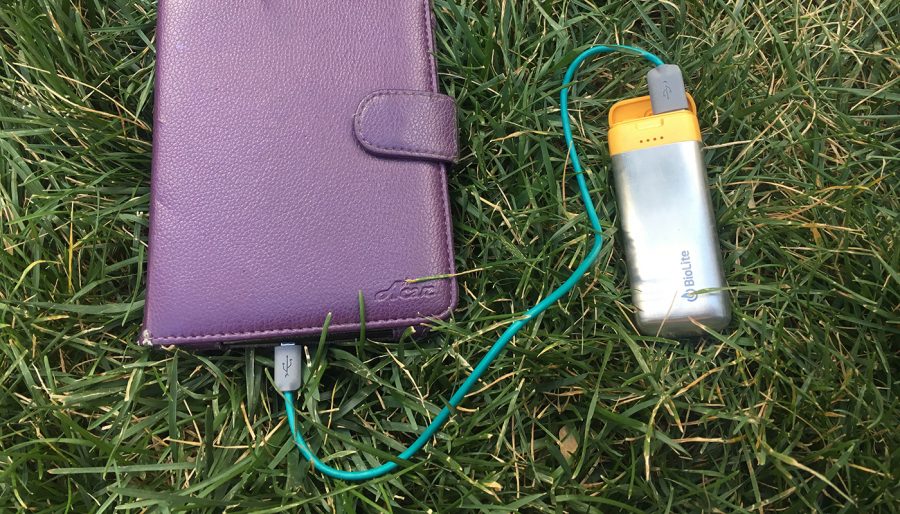 What sets BioLite’s Charge 20 aside from other options out there is that it’s “dunk-proof” when its silicone lid is closed, so you can rest assured you won’t fry it if you get caught out in the rain or if it goes overboard temporarily on a kayaking trip. And for less than 6 ounces, it packs a pretty mean punch at 5,200 mAh—about two phone charges worth. Though, it only has one USB-A port to charge from. 5.8 oz | $40 | bioliteenergy.com 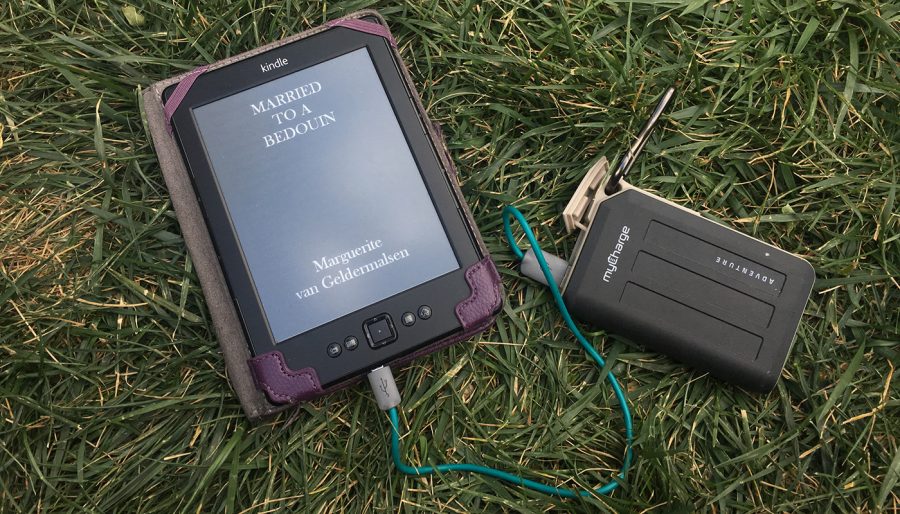 It’s simple, but what I love about the Adventure Max is that it has an integrated carabiner clip, so you can easily hook it onto your pack and keep your phone within arm’s reach while it’s plugged in. It also has two USB-A ports to draw from the 10,500 mAh battery. 8.8 oz | $50 | mycharge.com 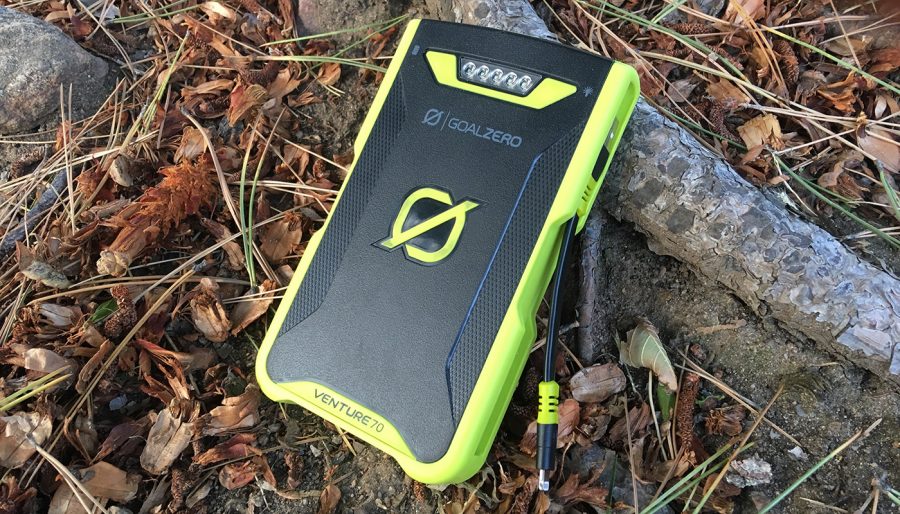 The Venture series from Goal Zero (also available in a 30 with 7,800 mAh) is ready for being out in the wet. All of its ports are waterproof (IP65) and there’s no need to keep track of or worry about replacing any sort of cover to ensure it’s ready for a dunking. And, like many of Goal Zero’s products, it comes with a way to store the cables you need to make that all important connection between the battery and the device you need to charge. The 70 sports 17,700 mAh and a two 5V, 2.4A USB-A ports to charge from. Finally, it has a 65 lumen LED set built in, just in case. 1 lb | $150 | goalzero.com

If you’re heading off on a serious road trip mostly off in the middle of nowhere, you shouldn’t take the risk of hoping someone happens by in the event you need a jump. Portable batteries with car-jumping capabilities can save you big-time, and they’re likely a lot smaller and lighter than you might think. 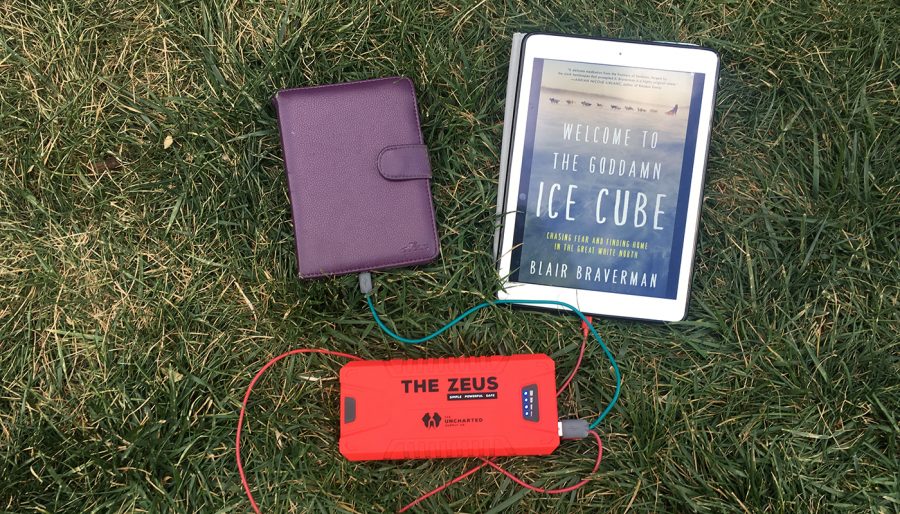 The Zeus is about the size of a brick of gold, and it packs a ton of features: it’s a high-capacity battery at 20,000 mAh that will charge a smartphone up to 10 times, it’s a flashlight, it’s a DC powerbank for tools, and it’ll jump your car’s 12V battery with 1,000 peak Amps. To test out how serious the battery power is on this beauty, I charged my iPhone only with The Zeus for several days—the first two or three charges didn’t even deplete the battery enough for the lights to indicate only 75 percent of the juice remained. I got in a few more charges before I tried plugging in my iPad, too, which sucks a lot more power and killed the remainder of the battery fairly quickly. One ding I noticed: the pack turns off after charging your phone almost all the way to 100, or after charging for a certain period of time. But you can quickly and easily turn it right back on again, so long as you notice. 1.4 lbs | $150 | unchartedsupplyco.com 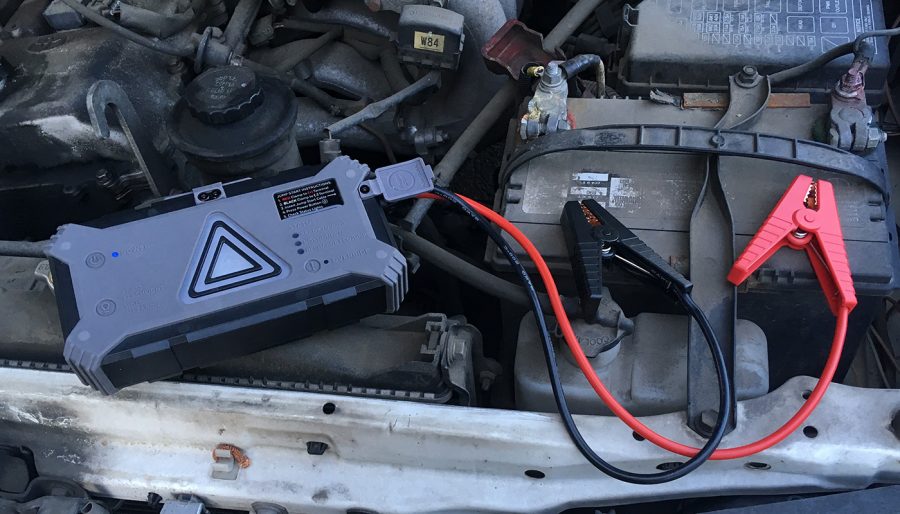 This ruggedized IP67 rated battery holds 15,000 mAh of power but can deliver it with enough force (12v / 55,500 mWh / 600 peak Amps) through a purpose made port and included alligator clip battery attachments to jumpstart your car, truck, ATV or boat. It also has a built in flashlight for dark tire changes or engine checks and a flashing hazard light built (which we found a little silly because it’s relatively small and if you’re stopped, you’re probably going to be using the EcoJump to illuminate your investigation or to get the car jumped—not sitting out flashing to warn other drivers). But the really great thing about the EcoJump is the Low Energy Bluetooth connection it provides to an app on your phone to monitor how much charge it has left. Rather, more importantly, the app reminds you to take it out of the trunk and to keep it charged up so it’s not dead when you need it the most. It also has two 2.1A USB-A charging ports. 1.7 lbs | $150 | ecoxgear.com 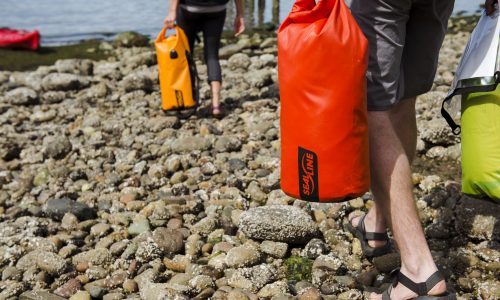 How To Make Your Dry Bags Last Forever

Gifts for Campers and Hikers