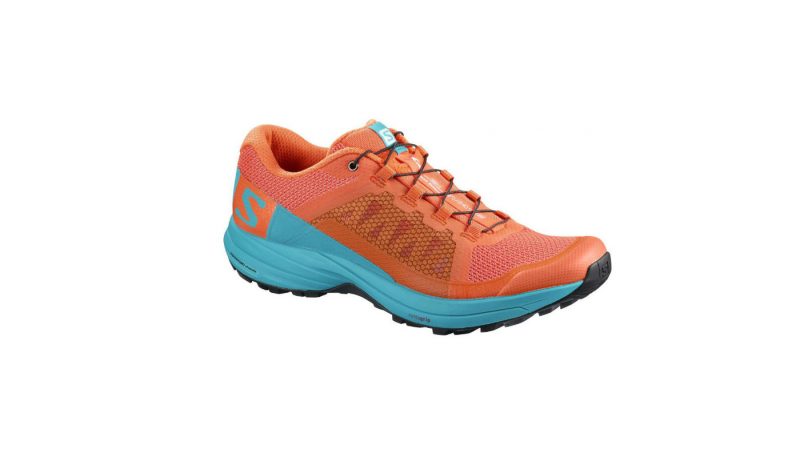 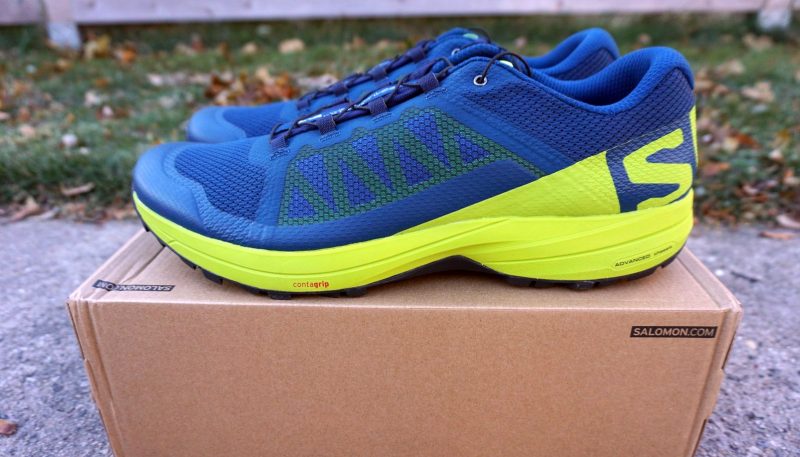 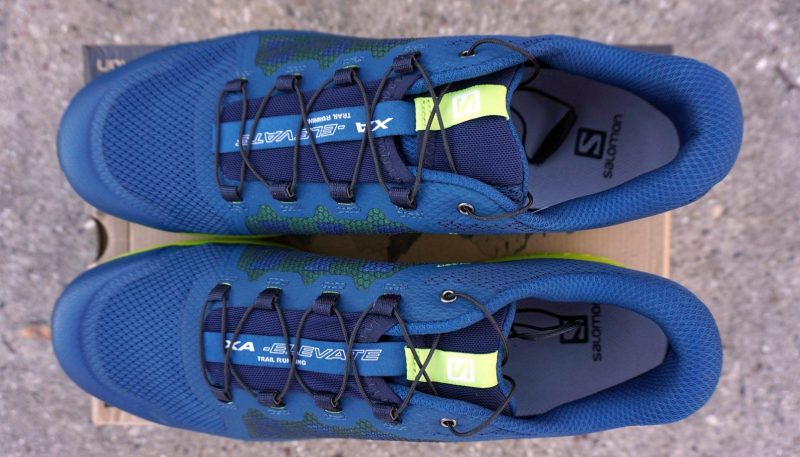 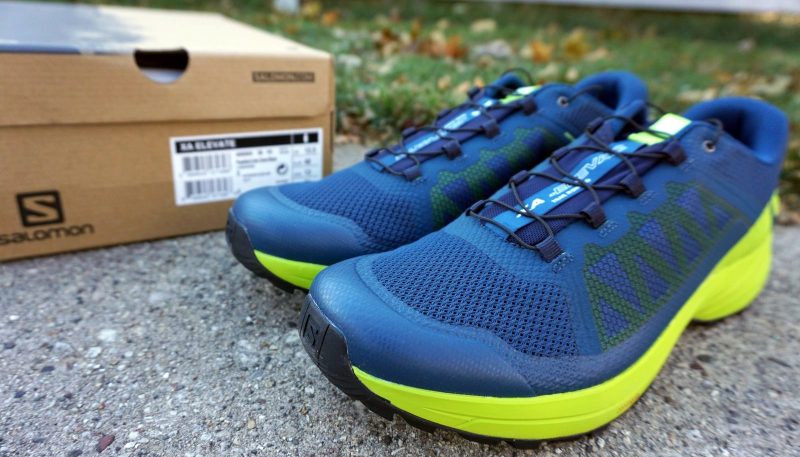 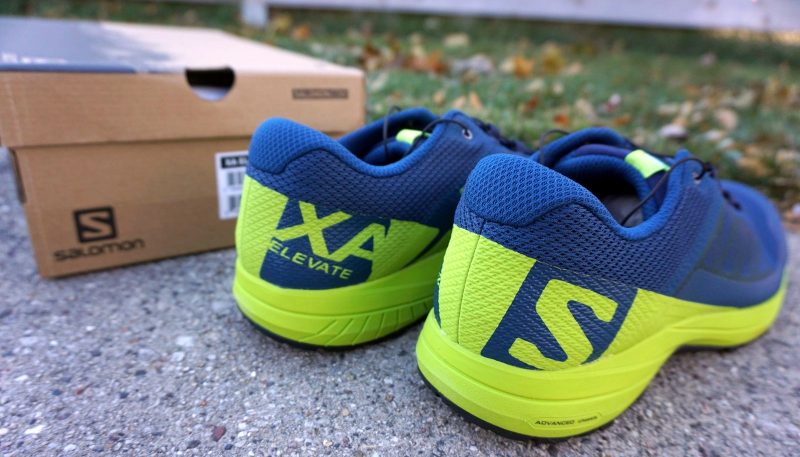 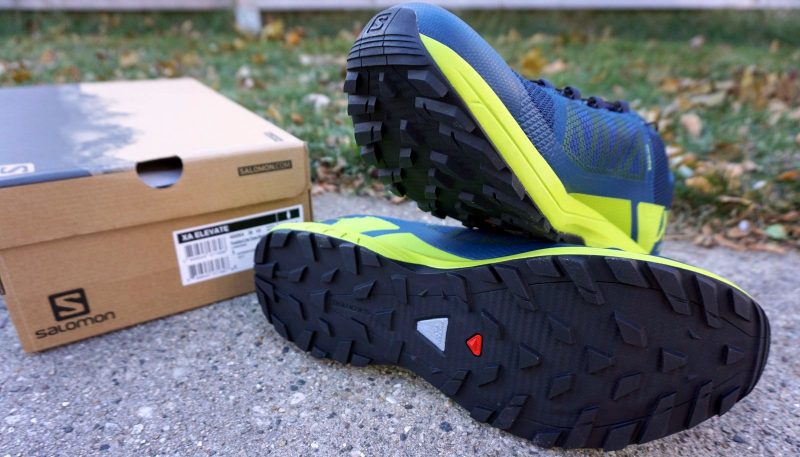 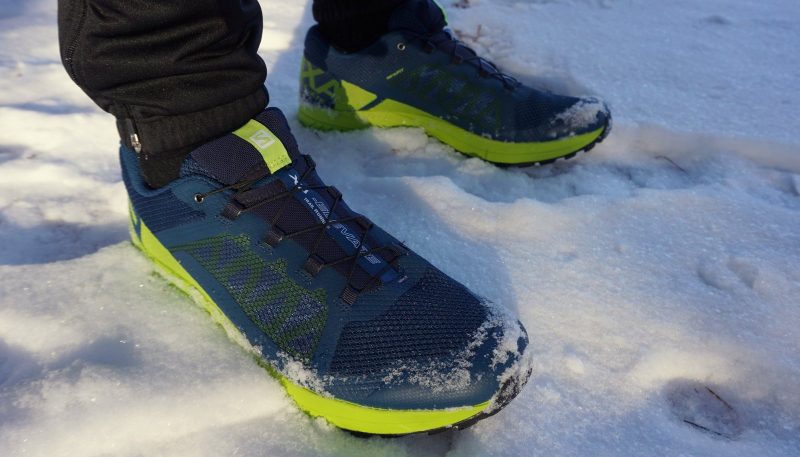 THE VERDICT
The new Salomon XA Elevate is a performance-oriented trail runner with terrific agility, ample protection, and aggressive tread. Our wear-testers could run with confidence up and down just about any type of terrain in any weather, from loose rock to wet roots to hard-pack snow and ice. However, the XA Elevate is built on Salomon’s performance last, which is narrow and snug, especially through the toebox. The midsole is also firm and stiff, which gives the XA Elevate terrific performance at quick paces but makes it feel harsh during longer, slower runs.
FULL REVIEW

Salomon’s XA line-up is aimed at fastpackers and trail runners looking for an aggressive shoe. The new XA Elevate joins other shoes in the XA line like the Pro 3D (a burly light hiker) and Alpine (a snow runner with full-coverage external bootie). Most trail runners will be more familiar with Salomon’s legendary Speedcross model or the racing-focused S-Lab line. The XA Elevate and another new model called the Sense Ride are meant to bridge the divide between some of Salomon’s categories. Salomon’s own website calls the XA Elevate, “a lighter, faster version of the iconic XA Pro 3D.” While the Sense Ride is a plush, comfortable shoe meant for long-distance trail runs and ultramarathons (a more affordable version of the terrific Salomon Sense Ultra 2), the XA Elevate is an aggressive, versatile shoe meant to balance performance and comfort.  Our wear-test team thought it came down a little too far on the side of performance, and was missing some of the comfort they were looking for.

Overall, the XA Elevate felt like one of the fastest, most agile shoes in this round of wear-testing. At 10.7oz (men’s size 9), it hit right in the middle of our test group’s weight range. The midsole stack height (25mm in the rear, 17mm in the forefoot) made it one of the lowest in our test (only the Inov-8 RocLite 315 was lower, but it stands higher than the XA Elevate thanks to much deeper outsole lugs). This was nearly a better fit for the lightweight performance category, but Salomon designed it to compete with cushioned and protective trail shoes.  Our wear-testers were impressed with how speedy the XA Elevate felt on the trail, and thought it could handle just about whatever they threw at it. Overall, the positives are attractive – great traction, protective uppers, aggressive outsoles, and a really killer-looking design.

However, that performance came with trade-offs. Our wear-test runners also found the XA Elevate somewhat uncomfortable. It’s built on Salomon’s performance-oriented last (the overall shape of the shoe), which is narrow and snug. That’s designed to prevent runners’ feet from slipping or sliding inside the shoe, but it also means runners with high-volume feet and those who prefer wide toe boxes are going to feel cramped and squeezed. One runner on our wear-test team found the toe box so restrictive (particularly the low height) that he almost couldn’t run in the shoes.  Going up in size may alleviate some of this discomfort and snugness, so runners between sizes, those with higher-volume feet, or those who prefer a looser fit should consider sizing up.

The XA Elevate’s narrow, snug fit made our wear-testers concerned right off the bat. As one put it, “I was excited to give these new Salomons a whirl when they arrived, but I was quite disappointed.”  They’re built on Salomon’s performance-oriented last, which is designed to be close-fitting. The goal is to prevent the runner’s foot from sliding inside the shoe when the trail turns up, down, or off-camber. Our wear-testers found the XA Elevate too restrictive for comfort though (although it did perform admirably on the trail). Stepping into it wasn’t the plush experience of the New Balance Hierro v3 or the Brooks Caldera 2, for comparison.  One area of particular concern was the toebox, which is tapered to a narrow point and very low across the top of the toes. The human foot isn’t shaped that way. Not every shoe needs to have an Altra-style wide toebox, but our runners wanted a bit more room in the XA Elevate’s front end. For one wear-tester, the low toebox and inflexible bumper across the front end made the front end so tight that they were almost unwearable. The rest of the shoe fit well, so it’s unlikely a larger size could have solved that issue.  Nevertheless, runners who are between sizes, have higher-than-average foot volume, or prefer a more relaxed fit should consider going up by at least a half-size.

The XA Elevate is built to go fast, but unfortunately, our wear-testers had some concerns about running quickly in it. One wear-tester was particularly troubled by the firm heel:  “The heel is supposed to slow down and soften the impact of your foot, not translate that energy forward into a hard smackdown.” Running fast in the XA Elevate, he wrote, “feels like when I run to catch the bus in my wingtips. Not fun.” Also noting the 8mm heel-to-toe drop, another runner on our wear-test team described running fast in the XA Elevate as “awkward” and “difficult to get into a natural rhythm.”

The XA Elevate offers a very secure fit in the sense that the snug design makes it almost impossible for feet to slide or move.  The midfoot is constructed with synthetic overlays that wrap around the instep and midfoot to hold the runner’s foot securely. There’s virtually no movement, even when the trail turns steep or goes off-camber. Most of our wear-testers’ feedback was directed at the laces. Like most of Salomon’s trail shoes, the XA Elevate comes with a proprietary Quicklace system.  It’s designed for quick adjustments on the trail, and to stay put without loosening or coming untied (which would be impossible). One of our wear-testers had nothing but praise for the Quicklace system, calling it tried and true and noting, “it never loosened or felt sloppy, and allowed for quick fit adjustments mid-run.” Another wear-tester disagreed. He had trouble getting lace tension where he wanted it (toward the toe end of the lace holes). In his words, “they don’t evenly distribute the tightening – it’s concentrated too much near the top of the tongue.” According to Salomon, the laces are made from kevlar (the same material used in bulletproof vests), so it’s hard to imagine them every fraying or breaking, no matter how hard they’re cinched down.

The XA Elevates compromises comfort for speed and agility.  As one of our wear-test team members noted in his review, “agility is where the XA Elevate shined. Despite the narrow platform, the XA Elevate felt fast and agile in rock gardens and gave me confidence in foot placements along the way.”  The XA Elevate’s outsole has edge-to-edge 4mm lugs in a variety of four-sided shapes. It doesn’t bite as neatly into soft ground as the Salomon Speedcross 4’s outsole, but the XA Elevate has more aggressive lugs than the new Salomon Sense Ride.  It’s a shoe that runs fast on a wide variety of trails under a lot of different conditions.

The XA Elevate’s dual-density midsole is made with a combination EVA foam and proprietary Energy Cell+ material. Our wear-testers found it firm, nearly to the point of unforgiving and uncomfortable. They called out the heel in particular for giving a harsh, jarring ride. The new Salomon Sense Ride has a vibration-dampening insert in the heel, but that’s not built into the XA Elevate. (The Sense Ride also has a more comfortable fit, so runners who find the XA Elevate too constricting and firm may want to look at them as an alternative.) One of our wear-testers noted, “if  you like a firm shoe underfoot, the XA Elevate is your answer. But despite the firmness, it didn’t feel as lively or energetic as I had hoped.”

The XA Elevate has a moderately aggressive tread pattern and full-coverage rubber outsole with no exposed foam. The midsole has a thin, flexible rockplate built in, although one of our runners noted, “the midsole felt so thin under my metatarsal heads that I was wanting more material underfoot to absorb the shock of trail obstacles along the way.” The uppers offer substantial protection from dust and errant kicked rocks.  One runner on our wear-test team wanted to see a taller toe bumper though, because he said it was so low he wasn’t sure how anyone’s toes fit underneath it.