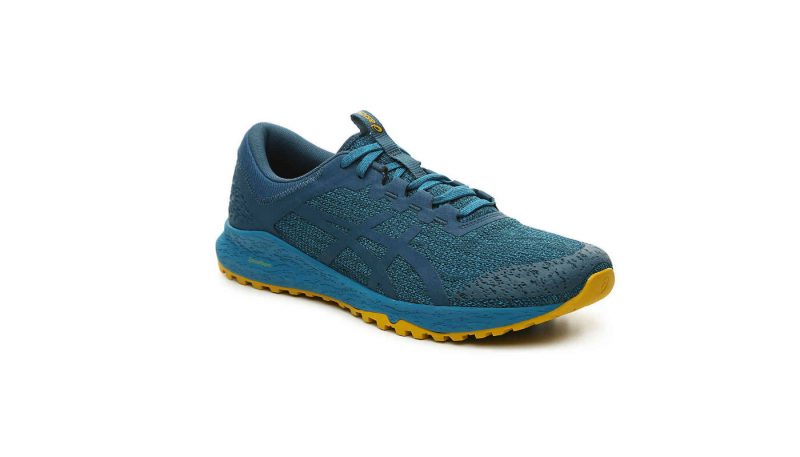 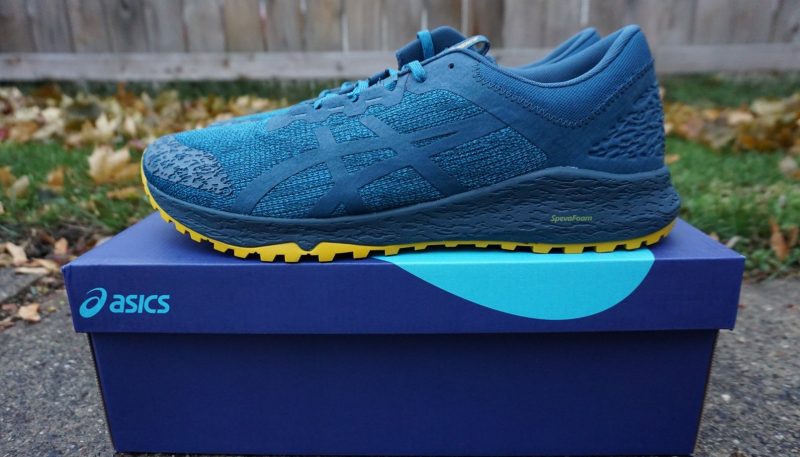 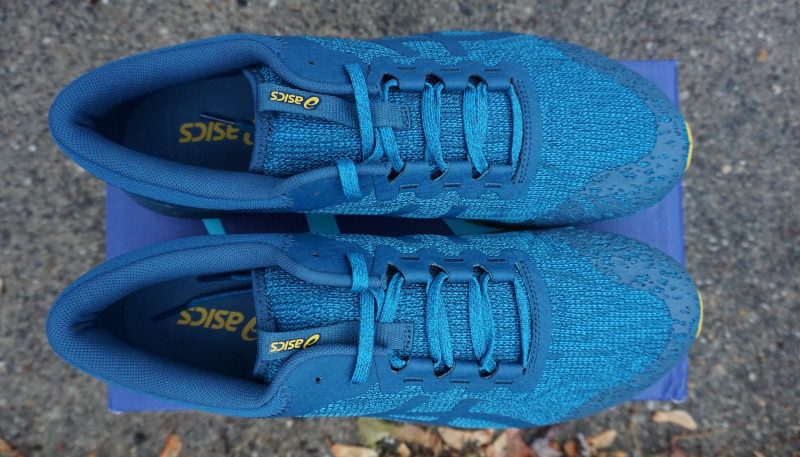 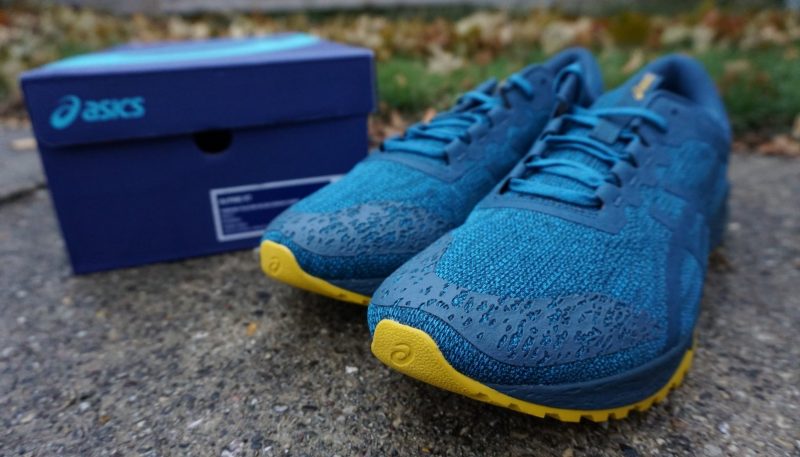 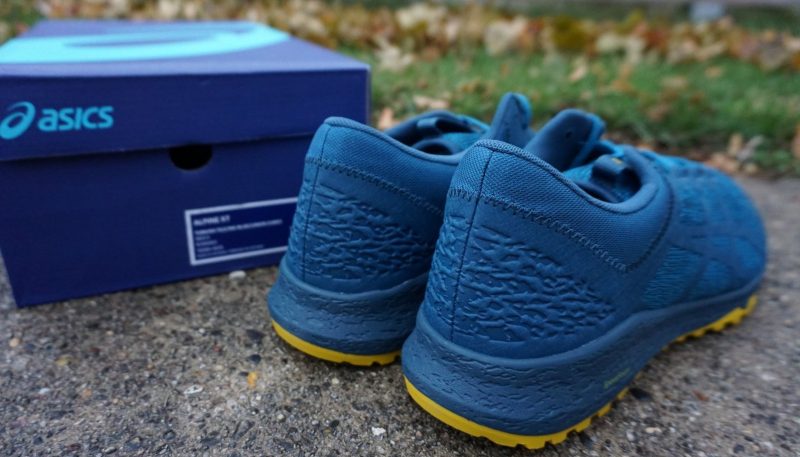 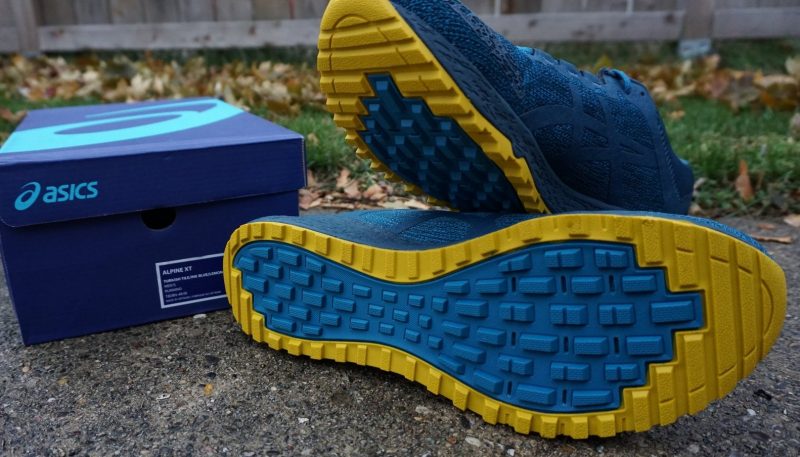 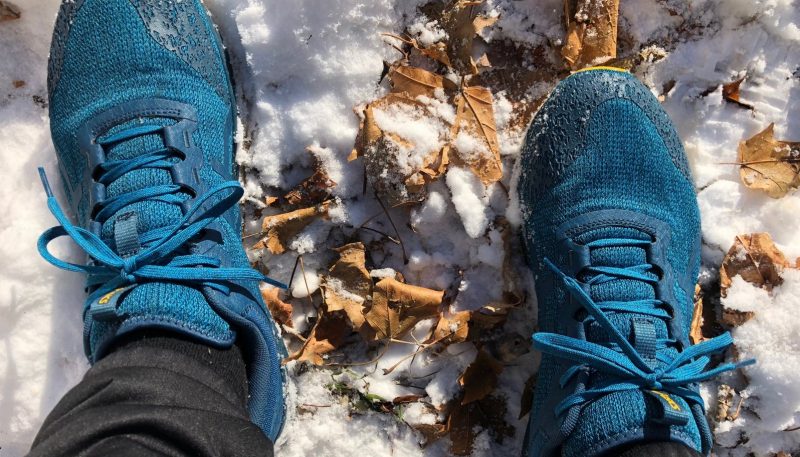 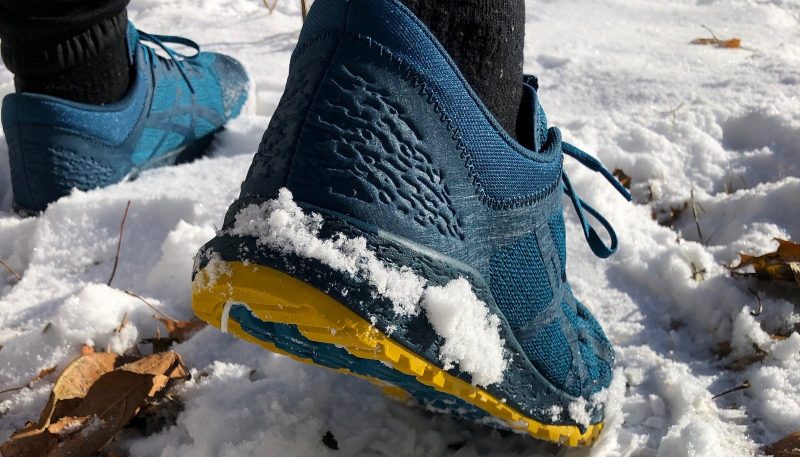 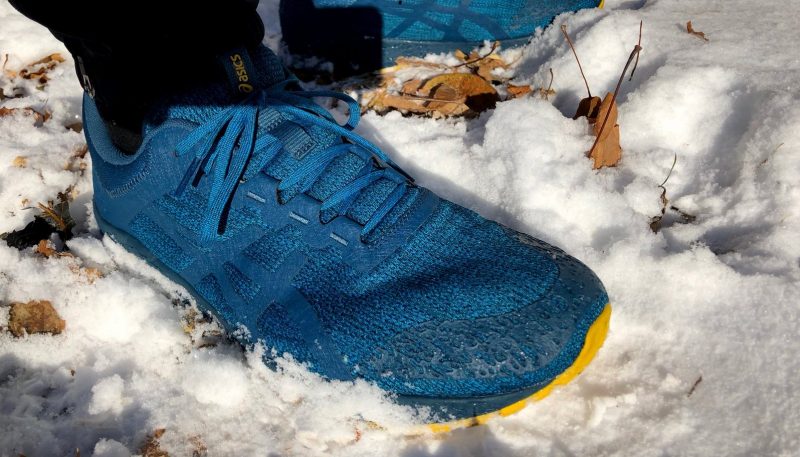 THE VERDICT
The Alpine XT is a new trail model from Asics that strikes a balance between agility and protection, without sacrificing either. Our wear-test team found it versatile across a wide range of trails and conditions, thanks to an outsole with edge-to-edge lugs. The SpEVA foam midsole is responsive and lively, and cushioned enough (26mm heel, 20mm forefoot) that the lack of a forefoot rockplate wasn’t a serious hindrance. Some runners, however, may find the midsole too stiff. The uppers are a near-seamless dense knit that looks great and holds the foot securely and comfortably. Overall, our wear-test team was impressed with the new Asics Alpine XT.

“A vastly better trail running shoe than I’ve seen from Asics in a long time,” is how one of our wear-testers described the new Alpine XT. Overall, it’s a lively, protective, comfortable off-road shoe that performs well on a range of trails and feels lighter than it’s scale weight would suggest. Although some of our wear-testers found it slightly stiff right out of the box, others felt like the midsole was thick and protective enough that they didn’t miss having a forefoot rockplate to guard against rocks and trail hazards.  Our wear-test team praised the Alpine XT’s supportive upper of near-seamless dense knit material, which looks modern and attractive while holding the foot in place securely. Some were concerned, however, with the low height of the toebox. The knitted mesh is thick enough to hold securely without overlays, but it’s also too thick to have a lot of stretch above the toes.

It’s unclear where the Alpine XT falls in the Asics trail lineup, or whether it is designed to replace one of last year’s models, such as the Gel-FujiRado or Gel-FujiEndurance. The Alpine XT was introduced with two other new models – the traditional road/trail hybrid GT-2000 6 and the lightweight Gecko XT. Asics’ trail line has been constantly shifting over the past few years as they introduce new models, then replace them instead of updating them. Last year’s Gel-FujiRado, which our wear-test team rated highly, is not included with the spring 2018 releases.  Hopefully Asics will make refinements to the Alpine XT based on feedback from runners and release an updated version next year, because our wear-test team was impressed enough to call it the Best in Category for Spring 2018. If Asics could ramp up the midsole flexibility (without sacrificing the protection underfoot) and dial in the forefoot fit, the next iteration of the Alpine XT may be unbeatable on the trails.

The Alpine XT’s dense knitted upper was one of the most comfortable in this round of testing. One of our wear-testers said, “it felt like a broken-in baseball glove for my feet,” which is about the highest praise a running shoe can receive from that tester.  The tongue and heel collar have moderate padding, which hold the foot comfortably when the shoes are laced down tightly for technical trails. The near-seamless construction fits almost as comfortably as trail shoes with full-sleeve inner booties, like the New Balance Hierro v3 or last year’s Asics Gel-FujiRado.  The fit is relatively narrow, although not constrictive for runners with low- to moderate-volume feet. Runners with wide, high-volume feet or those who prefer wide toeboxes from companies like Altra and Topo may find the Alpine XT too tight through the midfoot and toes. One of our wear-testers also found the combination of low toebox height and non-stretchy knit material to be slightly uncomfortable across his big toes.

Our wear-testers raved about how fast the Alpine XT feels on the trail, and compared it favorably to trail shoes in the lightweight performance category.  Although the Alpine XT was one of the heaviest shoes in this round of testing (11.9oz for men’s size 10), it did not feel sluggish or slow on the trail. As one wear-tester put it, “These immediately inspired speed. Energetic and fast, with enough cushioning underfoot to feel protected over sharp stones but still a light, low-to-the-ground feel.” The supportive uppers and responsive SpEVA midsole combine for quick foot turnover and speedy, efficient strides on the trail. “A really fun shoe to get up to speed in during faster rolling runs,” praised one runner on our team. Another noted that the low-profile lugs helped the Alpine XT feel fast on a variety of surfaces, but particularly speedy on tame paths and gravel roads.  That makes it, “a great door to trail shoe.”

The Alpine XT’s uppers are woven from a dense knit, which holds the foot securely without the need for stitched-on or heat-bonded overlays. It’s simpler and lighter than an upper that gets its structure and support from overlays or multiple layers of material.  The densely-woven knit is still breathable however, and our wear-testers didn’t report any problems with ventilation issues or hot feet. As one put it, “the mesh upper is a tight and compressive weave that comfortably wraps and snugs down over the foot to provide a secure, enveloping fit.”  The knit uppers are paired with a secure heel cup that cradles the rear of the foot and holds it stable in rough terrain. Another wear-tester praised the Alpine XT as, “best in class fit. It reminds me of how well the big running companies have dialed in their lasts.” Another put it simply, “Asics just nailed it here. I gravitated to this model as a benchmark for fit and security.”  One wear-tester did have some concerns with the Alpine XT’s security on steep descents, and felt like it shined going uphill but gave him less confidence coming back down.

One of our wear-test team members noted, “the Alpine XT struck a nice balance of agility and protection without feeling bulky or cumbersome on technical trails. They have me the confidence I wanted in rocky terrain that require careful footwork and agility.” Our team admired the Alpine XT’s ability to handle different trail types and conditions, from hard-pack soil to loose rocks. A wear-tester based in northern Wisconsin found them stable and agile on ice and snow as well (the densely-woven knit also kept them warmer than shoes with more open, airy knit).  Runners who are regularly in wet terrain or with a lot of smooth rock may want to check out the new Asics Gecko XT, which has a sticky rubber outsole compound to provide extra traction where traditional lugs aren’t as helpful.

Asics put a full-length SpEVA foam midsole on the Alpine XT, which gives it a lively, responsive feeling on the trail.  One of our wear-testers called it a fast-feeling midsole, “that is equally at home training high mileage or racing trails of just about any distance.” Another felt like the SpEVA compound was bouncy and springy across varied terrain, which made it a shoe he came back to over and over again, even after wrapping up testing.  The midsole is one of the firmest in the testing group though, and some of our team felt like that was a drawback. One team member thought the firm midsole was so stiff it felt clunky and inflexible.

The Alpine XT doesn’t have a forefoot rock plate like many trail shoes in this category do, and our wear-test team was divided on it.  A rockplate would give the Alpine XT some additional underfoot protection from sharp stones and rocks. On the other hand, some of our wear-testers thought the midsole was substantial and protective enough that a rockplate wasn’t necessary. As one put it, “a sturdy outsole and good cushion/deep stack height more than makes up for not having a rockplate. Protection is excellent on even the most rocky, technical trails.”  The shoe is already heavier than others in this category, and a rockplate would likely add close to an ounce. A rockplate would also increase the midsole stiffness, which some of our wear-testers were already concerned with. In addition to not having a rockpate, the Alpine XT has the skimpiest toe bumper out of all the shoes tested. The dense mesh protects the toes well though, and also prevents trail dust and grit from getting into the shoes.

Continue Reading
WHERE TO BUY
MSRP
$100.00
BEST DEAL
$57.99
LeftLane Sports
ALSO AVAILABLE AT
CampSaver.com
$62.31
*Your purchase helps to support the work of Gear Institute.
HOW WE TESTED