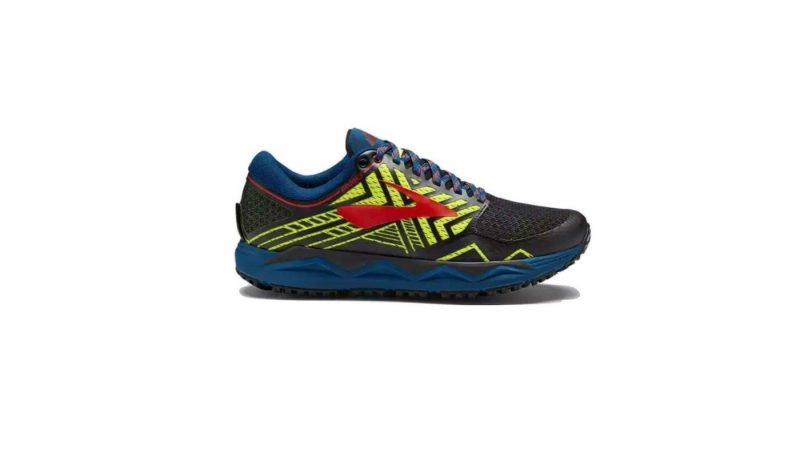 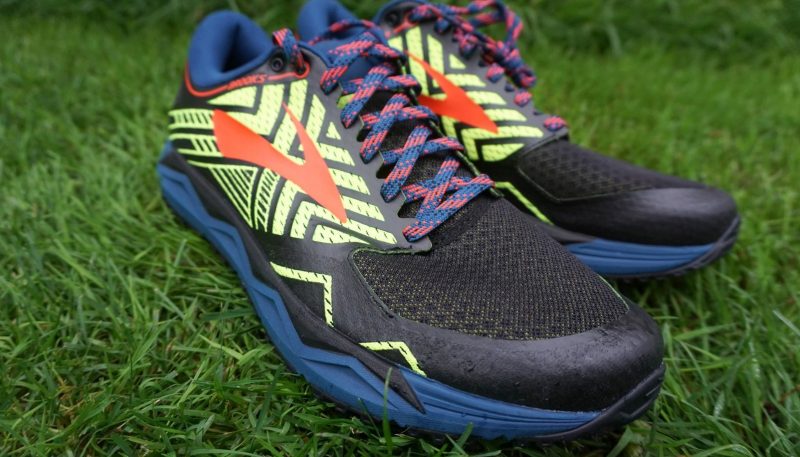 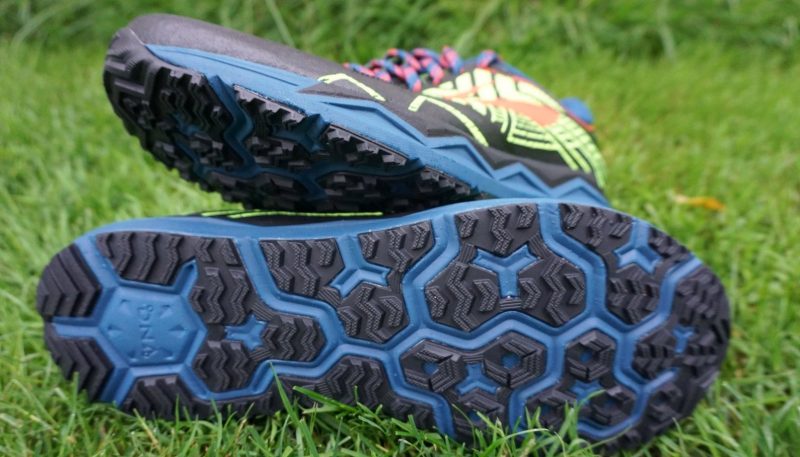 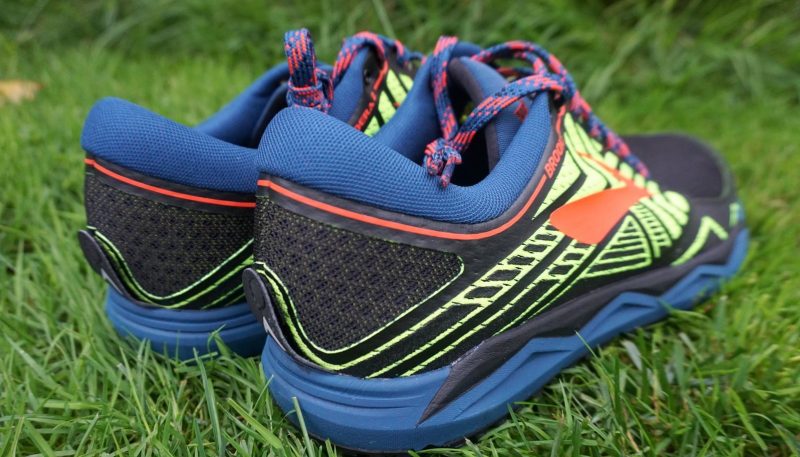 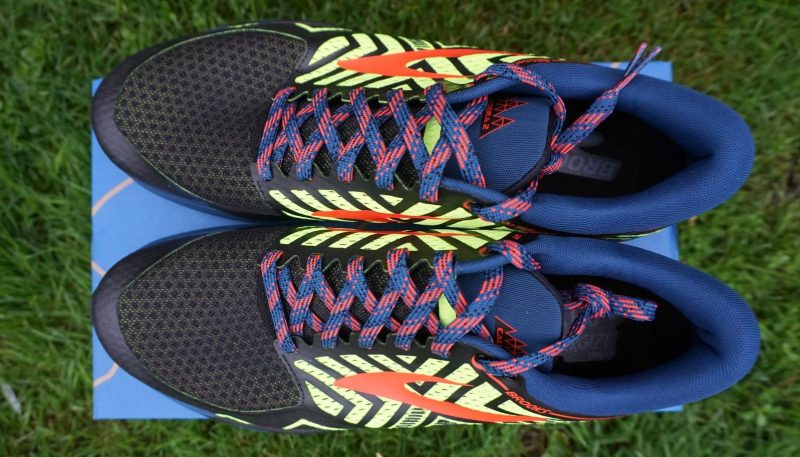 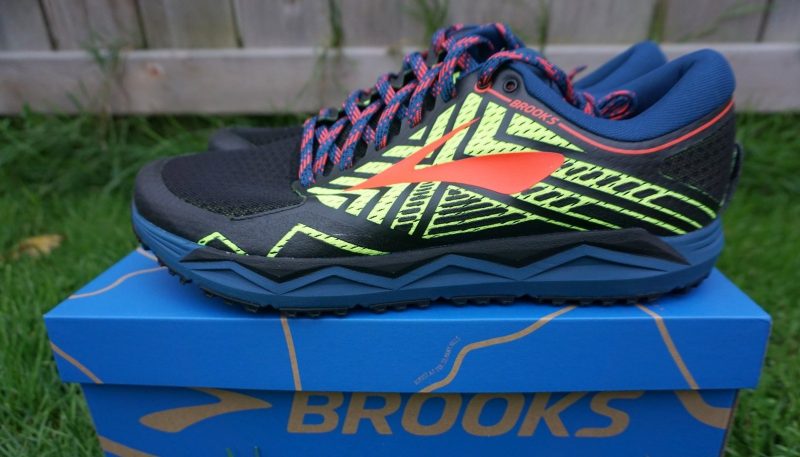 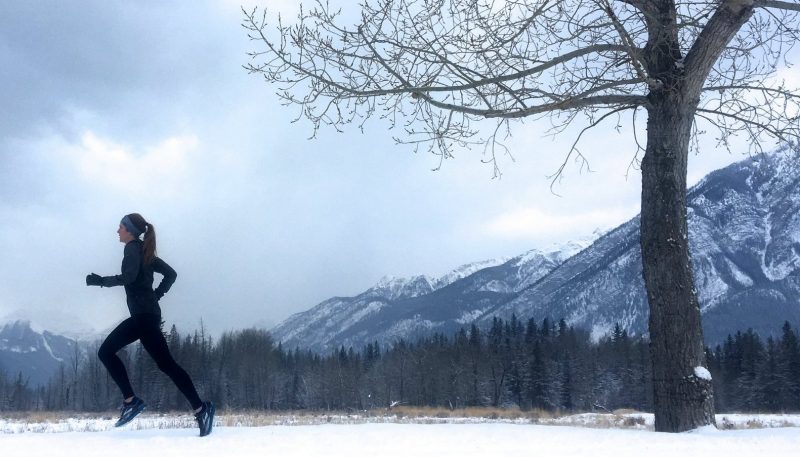 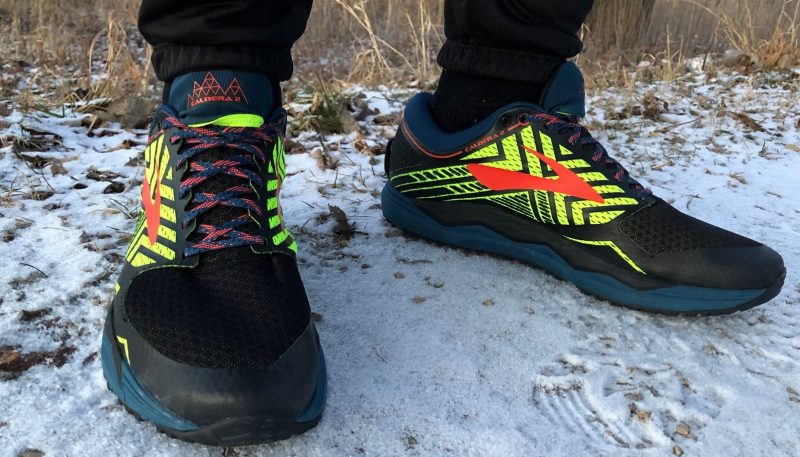 THE VERDICT
The Brooks Caldera 2 is a lightweight, versatile trail shoe that tries to find a balance between protection and cushioning on one hand, and agility and speed on the other. Our wear-test team gave it high marks for comfort and design, but were split on how well it found the right compromise on protection and responsiveness. One called it one of his favorite trail shoes ever and an easy go-to for training, while another said it was a poor choice for anything but easy, mellow terrain without any technical features.
FULL REVIEW

The Caldera 2 sits right in the middle of Brooks’ trail line-up.  It’s not as burley as the Cascadia 12, but not as speedy or performance-oriented as the Mazama 2 or PureGrit 6. One of our wear-testers wrote that it’s the Cascadia’s skinny cousin, but the muscular big brother to the PureGrit and Mazama.  “Right in the middle” is a good description for what the Caldera 2 is trying to accomplish. It has a substantial midsole underfoot (28mm rear stack height, 24mm forefoot), but in a very lightweight package. At 9.7oz (for men’s size 9), it’s the second-lightest shoe in this round of testing, behind the 9.0oz super-lightweight Hoka Challenger ATR 4. One of our wear-testers described the Caldera 2 as the perfect alternative for a trail runner who liked the fit of the Brooks Cascadia 12 but found it too heavy and stiff.

Any shoe that tries to make compromises and hit a balance is going to be controversial, and our wear-test team was split on the Caldera 2. Some rated it one of the best in this round of testing, while others called it one of the most disappointing. Some of our runners thought the small lugs were versatile across a range of different trail conditions, while others found them insufficient and worried about their durability over the long haul.  Some found the BioMoGo midsole agile and responsive on the trail, while others thought it felt squishy and slow.

One point of widespread agreement, however, was about the Caldera’s 2 comfort. Our wear-test runners all gave Brooks high marks for making such a comfortable, plush shoe. One said it disappeared on his foot, and another said it was as comfortable right out of the box as any broken-in road shoe he’s worn.  Brooks updated the uppers from the previous iteration of the Caldera with soft materials and just the right amount of interior padding. Another point of agreement was about the ineffectiveness of the lace garage (a small pocket at the top of the tongue to hold the laces after tying). The idea is solid (and well-established by Salomon), but the pocket’s opening was so low and tight that our wear-testers had trouble fitting the laces in. Most reported that they stopped trying and didn’t use the lace garage at all.

The Caldera 2 shines in Comfort.  The uppers have plush cushioning and Brooks seems to have put some thought into choosing a soft liner.  One of our wear-test runners reacted with, “one of the most comfortable shoes out of the box in the entire test. The room toe box and smart placement of overlays never irritated my foot. This was a shoe I kept coming back to for longer runs.” Another echoed the same feeling, saying the Caldera 2 has hard-to-beat all-day comfort.  The soft ankle collar and padded tongue are particularly comfortable, and one wear-tester noted that the Caldera 2 feels as good as a broken-in road shoe. There was similar praise for the midsole’s comfort. The trail runners on our wear-test team called it soft and plush underfoot, which “made easy running on smooth trails a pleasure.”

Our wear-test team was divided here. Some gave the Caldera 2 high marks as a speedy shoe, particularly given the high stack height and substantial cushion of the midsole. One wrote, “given the generous amount of cushioning, it still felt fast and light on smooth dirt trails and technical singletrack.” Our runners thought the low heel-to-toe drop, slightly rockered last, and flexible midsole gave the Caldera 2 a really quick stride and easy, smooth turnover.  On the other hand, another wear-tester thought the midsole felt soft and slow. As he put it, “each footstrike hit the ground and sank into the soft midsole, giving little energy back to spring off of.” His conclusion is that the Caldera 2 would work well as a comfortable shoe for easy efforts or recovery days, but it didn’t have the quick pop that he was looking for in a race shoe.

Here too our wear-test team had strong differences of opinion. There was agreement that the heel cup is secure, and no one on the wear-test team reported problems with heel slippage, even on on the first few runs (where a stiff midsole can sometimes cause the rear part of a runner’s foot to pull out, before the midsole breaks in and becomes more flexible). The lacing holes are integrated into the midfoot wrap which effectively cradles the foot when they’re laced up. The lacing wrap is a single unit though, so it isn’t as adjustable as a system like Saucony’s ISOFIT or Nike’s Flywire. The forefoot is wider than typical (although not as wide as Altra or Topo Athletic), but some of our wear-test team felt like the entire shoe ran about a half-size big. One runner on the team explained, “I could have gone down a half-size easily. The upper lacked any ability to hold my foot in the saddle,” which left him feeling like he wasn’t stable or secure on the trail. This affected how fast and agile the Caldera 2 felt as well.  Runners in between sizes should go down a half-size rather than up.

The Caldera 2’s outsole is made up of alternating chevron-shaped lugs arranged into small pods. In between are channels for flexibility. The channels are exposed BioMoGo foam, and exposed foam brings concerns with long-term durability. Some of our wear-testers were also worried the glued-on pods of lugs would stay attached over time, although none reported loose or torn-off sections during the wear-testing period.  The lugs are small and uniform height, but they run edge to edge and the full length of the outsole. Wear-testers who felt like the shoe fit their foot well had no trouble with agility on technical terrain. Those with lower-volume feet who felt like the Caldera 2 was slightly oversized didn’t feel as confident through rocky, technical sections of trail. The entire wear-test team thought the Caldera 2 excelled on smooth-rolling trails and dirt fire roads though. The smaller lugs shave weight over beefier, burly lugs, so this is a trade-off potential buyers should keep in mind.

“Cush without feeling like mush,” is how one of our wear-testers described the Caldera 2.  She was impressed by how low-to-the-ground a shoe with a 28mm/24mm stack height felt. Brooks uses proprietary BioMoGo DNA midsole foam, which is soft and cushioned without feeling dead or mushy (for green runners, BioMoGo also biodegrades fifty times faster than standard EVA foam). The segmented outsole is flexible, which complements the responsive ride nicely.  However, a couple of our wear-testers felt like the Caldera 2 lacked some snappiness when they tried to turn up the pace.

Even without a rockplate, our wear-test runners felt like the Caldera 2 gave them the underfoot protection they were looking for. One noted, “the Caldera 2 protected my feet nicely during longer runs in the mountains around Boulder [Colorado], while not creating a stiff or hard sensation underfoot typically found in shoes with overbuilt rockplates.” Some wear-testers did report that the open sections of foam in between the groups of lugs allowed pressure to come through the midsole (it also reinforced their concerns about the sole’s durability).  Additionally, there was concern about the toe bumper, which is an integrated head-bonded overlay rather than a beefy stitched-on piece. The bonded overlay saves weight, which is clearly one of Brooks’ goals for the Caldera 2, but some of our wear-testers thought it wasn’t enough. “I have some road shoes with more protection,” observed one of them.

Continue Reading
WHERE TO BUY
MSRP
$140.00
BEST DEAL
$99.95
*Your purchase helps to support the work of Gear Institute.
HOW WE TESTED