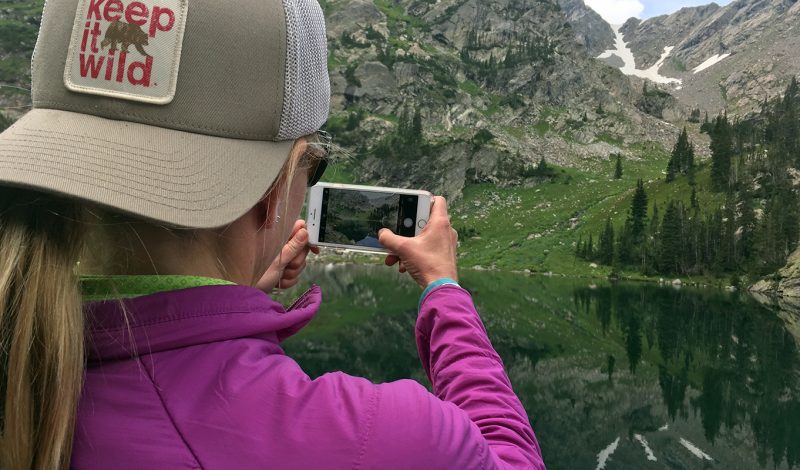 Even the most staunch purists are finding themselves caving into bringing tech along when they hit the trail for an afternoon or for days on end. It’s OK. No matter if you’re just teetering into having your tech come along or if you’re a tech savvy veteran, here’s a list of some of the latest backpacking tech gear that can be really useful (without being too distracting) on the trial. 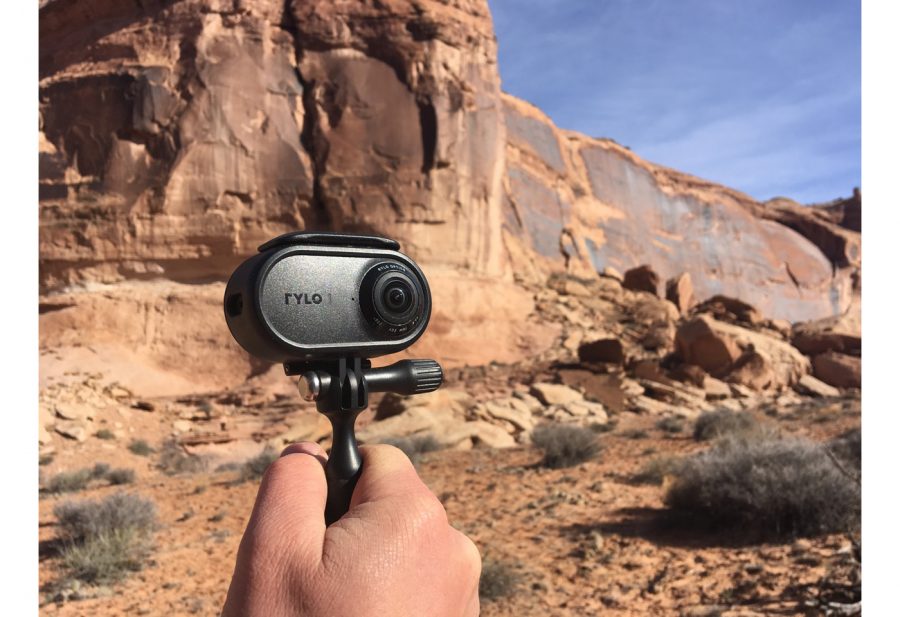 The making of adventure videos goes back way before the era of YouTube or Instagram, it’s just that the cameras have become much smaller and easier to take along. One of the great woes that has separated home made videos from cinematic masterpieces is keeping the video smooth and easy to watch while hiking. While mechanical gimbals have gotten smaller to match the cameras, they’re still a nuisance. But thanks to a new camera on the market, the Rylo, that’s all about to change. Rylo shoots either in full spherical 360º by 360º mode or in 180º mode to capture a huge amount of area around you. Then, when you crop that spherical, or semi-spherical footage down to a standard rectangular video viewing size, the camera software can use the extra data to smoothen out any bumps or jerks of the camera for super smooth footage. The camera is compact, has other great features like shooting spherical stills (essentially super panoramas), bluetooth remote control, tiny planet perspective and more. It’s challenged by low light conditions and advanced photo-/videographers could get frustrated from the lack of manual controls. Curious for more? Check out our How to use a 360-degree Action Camera story. 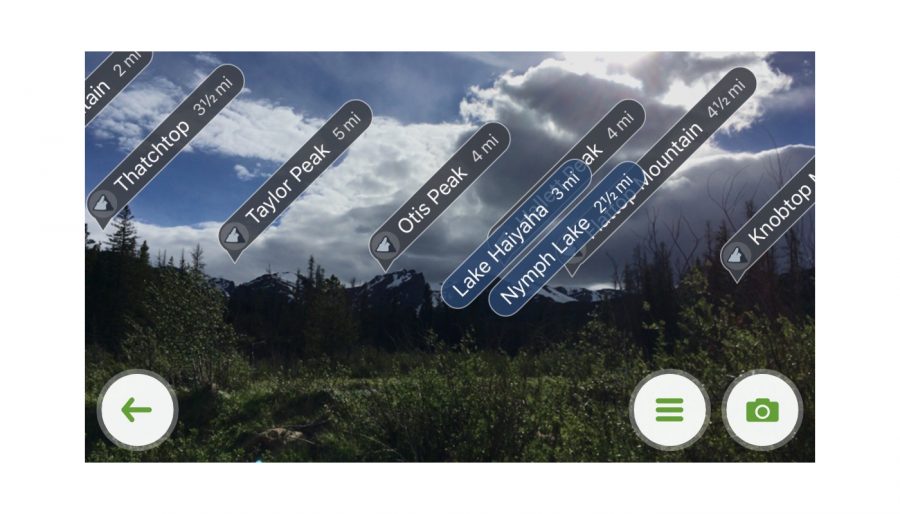 Even though I learned about backcountry navigation using a paper map and compass—and I always still carry those with me on any trip—I am a fan of how technology can be used in this capacity. The convenience of having downloaded my topo maps to see them on my phone is incredible. I don’t even have to deal with unfolding and refolding large paper maps (though they can now be printed on standard paper sizes) or looking through a 1-gallon ZipLoc bag if it’s wet out (instead of buying the waterproof paper). I use a LifeProof waterproof phone case and the Viewranger App to see where I am. The interface is intuitive and easy to navigate and I really love the Viewranger Skyline feature where it overlays the names of peaks and other POI’s looking through the phone’s camera. What I don’t like using the app for is tracking my routes since it eats up the phone battery so quickly and since I use the phone’s camera and other features, I don’t want to have to be charging it while I’m on the go. That’s what a good GPS watch is for—see below (and maybe the Apple Watch/Android Wear version of the app does better at battery management). 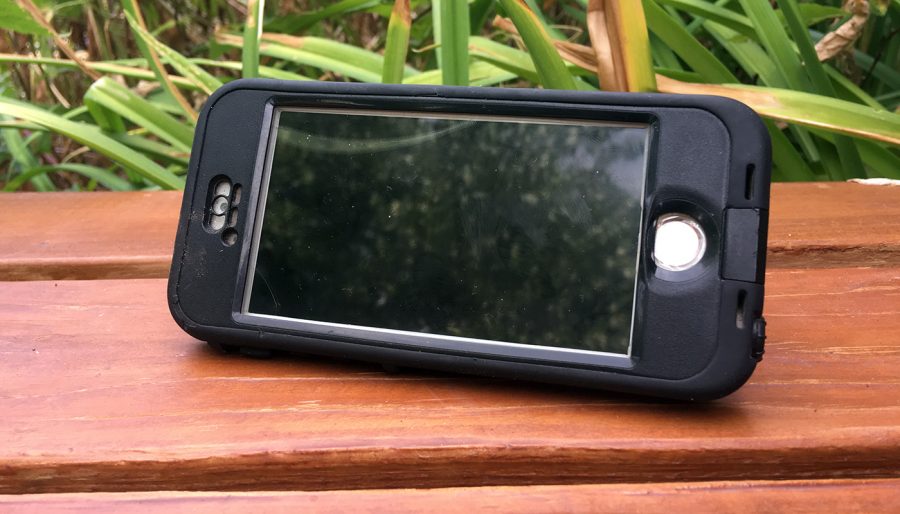 To eliminate any concern about exposing your phone to the elements get a LifeProof case. All of their cases except for the Slam series are completely waterproof which makes them perfect for any sort of adventure. Even their Nuud series which does not have a screen cover is waterproof because the frame forms a seal around the glass of the screen but does have protection for the ports, speakers, microphones, buttons and cameras. For screen protection add on a sheet of their Alpha Glass or check out the Fre series. I have taken my phone canyoneering where I was jumping off of 35’ waterfalls into the pools below with my phone wrapped in a LifeProof case and it worked great. I used to keep my phone in the LifeProof case all of the time but have since moved to just installing it when I go on overnight wilderness adventures. Available for a number of Apple and Samsung phones as well as select Google and LG phones. 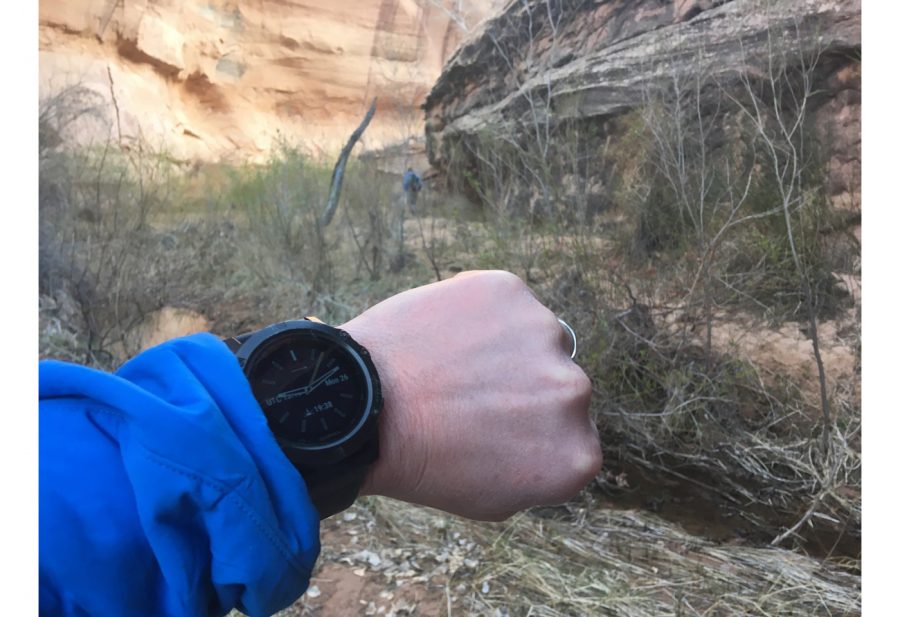 While a lot of the features of this watch are geared towards runners and even cyclists, I found it to be a great asset for marking waypoints and being able to use the breadcrumb tracking feature to know I could always find my way back to camp. Especially on my Utah desert canyoneering trip to find the specific location of the routes to get into and out of the canyon. Otherwise I might suddenly come to the impasse of a 500 foot rappel or climb.

One of the biggest concerns of these sorts of watches in the past has been battery life. Because of that I did pack a Goal Zero Venture 70 battery pack (see below), but as it turns out I only needed to charge the watch once in the five days of tracking 8-10 hours a day while squeezing through the canyon slots. The watch held up well to the risk of abrasion along the canyon walls and I managed to only scratch the outer bezel and not the sapphire glass itself. I don’t know if that’s because the hardened glass resisted scratches or if I actually managed not to rub it against the rock. Check out our First Look review of the Garmin fenix 5x. 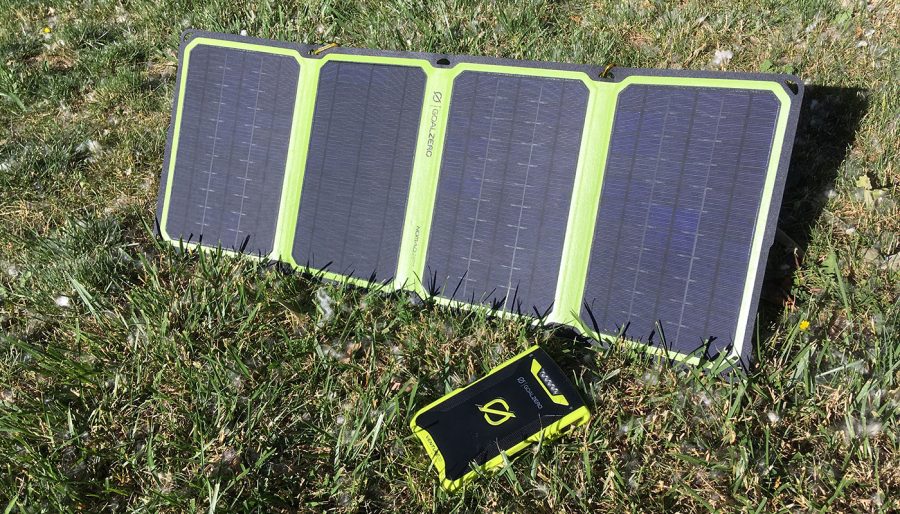 One of the biggest challenges with having and using all of these electronics in the wild is keeping them charged so they don’t turn into dead weight bricks. Goal Zero has been a leader in this space since 2009 (conceptually envisioned in 2007). Founded to bring clean and sustainable power sources to developing parts of the world they also recognized the needs of the developed world and all the gadgets we use and play with. For backpacking and being out in the wild they developed the waterproof Venture series. The rubberized reinforced ports keep out water and grime so you don’t have to worry about keeping the power pack tucked away in a waterproof bag. The 70 refers to the 70 watt-hours of power (technically, 66.9 Wh) which equates to 17,700 milliamp-hours (mAh). As a comparison, the iPhone 8 battery holds around 1,800 mAh. Both of the Venture versions (there’s also a smaller 30Wh style) also have a built in LED flashlight. The 70 has two 5V up to 2.4A (12W max) USB out plugs so you can share the power. Pair it up with the new Nomad 28 solar pannel and you’ve got juice to power all of these other techy toys as long as there’s sun.
Buy Now 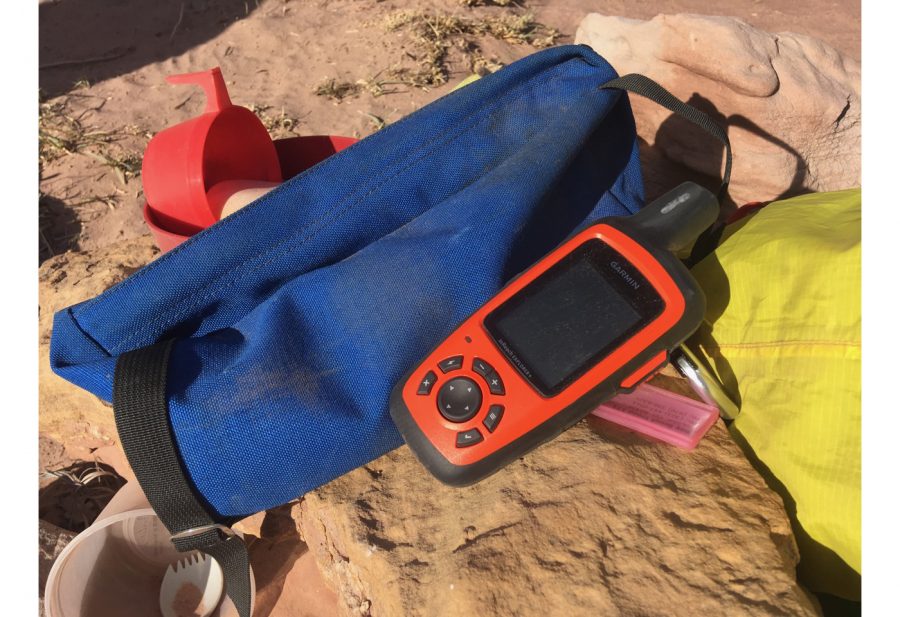 No matter what you’re up to in the backcountry, the risk factor steps up a bit and help is no longer just a 911 call away—especially if you don’t have cell coverage. The large and successful Swiss GPS company Garmin purchased DeLorme in 2016 specifically for the InReach device they developed. It communicates over the circumpolar Iridium satellite network which is the only truly global network (most satellite networks start to fade around 70 degrees of latitude) and it’s the best way to communicate from a remote location. It also works as a standalone handheld GPS device (the original model did not have a screen for the person carrying it to see where they are). The InReach will pair with a smartphone and app to make it easier to type out messages instead of using the hunt-and-peck interface on the InReach itself. It’s a great piece of mind for yourself, those on the trip with you and loved ones at home to know you’re OK or if you need help. A dedicated SOS button can be pushed as a defacto wilderness 911 call and request for assistance. 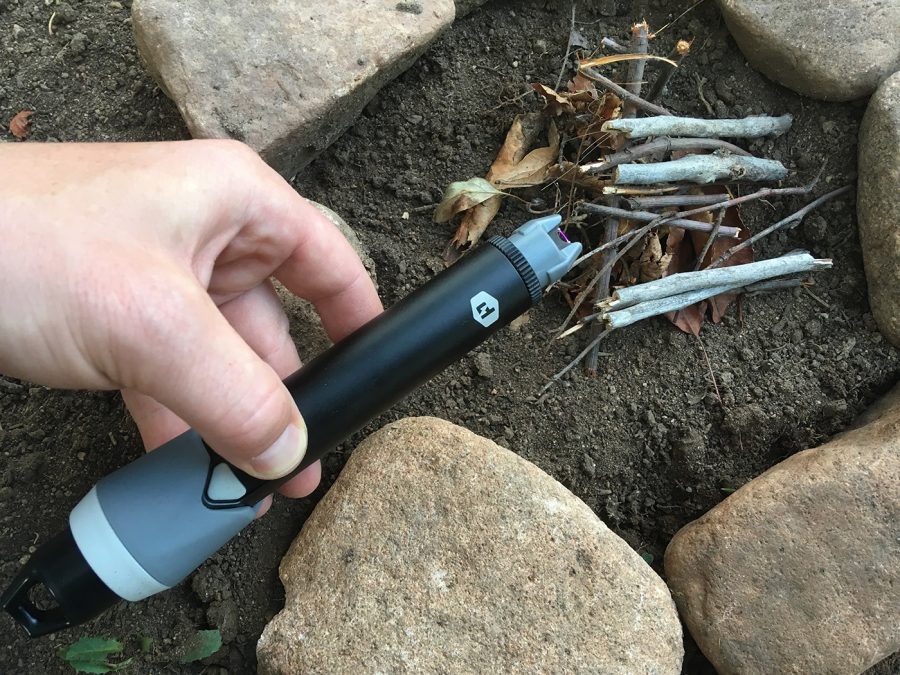 Every backpacking kit should include at least a few methods of getting a fire started. I’m a big fan of good ole matches (my favorite are UCO’s Titan Stormproof Match Kit) and I usually keep a few Bic mini lighters stashed here and there. But both for the techy wow factor as well as a very practical ignition solution this plasma lighter is pretty amazing. It is USB rechargeable and has a little built in flashlight if you find yourself hunting for kindling in the dark to get things going. The hot plasma arcs are unaffected by wind, snow or rain—although, what you’re trying to ignite may be. The Sparkr won’t dry out wet fuel to get it going, as I discovered on a trip to Guatemala with it, but if it’s dry and ready to light, the Sparkr won’t have any problems getting it to catch. 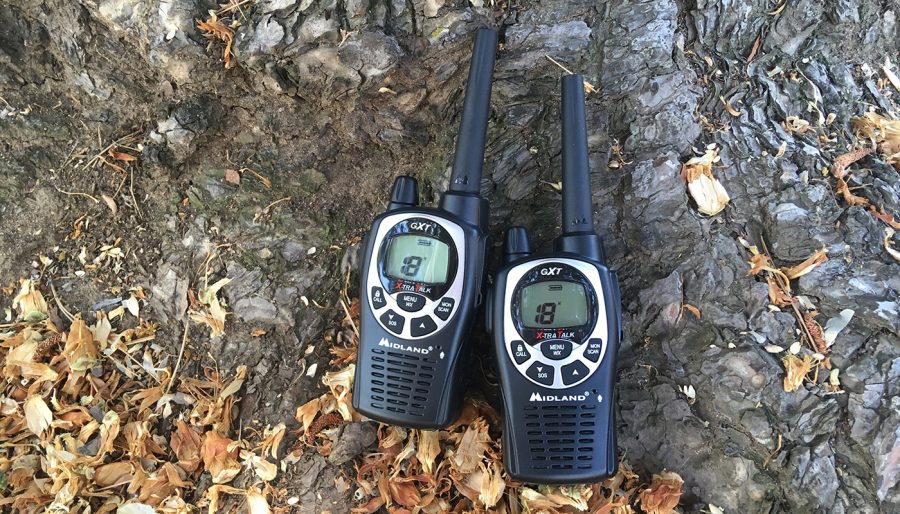 Unfortunately, walkie-talkie two-way radios are a bit of niche market. It seems the big buyers of these are families providing a way to entertain the kids while on trips (totally legit) or for over cautious radio geeks touting some sort of safety blah, blah, blah. I’ll admit, I’m in both camps (father, HAM operator & former SAR) and would argue the latter should be considered more by outdoor enthusiasts of all sorts. While it may not be as big of a deal on backpacking trips in mostly benign wether, radios like this can be a huge help on winter trips like backcountry skiing or the like for groups even as small as two—even when not in an emergency situation. That said, this set from Midland has 50 GMRS (General Mobile Radio Service) channels w/ privacy codes (142 CTCSS/DCS), is splash/rainproof, has NOAA Weather reports and alerts, and includes boom mic headsets, AC & DC charging options and belt clips. And they taut a 36-mile range—in PRIME conditions (usually across water with no obstructions and the perfect weather). In the woods and mountains expect much less than that. While they do have a rechargeable battery in them they can also take four AA batteries—a great way to ensure backup power is handy (without having to wait to charge them).