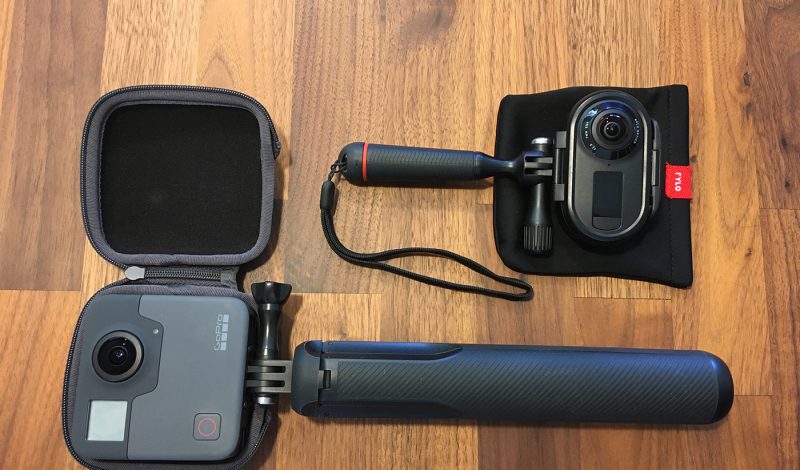 The thing about action cameras is while in the midst of the action, the last thing you want to do is frame the shot or make sure the camera is pointing the right way to record that key moment. The next generation of action cameras are taking care of that by recording everything—they literally see everything happening around them without having to point the camera in the proper direction. These are 360-degree cameras. They usually have at least two very wide angle lenses and the images are then stitched together. These kinds of cameras have been trending since about 2015 but as always with new technologies, they were relatively pricey, clunky and took particularly special care. Now, they’re much easier to use and more companies are making them.

I’ve had the chance to play with two different models (there are now quite a few of them out there) to call out the general similarities that apply to using these cameras and to dig into some of the specifics of what makes each camera style unique.

GoPro is mostly to blame for the category of the action camera. Founded in 2002, they have been cranking out compact cameras that can be attached nearly anywhere the action is. To be part of this 360-degree camera market they came up with the Fusion which only just came out last year.

The other camera I’m working with is called Rylo and is new to the scene and only comes in a 360-degree version. Rylo was started by former Apple and Instagram employees and the camera went to market towards the end of last year as well.

Jumping ahead briefly, in light of keeping the end product in mind, there are a few ways to view and experience the image or video captured by 360-degree cameras. What probably comes to mind first is the ability to pan a standard rectangle image or video in all directions, similar to how we’ve been experiencing panorama shots on some platforms. And this highlights a key point, short of using a pair of VR goggles, everything is still viewed in the common rectangular frame—either horizontal TV style or the relatively new vertical format (for video) thanks to how people hold their smartphones. There are a few other ways to view the final product. In the case of a photo, you as the photographer can select a specific frame from the spherical image and just export that. The viewer will just see a regular image that doesn’t pan and may never know it came from a 360-degree camera. Similar with video, except as the creator, you choose what portion of the spherical image to frame and follow and again you end up with a standard style video. Then there are the styles really unique to 360-degree cameras like Tiny Planet mode or various fish-eye modes. These can be still images or video, but they take a very specific reason to use them since they can be a little hard to view or watch.

Both of these cameras use two lenses, one mounted opposite the other on the camera casing. These wide angle lenses have a field of view greater than 180º so the edges of the images overlap some. The software is then able to align matching elements from each lens and blend them to create the spherical image. Both the Fusion and the Rylo do a pretty good job of hiding the stitch line, especially when subjects that cross the stitch line are farther away. Objects that are closer to the camera on the stitch line tend to get a little warpy or on rare occasion mangled. This is a little exception to the “set and forget” nature these cameras claim. Yes, they can capture everything around them, but if you don’t consider placement, you might get a funny stitch line right where you don’t want it.

The other little exception to the “set and forget” claim of these cameras is that I found it helpful to attempt to do some sort of framing if possible—and if you’re not just going to publish the final as a 360-degree video or image. It’s true that in post production you can follow any subject that can be seen by the camera, and the Rylo software has an incredible post production feature called “follow this” which works pretty well. But if you know what subject you want to follow and have the ability to move the camera in such a way so that subject stays centered in front of the main lens that will make things a little easier in post production and will avoid having them cross the stitch line.

The other lesson I learned while using these cameras, especially on a longer selfie-stick, is to keep the camera vertically aligned with the stick. Don’t tip or angle the camera to aim it as you would with a standard action camera. This is where you want to use the stitch line to your advantage—this will hide the stick completely. Tipping the camera takes the stick out of the stitch line and it shows up in the shot.

One of the great things about shooting with a 360-degree camera is the stabilization. And this feature will be the main driver for why most amatuer and social shooters will be drawn to drop the big bucks on these kinds of cameras. This is done with gyroscopes and software algorithms and each manufacturer does it a little differently. In the end, Rylo takes the cake for incredible buttery-smooth stabilization. It doesn’t matter if the person holding the camera is walking, running, biking, or jumping around, the camera makes it gentle and easy to watch, allowing the viewer to focus on the subject and not be distracted by the bounce and shake.

Here’s the part most of the camera’s marketing campaigns don’t tell you about. Rylo is probably the most straightforward of the lot both in how they promote the camera and how post production actually works. The easiest way to avoid much in the way of post production is to just post the 360-degree video or photo for your viewers to choose how they scroll around and experience the image or video. Non-360-degree photos are also still relatively easy: just choose the view from the spherical image you want to share and export it. It’s non-360-degree video that gets to be a process. Again, Rylo makes it pretty easy with two simple tools: “follow this” as mentioned earlier and “look here”. Both of these options appear by a simple press and hold on a certain part of the video frame. They both work as they sound. “Follow this” works best when the object to follow is highly contrasted from the background, like a skier on a white snow field. The software can baulk and loose what it’s following in low contrast follow requests. One trick as mentioned above is to treat the 360-degree camera like a regular camera and always point the center of the front lens at the subject you know you want to follow. The major disadvantage of the Rylo is all of this editing must be done on the phone in the Rylo App. There is no laptop or desktop software available to do the post production editing there. Like any other digital file, you can however move or copy the files from the micro-SD card to a hard drive to save for later, but to edit it, you’ll need to move it all back to the micro-SD card and put it back in the camera.

GoPro provides the option for editing the Fusion footage either on the phone or on a laptop or desktop. In the app instead of being able to fix either “look here” or “follow this” points GoPro uses the gyroscope in the phone to allow the editor to choose where the frame is looking. So the app will play back the 360-degree video and while that’s happening, the editor will manipulate the phone to look the different directions or to follow a subject moving around the camera. The advantage to this is it’s pretty easy to do. The editor can also turn off the gyroscope and just manipulate the view of the camera with swipes and pinches on the screen. The disadvantage is even with stabilization the video shows exactly what the camera movement was so it can still be a little jerky and the pans are not nearly as smooth as when the Rylo glides to a preset point along the timeline. GoPro will probably make an update to the software at some point. The Fusion footage can also be transferred to a desktop or laptop running the Fusion Studio software for all kinds of other editing.

As always, each camera has it’s pros and cons and since every user has different priorities regarding the kind of shooting they’re going to do they need to decide which camera best aligns with those objectives. So, which camera is best for you?