Though manufacturers have been experimenting with electronic shifting systems for bikes since the early 1990s, it wasn’t until 2009 that the first commercially viable system was launched. Shimano’s Di2 was a game-changer – in the true sense of the phrase – and electronic groups have been a staple on road bikes ever since.

But as good as that system has become, SRAM upped the ante considerably when it launched its own electronic group in the summer of 2015. The RED eTap was a wireless component set that greatly simplified the setup, lowered the weight, and in this reviewer’s opinion, provided the most intuitive interface of all major groups.

This year SRAM took another big step, introducing the HRD (hydraulic disc brake) version, and we simply had to try it out. After more than 600 miles in three months of testing, we’re really happy we did: To put it simply, LOVE! I’ve now ridden the three major electronic groups availbe, and SRAM eTap HRD stands out for numerous reasons.

While eTap itself is not brand new – it’s the HRD portion that is – let’s start with the most obvious feature: It’s wireless. As in no wires (except of course the hydraulic brake cables). In a wireless world, why do our bikes still look like a phone switchboard from the 1940’s? Now they don’t have to. Internal cable routing does a great job of hiding shifter cables, but you can still see them poking out in various places – and of course you still have to adjust them regularly. 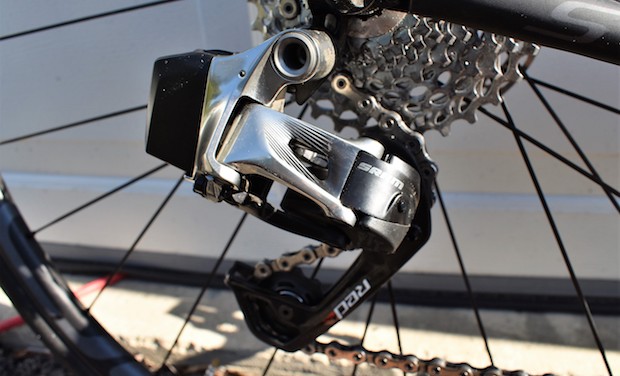 Aesthetics aside, SRAM’s shifter levers send wireless signals to the derailleurs on their own proprietary protocol – not Bluetooth or ANT+. This eliminates and concerns over interference but still provides almost-instantaneous shifts. While the wired systems do shift a hair quicker, the delay here is still all-but unnoticeable, and in no way impedes the performance or my impression of the product. Any delay is negated by the fact that SRAM’s levers require an easier, shorter push to engage a shift; while I’d regularly “under-push” Shimano’s lever and miss a shift, this has happened only a few times in all those miles with the eTap.

But it’s the intuitive operation of the shifting that most surprised us, although again, this is not new to HRD. Shimano, Campy, and SRAM have always had different shifting configurations, and frankly I was not a big fan of the mechanical SRAM setups in the past. They were difficult to push and I never got used to using the same lever for both up and down shifts. That has given way to my now-favorite system in the eTap. Each brake lever has one shift lever attached. Push the right side for a harder gear (on the rear cassette) and the left for easier. This makes sense since pushing with your right hand moves the chain to the right. But what surprised me most was shifting the front derailleur. To do so you must hit both levers simultaneously. At first I thought this would be tricky to remember, but I almost instantly adjusted to it and it feels completely natural now. So much so that when I go back to other systems I find myself hitting both sides for a front shift. If the shifting is a bit off, simply press the adjustment button (on each lever) and depress the lever for micro adjustments. 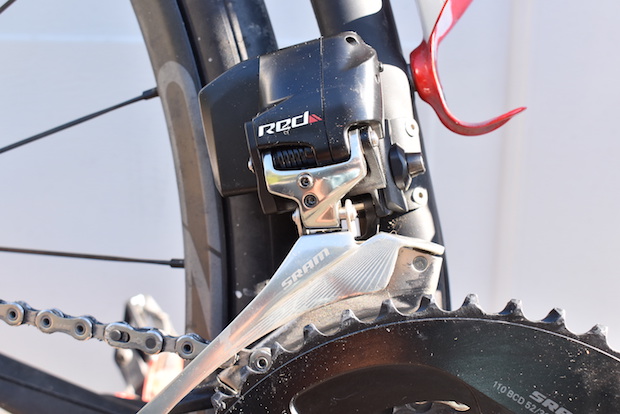 But what really grabbed us is the so-called “Blip Shifters,” which are tiny buttons you can mount anywhere on the bars as remote shifters. These are not wireless, but the thin wires can be run under the tape and plug directly into the brake lever housing. When plugged in, a quick thumb press lets you shift in the same configuration as the levers. Of course the levers remain fully functional as well. We had the Blip Shifters mounted on the top, just next to the stem, so we could shift without moving our hands. This may sound superfluous, but when climbing or even descending you do so on the hoods. Additionally, on rough terrain like cobbles or gravel roads, there’s no need to change your grip to shift. They’re also super handy for aero bars – just clamp them to the bar ends for effortless shifting in your aero tuck. But wait, there’s more; both lever housings have two inputs, so you can run two sets simultaneously, wherever you need that access. 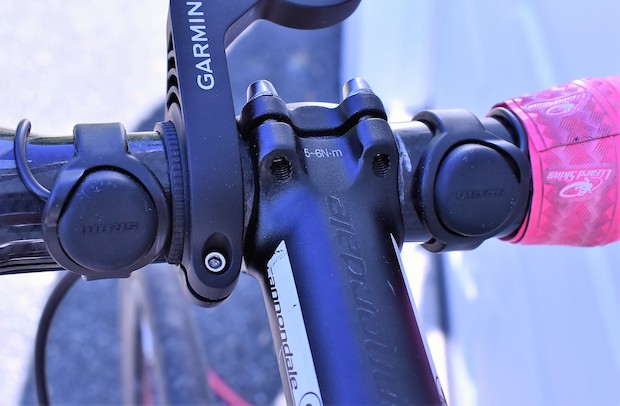 Another key difference between eTap and Di2 is in the battery system. The Di2 battery is generally stored inside the seat tube, cleverly hidden away but difficult to access for charging and installation. On top of that, external batteries require a separate mount and can be clunky. What makes this especially worrisome is if the single battery dies on the road, you’re SOL – and suddenly a single-speed rider. The eTap system features two batteries however, one each for front and rear. They mount directly onto the derailleurs with a simple click and can easily be removed for charging anywhere you prefer. And if one dies on the road, you’ve got a backup that at least allows you to still power your rear gears so you have 11 speeds to get home.

While this is a reassuring feature, it’s extremely rare that it actually happens. In all my years riding e-shifting systems and riding with others who use them, I’ve only heard a couple nightmare stories about battery loss. Usually it is the riders themselves that take the blame, saying they knew the batteries were low but forgot to charge them. After my 600-700 miles in three months, the level was “red” for the first time, which means they had only 5-15 riding hours left, based of course on how often the rider shifts. Checking that level is so simple that there’s no excuse for running out – just touch the button once on each derailleur and the light will be green (15-60 riding hours), red (5-15) or flashing red (under 5). 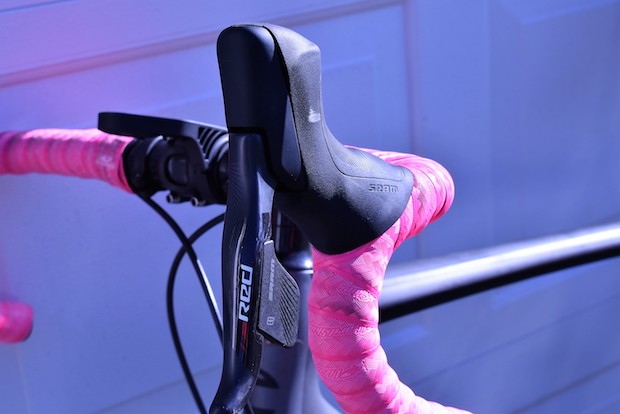 Aside from those major features, eTap HRD has some other minor, yet still key, differences that make it a favorite. Take the brake levers for instance: They’re more ergonomic than Di2, with a larger “handle” for a stronger grip when out on the hoods. Both the reach and free stroke (how much you need to pull the lever before the pads engage) are easily adjustable, so the rider can dial the action to his/her needs and preferences. Dura Ace Di2 also has this adjustability, but to a lesser degree, and they generally have too much free stroke for our preferences, even when adjusted. Power and modulation are sufficient for most road riding, but we’d prefer some more power on steeper descents. Overall we generally find the braking power and modulation superior on Shimano systems, although that’s much more critical in MTB and gravel riding than on road.

Another nice benefit is the simple bleeding process for the eTap system. Bleeding is always a pain in the arse, but SRAM provides everything you need for the process, and there are no open cups to balance, as with many systems. Everything is self-contained in two syringes, and attaching them is surprisingly simple. We had some leakage initially from the cap that inserts into the hydraulic cable, but we reinstalled it and it’s fixed. These plugs are supposed to be threaded for even easier insertion, which probably would have prevented this problem. But ours came with press-in plugs which were much tougher to install. 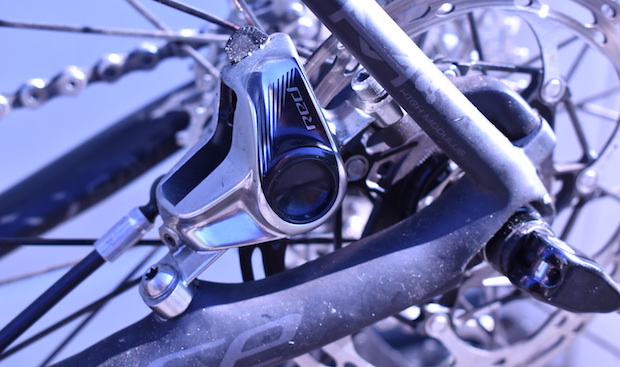 I’ve long said that while I’m a huge fan of electronic systems in general, I wouldn’t buy a bike with e-shifting (although I’m always happy to borrow one!) due to the concern of running out of batteries and shifting issues I’ve had in the past. More importantly the difficulty in setting up electronic shifters and/or swapping them to a new frame fed my skepticism. Plus, I was holding out for disc systems. SRAM’s eTap HRD system brings hydraulic braking and incredible simplicity to electronic components – all in a lighter and much more aesthetically pleasing package. The next time I buy a new bike, it will absolutely include these systems. Well, provided I can afford the price tag.

Prevent Cramps From Ruining Your Next Run or Ride with HOTSHOT