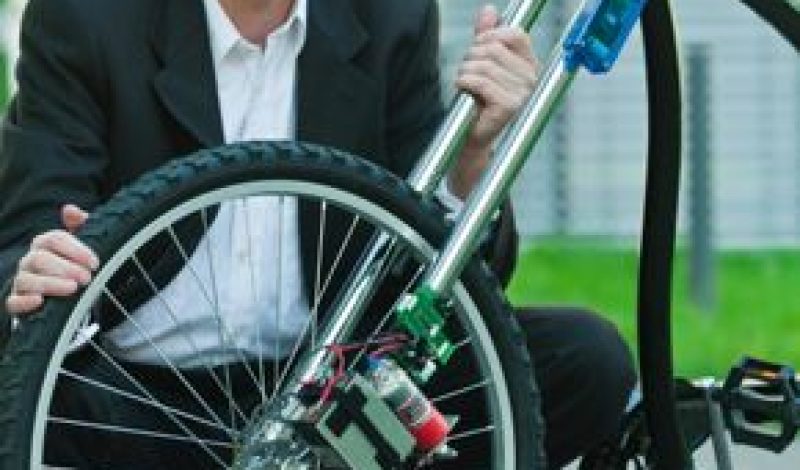 Computer scientists at Saarland University in Germany developed a wireless bicycle brake and demonstrated its efficiency on a cruiser bike earlier in October. The bicycle (pictured, with Saarland University Professor Holger Hermanns) does not feature a protruding brake lever to control the front brake, or a brake cable.

Hermanns, who holds the chair of Dependable Systems and Software, and who developed the wireless bicycle brake, said “Wireless networks are never a fail-safe method. That’s a fact that’s based on a technological background.” Nonetheless, the trend is to set up wireless systems that, like a simple bicycle brake, have to function all the time.

“The wireless bicycle brake gives us the necessary playground to optimize these methods for operation in much more complex systems,” Hermanns said, adding that his research group examines the brake prototype with algorithms that normally are used in control systems for aircraft or chemical factories. As a result, they found out that the brake works with 99.999999999997 percent reliability. “This implies that out of a trillion braking attempts, we have three failures,” Hermanns said. “That is not perfect, but acceptable.”

To brake with the wireless brake, a cyclist just clenches the rubber grip on the right handle. The more tightly the grip is clenched, the harder the disk brake on the front wheel works. Integrated in the rubber grip is a pressure sensor, which activates a sender if a specified pressure threshold is crossed. The sender is integrated in a blue plastic box the size of a cigarette packet which is attached to the handlebar.