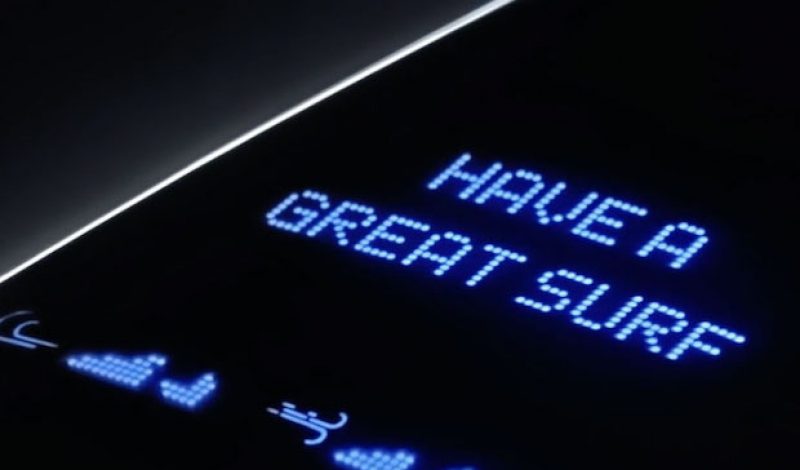 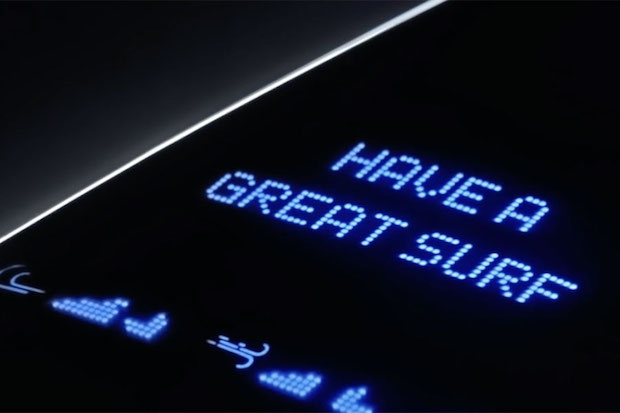 In an era where technology is increasingly encroaching on our lives, Samsung is boldly taking a leap forward with a Smart Surfboard. No, it’s not April 1st, and you’re not reading The Onion; there is now a surfboard that behaves like a smart device.

The Samsung Smart Surfboard is a prototype designed to let you be “in touch with your coach. And all of [your] fans;” – provided you’re World Surfing Champion Gabriel Medina, anyway. The entire board is actually an LED illuminated touch screen hub that a smartphone can be plugged into. There is a slot on the rail where you the phone is inserted, connecting with the electronic innards of the board. On top and along the surface there are also touch sensitive areas that receive signals with skin contact (no word how this is accomplished in the water yet).

The Samsung Smart Board sends and receives messages and live updates. For example, in a YouTube video (see below), the board displays text messages sent by Medina’s Father and Coach. But the idea behind the smart surfboard goes well beyond just messages and alerts. It can also displays up-to-the-second wave and water conditions, as well as weather reports, to the rider as well. Presumably, it also has all the gyros and accelerometers to record the sessions for three-dimensional re-creation later as well. That data may even help us understand how boards and people are tossed around under crashing, violent water as well, making surfing a safer sport.

On the one hand, the board is an interesting example of where we can take technology; on the other, it has not been received well. Top quality boards already cost hundreds of dollars, and they do tend to break often especially in big surf. Taking into consideration how much something like this would cost, then add to it a latest generation Samsung phone, and the price tag seems prohibitive.

In addition, much of the appeal of surfing has always been the solidarity and peace of mind that the ocean provides. But with this board the sport simply becomes yet another inevitable social media outlet that will force professional athletes, and recreationists to Tweet, Instagram, Snapchat, Periscope, or in whatever way, post their current gnarly barrel.

“Nah, you catch this one brah, I gotta post this sweet pic on my snap! hashtag whiptit!”

It’s not all bad, though, because new technology drives innovation. I encourage experimentation and respect Samsung’s bold statement about a sport that has seen relatively modest technological improvements since it has gained popularity. I look forward to what possibilities this might open up.