Taking the Hobie Kayak Fleet for a Test Run 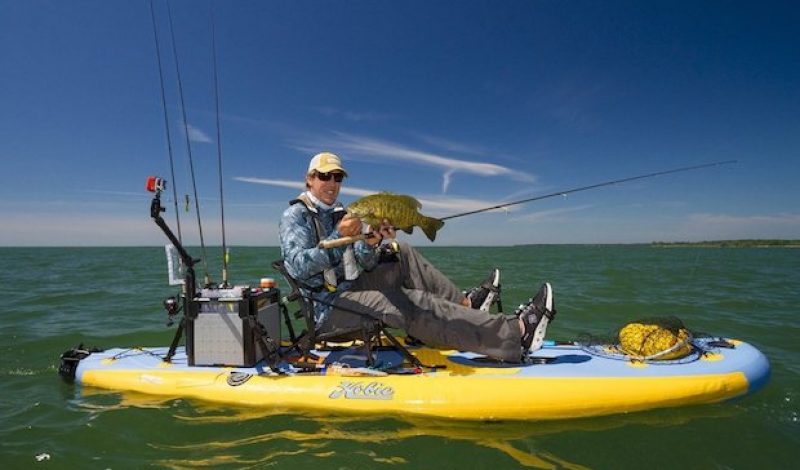 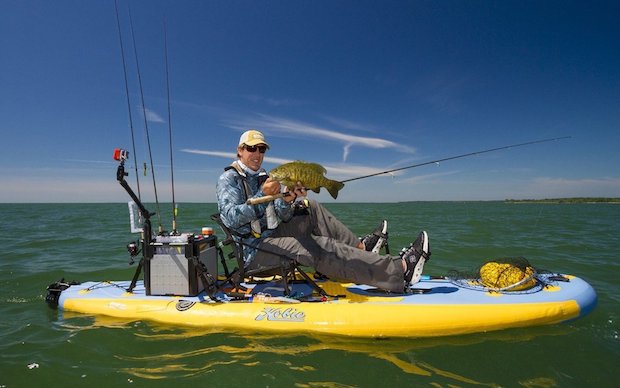 There is nothing quite like a Hobie kayak. At least, that was my takeaway after spending some time in several of their boats this past weekend. That’s when I traveled to Kentucky Lake to check out the company’s fourth annual Hobie Bass Open event and take a couple of their kayaks out for a test drive. In the end, I came away quite impressed with everything that I saw.

For those not familiar with Hobie, the company is extremely popular with the kayak fishing crowd. Most of its boats include a host of features that anglers love, including rod holders, ample onboard storage, tackle management systems, space for a live tank, and much more. Some of the larger kayaks are even stable enough to allow fishermen and women to stand up without fear of tipping over, giving them the ability to cast more accurately and efficiently.

But, the kayaks have a number of other features that help them stand out from the competition as well. For example, every model that I tested came equipped with the Hobie MirageDrive, a system that allows the user to pedal – rather than paddle – the boat around. Using your legs much like you would on a recumbent bike, you can propel yourself forward with surprising ease. The MirageDrive is a true revelation, with newer models even having the ability to pedal in reverse. That feature comes in very handy when navigating through tight spaces on lakes and rivers. 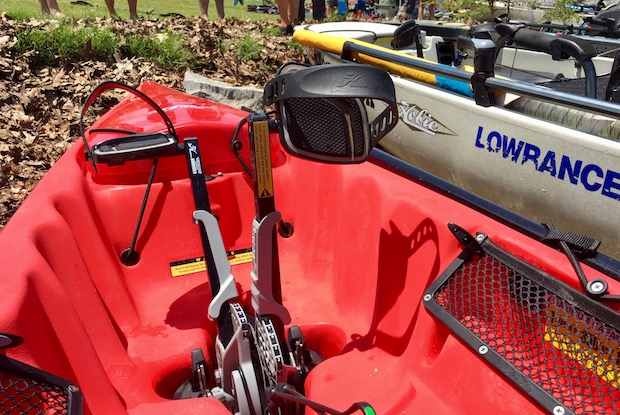 Each of the kayaks also included a built-in rudder that was connected to a small handle that could be turned in the direction you wanted to go. When combined with the MirageDrive, this made the whole experience extremely easy, and gave it a very different feel from a traditional kayak. All of the Hobie boats can still be paddled if you prefer, but the MirageDrive gives them a level of versatility that is hard to beat. This is especially true for anglers, but also for recreational paddlers.

Each of the models I tested came with the MirageDrive, rudder control, and a comfortable and highly adjustable seat. They had a wide array of onboard storage options, with most featuring compatibility with Hobie’s accessories as well, including the H-Crate and even the Mirage Sail Kit. This allowed for an impressive level of customization as was seen on many of the kayaks used by anglers competing in the tournament.

So exactly whcih boats did I try and what were might thoughts? Lets take a look.

This model isn’t a kayak at all, but is instead an inflatable stand-up paddleboard that has been designed to work with the MirageDrive and Hobie’s other various accessories. The Mirage i11S is fast, nimble, and very lightweight, making it a good option for those who want to get out on the water as quickly as possible. I was impressed with how well it accelerated, although it didn’t track quite as nicely as its hardshell siblings. I also felt the impact of wind and waves on this boat more than I did the others, although the i11S handled those challenges well overall. Since this is a SUP board at heart, anglers can stand on it fairly comfortably although it doesn’t have the same level of stability of some of the other kayaks I tried. But, it does have the added bonus of functioning just like any other stand-up paddleboard once all of the various accessories are removed. ($2,149) 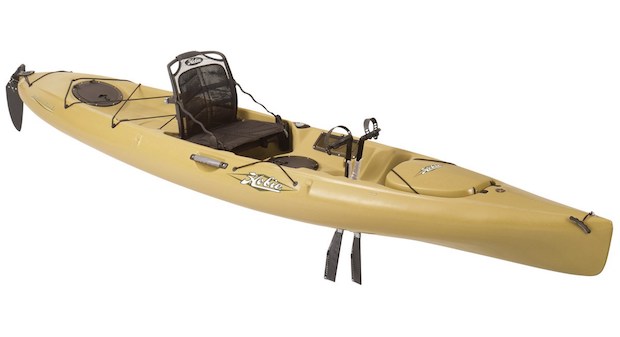 Another fast and agile boat, the Mirage Revolution 13 feels a lot like a sport kayak in terms of performance. It includes a few fishing-specific features, such as two rod holders and plenty of storage space for tackle, but it was probably my favorite all-around choice for simply cruising around on the water. The Revolution’s durable hardshell allowed it to track nicely, even in choppy conditions. While it felt stable at all times, this isn’t a model I’d want to try to stand up in. Of all of the Hobie kayaks that I tried, this was the one that was the easiest to paddle when not using the MirageDrive. ($2,499) 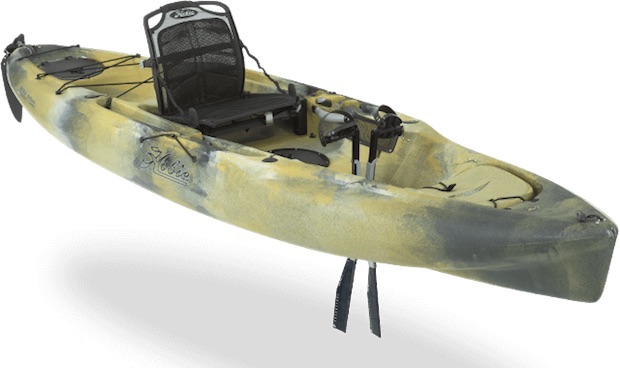 Hobie’s most popular fishing kayak, the Mirage Outback is an excellent blend of maneuverability, stability, price, and features. It has everything an angler would want out of a smaller boat, including multiple rod holders, large open cargo areas, built-in storage, and more. I found the Outback to be a bit slower and more ponderous when compared to the Revolution 13, but it was still easy enough to get it up to speed and steer it in the right direction. The added stability that it offers over the Rev 13 allows anglers to stand up when casting, which is a major benefit for that market. 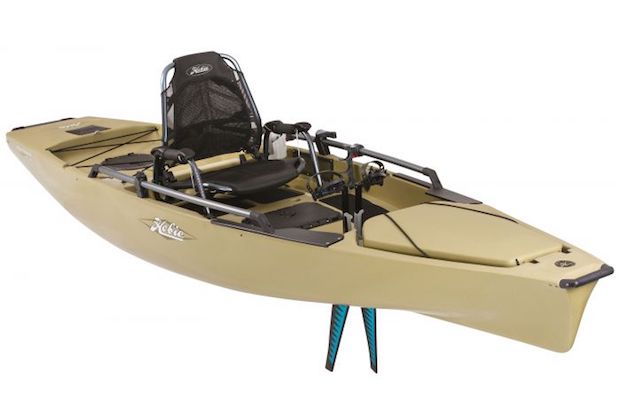 For me, the Mirage Pro Angler 14 was the ultimate fishing kayak that I tested. It performed more like a small fishing boat rather than a kayak. In addition to the built-in rudder it came with a skeg to aid with tracking. The Pro Angler is bulkier and heavier than the other models, which made it a bit slower and less maneuverable, but the MirageDrive still makes it very easy to pedal around and position in a proper place. The reverse option on the drive system came in handy a few times when testing this model, allowing me to easily back it away from obstacles when its turning radius couldn’t quite get me out of a tough spot. Super stable, the Pro Angler not only allows you to stand up, but actually walk around a bit. This came across as the model for the serious kayak fisherman. ($3,449) 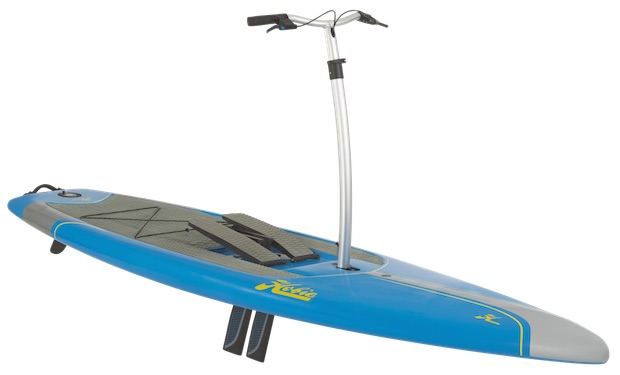 The last model from Hobie that I tested was the Mirage Eclipse, which is a unique watercraft to say the least. This model falls into the “pedalboard” segment, as it is essentially a stand-up paddleboard equipped with its own special version of the MirageDrive. When using the Eclipse, riders actually stand up and hold on to a set of handlebars like a bike. In order to propel forward the rider needs to push down on a set of pedals much the same way as a step machine at the gym. To turn, simply pull a grip that is integrated into each of the handlebars.

The Eclipse is a lot of fun and a good form of exercise. I found it more challenging to pedal around on the water compared to any of the other kayaks, although once again it didn’t take too long to get it up to speed. The board itself turns a lot more slowly than the other boats on this list, although to be fair it doesn’t really fall into the same category as any of those other options either. Stability isn’t an issue as the Eclipse is meant to be walked on, although it helps to have good balance and the ability to roll with the sudden movements of the board. All in all, this one was a lot of fun, and I see it being extremely popular at resorts. ($2,499)

If there are a couple of drawbacks to the Hobie kayaks that I tested it would be price and weight. These models cost more than a standard kayak from another company and they are heavy enough to make it a challenge to get them in and out of the water. While those are two significant caveats, it is also important to point out that these products aren’t meant to be like just any other kayak on the water. They are purpose built with fishing in mind first and foremost, which puts them completely in a class all of their own.

That said, as a non-fisherman who has now spent some quality time in several of Hobie’s products, I can honestly say I’d love to have one for kayak touring. They are just so easy to maneuver around and they are simply a lot of fun.