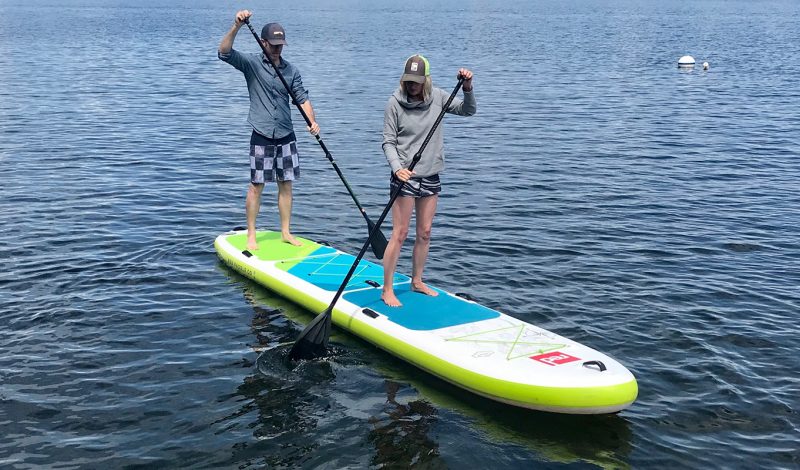 Tandem anything can be a little cheesy. Take tandem biking. Put two people on one bicycle and you quickly become a two-person snicker magnet. And for what? But the idea of tandem stand-up paddling had been growing on me—one giant board, loaded with gear and supplies, with a course set for a distant lake island with a willing partner. So when Red Paddle Co. pitched me their beastly new, two-person 15-foot Voyager Tandem MSL paddleboard—a super-stable mega-board built for cruising with heavy loads and twin deck pads, I wanted to find out whether two paddlers could really be better than one.

Here are nine reasons tandem paddleboarding is awesome and one reason it stinks. 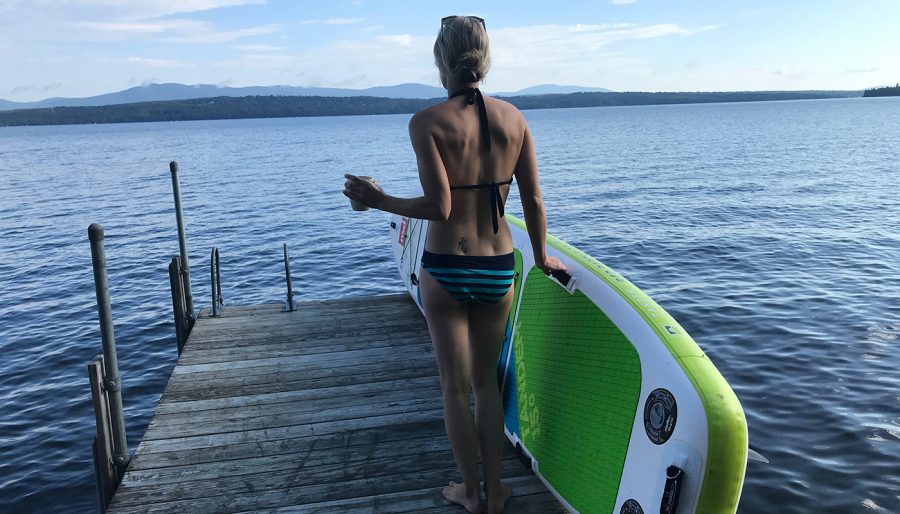 For all the fluff about “performance” SUPs, the truth is 99-percent of the time you just want to relax and cruise. And there’s nothing more relaxing and cruisier than a 15-foot board built to be as stable as a dock.  The Voyager Tandem is an inflatable monster. It’s 34 inches wide and a fat eight inches thick, meaning it can handle a ton of weight and it’s damn near impossible to tip.

With a 9-inch removable fin and two small rudder fins, the tail is fairly well locked-in for straight ahead paddling, especially with a second paddler weighing down the small rudder under the nose. Standing in the middle of the board, without a co-paddler, it will take seven or so strokes to pull the nose from 12 o’clock to 1 o’clock. That’s a pretty straight-driving board. 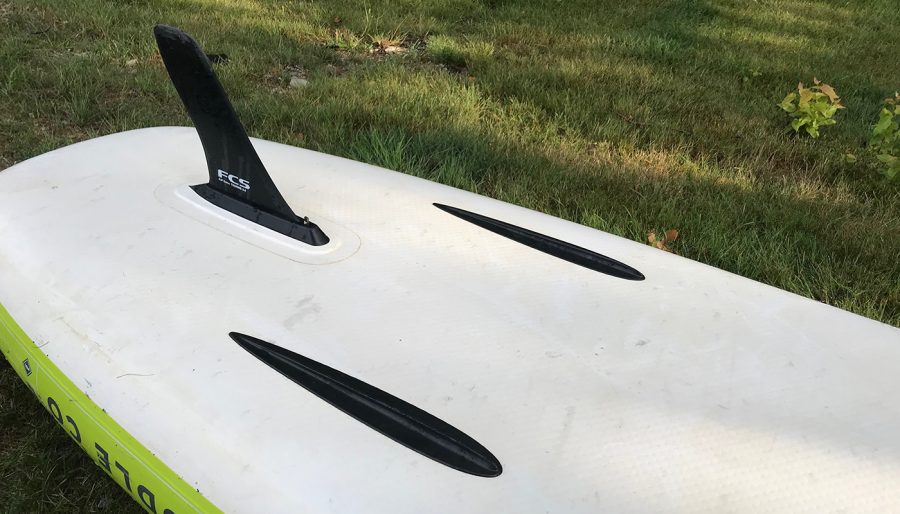 Turning isn’t all that hard, though, and the tail is stable enough that if you stand far back on the stern, you can spin a 180 fairly quickly. Even with another 10-foot board around, the Voyager Tandem quickly became our board of choice for the wide-open, inland water we were testing it on. It is OK in some light chop, too, although it’s not what I’d want to be maneuvering in a crowded, busy harbor.

The Voyager Tandem fairly heavy at 38 pounds, but with all its accessories it slips just under the 50-pound oversize luggage limit and comes in a nice roller bag for moving through airports (with shoulder straps for trail carries). It comes with a powerful dual-chambered Titan pump that makes it fairly easy to bring the board up to its recommended 18 to 20-psi pressure (although I still prefer the lazier, electric SUP pump method. 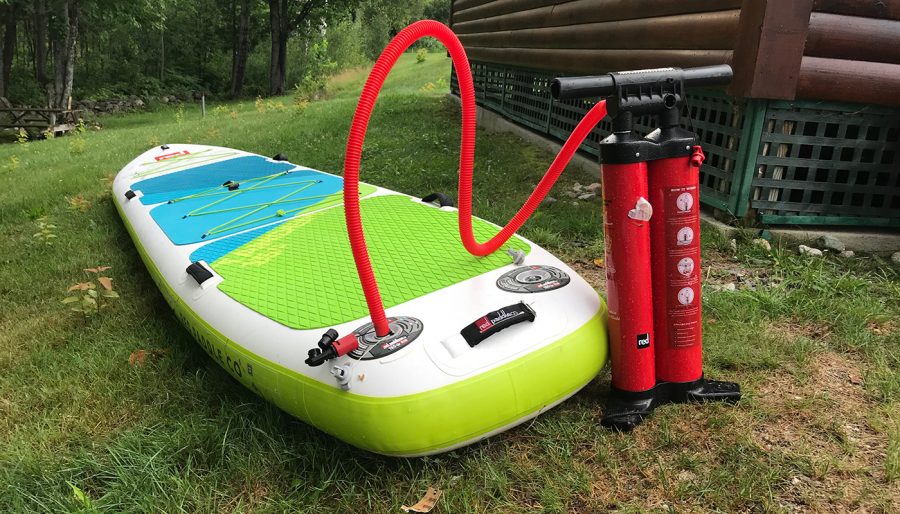 2. You Can Bring Gear

Loading anything heavy on a one-person board can be an awkward load. On a tandem board, you can stow a fair bit of weight in the middle of the board and on the nose. The Voyager Tandem has two sets of gear tie downs and lash points. If we had more time with this board, we’d be cooking up plans for a summer paddle camping trip. 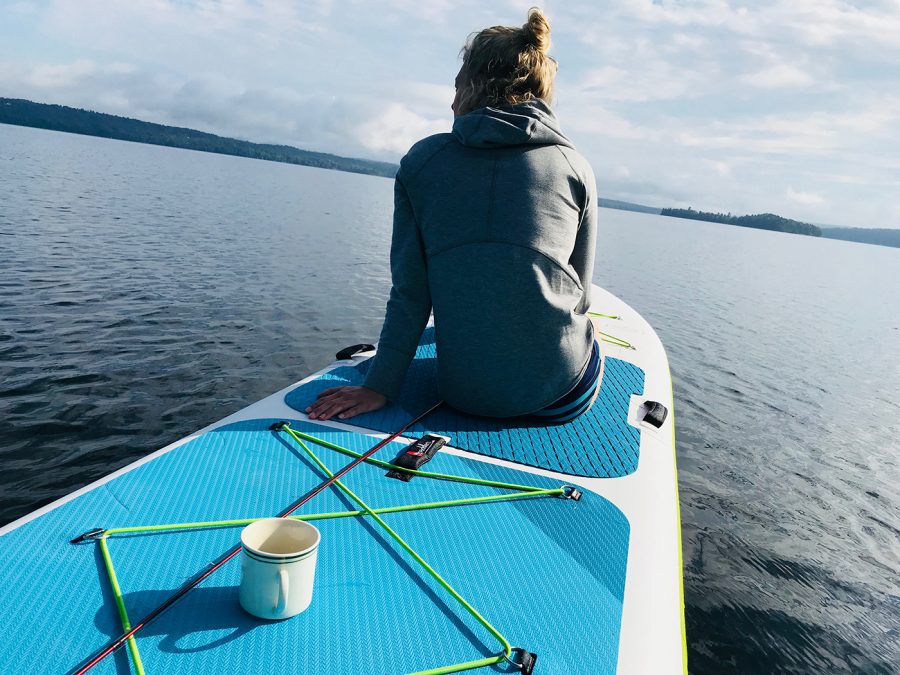 Despite its name, the Voyager Tandem isn’t really limited to two people. In a fleet of dinghies, boards and kayaks, it pretty quickly becomes the party board. We had three adults and a five-year-old on it for an afternoon lake cruise and it performed quite well.  The middle of the board has an additional deck pad, and you can remove the tie-downs to create an extra place to stand. 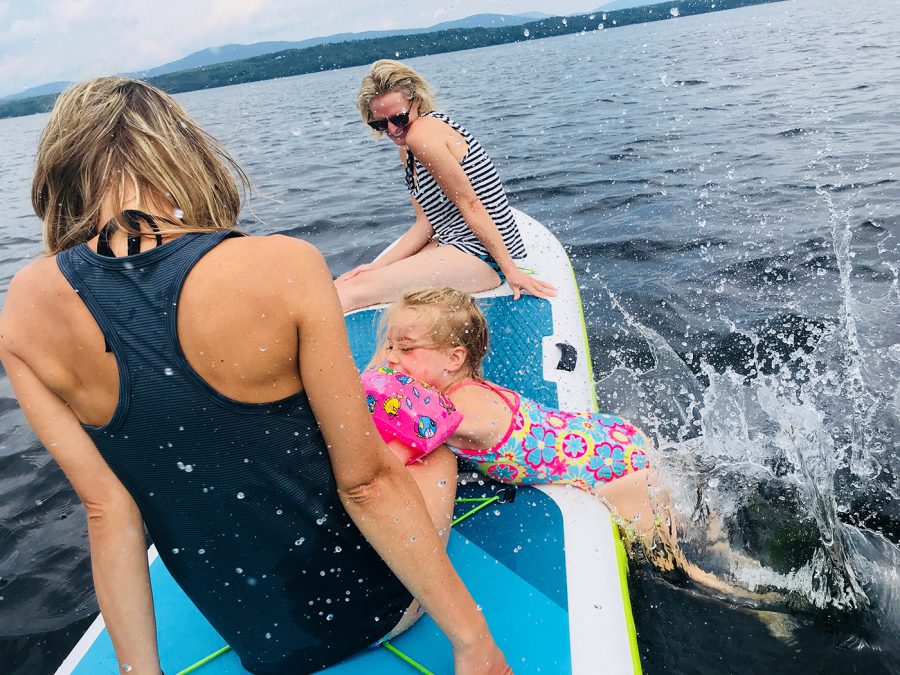 As with any heavily loaded craft, be respectful of the winds with more passengers. It’s not easy to paddle into a stiff headwind with a few hundred pounds onboard, or to keep on course with the wind pushing hard on the bow and the weight of a passenger up there.

Admit it. You only do SUP yoga for the photos. And it’s pretty easy to do yoga on a board that’s more like a dock than a paddleboard. You can even do headstands. Go ahead, get #instafamous. 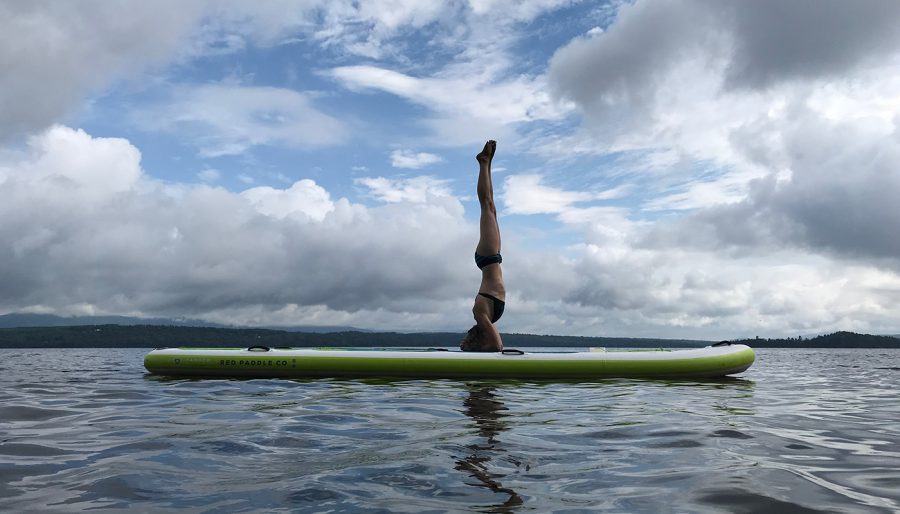 Well, actually they probably hate it. But they want to go wherever you go. As long as they have a PFD or you’re sticking to shallow water, you can take them with you. That beats them running along the bank barking madly like ours will if we leave him behind. And since the Tandem is built with a pretty much indestructible, snare-drum-tight deck, you don’t really need to worry about a claw puncturing it. 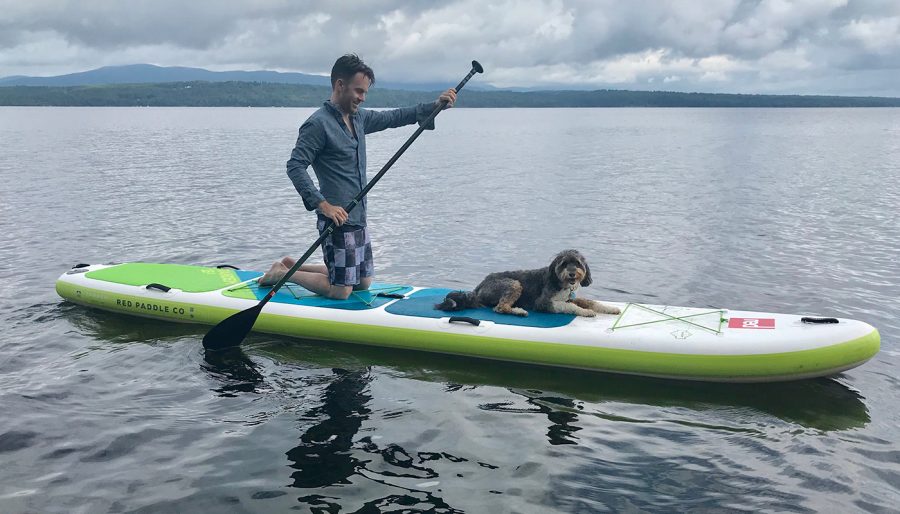 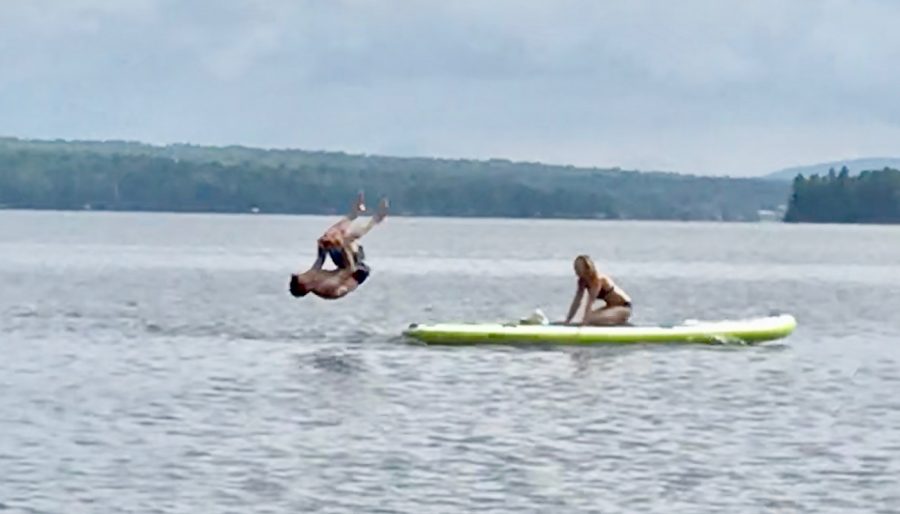 7.  You Can Load It Up With Things You Shouldn’t 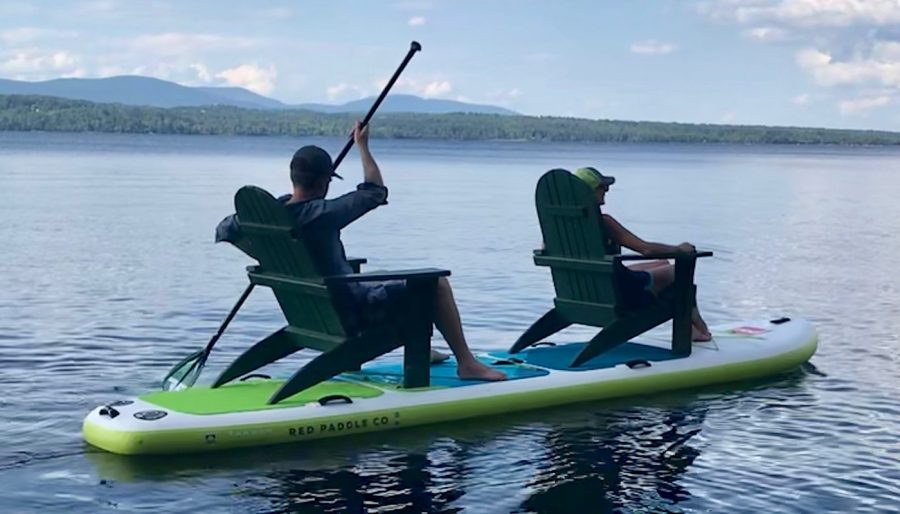 Like, um, 30-pound wooden Adirondack chairs that do not float.

8. There Are Fish Out There

A standup is a great way to get into deeper water to harass the local fish. With a big board, you have a lot more stability for casting, retying, and fighting a whopper. I loved cruising around at dusk and not ever feeling like I was out of balance while focusing on the fishing. 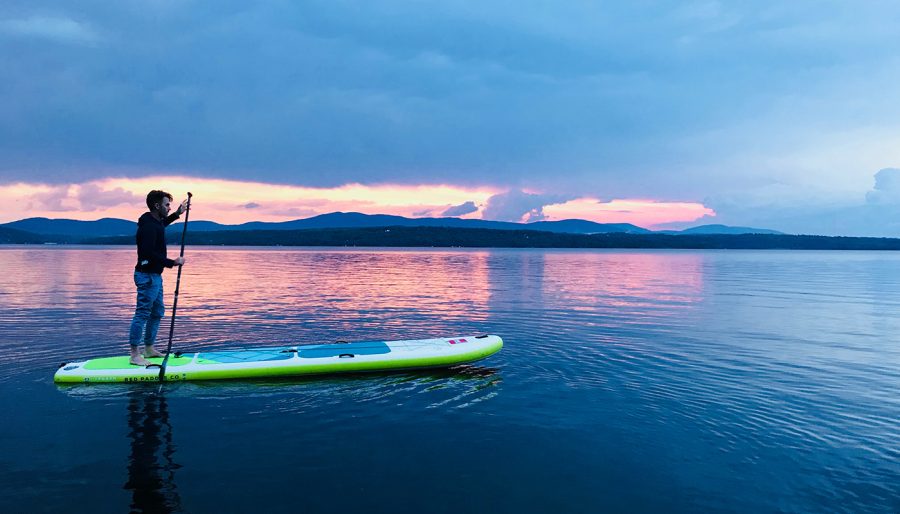 It’s a full moon. The water is still. There is just the two of you out under a star-splattered sky, there is no one in sight, and the board is very, very stable.

We’re going to skip the photos on this one.

And the one reason it sucks?

The main downside of tandem paddling is…tandem paddling. With two standing paddlers, you need to perfectly coordinate every stroke. If you’ve never tried it before, it takes a bit of explanation why.

On any paddleboard, each paddle stroke thrusts the board forward a few inches under your feet. When you are the solo paddler, you can predict when that that lurch forward will happen and you can lean into it to prepare. But when you are paddling with a partner, every one of their strokes lurches the board forward under you, which makes you fall backwards unless you were predicting it. When you are sitting in something like a tandem kayak or canoe, you don’t notice. But when you are standing, that little tug is much more dramatic and it can feel like someone pulling the rug out from under you. 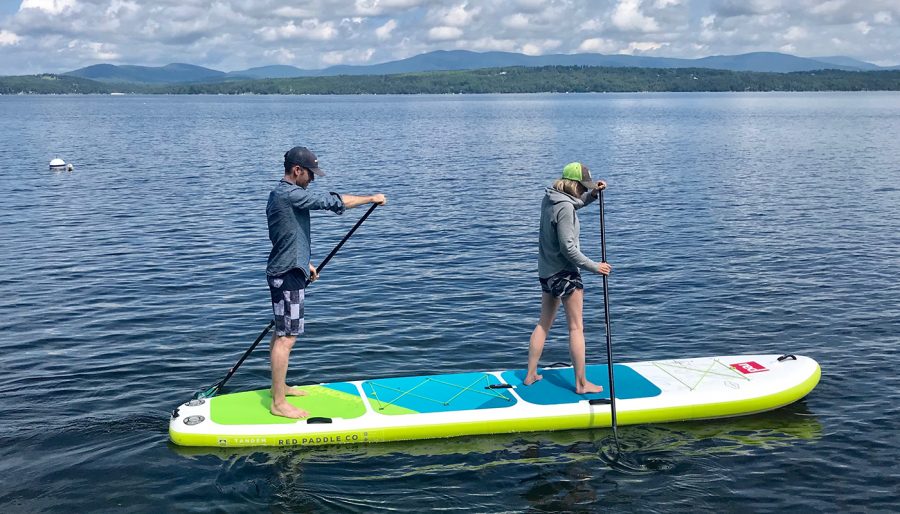 The best way to minimize the effect is to coordinate each paddle with your partner. That works pretty well, so long as each partner is paddling with about the same force. You can take a slightly more athletic stance if it helps, too. But it puts a lot of responsibility on the rear paddler to keep in time with the front paddler, who is looking forward and much more prone to getting pulled off balance. That’s some of the fun of paddleboarding—it’s not always balanced. But there is a bit of water torture aspect to being tipped backwards every few seconds by a poorly timed stroke.

“I think I’m done,” says my wife, sitting down after 20 minutes of co-paddling. I understood.

That sentiment wore off though, and after a while it’s pretty easy to get in sync and accept the bumps and lurches of board co-habitation.

The 15’0’’ Voyager Tandem retails for $2,000. It’s pricy, but highly recommended if you are looking for a family cruise ship. 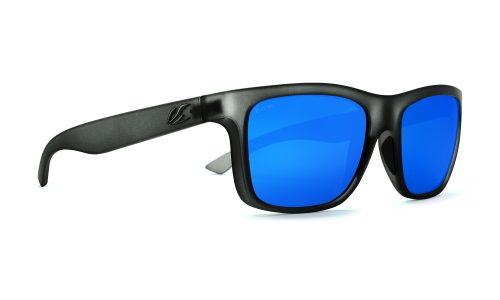