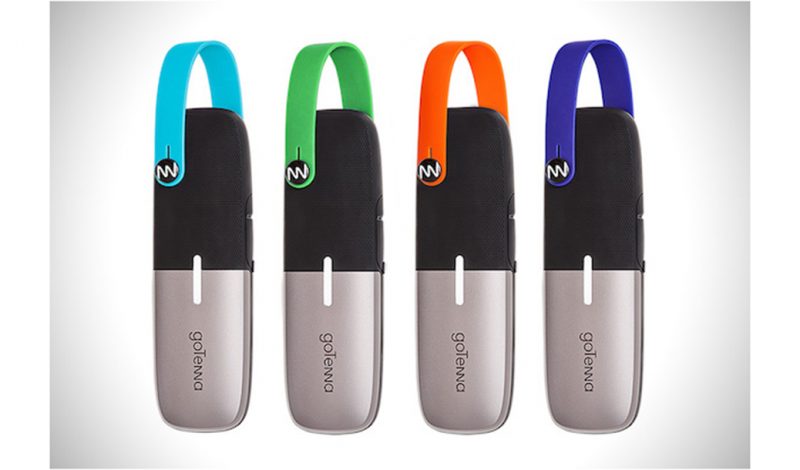 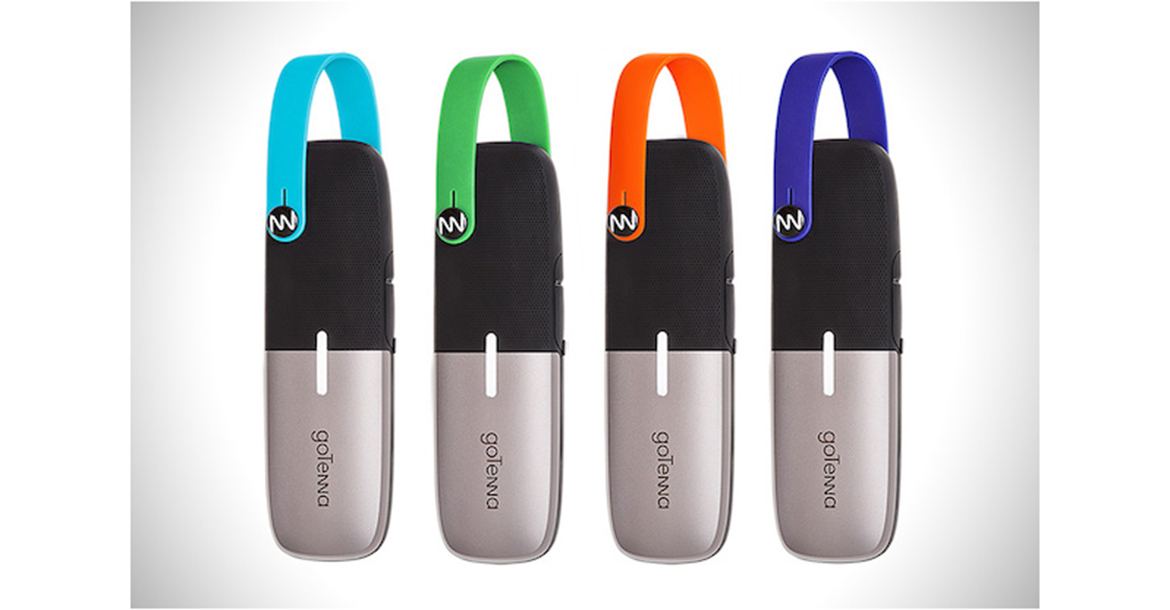 Back in December of 2015 we took a look at a new device called the goTenna. At the time, it was a revolutionary product that allowed users to send text messages directly to one another, bypassing the need for cellular coverage. Since then, goTenna has gone on to sell thousands of units, helping hikers, backpackers, adventure travelers, and others to stay connected while off the grid. Now, the company is launching its second-generation product, and we can confirm that it is a worthy successor.

The new goTenna Mesh includes all of the same features as its predecessor, along with some very important new ones. Like the original goTenna, the Mesh connects to your phone via Bluetooth and when activated it creates an ad hoc network with other goTenna users within range, allowing them to send text messages via the goTenna app (iOS/Android). Messages can be sent to individuals or groups (up to 10 users), with end-to-end encryption making the entire process highly secure. The app also provides delivery confirmations so you’ll always know if someone is within range and has received the message.

One of our favorite features of the original goTenna was the highly detailed maps that could be downloaded to the app for use offline. The device gives users the ability to share their locations on that map, making it much easier to find each other in the backcountry or even a crowded urban environment. This feature returns with the Mesh as well, working pretty much exactly the same as it did in the original. 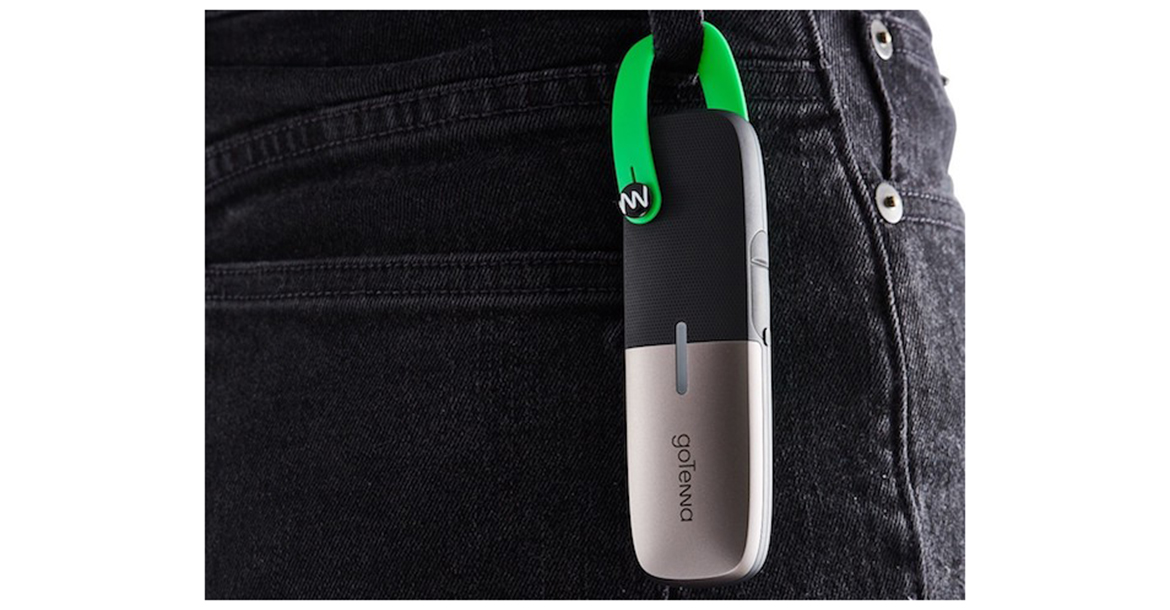 Where the second-generation goTenna begins to distinguish itself from the original model is in its ability to use Meshing technology. In a nutshell, this allows the device to not only act as a receiver and a transmitter, but also as a relay station. The goTenna Mesh has the ability to examine incoming messages and determine whether or not they are intended for the original receiving device. If they aren’t, it passes that message on to other goTenna Mesh units within range until the message reaches the intended recipient. This has the potential to greatly extend the range of the product, provided other Mesh units are in the area.

The ability to use mesh technology isn’t the only difference between the first and second-generation goTenna products. While the two models weigh almost exactly the same, the Mesh is about an inch and a half shorter in length, making it easier to store in a pack and less intrusive when carrying it around. Both models are powered by rechargeable batteries that are rated for 24 hours of use, but in our testing we found that the Mesh could actually continue to operate well past that mark. It was not uncommon for our test unit to run an additional 2-3 hours before needing a recharge, although it is important to keep in mind that heavy usage can bring that time down significantly. Recharge times for the device are about 1-2 hours depending on the power source.

The new goTenna device sports a 1-watt UHF radio inside, while the original goTenna employs a 2-watt VHF transmitter instead. On paper, that would seem to be a step backwards and could have potential impact on the range that messages can be sent. But, we’re told that the antenna found inside the Mesh is much more efficient, making up for the difference in power. 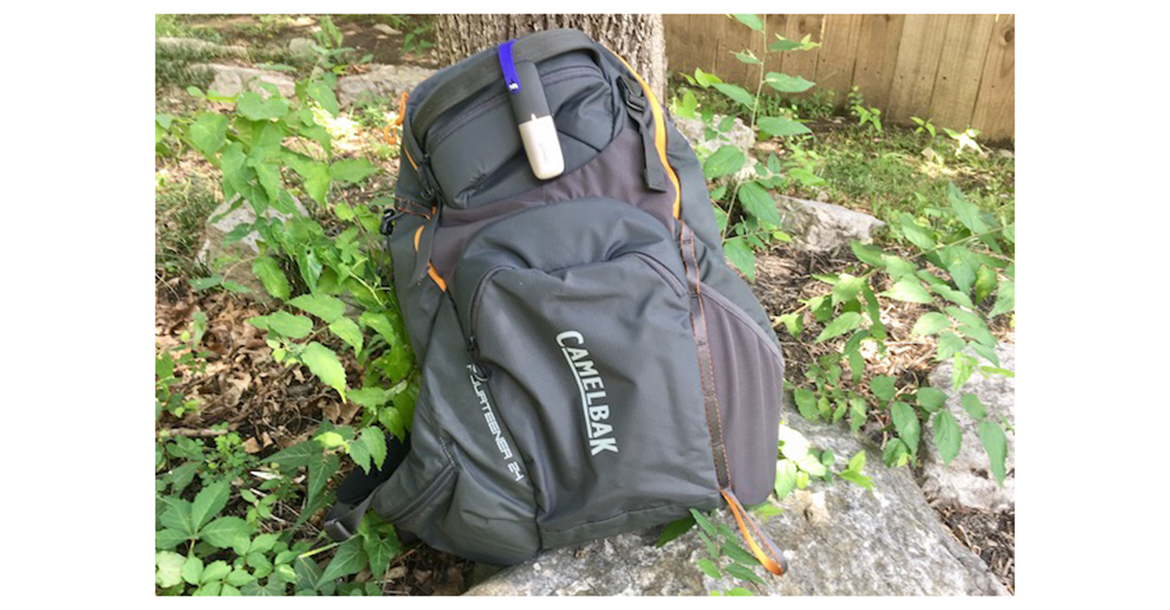 So, just how far can the goTenna Mesh transmit? That’s a tricky question that isn’t easy to answer. The company says that it can send messages and GPS coordinates up to 4 miles in open areas, but add in rolling terrain such as high hills or mountains, and that range can drop significantly. In an urban environment, interference caused by other radio signals and buildings can interfere with the range as well, bringing the total distance down dramatically.

We set out to see how well the goTenna Mesh performed in real world applications. We took a set of GMRS/FRS walkie-talkies as a reference point. The range of these radios are subject to the same interference as the goTenna UHF transmitter. But, how would the walkie-talkies stack up compared to the Mesh? As it turns out, not all that well. 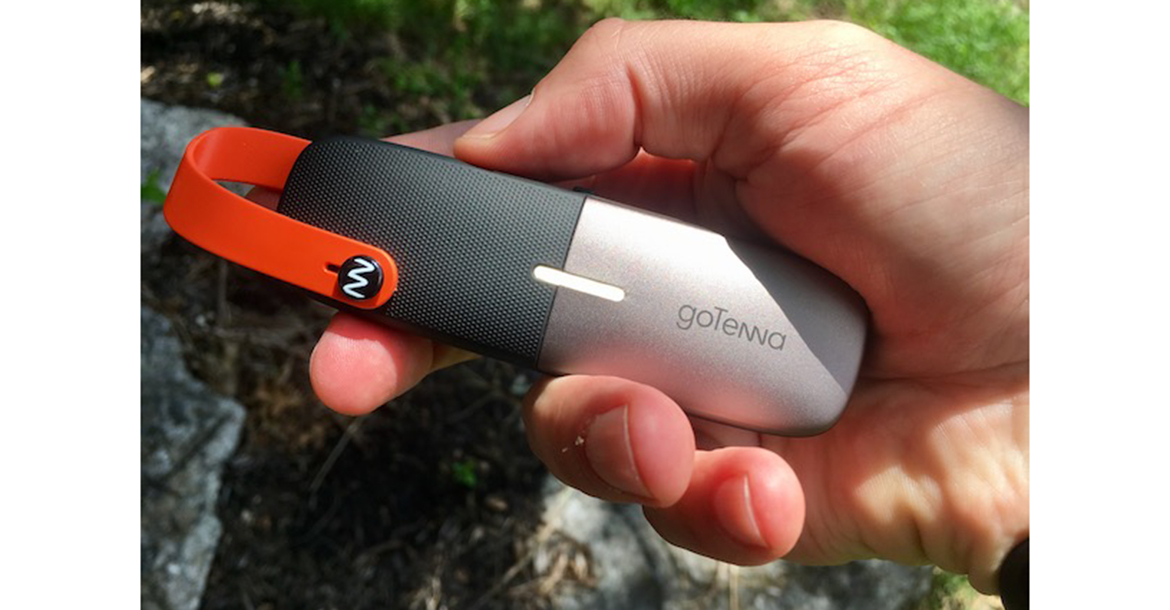 First, we started in an urban environment using point-to-point communications between two Mesh units. In the area where I live, it was possible to send messages as far as 1 mile before some sort of interference began to degrade the signal. It was about at that same distance, our walkie-talkies started to have issues as well, with the transmissions of other radio signals playing havoc with voice communications.

Heading out of town and onto a trail increased the range of both devices nicely, although the goTenna Mesh proved more effective. We were able to send messages from as far away as 2.5-3 miles using the goTenna device, but began running into issues with the walkie-talkies at about the 1.5-2 mile range. Obviously, your mileage will vary depending on the terrain you are traveling through and the position of the users in relation to one another. Overall we were pleased with the performance of the goTenna device, which is lighter than the two-way radios we used and allowed us to always know whether or not anyone received the message thanks to the app’s delivery confirmation feature. When broadcasting with the radio it was often impossible to tell if anyone on the other end heard the message.

Of course, the Mesh has an extra trick up its sleeve that can help extend its range much further. An unpaired Mesh unit can be set to “relay mode,” giving it the ability to serve as an independent transmitter. This allows users to leave a device at a campsite or other strategic positions and have it automatically pass along messages. Better yet, multiple Mesh units can be distributed across an area to create a whole broadcast network. 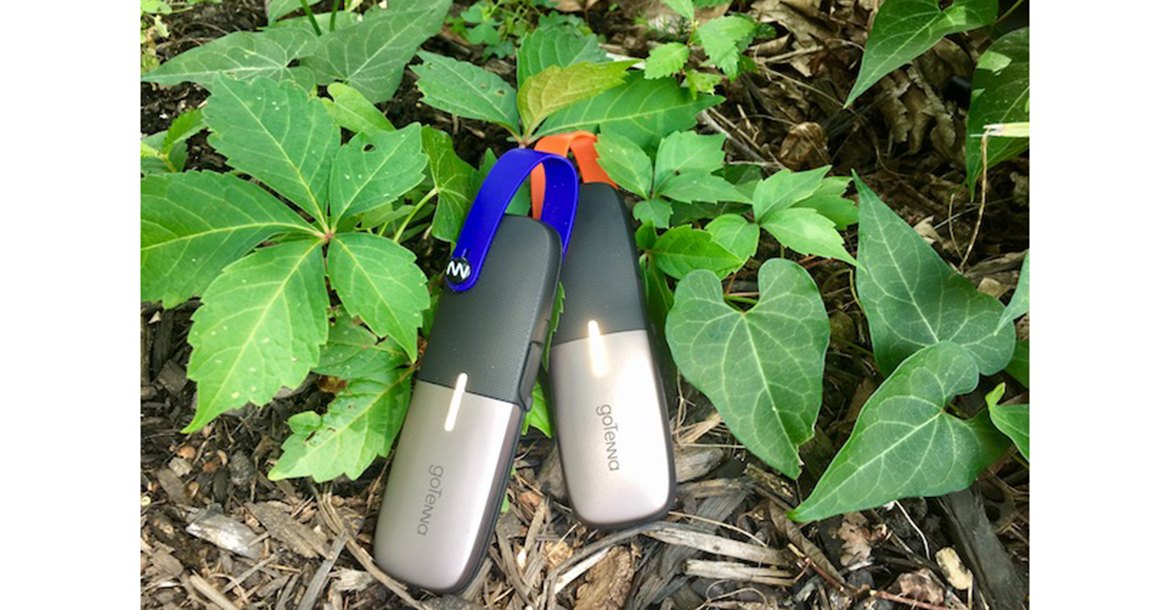 When using a spare Mesh unit set to relay mode we weren’t quite able to double our range, but we could message one another from as far away as 4.5-5 miles. All things considered, that’s fairly impressive, but again, keep in mind that distances will vary dramatically based on a wide variety of variables. The important take-away from this test was that meshing works, and it works surprisingly well.

With that in mind, goTenna has set up a new website at imeshyou.com where users can register their Mesh units as nodes and keep them continually active to help expand the active network in a given area. Essentially, these devices are always in relay mode, potentially expanding the available coverage dramatically. Looking at the map of where I live, there are more than a dozen units already registered, which bodes well for the adoption of the product in general and its potential use as a communications device moving forward. 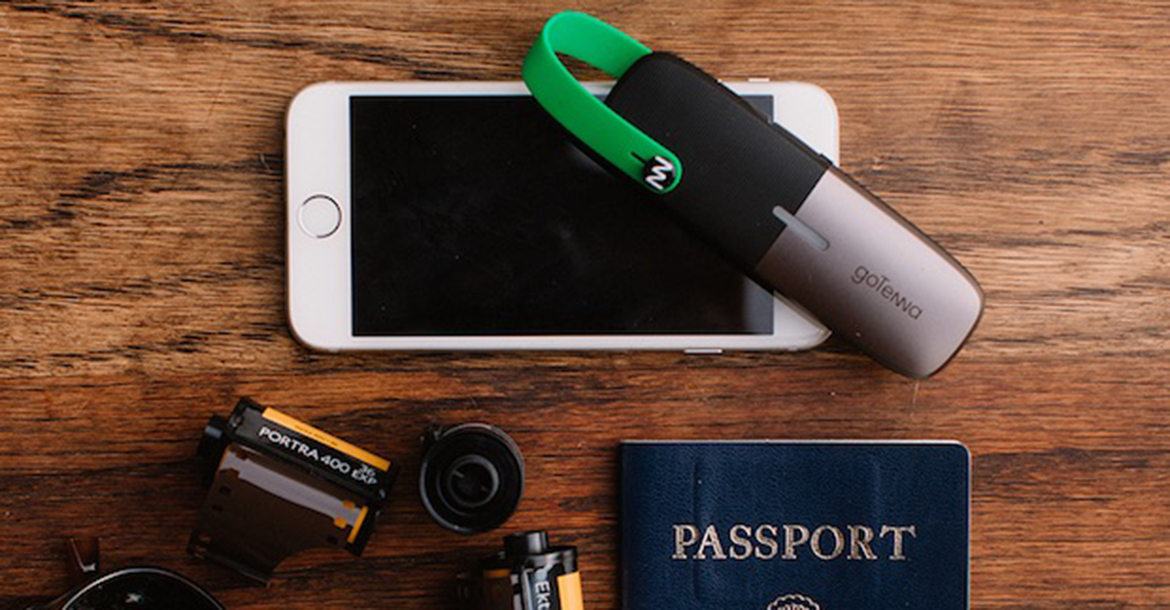 The goTenna app has seen a steady stream of upgrades since the first model shipped and it is still as easy as ever to navigate. Sending messages to your contacts is a breeze, and the app’s interface even resembles some of the other popular messaging apps available for iOS and Android. I found it very intuitive to use, including the options for downloading maps and sharing GPS locations. I would expect goTenna to continue refining the software over time, adding new features, squashing bugs, and making improvements to the overall interface.

When we reviewed the original goTenna, we found it to be an excellent tool for staying in communication in areas without cell service. The goTenna Mesh improves on that formula in pretty much every way, delivering a more powerful and capable device that offers improved range and reliability. That makes it extremely easy to recommend for travelers, backpackers, preppers, or pretty much anyone else who has a need to stay in contact with others while in remote areas. 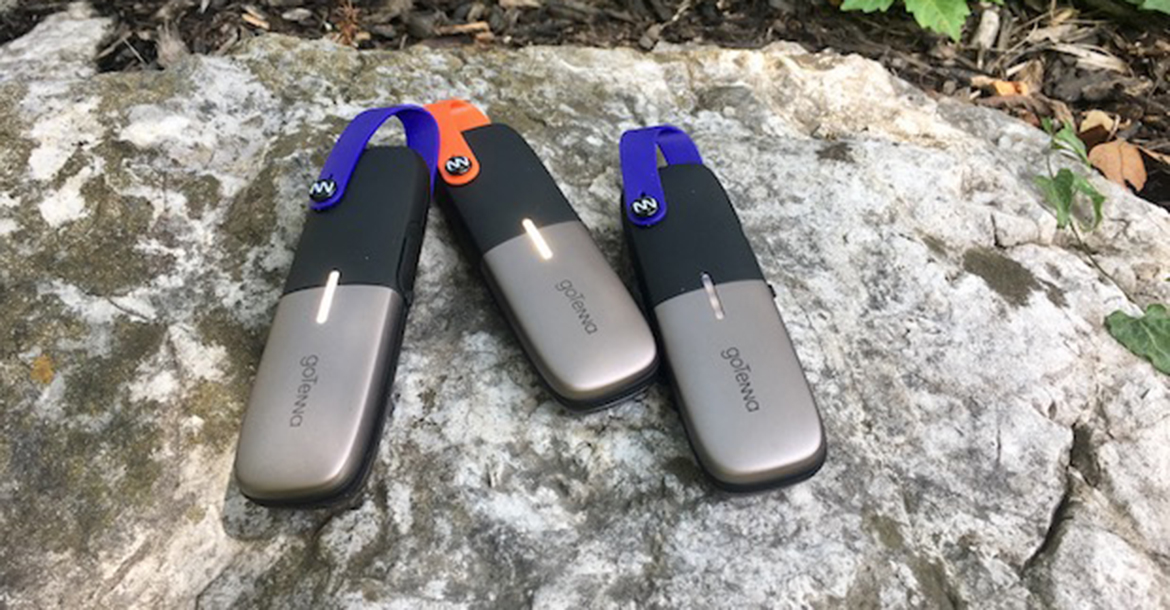 The new goTenna Mesh is available now and comes in packages of 2 ($179), 4 ($329), or 8 ($579) devices. While most of us will rarely have the need for more than two of these gadgets at a time, buying multiple units allows users to further take advantage of the meshing functionality. We’re told that in the future there is a good chance goTenna will sell individual Mesh devices, making it much easier to add relay units that can extend the network as needed.

Gear Institute readers looking to snag the goTenna Mesh for themselves can get $40 off their orders by using the promo code GEARINSTITUTE40 at goTenna.com. The offer is good through Labor Day (September 4), so if you want to take advantage of this deal you’d better hurry. 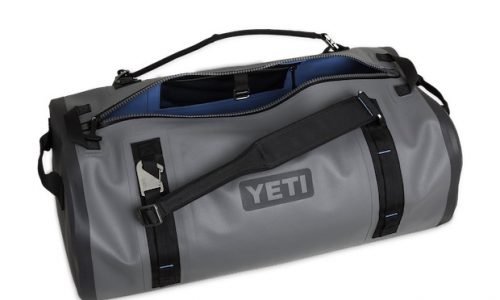