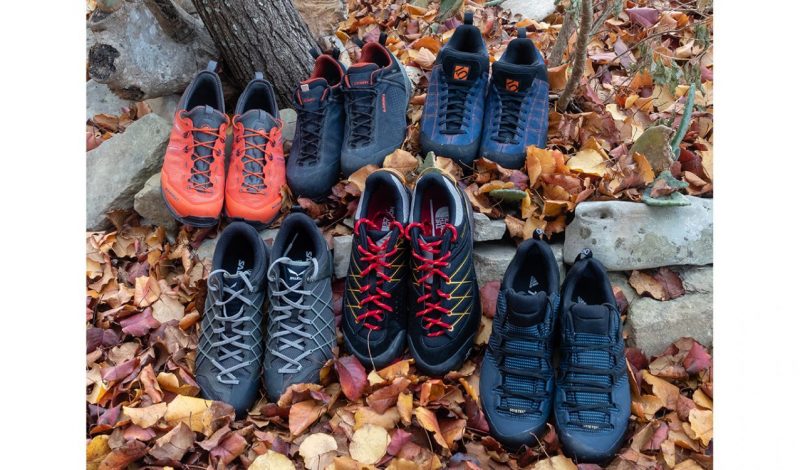 Brands specifically market approach shoes to climbers for effectively hiking to the base of routes or boulders. These narrowly focused shoes range from hikers to trail runners, with additional climber-oriented benefits like more abundant lacing, sticky rubber outsoles with solid climbing zones, and tighter fits.

I am continually testing approach shoes; the carryover models in the roundup have been staples of mine for both guiding and personal climbing for several seasons, and some of them were new to me this past summer. All of them performed the intended job well, but each had strengths, weaknesses and different characteristics that can better serve different climbers and terrain. 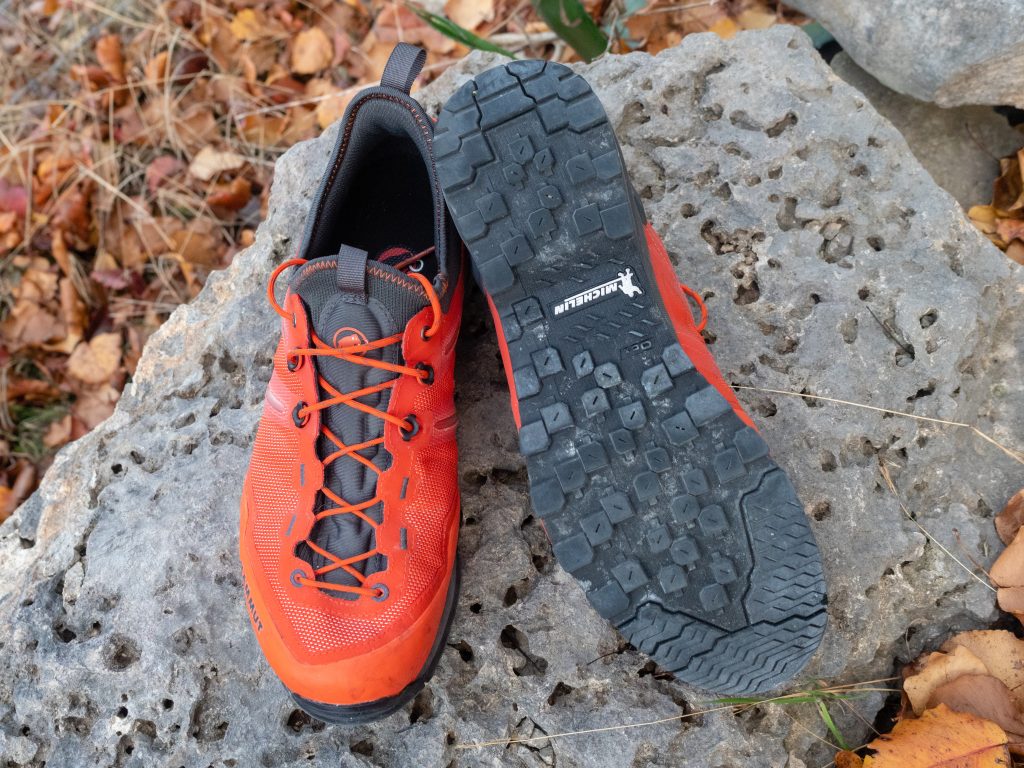 The Alnasca Knit Low had the most “trail runner feel” of the roundup group. The amount of forefoot rocker and athletic fit promoted fast hiking on approach trails, while the Michelin Rock Tech sole delivered good traction on both earth and stone. The block-shaped lugs packed with mud though, and wet stone required some attention (like all the others). The midsole was flexible in the forefoot, but also firm, providing a good mix of cushioning and sensitivity, while rendering edging acceptable. The double layer mesh upper made the Mammut Alnasca an excellent choice for warmer temperatures but scored the least defensive against impacts. Lateral stability was also the lowest of the bunch. The Alnasca Knit Low was an excellent shoe for fast approaches on moderate terrain for sport-climbing or bouldering, where loads were lighter, and quickly moving between routes or problems was essential. Our sample weighs in at 1 pound, 9.6 ounces in a men’s size 10 and MSRP is $139. us.mammut.com 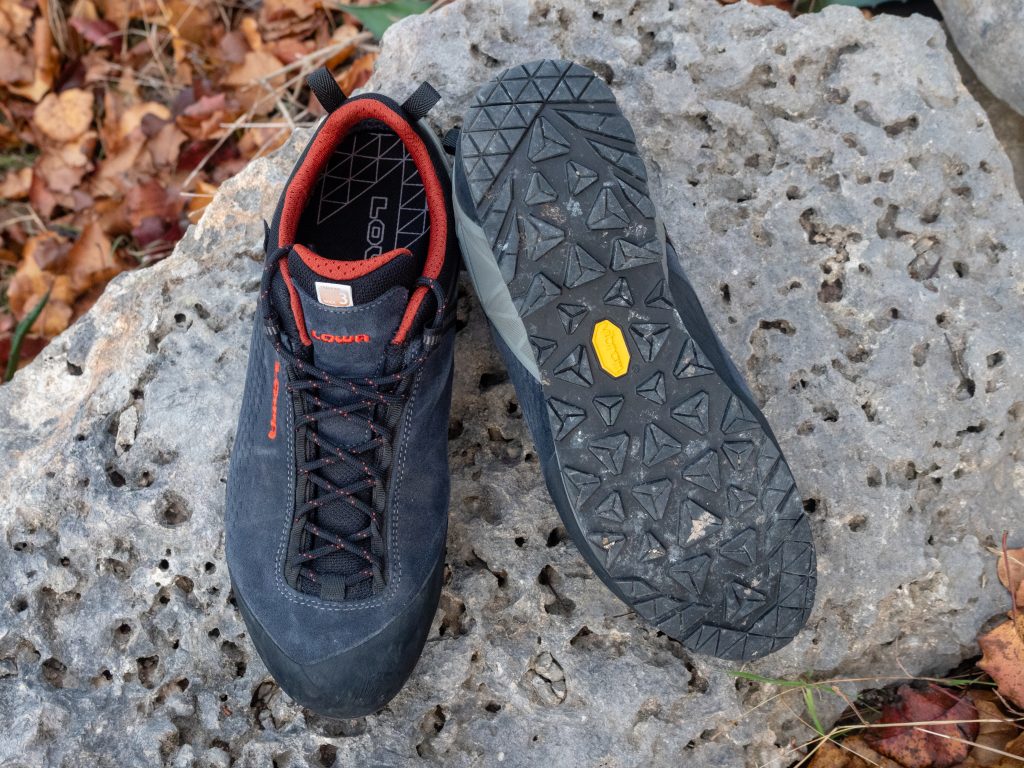 This Italian made approach shoe sports a classic look and feel. The split-grain leather upper, board lasted construction, and stiff heel counter delivered a more stable ride than most. Edging was superior, but the combination of the board lasting and stiff PU midsole lacked sensitivity when scurrying up slabs. The Vibram Rock Trac outsole did prove sticky, both on dry rock and trail, only faltering with wet conditions (which plagued all approach shoes) or polished limestone. The Gore-Tex liner made this one of the two shoes in this review well suited for precipitation, although the leather upper delayed drying and made for hot feet in warmer climes. The Lowa Ticino GTX Lo was the outright leader for protection; both heel and toe areas well protected against impacts. It also ran away with the durability award, showing nothing but dirt and dust, and promising multiple seasons of use. These attributes make the Ticino Lo GTX one of the heavier shoes in the roundup, with a verified weight of 2 pounds, 1.8 ounces for a men’s size 10, and forced the longest break-in period. MSRP $230. lowaboots.com 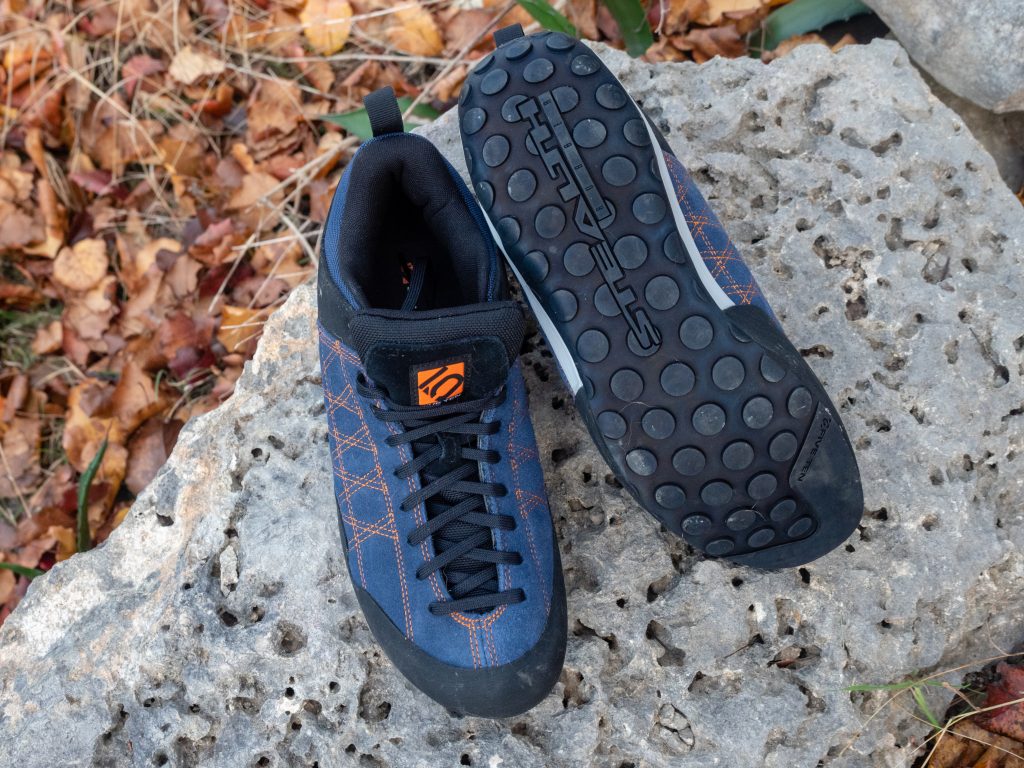 The Guide Tennie is beloved by rock guides, and for good reason; the Five Ten Stealth C4 Dotty tread outsole provided excellent traction on the rock that degraded less when encountering dampness on slabs than others. The tradeoff was the Dotty tread faltering miserably with any amount of mud. The fit of the shoe was the closest, the upper hugging the foot with abundant lacing eyelets that ran all the way to the toes. The Guide Tennie also had the plushest feel around the ankles, this area being far more padded than in the other shoes. The compression molded EVA midsole delivered the most cushioning and flexibility of the group, making long days of standing and guiding agreeable. Edging required more foot strength than the stiffer options, and the sensitivity was on the middle ground, but this tester welcomed the compromises and resultant total package. The suede and synthetic leather upper formed well to the foot over time but proved hot during summer. Our men’s size 10 test sample weighs 1 pound, 13 ounces, and MSRP is $120. fiveten.com 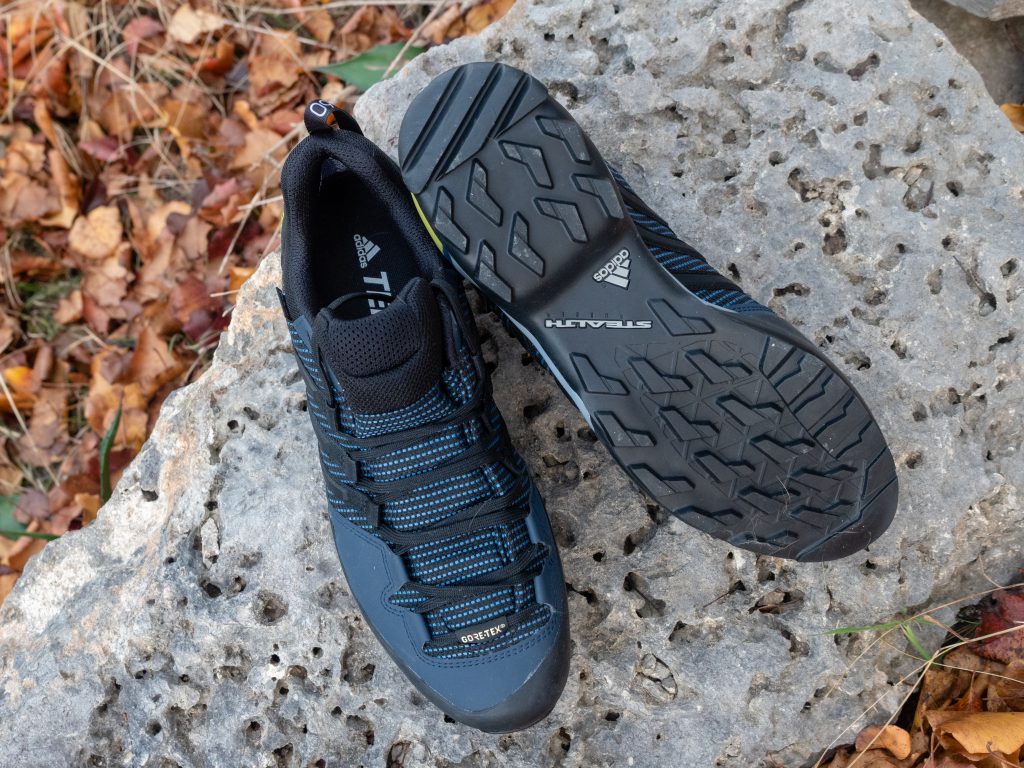 The Terrex Scope GTX had comfortable athletic shoe fit, bolstered by a stiffer chassis and the traction of a Stealth rubber outsole. These shoes struck a great balance of an athletic feel (after a long break-in), promoting fast hiking, with the stability and traction necessary for rocky scrambles. The solid outsole at the toe and the midsole stiffness edged well on more significant features, but the lack of sensitivity demanded attention on smaller features and while traversing slabs. The lug depth, pattern, and rigidity of the Stealth rubber outsole provided excellent traction on both loamy and hardpacked dirt, while still giving some feel on stone. These shoes were the top performer for this tester in snowy or rainy conditions, the Gore-Tex liner doing its job and the mesh upper drying quickly. The rubber toe cap, rigid heel counter, and synthetic overlays on the upper defended the feet well from impacts and helped the shoe’s overall durability; I have used a pair of the Terrex Scope GTX for over a year on trips to Colorado and Alaska, and they still look and function like new. The downside of the protection and durability is the weight; our test sample in men’s size 10 weighs 2 pounds, 3.5 ounces making them the heaviest in the roundup. MSRP is $165. adidasoutdoor.com 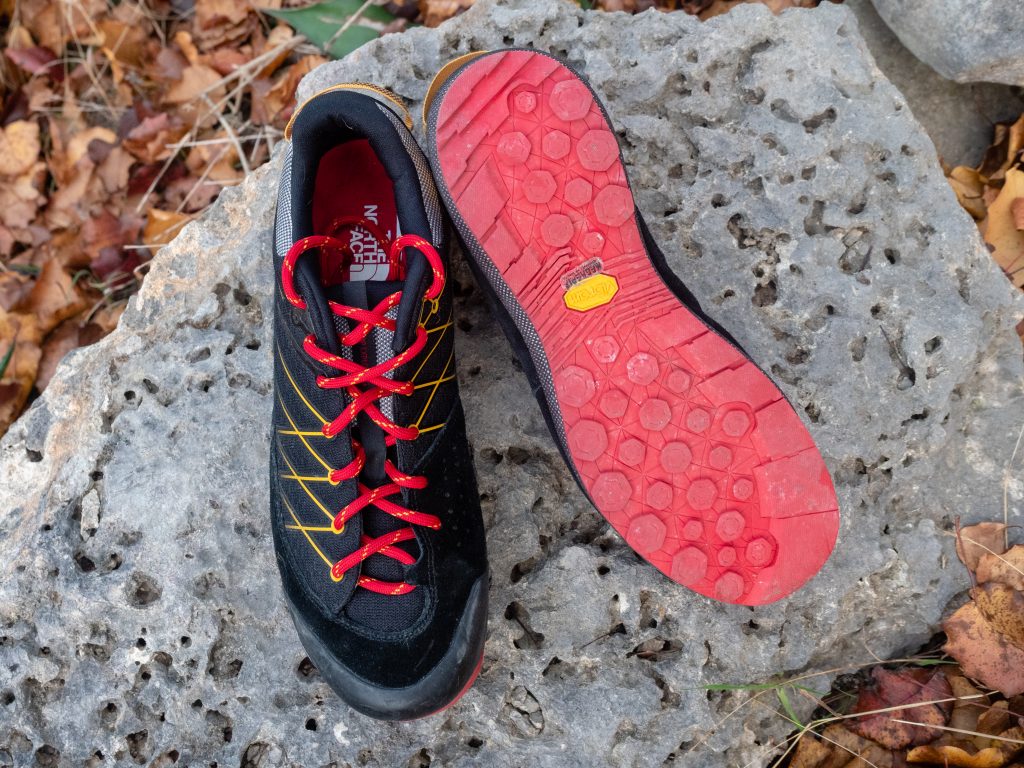 The TNF Verto III felt the most like a hiking shoe; it has a low heel drop, relatively stable and flat last, deeply seated heel, and a firm EVA midsole, all contributing to its excellent stability. The Vibram Megagrip outsole performed moderately well on all trail conditions outside of mud and gripped well on dry stone. Damp conditions degraded on-rock performance, as did it on all the other approach shoes, but to a more significant degree than on the Five Ten Guide Tennie or the Salewa Wildfire. The Verto III had the widest forefoot, making edging vague despite to-the-toe lacing, but also providing great all-day comfort, especially with feet swollen from climbing shoes. The suede and mesh upper are a smart choice; it offered some venting while also protecting abrasion prone areas.  The Verto III has the lowest cut, making it a good choice for those who experience fit problems around protruding ankle bones. The TNF Verto III was the top choice when stability was the overriding factor. Our men’s size 10 test sample hits the scale at 1 pound, 8.8 ounces, and the MSRP is $120. thenorthface.com 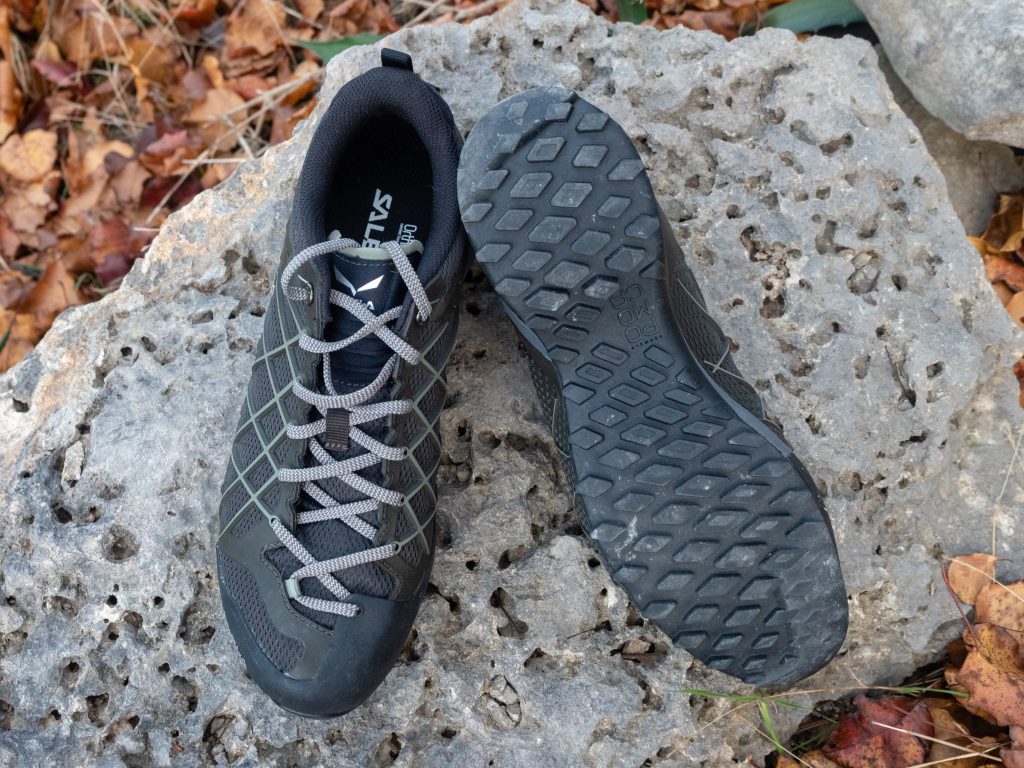 The Salewa Wildfire’s combination of attributes brought the most confidence when the approach was a question mark, and motivation to obtain the climbing objective was high. The Wildfire has a close, athletic fit, and a thin midsole under the forefoot, making sensitivity excellent at the cost of cushioning and comfort over a long day of slab pounding. The to-the-toe lacing added to the overall sensitivity while aiding edging and stability. The POMOCA butylic compound rubber outsole provided the best traction of the group on the trail, and only gave up the tiniest of margins to the Guide Tennie’s Stealth C4 rubber on stone. The Wildfire also scored at the top along with the Guide Tennie for performance on wet rock, but the closely spaced diamond-shaped lugs packed quickly with mud. The mesh upper proved the most breathable of the group, delegating the shoe to milder conditions, and the injection molded exoskeleton, stiff heel counter, and rubber toe cap guarded moderately well against impacts. The Salewa Wildfire’s mix of qualities was indeed a potent combination. Our men’s size 10 sample weighs in at 1 pound, 12.7 ounces and carries an MSRP of $130. salewa.com 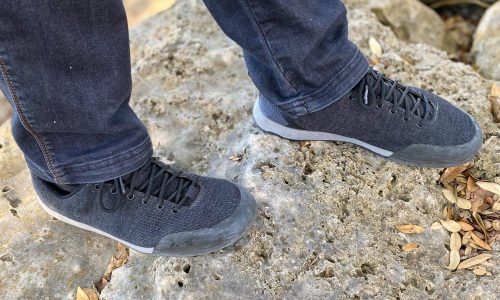 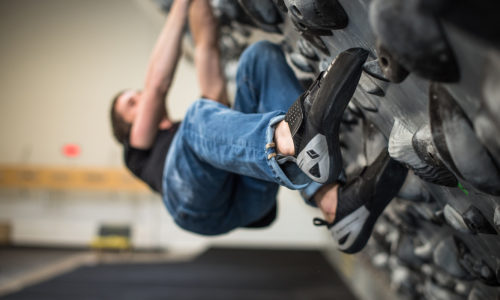 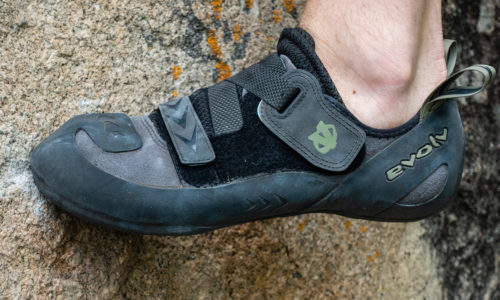 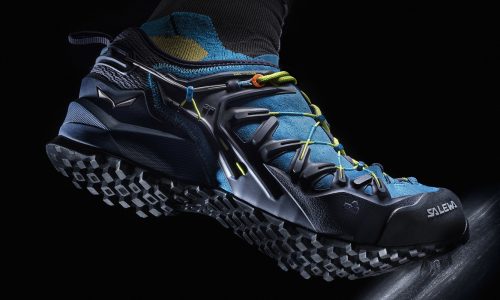 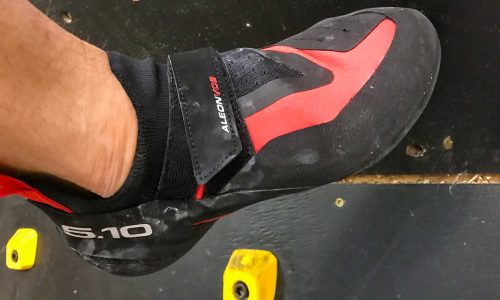 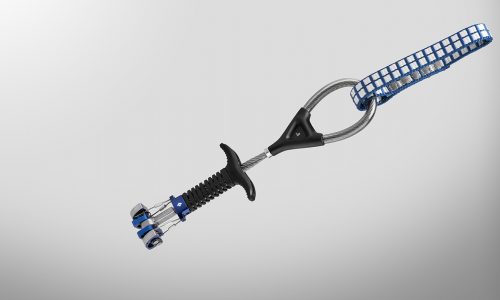