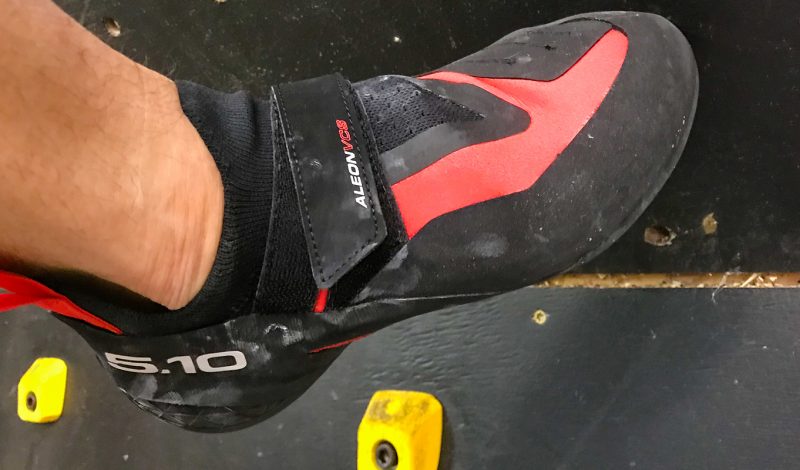 Nicole enjoying the fruits of his labor

Legendary boulderer and longtime cobbler, Fred Nicole, helps Five Ten knock it out of the park with the Aleon

Fred Nicole is a name that has floated around high-end bouldering for decades. The reserved Swiss boulderer garnered a mythical status in the ’90s, visiting established bouldering areas and quickly dispatching the hardest problems with a slow and undeniably strong style and establishing test pieces that became classics.

What many didn’t know was Nicole’s penchant for shoe design; a Swiss cobbler, Nicole has delved into the nuances of rock shoes for as long as he’s been climbing, with the same methodological approach. He even brought Five Ten shoe his handmade lasts, with one becoming the new Five Ten Aleon, released this spring with an MSRP of $190.

We tested the Aleon gym climbing and limestone sport climbing for two weeks for this First Look.

Nicole and Five Ten worked on the Aleon for two years, and this shoe is the first born of the partnership to hit the market. Along with a handful of other recently released shoes, it’s amongst the first to be co-branded with adidas.

The Aleon’s most visibly noticeable feature is the pointy toe, much pointier than past Five Ten offerings aimed at sport climbing and bouldering. The sole under the toes has a noticeable concave shape. The Aleon is not as soft or downturned as might be assumed for an “aggressive” shoe, with a medium stiff midsole and moderate downturn.

The Aleon sports a rand that splits at the outside of the arch, with the inside rand extending to cover most of the toe box upper. The narrow heel has textured, thinner rubber covering the gaps in the rand as it wraps moderately high up the back of the shoe. A single Velcro strap and Primeknit, a breathable and smooth elastic fabric, provide a high closure to keep dirt out.

The split sole boasts Five Ten’s proven Stealth C4 rubber and the upper is all microfiber. 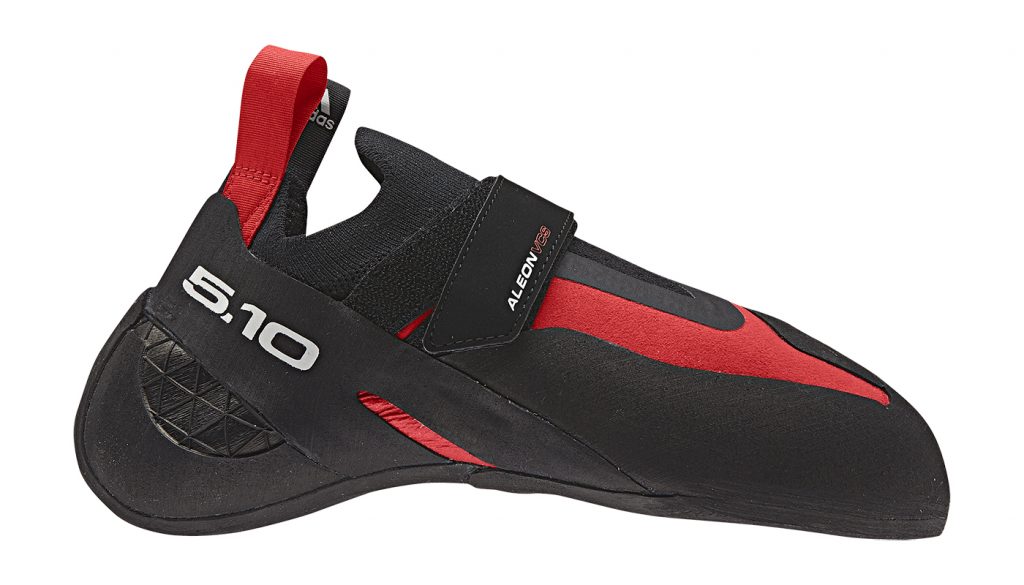 I have a classic “duck foot;” a narrow heel with a wide but thin forefoot. I wear a size ten running shoe, and the size ten Aleon (verified 1 pound, 0.9 ounces per pair) fit me extremely well out of the box. The microfiber upper, which feels thicker than most, has a pleasantly soft interior, and the four-way stretch Primeknit closure, although riding high, didn’t make getting into the shoes difficult. The knit closure is very secure without any pressure points, making the Velcro closure just a backup to me.

The arch feels higher than other Five Ten sport climbing or bouldering shoes in my quiver, without the need of the strap tension to keep it in contact with my foot. The toe box also feels wider than my other Five Tens, which felt great for my wide forefoot. It is common for uppers to be a bit baggy on my thin foot, but the Aleon wasn’t. I could easily feel the concave shape of the toe box platform.

The Aleon has a close fit and my toes felt glued into a powerful position without high rand tension or aggressive downturn like many shoes marketed toward the high-end climber. The heel on the Aleon didn’t have gaps in the fit, a common problem for me in Five Ten shoes.

All these attributes made the Five Ten Aleon one of the most comfortable and well-fitting sport climbing and bouldering shoes for my foot shape in recent memory.

The first two indoor training sessions in the Aleons proved Nicole’s input was productive. Pulling in on steep woodies, stabbing pockets, and putting high pressure on small edges all revealed the effectiveness of the concave and pointy toe and the midsole stiffener. The shoes quickly molded to my foot, making the already comfortable fit even more so. I didn’t take the shoes off once during my second 45-minute stint.

Out on limestone, the shoes continued to impress, with the performance indoors transferring to sport routes and boulders outdoors in a large zone of steepness. Starting from about 15 degrees overhanging up to 45 degrees overhanging seemed like the Aleon’s sweet spot; the moderate downturn, concave and pointy toe, and semi-stiff platform working in this popular range for sport climbing and bouldering in the mid to higher grades. For more vertical terrain or routes and problems nearing horizontal, a stiffer or softer shoe with less or more downturn could be more effective.

The Stealth C4 rubber had class-leading adhesion to both plastic and limestone, as expected from past testing of shoes using the same rubber compound. Both heel hooking and toe hooking felt secure and sensitive; the heel hooking felt better than any other Five Ten shoe I have tried.

Fred Nicole’s experience in both climbing and shoe design has helped Five Ten create a great weapon for sport climbing and bouldering. The physical characteristics of the Aleon bode well for climbers with wider forefoots, higher arches, and small heels heading to mid-high and high-grade objectives. And for a performance oriented shoe, they are remarkably comfortable.