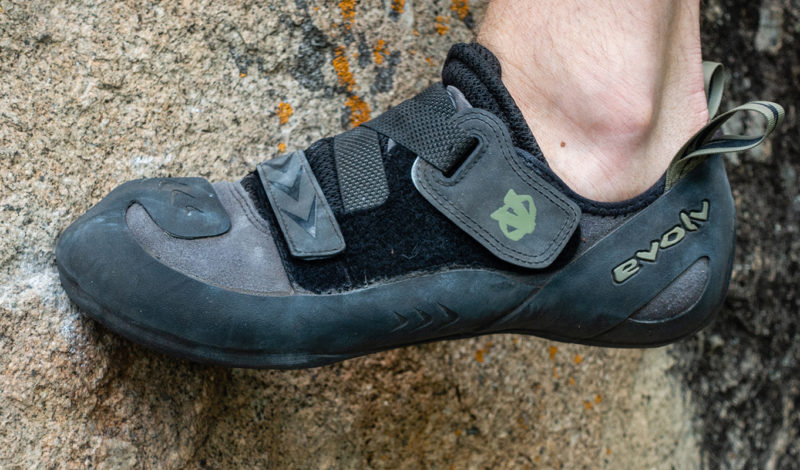 Evolv has consistently and steadily expanded and improved its rock shoe offerings since the brand launched in 2003. Evolv updates models regularly, and the newest version of the Kronos, released in January, continues the trend. We’ve been testing a pair for a month, training on plastic at home, clipping bolts on limestone in central Texas, and plugging gear and bouldering on granite in Colorado. 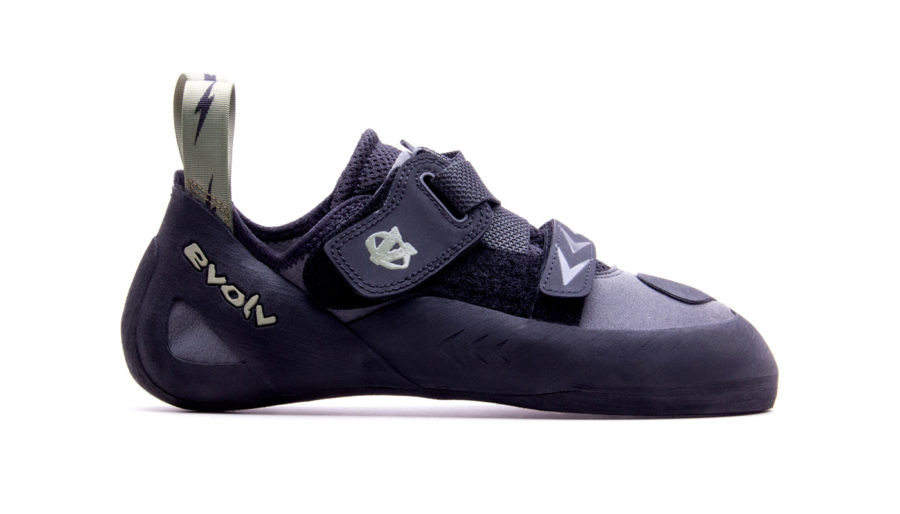 Evolv goes full synthetic on the Kronos with their vegan-friendly Synthratek VX upper and leaves it unlined. Evolv employs its proprietary Trax SAS rubber (4.2mm) for the outsole and a molded, variable thickness rand.

The Kronos is ever so slightly downturned and asymmetric and uses a 1.2-mm thick full-length midsole.

Evolv employs a split tongue design in the Kronos and a double Velcro strap closure system. The top strap is doubled over, terminating at two points on the upper, with the closure tab floating in the middle. The upper end of this strap is adjustable. Double webbing loops reside on the heel.

The standout attribute of the Kronos was the all-around comfort. The split tongue and double heel loops made donning super easy; no wiggling and pointing the foot through a constricted opening with a tight tongue.  The fit felt super relaxed but still taut, and the synthetic upper was pleasant on the skin. The slight downturn was not apparent during wear.

The closure system was excellent. The upper looped strap provided not only provided ample adjustment for foot volume, the wide Velcro patch and the single closure tab design allowed precise adjustment of the strap angle to suit the shape of the foot and preferred tension pattern.

I have the classic “duck foot” – narrow heel, wide forefoot, but thin top to bottom. The Kronos fit my heel well and the rearfoot rand tension was low. My forefoot did overhang the outsole at the little toe, but it didn’t affect comfort. The arch of the shoe felt flat and I had to crank down fairly hard on the upper closure tab to feel connected to that portion of the shoe.

The Evolv Kronos in Use

I use high-performance sport climbing and bouldering shoes most of the time. The Kronos’ relatively flat and straight profile and the high level of comfort lead me to believe that the shoes wouldn’t perform well for intermediate to advanced technical routes or boulders. But the Kronos was surprising.

My first experience was on my Moonboard; I didn’t expect much on the indoor training testpiece, but the Kronos held its own. Although the structural downturn felt non-existent under load, the shoe was pliable enough to coerce into pulling on holds, and the sensitivity was workable. More aggressively shaped and softer, more sensitive options would have eased my efforts, but I did almost all the moves attempted. And I didn’t feel the need to pull the shoes off after every burn. The Trax SAS rubber didn’t adhere as well to the sloped starter footholds compared to Vibram SX Grip 2 or Stealth C4.

Limestone sport cragging produced similar results. The Kronos allowed me to rack mileage on grades just below my limits on slightly overhanging routes, without the urge to immediately peel them off as soon as I was down. Steeper routes demanded a more specialized shoe, but the Kronos was impressive for having great comfort. I could have stood around and belayed in the shoes; the only thing making me take them off was the heat. It’s admittedly hot in Texas during the summers, but the synthetic upper didn’t breathe well for being relatively thin.

The Colorado granite let the Kronos shine. No screaming toes on long trad pitches and jamming on vertical routes felt as comfortable as jamming can be to a sport climber. The granite boulders tended to be vertical and just beyond, and the Kronos didn’t suffer as badly as it did on steeper, slippery limestone.  The Trax SAS rubber performed as well as others on granite, both on moderate trad and boulder problems.

The Evolv Kronos walked a middle ground. The extreme comfort of a beginner shoe, but at home on intermediate terrain. A great choice for multi-pitch trad, but the ability to attack sport routes and boulders. There are specialized weapons that make advanced crux moves easier, but the Kronos can do many of them in a pinch. An example; a climbing friend forgot his shoes on the trip to Colorado, and sent his first V7 in the Kronos. The crux was on a steep face that required pulling in on small features, and the Kronos answered the call.

Evolv categorizes the Kronos as “technical all-around,” which is accurate. If the upcoming climbing could encompass all forms of rock climbing, and the terrain and difficulty were unknown, the Kronos would be a serious contender as the only shoe to pack.