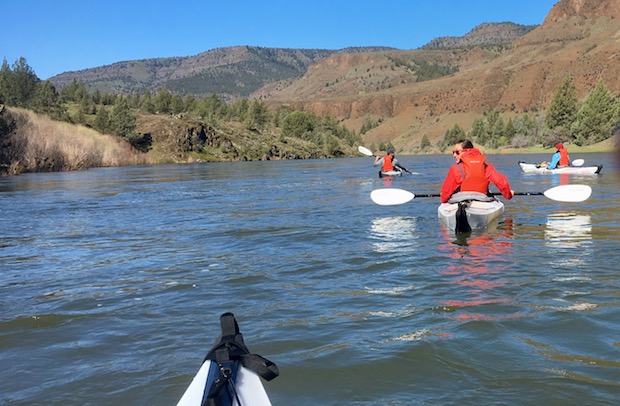 Back in 2012, Oru Kayaks burst onto the outdoor scene with the launch of a Kickstarter campaign to crowdfund an intriguing new folding kayak that drew its inspiration from Japanese origami. The boat was reportedly easy to set-up, offered solid performance out on the water, and could be easily stored in the trunk of a car. It was unlike anything that had come before it, and supporters pledged more than $440,000 to help make the initial concept a reality.

Fast-forward five years and Oru has grown into a successful company that now offers several variations of its original design, including the Beach LT for day trips, the Bay ST for fishing and backcountry excursions, and the Coast XT for longer, more demanding expeditions (as tested in our Everglades paddle trip). Over that period, the initial design has evolved some to help make the kayaks more durable, easier to assemble, and perform better on the water. But the initial concept of a lightweight, folding boat that you can take with you anywhere remains the same. 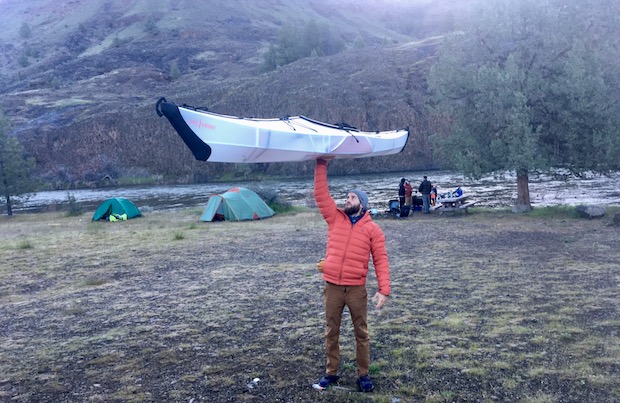 Recently, we had the opportunity to travel to Oregon to spend a few days out on the John Day River to see how well these kayaks perform in current. Oru has often touted its products as having the portability of an inflatable and the performance of a hardshell, so we were eager to see if that held true. A three-day float would provide extensive insights into just what they kayaks were capable of, especially since the John Day was running fast and wild following spring rains and winter melt off.

The Bay ST was the kayak of choice for our river journey. The 12′ boat weighs just 28 pounds and features 90 liters of storage, along with adjustable foot and backrests, a skirt-ready cockpit, and on-deck rigging. For 2017, it has been updated to be more comfortable over extended trips, and has seen some subtle tweaks to make it easier to assemble. The kayak can hold a maximum of 300 pounds and is said to be more agile than earlier editions as well. 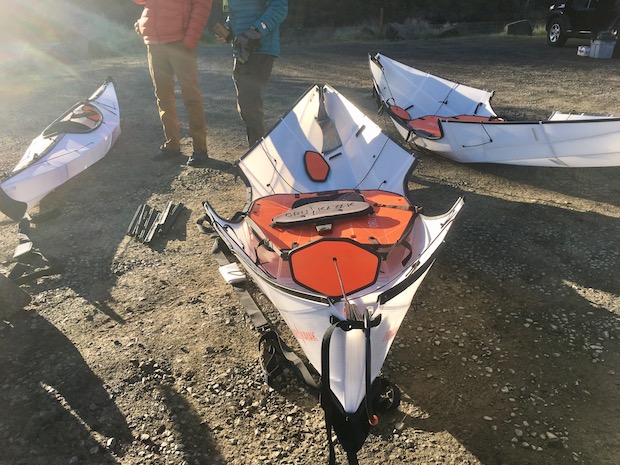 Oru claims that it takes less than five minutes to set up the kayak, but that isn’t necessarily true for a beginner doing so for the very first time. While assembling the boat isn’t particularly challenging, there are a few nuances that you’ll pick up after you’ve done it a time or two that make the process faster and easier on subsequent efforts. The plastic hull folds of the boat  loosen up with use making it easier over time. Our initial set-up was also hampered somewhat by the fact that we would be paddling and camping for several days, which meant packing quite a bit of gear into the Bay ST’s storage areas. This made it a little more difficult to seal up the kayaks, but after 15 or 20 minutes, we were pretty much ready to go.

Even loaded with our gear, the boats were fairly easy to transfer to the put-in, and before we knew it we were launching out into the fast-flowing river. The water was zipping along at a quick pace, and while the rapids we encountered were probably never more than Class II or III at their largest, it didn’t take long for me to start to feel a bit unstable in the boat, It rocked precariously on a number of occasions, and I shifted and paddled to try to adjust, but for some reason I had a difficult time adapting to the motion of the kayak, and before long I found myself taking a swim. Thankfully, the Bay ST is easy to exit from, even with a spray skirt in place. I ended up getting lots of practice doing just that over the course of the next few hours, as I managed to tip the boat on several occasions. The swift waters of the John Day weren’t doing me any favors, but for some reason I struggled to maintain control of my kayak, even as my companions managed to navigate the same waters with more precision than I’d been able to demonstrate.

Now, I’m hardly an expert paddler, although I have spent more than my fair share of time in a kayak over the years. In the past, I’ve always been able to maintain a good level of control over a boat, whether paddling on rivers, lakes, or oceans. In fact, I’ve rarely ever rolled my kayak on previous outings, so it was a bit perplexing as to why I struggled to keep Oru’s model upright. 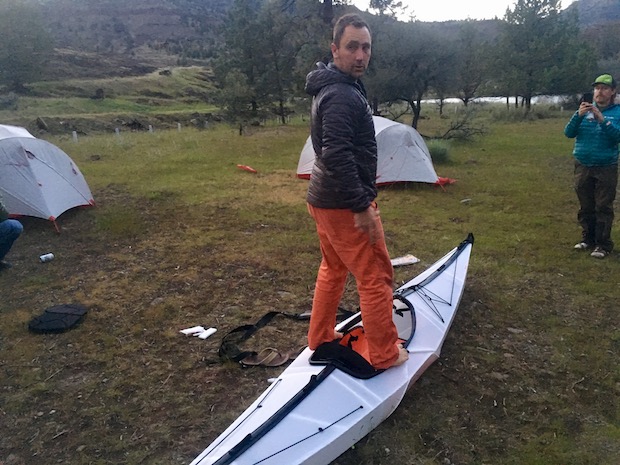 The company’s technical specifications for the Bay ST state that the maximum supported height for a paddler is 6’3″, which meant I was pushing right up against that limit. This may have contributed to my issues, which started when I first slid into the cockpit and struggled a bit to get comfortable inside the boat. I tried adjusting the footrests, but my legs never quite found their happy place, and as a result I had a hard time feeling at ease.

Due to their unique design, the Oru kayaks perform a bit differently on moving water as well. For instance, they tend to skip along on top of the surface more than other kayaks, which sit a tad lower. The angular design of the Bay ST gives it a different feel as well, allowing the boat to turn surprisingly quickly at times, while making it more challenging to judge just how off balance it is in fast-moving water. All of this, combined with the fact that the boat was loaded with gear, probably helped contribute to my wet day on the river. 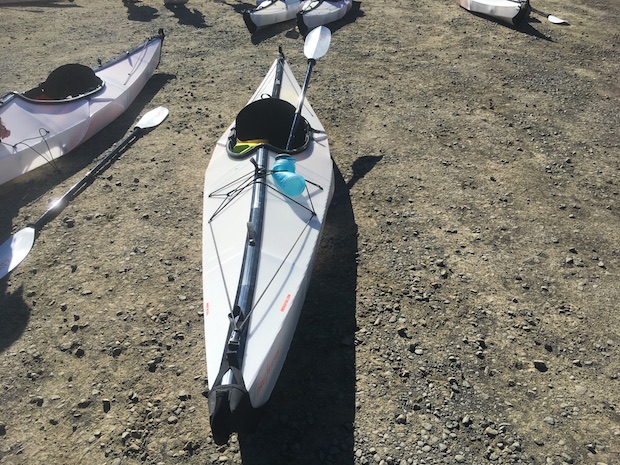 All of that said, my fellow paddlers managed to find their groove with the Bay ST much more quickly and had few problems making their way down river. Over the course of the couple of days that we were out on the water, some of them managed to dump their boats too, but for the most part they remained comfortable in the cockpit and more adept at staying upright, even when things got dicey.

Despite the challenges I faced with Oru’s Bay ST, I still found it to be a fun, agile boat to paddle around in. On flat water, I’m sure I would have fallen in love with it, and probably would have gotten the chance to become more accustomed to its handling. It’s fold-up design is still a work of genius, and I find it amazing that it can be stored in just a 33’x12’x29″ space. That makes it ideal for apartment dwellers or someone who simply wants a boat that is easy transport to and from the water. 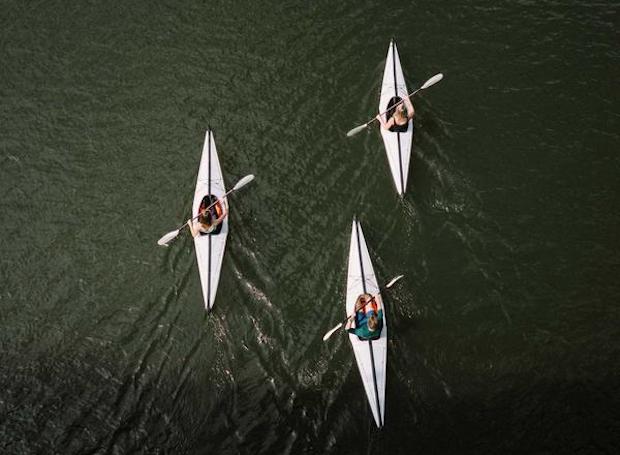 Taller paddlers should be aware of how cramped I felt in the cockpit however, and keep that in mind when considering this kayak. Oru’s other offerings provide room for someone who is up to 6’6″ in height, possibly making them a better choice all around. I’m sure those few extra inches of space would have gone a long way towards making me feel more comfortable.

Priced at $1599, the Bay ST is not a small investment. In fact, there are plenty of standard hardshell kayaks on the market that cost less than that. But Oru isn’t really courting the standard kayak buyer with its boats. Instead, it is looking for paddlers who wants ease of transport and storage, but are still looking for solid performance as well. If you fit that description, than Oru has delivered a compelling product that you’ll certainly want to take a look at. I’d recommend taking one for a test drive first however, as that will help ensure that it meets your expectations in all areas before dropping your hard-earned money on one.

Find out more at orukayaks.com.