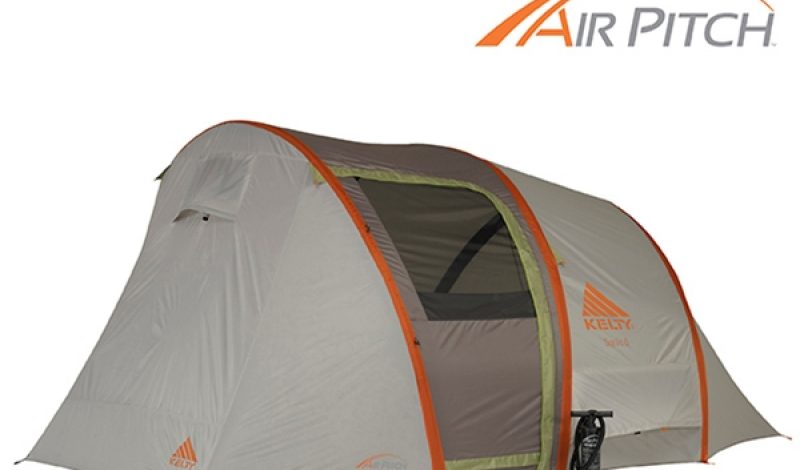 For hardcore backpackers who’ve trained themselves to fit all the essentials into one pack, car camping is a shameless indulgence in gear excess. All the edicts that have defined one’s pack-light philosophy (keep it light, keep it small, make sure it has multiple applications, and bring just one pair of underwear) is replaced with a kitchen-sink mentality that’s liberating—and daunting, once you realize the sheer quantity of products on the market.

To help navigate the infinite number of options, here are a few must-have picks ideal for a luxe car-camping experience. I used them on several outings this spring, culminating in establishing a base camp for Ragnar Trail Appalachians, a 24-hour trail run relay race in West Virginia’s Big Bear Lake. Our eight-person team hunkered down in a sodden field for two days, braving the wet, windy remnants of a tropical storm, each of us running 16 miles divided into three loops. To put it simply, running more than six miles at four in the morning makes you keenly aware of what makes a truly luxe base camp. 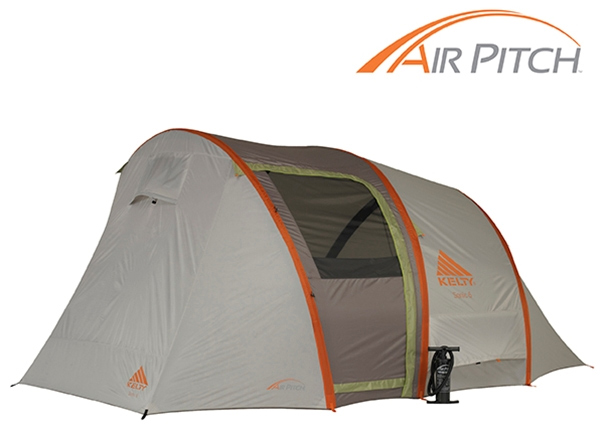 Kelty Sonic 6 Tent ($299.95)
Pitch-time means EVERYTHING when arrive at your campsite at 2 a.m. under a steady rain. Kelty’s “AirPitch” technology may be the fastest solution on the market. Rather than employing a mess of collapsible poles, the Sonic 6 has two six-inch-diameter tubes that inflate with included dual-action air pump. Simply stake out the tent, attach the tube to the internal ports that flank either side of the door, and start pumping. The baffles inflate in about two minutes and are incredibly sturdy. Then, re-stake the tent to assure rigidity, and you’re done. Taking the tent down is even simpler: just release the air from the large valves and it deflates in seconds. The 68D poly single-wall tent has taped floor seams, high and low vents, guyout points, a wide C-shaped door. We did wish the tent had a rain fly to protect our soaked, mud-layered trail runners. Also, a bigger seam across the top of the door would’ve kept water from running into the tent when we opened the door. Otherwise, the tent performed perfectly. The interior is downright massive—ten feet long, nine feet wide, and six feet tall. More than enough space for up to seven sleeping, resting, clothes-changing dirty, wet runners. 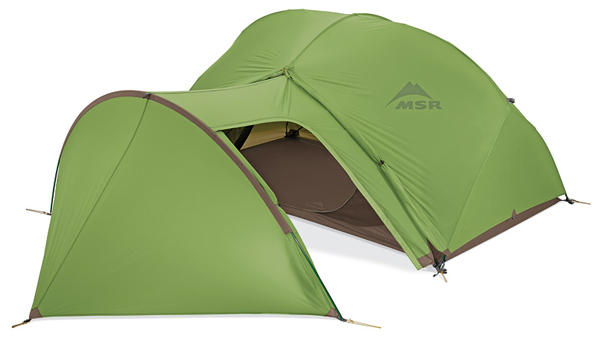 We complimented the mansion of the Kelty Sonic 6 with this svelte, two-person free-standing backpacking tent, which became a private environment for an exhausted runner to crash out in relative privacy. The cross-shaped pole configuration offers 40 inches of head space—one of the roomiest backcountry tents I’ve tested. It weighs in at a feature 4 pounds, 3 ounces, sets up quickly, and breathes well—and the rainfly kept the interior bone dry. The real win was the addition of the Hubba Gear Shed, which clips onto the tent frame and marries with the tent’s rain fly to create an additional 25 square feet of cavernous storage accessed via an extra-large zipper door. This sheltered our mud- and rain-soaked shoes and clothing throughout the duration of the race. The back entry to the tent, meanwhile, allowed exhausted runners to bed down without having to crawl through the gear-choked front. 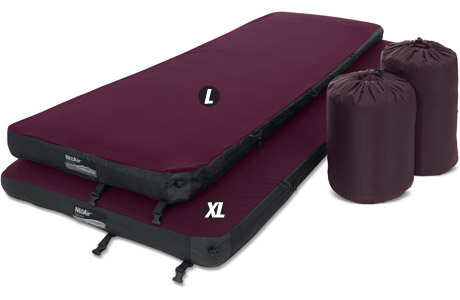 Therm-a-Rest NeoAir Dream Sleeping Pad ($199.95)
Sleep came in hours-long pockets throughout the race, and lying down on the NeoAir Dream was like reclining on a cloud. This luxe, contour-hugging mattress has an open-cell foam pillow top with a buttery-soft fleece cover, which is paired with Therm-a-Rest’s NeoAir inflatable mattress for a downy four inches of comfort. The pad inflates in about five minutes, with triangular baffles to prevent off-balance shifting while sleeping, and a heat-reflective “space blanket” silver lining that bounces back your body heat. The stuff sack doubles as a pump to inflate the mattress, and the cover is machine-washable, which is a definite bonus after 16 miles of muddy trails. 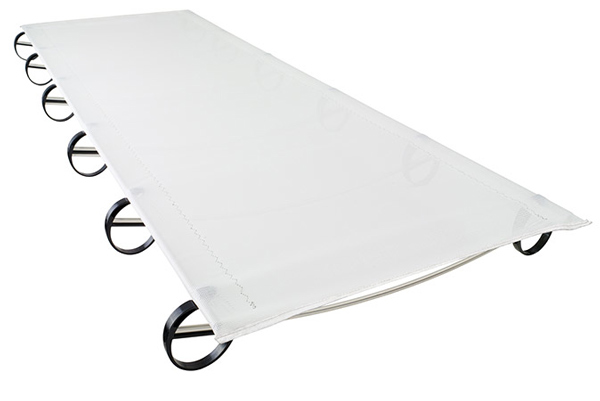 Yes, it was probably overkill, since the NeoAir Dream was so damn plush. But we had space in the trunk, so the LuxuryLite Mesh Cot came along—and the combinations made lying down sheer nirvana. The ingeniously designed cot uses collapsible poles to create a 4.5-inch-high, 26-inch-wide breathable platform. Twin poles flank either side of the mesh cot, while a series of poles connect to the plastic feet that anchor to the long poles, creating the tension that provides spring-like comfort without the squeak or biting cross-bars of other cots. Better still, unlike most cots, it breaks down into a 16-by 6-inch pack to help you save precious trunk space. 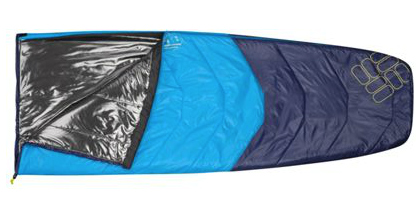 Columbia Radiator 40 Sleeping Bag ($99)
I tried several car camp-friendly sleeping bags leading up to the race, but found them to be overly cumbersome. So I opted for the summer-weight Radiator backcountry sleeping bag. The semi-rectangular shape let me toss and turn without feeling trapped, a clutch detail when your legs start to cramp up after your second loop. The bag boasts Columbia’s toasty Thermic MX insulation for warmth that’s rated to 40 degrees (I was perfectly comfortable when pre-dawn temps dropped into the low 50s). It also employs their proprietary Omni-Heat technology, which uses small dots of silver material that reflects your body heat, while the breathable fabric between the dots kept it from getting too toasty.

Snow Peak Ajikataya Hatchet ($140, 180mm)
At first blush, this was arguably the least-essential item on this list. But hey, campers like axes. And much to my joy, I was swinging this aesthetically stunning hatchet less than 15 minutes after I arrived at our base camp—unfortunately positioned in a sodden parking lot 200 yards from the starting line. We’d decided to stretch a plastic tarp across two SUVs to keep us dry from the steadily-falling rain, and I took to the nearby woods to find fallen logs, which I chopped to hoist the tarp into a rough teepee. The hatchet’s stainless-steel blade made rapid work of the wood, cutting through four-inch-diameter logs in a few, well-aimed swings. The broad, seven-inch-long blade also easily cut away the wet wood from the wet logs we collected the last night when fires were permitted.

Kelty Folding Cooler ($55.95, medium)
Living in an apartment has forced me to keep my gear obsession in check, and thus owning a cooler has been a pipe dream…until now. The soft-walled, semi-rigid cooler holds 27 liters, enough space to keep our post-event beers on ice for more than a day—and the molded, recessed drink holders on top made it a great go-to side table throughout the race. Then, after draining the cooler, its Velcro-anchored side walls collapsed and zipped down to a fraction of its full size (down to a modest 5.5 inches), which let it conveniently slide it in the trunk, and under my bed when I got home.

Alite Designs Mantis ($120) and Monarch ($70) Chairs
Long-ass runs make simple things like sitting down an absolute necessity. And the chairs from SF-based Alite Designs may be the most comfortable and innovative of all camp-friendly chairs. They use tent-pole technology to create a durable, 7,000-series aluminum frame with a ripstop nylon seat that slips onto the four points in the frame, offering full back support with breathable mesh panels on the sides. Better still, unlike most chairs on the market, they break down and pack into a small stuff sack, making them easily portable and at home in any outdoor scenario, from beach to concert to base camp. The four-legged Mantis weigh in at only 1.6 pounds, while the lighter Monarch only has two legs—what the chair designer refers to as the six-pack chair; you rely on your own legs to achieve balance, and after six beers (or after running 16 miles), getting out can become a fun challenge. The legs can also slightly sink into wet earth. Happily, any incidents result in merely a playful tumble onto the ground. 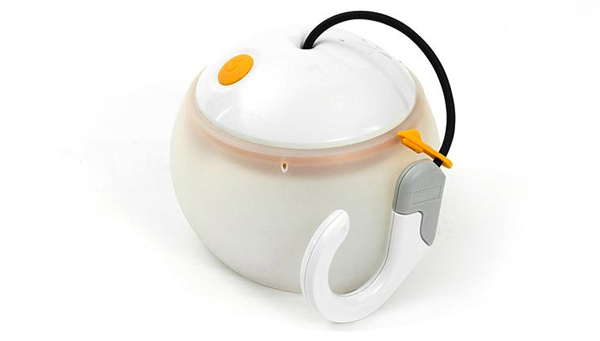 Snow Peak Hozuki Lantern ($89.95)
On aesthetics alone this lantern beats out all comers. Modeled after the traditional Chinese paper lanterns (which took its design lead from the Hozuki plant), this light source boasts LED illumination of up to 100 lumens in three brightness settings, easily adjusted by the lantern’s single button. The Hozuki also has an atmospheric “candle” mode—low-level light that flickers like a flame to changes in sound or wind. It uses four AA batteries which lasted eight hours on the highest setting. This light kept us sane throughout the night as we huddled under the tarp, from bright bursts of illumination for quick coffee fixes to mellow, low light for those long hours before dawn. We also hung the lantern’s little brother—the Mini Hozuki ($39.95)—inside the Sonic 6 to let people change in the perfectly bright 60 lumens. 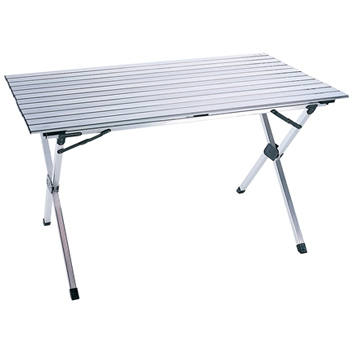 Slumberjack Silver Stowaway Camp Table ($119.95)
Our makeshift tarp shelter kept us dry, but this collapsing, all-aluminum Stowaway Camp Table made us feel at home. Assembly was a breeze: just fold out the twin legs, attach three supports across its width, and then unfurl the planked surface and slip it onto the frame. The table hosted everything—water bottles, stoves, food, head lamps—and is rated to hold up to 100 pounds. The 47-inch by 27-inch aluminum surface was a breeze to wipe down, and the table can be stored in a sleeved pack that weighs only 17 pounds and took up a modest amount of space in the trunk. Easily the most coveted item in our base camp by the other race teams who were forced to balance their goods on wet coolers.

Jetboil Flash Stove ($99.95)
Save for the final night, when we awarded our efforts by grilling flank steak for Thai beef salad, most of our mid-race meals fuel required just hot water. The simplicity of the Jetboil Flash made this a breeze. Fill the top vessel with up to one liter of water, screw on the canister, turn on the gas, and trigger the spark by pressing a button. In two minutes the water was ready, as indicated by the color-changing “heat indicator”— a flame-shaped graphic on the side. The included tripod adds stability, and the whole kit collapses into itself. 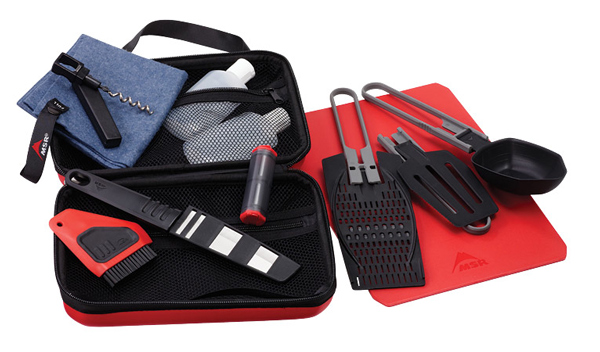 MSR Alpine Deluxe Kitchen Set ($54.95)
The Alpine Deluxe Kitchen Set includes pretty much everything you need to make a gourmet camp feast: a sharp knife (used to cut the steak for the Thai beef salad), a fold-out hard plastic cutting board (used for everything from cutting the steak to making PB & J’s), a scrubber, all sorts of small plastic cases and squeeze bottles for oils and spices, and folding plastic utensils, including a strainer/grater, spoon, spatula (perfect for prepping some jasmine rice). The included pack towel and scraper made cleaning a breeze, and the zippered compartments kept the dirty isolated from the clean.