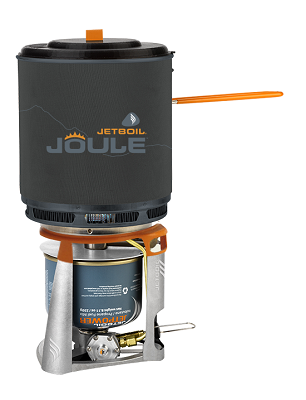 At first blush, the Jetboil Joule just looks like a super-sized version of the brand’s self-contained stoves. Which is true; the new 28-ounce pot will let you prep meals for up to four people, and boil a liter of water in under three minutes, with constant heat output down to 10 degrees. But, unlike most hardcore stoves, the 10,000 BTUs can also be dialed back to let you simmer—not scar—your ingredients. The canister is also inverted, which—when paired with a liquid feed regulator—allows it to perform like a liquid-fuel stove minus the hassle of more complicated assembly and priming.
—Nathan Borchelt