Held every fall in Las Vegas, Interbike is far more than a trade show—it’s a gathering of the cycle tribe. Consider that the show tried to move to Southern California a few years back and the industry would have none of it, keeping it in Vegas where manufacturers can show off their new wares while still participating in a little sin (just the recipe for cyclists),

The big highlight of the show is not under the artificial lights of a trade show hall, but on the two days leading up to the indoor show when attendees hop a shuttle bus to nearby Boulder City, Nevada, and ride brand new bikes at Bootleg Canyon, where the local mountain bike groups have set up an impressive trail system reminiscent of the famed desert singletrack at Fruita and Grand Junction, Colorado (see video). The demo is such a big part of the show that it is the only event that some major manufacturers such as Giant and Trek attend.

The actual show broke attendance records and featured two floors of exhibitors. What that says is that there is a ton of energy in the bike industry as more and more disciplines and technology emerge for everyone from bike commuters to racers to Tour de France-ophiles. Here are some of the highlights: 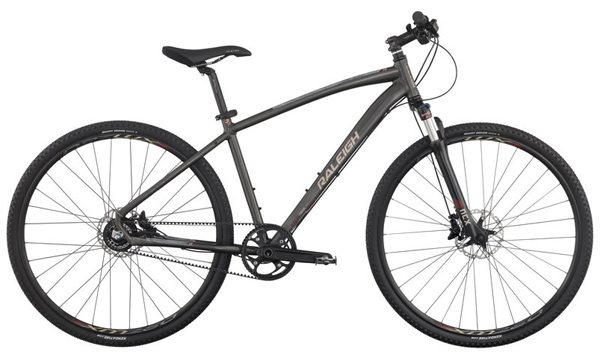 Belts
Gates Belt Drive is making a big splash in an industry in which the chain is iconic. When it comes to big brands, Raleigh has been one of the most fervent adopters with its XXIV single speed mountain bikes but most impressive at the show was the Misceo Trail i11 ($1,750), what the brand is calling a “utility” bike, good for commuting or joy riding on everything from roads to bike trails to dirt. It features a Gates carbon belt drive alongside a Shimano Alfine 11-speed rear hub, making it far more versatile than the SS belts most consumers associate with the technology.

Focus also debuted a multi-speed belt, the Urban TR 1.0 ($1,680), which had the slick, hipster look of older Swobo bikes and featured Tektro disc brakes alongside a Gates belt drive and Shimano Alfine rear hub. Of course, single speed is still where belts excel, and at the demo we hopped on Spot’s new Honey Badger ($2,599), a steel-frame, Gates belt single speed with a tapered head tube. The thing absolutely ate up the singletrack—we passed by other riders on geared bikes having trouble with little technical uphills and headed way out into the upper reaches of the canyon.

650B
At this point, 29ers are old news in the bike world. 650b, or 27.5-inch wheels are the buzz, at least at Interbike. The wheels split the difference between the big rolling ability of 29-inhc wheels and nimbleness of standard 26ers. At the demo, we tried Litepeed’s 3.25 Pisgah Ti hardtail, which is designed so that it can also take 26-inch wheels (or perhaps mix and match). It tracked amazingly well on the tight, technical singletrack and felt agile on the downs. Will we trade in our 29er for one? No. But the wheel size will appeal to women and smaller male riders who want the abilities of a 29-inch wheel but ride smaller-frame bikes. 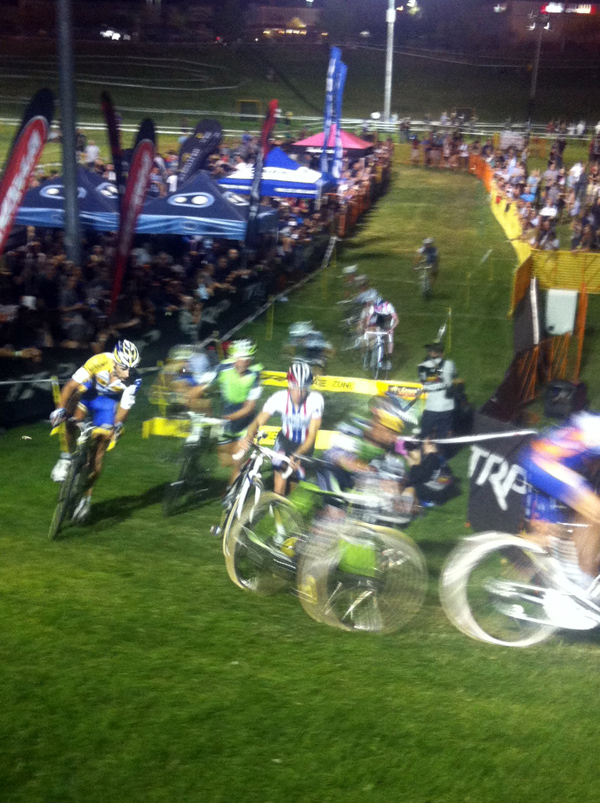 ‘Cross
While Cyclocross is still a niche sport in the United States, after attending an event like Cross Vegas, you wonder why that’s so. The event, which took place on the first night of the show, drew an international crowd of pros who went at it on a difficult grass course. For those attending Interbike, it was a chance to get away from the casino smoke and noise and chill out drinking beer in fresh desert air and watching some stiff competition in the races (the first UCI 1 ranked cyclocross events of the season).

The most exciting thing about ‘cross is that the fans can watch the entire race progress as it weaves along the course and up over barriers. Unlike crowds at a stage race (who just get one glimpse of their heroes whooshing by), ‘cross fans can see the entire race progress—and the pro races at 2012 Cross Vegas were a sight, with reigning U.S. champ Jeremy Powers rising to the front to stomp the men’s competition and the Netherlands’ Sanne Van Passen edging the field in a wild women’s finish. More mortal Interbike attendees got in on the earlier Wheelers and Dealers races.

Beyond the best riders on the planet, the truly great thing about cyclocross, however, is its accessibility: training opens up dirt roads and even singletrack and most local races focus on fun as much as competition, making them accessible to riders who might not otherwise race. Plus, the bikes are affordable compared to high-end road and mountain rides. 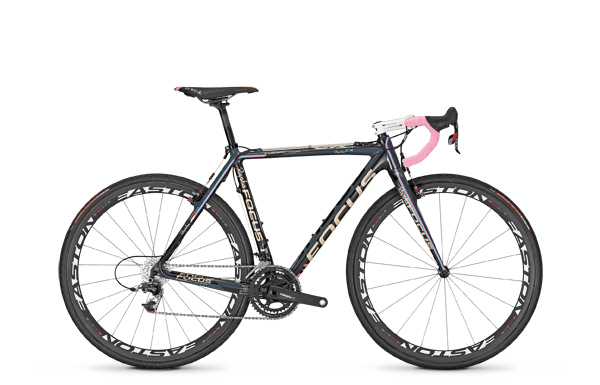 At the show, German brand Focus (Jeremy Powers sponsor) showed of its top-of-the-line Mares 1.0 Rapha-Focus, which features the same spec as the U.S. champ’s bike, with an all-carbon frame, BB30 bottom bracket, a full carbon tapered ‘Bulldog’ fork, SRAM Red gruppo componentry and an Easton Cycling EC90 SL tubular wheelset. That retails at $6,440, not bad for the best on the market. On the other end, Focus’ Mares AX 2.0 Disc, rings up at a reasonable $1,740 with a triple-butted alloy frame, Shimano 105 componentry and Tektro Lyra mechanical disc brakes.

Quick Hits
There were three more quick little items that caught our interest at the show. Top among them is SRAM’s XX1 componentry group, a single front chain ring paired with an 11-speed rear cassette that serves up the power of a double-ring front ring—that offers a big weight savings as well as simplicity for racers and XC riders who won’t have to worry about a front derailleur. 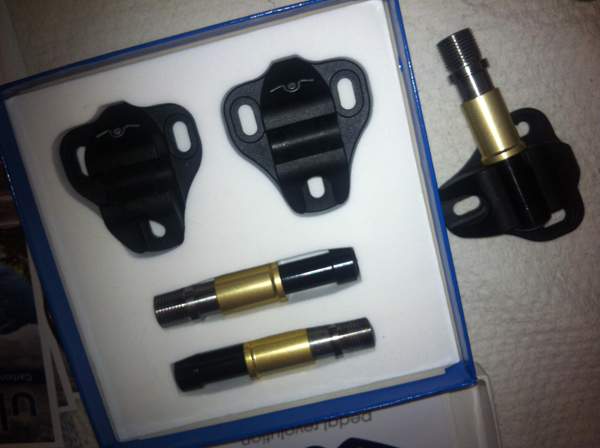 Second, Colorado-based Ultralight Sports introduced the lightest road bike pedal system on the market, the Cirrus TI ($395). Weighing in at a scant 112 grams (72 grams for the pedals and 40 grams for the cleats), it looks like a nub, yet still delivers full power transfer.

Also, WD40 has finally entered the bike market with a collection of wet and dry lubes it has put its full R&D capacity behind—we will let you know how they work.