How to Care for your Climbing Rope 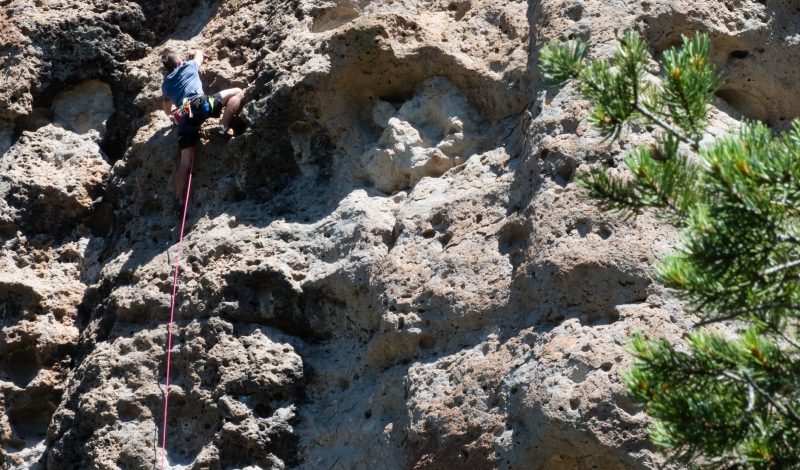 Modern climbing ropes are durable and can take abuse before they show signs of wear or fatigue, but ensuring long-term safety and durability requires some efforts by the climber. Proper climbing rope care through certain methods of handling, washing and storing the life-preserving cord can maintain performance, longevity and peace of mind. Knowing when to retire a climbing rope is also critical.

It may not be obvious, but proper handling of climbing ropes can begin with unpackaging. Manufacturers coil the rope, and properly uncoiling it can reduce future battles with kinks and twists. It is best to put the coiled rope around the forearms, spreading the arms, so the rope forms a ring. Rotating the arms around each other while keeping outward tension applied to the ring will unwind the rope without introducing twists. Then flaking the rope from one end to the other a few times will relieve any residual twists or kinks. The rope can then be recoiled, or better yet, stored in a rope bag.

Proper handling then continues at the cliff or gym. Climbers should make every attempt to keep the rope clean. Using a rope tarp keeps dirt and other debris from contaminating yarns. Crystals or sand present in some dirt can work their way into the core and damage the load bearing yarns. Any dirt can render the rope stiff and difficult to handle. Rope tarps are an easy way to eliminate the major source of contamination along with avoiding stepping onto the rope. 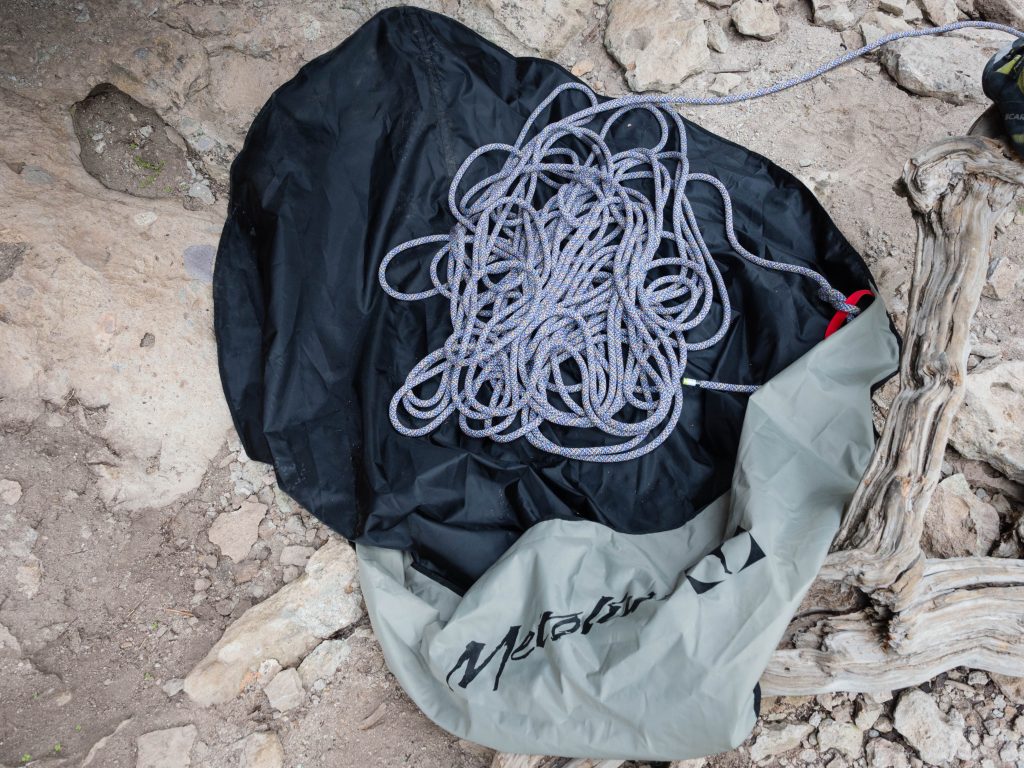 Another often overlooked source of contamination is chalk. Overchalking of hands can contaminate yarns, particularly the first few feet past the tie-in. Tests conducted by Edelrid demonstrated that coating a section of rope with magnesium carbonate caused a significant decrease in the number of load cycles tolerated. Best to chalk up after tying in and at the very least, brush excess chalk off the hands before untying.

Limiting abrasion should also be a major concern at the cliff. The rock, carabiners and belay devices can all contribute to abrasion and sheath damage. The rougher, sharper and heavier loads the rope endures, the faster the sheath will be compromised; progressively getting rougher, fuzzier and thinner. Eventually, the core can protrude, signaling the end of the life of at least that section of cord. Proper rope management avoids sources of abrasion as much as possible and can include using packs, jackets and such to pad the rope from sharp or excessively rough surfaces. Specialty products like the Sterling SafeGuard rope protector can be extremely useful for protecting the rope from aggressive edges and abrasion from other ropes and gear. Proper lowering and rappelling speed is also important to safeguard the rope against friction burns and ropes should never run against each other or through slings.

Having a rope that is the proper length for the height of the cliff or gym wall is also helpful. Using a rope that isn’t overly long and pulling the rope through to switch ends keeps twisting and kinks to a minimum. It also keeps the sheath slippage correctly distributed along the length of the rope. An overly long rope that is pulled through and climbed on both ends pushes the sheath to the middle section of the rope. Also, the rope does not hang freely to alleviate this sheath bunching. It is optimal to have proper rope lengths to match the climbing venue; the reduction of carrying weight is a bonus.

Brooke Sandahl of Metolius Climbing (their Metolius Monster 8.9 was our skinny rope Best In Class for 2017) also recommends switching ends and giving the rope a 10-15 minute rest after a hard fall to allow the rope fibers to recover their elastic properties and be better prepared to absorb subsequent loads.

Washing a dirty rope improves handling and can extend the usable lifespan. The best way to wash a rope is by hand in lukewarm water using a mild soap (not a detergent) or a specifically formulated climbing rope wash. The delicate cycle in a washing machine is acceptable with the spin cycle eliminated. Using a mesh bag in the washing machine will reduce the formation of kinks. Dry the rope by spreading it out on a clean tarp in a cool, dark place. Never use a tumble dryer or hang the rope in the sun to dry!

It is best to store a rope in a cool, dark place, in a rope bag. Direct sunlight, heat, moisture, chemicals and any potential source of mechanical damage are also on the avoidance list. Strong acids are particularly harmful; they can destroy the core with very little visible damage to the sheath.

Climbers often have difficulty retiring their beloved ropes. Although it is impossible to set hard rules, these are some general guidelines on when to retire a climbing rope:

Never used: 10 years
Used occasionally, stored properly: three to six years
Regular use and takes lots of falls: one year of use, then top rope use only

Respecting what the rope has gone through and determining damage through regular inspection is more important than the age of the rope. Any rope that has suffered damage or extreme forces should be retired immediately. Retirement is also necessary should a visual inspection reveal any of the following:

Use common sense and err on the side of caution, the rope is designed to save your life!

Items needed to finish the end of a rope:

Wrap the rope tightly with tape at the point you want to cut. Just a couple of wraps is fine. Too much tape will just make it more difficult to cut.

With the razor knife or sharp scissors cut through the tape wrapped portion of rope at roughly the middle of the width of the tape. If done well this will leave a nice squared off rope end.

Once the squared off end is nicely melted and sealed remove the tape and proceed to “butter” the sheath of the rope half-inch to 1 inch back from the end. It may be necessary to reheat the butter knife several times during this process. Be sure to do the melting in a well-ventilated area and avoid inhaling the fumes from the melted nylon.

A climbing rope is a lifeline. Treat it accordingly, inspect it regularly, and retire it when it’s time.