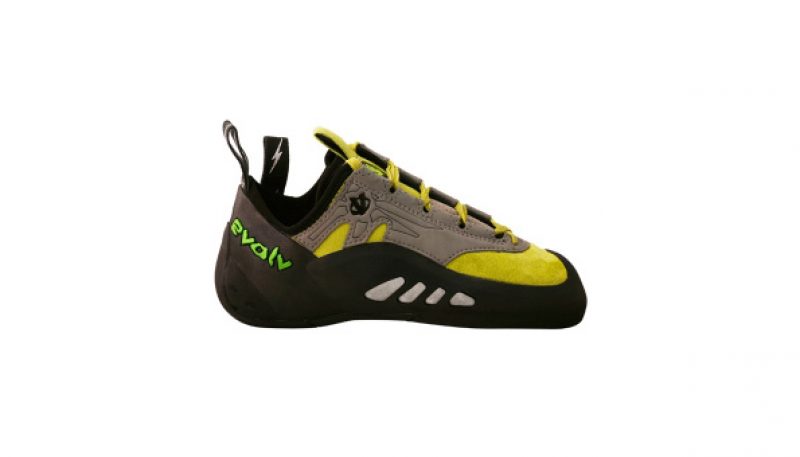 Overall, we found the Geshido to be a highly capable steep-face and trad performance shoe, with excellent edging without undue foot trauma, though the rubber is a touch too thick to keep pace with the highest-performance shoes. We had a slightly rocky relationship with the “love bump” curl to the toes, which is probably best for narrower feet.

The Geshido is a sexy-looking shoe—black, green, and grey with patterned uppers that look like the armor cladding the Battlestar Galactica. Reminiscent of the Five Ten Anasazi Verde, they seem to fill a similar performance-face and all-around niche as that classic shoe.

Precision
Out of the gates and as I broke the shoes in, I noticed a true sense of feel and command in the toe box: that sort of biting precision you get with a toe that’s been downturned subtly and well, but not to such an intimidating degree that it screams, “I’m only good in upside-down a muerte sickness caves!” This played out nicely on Boulder Canyon granite (slippery, lots of micro edging and unhelpful divot-smears), and even better on the crystals and bumps of rippled Flatirons sandstone, where the angle tends toward vertical/gently overhanging. In the gym, I was able to augur in to gerbily micro-jibs on the 30-degree-and-beyond overhangs. The full lace-up closure gave good control over fit.

The “love bump”
Along with the downturn, these shoes have what Evolv calls a “love bump,” a feature also found on the Shaman. A pronounced, circular, mid-forefoot node, the love bump is essentially the convexity from the 1mm half-length concave midsole protruding into the footbed, forcing your toes into a prehensile grabbing position. The idea is to remove dead space, while transferring edging power to the outside of the shoe.

Our take? Good for some, not for others. For people with a certain foot shape—narrower, low-volume—this will be a welcome new feature. However for those with my wide, high-volume forefeet, you might find your toes love-grinding against the side of the shoe.

Thick, slippery (in cold) sole
As with the Evolv Prime SC, my main gripe with the Geshidos came with the thickness of the sole (4.2mm Trax-XT rubber) and its propensity toward being slippery under cooler conditions, which is probably when you’re most likely to want a performance shoe (optimal sending temps!).

The Trax-XT holds a mean edge and lasts an impressive amount of time, but as with any durable rubber it is also hard, especially with cooler ambient temperatures, and can tend toward being slippery. Also, the thick slab of sole is, in my opinion, a millimeter too beefy for what you’d ask of this shoe: it tended to roll under high pressure—like when I was standing on credit-card edges—simply because there’s too much rubber and not enough give.

Good quality, versatility
That said, these shoes are incredibly well built (they won’t stretch much: maybe a quarter-size max) and should stand up to multiple resoles, making them a solid long-term buy.

Also, the slim, flat toe box made the Geshido fluent and comfortable in cracks, meaning they lived up their “all-around performance” status. I could see taking them to Red Rocks or Joshua Tree, places where you have to get your crack and face on, sometimes on the same climb, with precision.

The Geshido SC is the Velcro version. 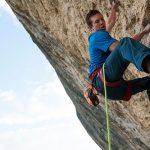