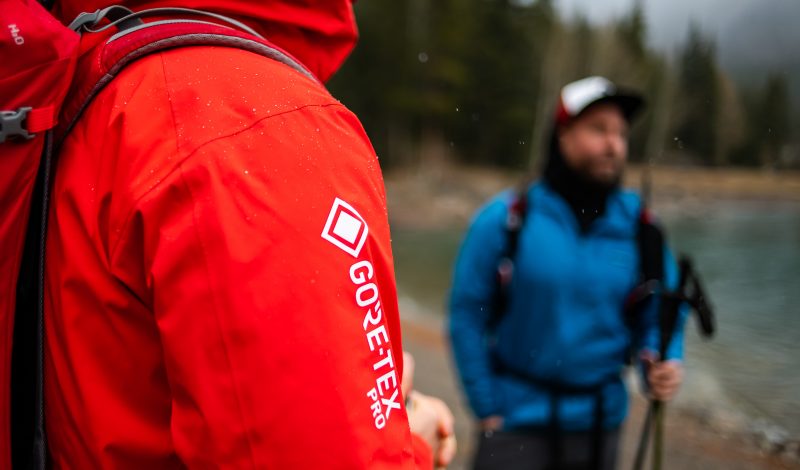 Gore assembled a field of its engineers, product specialists, sponsored athletes, and a select group of journalists in Banff last week to unveil a new version of Gore-Tex Pro, which will be available from their brand partners in the fall of 2020.

The new Gore-Tex Pro will be available in three versions: most durable, stretch, and most breathable, and partner brands will be able to use all three component technologies in a single garment to optimize performance and comfort. Of these three technologies, the stretch is the most prominent characteristic. Gore also explained initiatives to advance the sustainability of their offerings. 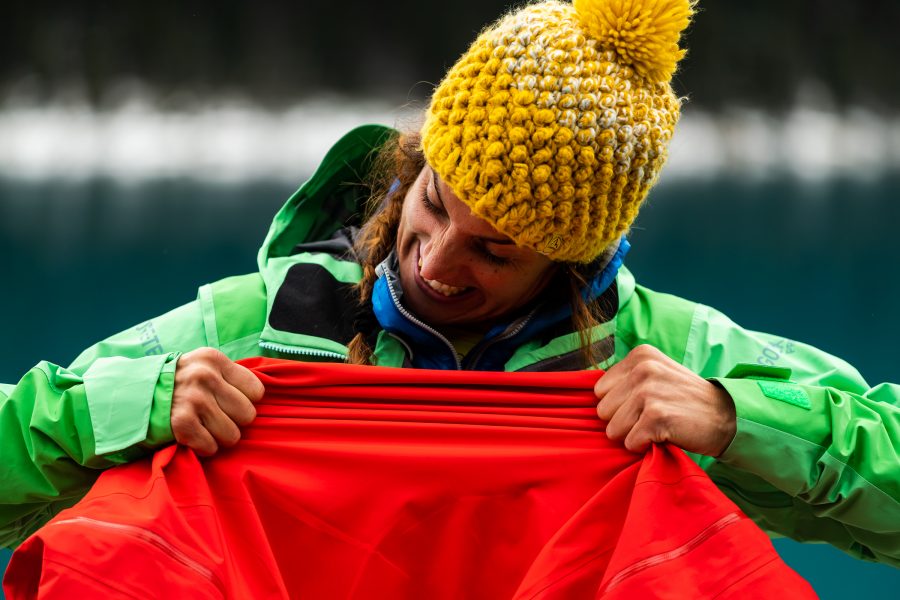 Gore admitted that gaining an advantage in one area necessitates a loss in another; the one “ultimate, do it all well” (WP/B) fabric is a pipe dream, and the best solution is to make “best of” fabrics and allow product designers to mix and match. Thus, the three new technologies, all in three-layer laminates:

All these versions of Gore-Tex Pro pass ISO certifications for waterproofness, windproofing, and breathability. 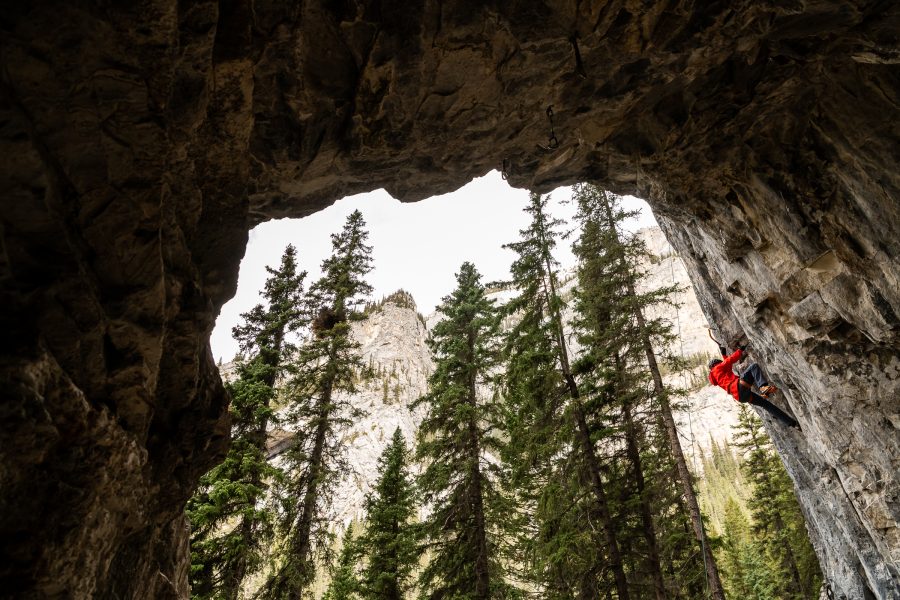 Gore gets lambasted at times for being environmentally unfriendly; opponents of Gore-Tex fabrics state the lack of biodegradability of ePTFE and that it will “be in the landfills forever.” But this is one physical characteristic that Gore applauds; not only do Life Cycle Assessment (LCA) results show that the best way to minimize the environmental footprint of a jacket is to enhance the durability, ePTFE resists breaking down and dispersing into water and soils as harmful constituents such as PFCs. ePTFE also doesn’t react with the body, ensuring it isn’t harmful to health.

The new Gore-Tex Pro in the field 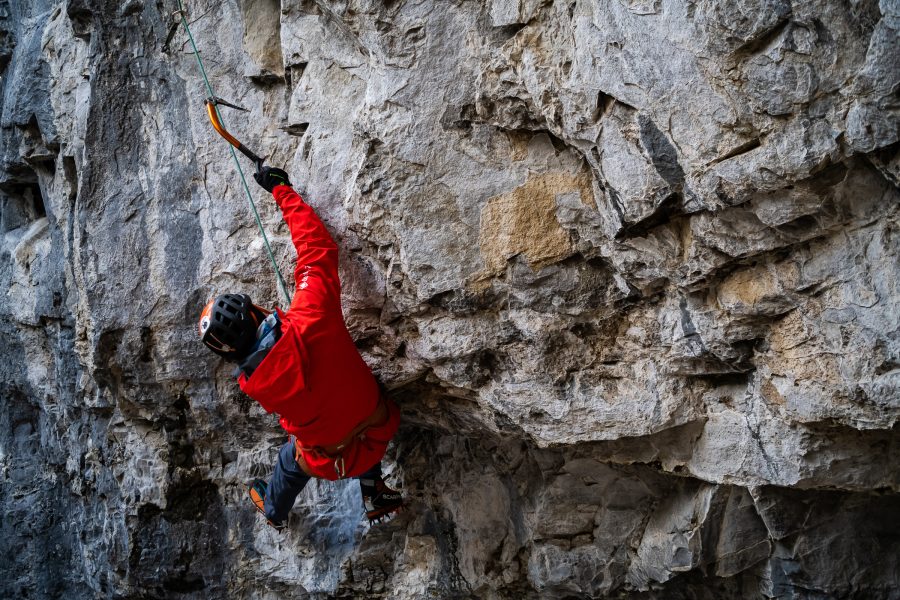 The obvious departure from current Gore-Tex hard shells I own was the stretch; navigating a ropes challenge course in abominable winds during my first outing showed the improved mobility due to the Gore-Tex Pro stretch technology in the back panel. This elasticity, by far, was the most impressive attribute of the new Pro family to me. It is a perceptible difference that made a measurable gain in comfort and performance for every activity pursued in Banff.

The new Gore-Tex Pro buffeted the incredibly frigid winds just like any other Gore-Tex three-layer jacket I’ve used, which reinforced the great wind-blocking ability that I’ve grown to trust. 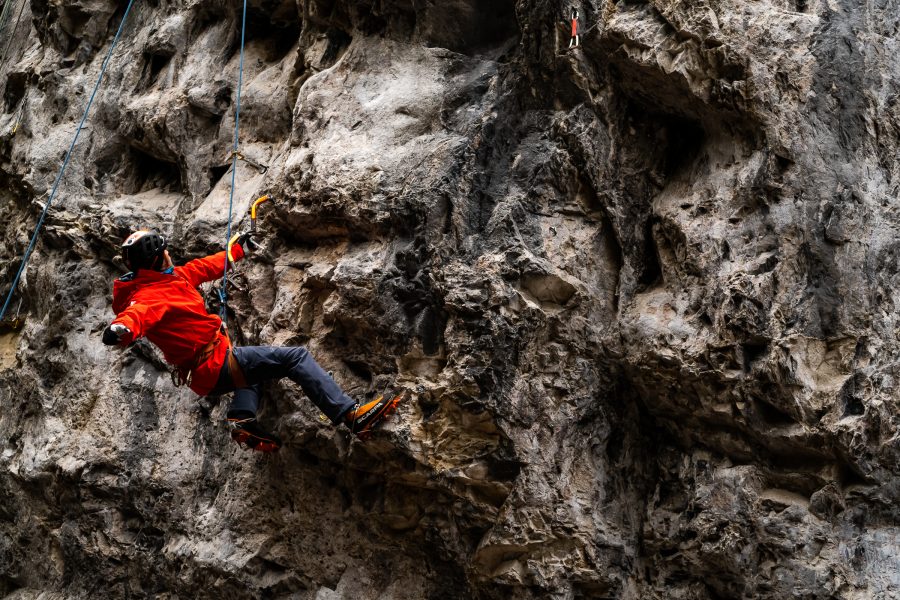 I dragged my arms on cables and other steel hardware on the ropes course and did the same while rock climbing and dry tooling on jagged limestone. The abuse was enough to leave black marks all over the forearms of the jacket, but no physical damage occurred. I also purposely bushwhacked through bushes and branches to no avail. Three-layer Gore-Tex has always been amongst the most durable fabrics in my arsenal of apparel and has been more robust by far than other WP/B fabrics, some of which I’ve destroyed from abrasion in one climbing trip. 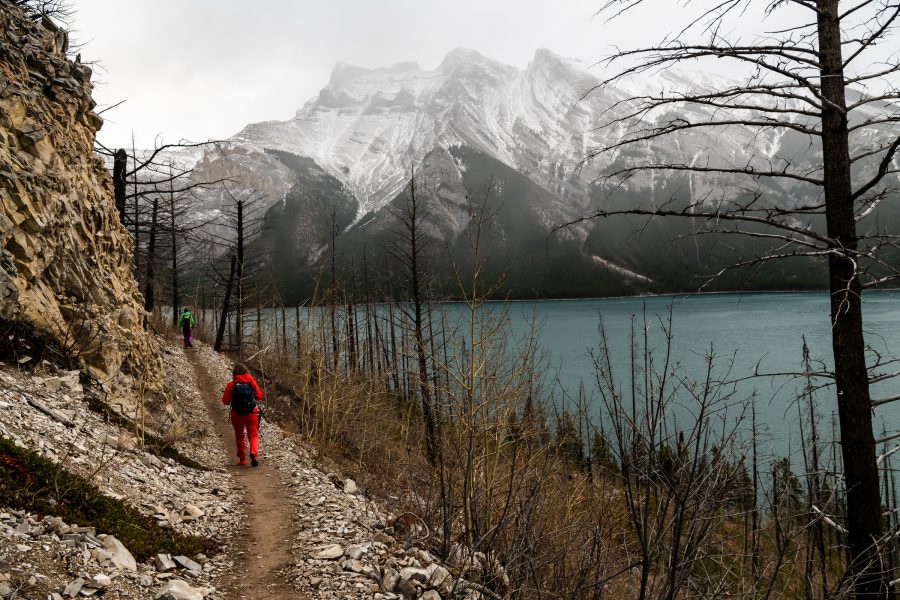 I’ve always wanted to see massive gains in Gore-Tex breathability, along with almost every other adventurer I know. Although Gore touted it’s most breathable technology within the new Gore-Tex Pro trio, the ePTFE membrane remains unchanged. Manipulating face fabrics may improve vapor transmission, but the heart of the system in the new Gore-Tex Pro is the same as always. This unchanged membrane was a let down to me; I know having high breathability with high weather resistance and durability may be unattainable, but I did have hope Gore engineers and scientists had broken the breathability vs. waterproofing continuum.

Alas, the new Gore-Tex Pro most breathable technology perceptually felt as breathable as my current Gore-Tex Pro, which is to say in the real world, a little bit. Yes, it is much more vapor permeable than a non-breathable shell, but the breathability is usually overwhelmed by bursts of high-intensity activity.

But, Gore-Tex has saved my hide on many occasions; the breathability it does have has kept my insulating layers dryer than would be possible without it and the durability has been second to none for WP/B shells. When the stakes are high, Gore-Tex shells are still the go-to for me.

Is the new Gore-Tex Pro worthy of the hype? Yes and no.

The stretch technology is a game-changer for Gore-Tex; it provided an obvious and immediately felt benefit to both performance and comfort. Kudos to Gore for magically compressing the ePTFE membrane to give it stretch without compromising physical integrity.

Legitimate lab and field testing show Gore-Tex Pro most rugged technology to be just that, the most rugged ever offered by Gore. I only used the jacket for a few days, so final judgment from me awaits further testing. But I have no reason to doubt the testing has shown to me that demonstrated the added polyurethane element has upped durability.

The Gore-Tex Pro most breathable technology represented the only area of disappointment for me. Breathability is the characteristic of three-layer Gore-Tex laminates that I’ve wished for improvements, with the possibly unrealistic hope that the other attributes remain unchanged. The ePTFE is the same as always and remains the bottleneck for vapor transmission in my view.

So some hype is deserved; the stretch alone is a huge improvement, and to the hardcore, the enhanced durability can be a lifesaver. And the ability to use hybrid construction with all three Pro fabrics expands design potential and gains in both performance and comfort. But I could feel the communal journalist sigh when Gore staffers revealed that the membrane itself remains unchanged.