Backcountry skis are designed for non-lift access skiing. Specifically, not at a ski resort or ski area but in the backcountry. They are also known as Alpine Touring or AT skis although those terms imply a specific style of ski binding, the popular AT binding. Backcountry skis could also have what’s called a Telemark binding mounted on them.

Nevertheless, these skis are continually pushing the boundaries of up and downhill performance with new designs, materials and construction. Unlike traditional Alpine skis where weight is not an issue and performance dominates, backcountry skis are constantly concerned with being light weight so that the uphill efficiency is not significantly compromised. Backcountry skis range from five to nine pounds (per pair) in weight. Any skis above nine pounds are just heavier than is necessary. Exceptions may include if you just have to have a certain pair of skis with you and it’s worth the effort to haul that extra weight up the hill. Odds are you are in your early 20’s or some sort of masochist. The reality is, just about any kind of binding can be put on any kind of ski.

Because of this constant drive to reduce weight several materials are fairly common in backcountry ski construction, namely carbon and polownia wood as both offer up impressive structural qualities while not weighing much. The reduction of ski mass is also an easy way to reduce weight and both G3’s FINDr and Volkl’s 100Eight skis integrate a center ridge down the ski with substantially less material near the edges. G3 calls this FLYRIDE PLUS construction while Volkl has termed it their 3D.Ridge construction. While these similar design philosophies are effective at reducing weight it’s Black Diamond’s Helio 105 skis that are actually the lightest skis tested by nearly half a pound.

The holy grail of backcountry skis is the perfect combination of light weight and high performance. While there are far lighter skis on the market than the ones highlighted here, they run the risk of sacrificing performance, something that becomes quite evident on icy or hard packed conditions. While this type of snow is not typical for backcountry skiing, it is encountered and will immediately let you know that the ski is suited more for the climb up than the ski down.

The optimum balance for a backcountry ski is one which can be light, yet stable while still being versatile enough to conquer mountains and crush resort laps. 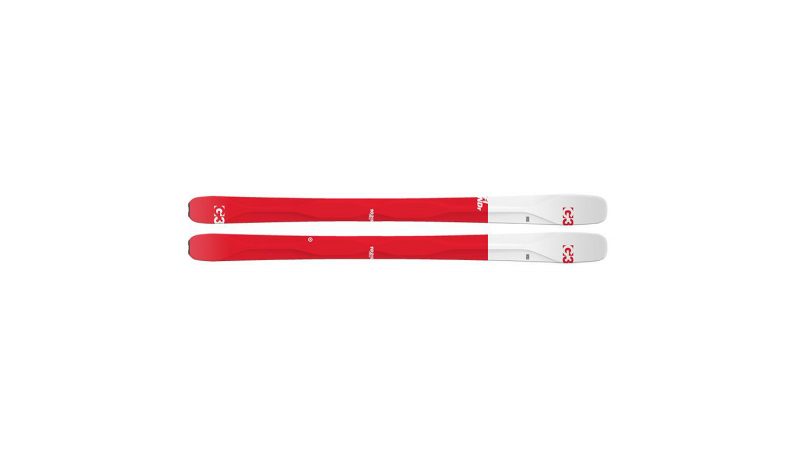 While the Polyurethane sidewall improves dampness and durability, the real benefit is how playful it makes the skis. For me, this is the FINDr’s biggest benefit (coupled with their more than reasonable price tag). A similar ski from Volkl (like the Katana Vwerks) will run you an additional $400. They float in backcountry powder, climb easy on the skin track, and are super fun and playful in bounds, while still being able to carve and lay down hard charging lines on groomers—It’s the do-it-all ski. 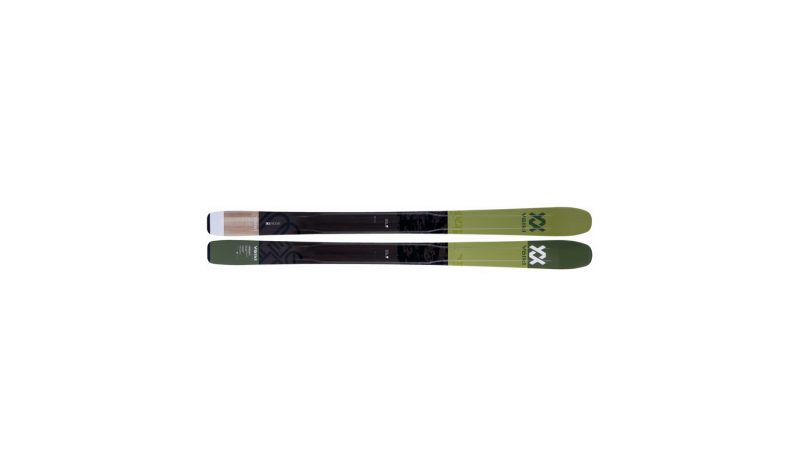 Like the Volkl V-Werk Katana and V-Werk BMT 109 Skis, the 100Eights are a powerful ski that likes to go fast and play hard. With enough mass to plow through variable snow conditions and tackle any terrain you throw at them, the 100Eights are a serious quiver of one ski. The only downside to these sticks is their almost nine pound weight, which is a little on the heavier side for a dedicated backcountry ski. 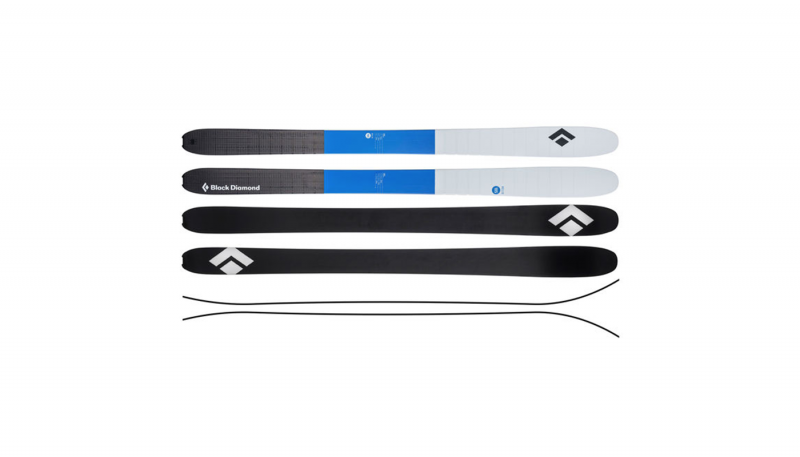 The Helio 105 Skis are just what Black Diamond set out to produce: a lightweight mountaineering ski that is more at home in the backcountry than at the resort, designed for powder over groomers, and slarving over carving. If it’s a lighter, faster version you’re after, check out the 88 and 95 versions. Need more float? Consider the super fat 116 version.

While backcountry skis have not really evolved in any huge, revolutionary way over the past few years—they are benefiting from advanced materials and construction methods which continue to make them lighter. This is only half of the equation, however, as they also need to maintain power and playfulness. This is the magic combination that G3 has created within their FINDr Skis and not to be out done, the Volkl 100Eight Skis follow close behind. While both skis are not the lightest in this category, especially when compared to the Black Diamond Helio 105 Skis which are a half pound lighter, they do provide substantially more fun and versatility.

There is a trade off between weight and versatility but that gap is closing and the the current crop of backcountry skis is increasingly showing more promise to skiers who want it all. As we test these skis, we focus on five specific criteria: performance, stability, versatility, weight and float. Below we compare each of the skis in these criteria. Check out our full reviews of each ski for a deep dive into our test criteria analysis.

The performance of a backcountry ski is a combination of many things, specifically it’s ability to climb efficiently and provide adequate float in deep powder while holding an edge in more challenging terrain or on wind packed snow. The ability of a ski to possess these attributes comes down to the ski’s weight, dimensions and construction. While you want a backcountry ski to be as light as possible there is such a thing as being too light—this is the point where you sacrifice too much weight for performance. Adequate weight and ski width is required to ensure the ski is not deflected by variable snow but rather charges through or over these obstacles. A ski’s weight and construction also greatly affect its performance on hard pack snow and its ability to hold an edge when needed. Conversely, you don’t want so much ski weight that it’s a penalty when climbing uphill. Since you spent as much as 95% of the time climbing up while ski touring, you want to ensure that your choice of ski is light weight to minimize fatigue.

Improved stability generally comes with a wider/fatter ski, which is a welcome attribute no matter the terrain or snow conditions. Stability matters most on more technical, steep terrain and in variable snow conditions. While some terrain can be managed or avoided, weather conditions are constantly changing so a more stable ski is ideal when deep powder isn’t on the menu but rather a wind hammered traverse, icy glacier or a chute filled with chunder. The down side of stability is that it is usually associated with a heavier ski so climbing performance typically suffers.

Backcountry skis are designed to be fat and light so that they can move efficiently uphill and carve deep lines on the way down, however, they also need to be able to handle adverse conditions such as wind slab, crust and chunder. This is where a ski’s versatility comes into play and a good backcountry ski should be able to handle not only ideal conditions but adverse ones as well. While resort skiing is typically manicured, backcountry skiing is anything but and a good touring ski needs to adapt no matter where it’s ridden and what the conditions are.

Backcountry skis range in weight from five to nine pounds with lighter skis being more efficient at climbing and heavier skis being more forgiving on the ski down. While weight alone is an easy way to qualify backcountry skis, it’s important to also consider overall ski dimensions for a more accurate picture of how light a ski is in relation to how it will handle deep snow. Lighter skis tend to be thinner and will therefore not float as well in deep snow. Ideally you’d want a fat ski which is also light, but be forewarned that there is a such a thing as a ski being too light. In this case it may perform well on the up but not be able to handle the challenges of variable snow conditions on the down.

A backcountry ski’s float is derived primarily from it’s width and overall profile. The fatter a ski is over its length, the more float it provides but this also has to be combined with a generous amount of tip rocker in order for the ski not so submarine. These attributes help with ski deflection in challenging snow conditions as the ski will ride over or through obstacles rather than getting pushed around them. Ski width is measured underfoot and a respectable powder ski is typically 100mm at a minimum in this location. The tip and tail are wider in size to provide float and efficient turn initiation and completion.

All of the backcountry skis tested were skied in and out of bounds on hard packed and icy snow conditions as well as in deep powder. Each were scrutinized not only for their downhill performance but also their uphill prowess. Each ski was used on a number of short side-country laps to ensure that it was exposed to the widest variety of snow and terrain conditions, as well as on longer day tours in order to experience how it climbed and skied over time. Testing continued in bounds at a lift serviced resort on groomers, bumps and in the trees to see what they could handle—even though these were not conditions they were designed for.

What is a Backcountry Ski?

Backcountry, or alpine touring (AT), skis are very similar to the more common alpine or ‘downhill’ skis and can often do double duty at the resort as well as in the backcountry. The primary difference between these two types of skis is that backcountry skis are generally fatter, since you’ll generally be skiing deeper snow out of bounds of the resort. They are also much lighter than downhill skis since they have to be proficient at climbing up the hill rather than taking a chairlift. Because of this, backcountry skis typically have some sort of tip and/or tail connection point for skins. While backcountry skis come in all sorts of widths, weights and lengths they are designed with deep snow and going up hill in mind. The exception to this are backcountry skis specifically designed for rando racing which are closer in width to cross country skis and are designed purely for speed on the climb and not the ski down. 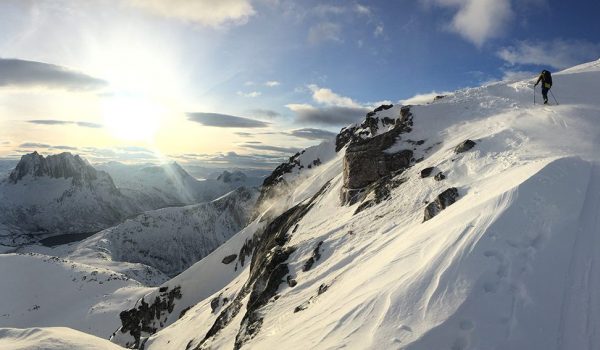 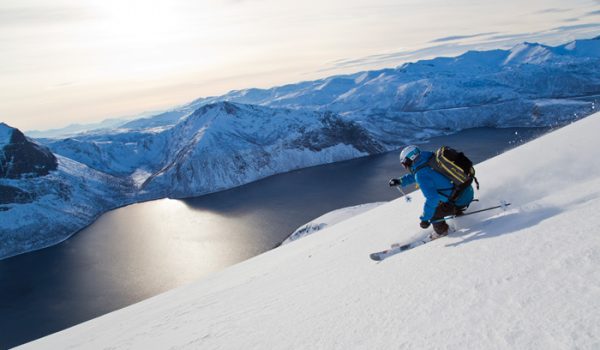