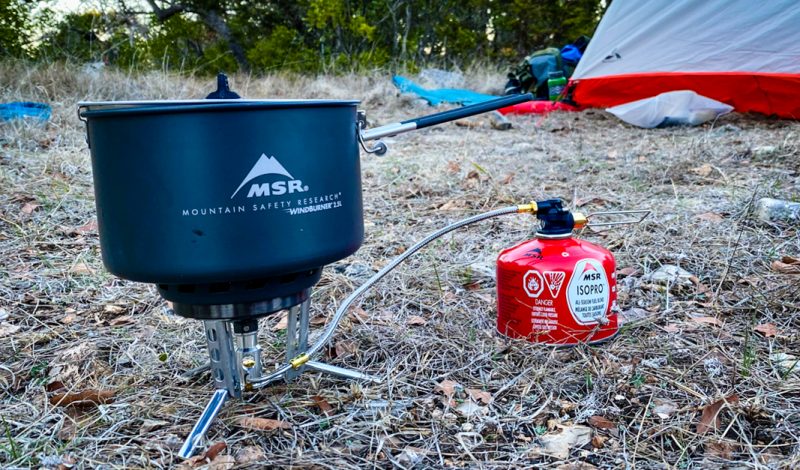 After decades of research and over five years of development, MSR debuted radiant burner technology in 2007 with its Reactor stove system. It soon became the coveted snow melting machine for mountaineers and alpinists, the flameless stove putting out 9,0000 BTUs/hour. The Reactor unapologetically claimed the throne for hydrating climbers up high but was incapable of really cooking.

MSR followed up with the release of the Windburner Personal stove system in 2014, dialing the radiant stove back on output to increase usability. The brand released a remote canister, group-oriented version in 2018, and we’ve been testing the Windburner Stove System Combo (MSRP $260) for a few months during car camping and backpacking trips.

The Windburner Stove System Combo is an excellent choice for the adventurer demanding efficiency and durability for outings of 2-4 people. The stove is super resistant to wind and does an adequate job of cooking using lower heat outputs. The included ceramic cookware proved non-sticking, greatly easing life on the trail.

How does a radiant burner work?

Instead of an open flame, radiant burners use a porous material to mix fuel and house the flame, producing both convective and radiant heat. Other stoves only generate convective heat. The porous material in MSR Radiant stoves is a Fecralloy disc that has the structure of open-cell foam. The generated heat spreads across the upper surface of this disc.

This Reactor technology mixes air and fuel within the stove and doesn’t rely on air coming in from the outside as other stoves do. This 100% primary air usage means the flame can be completely enclosed and protected from the wind with integrated heat exchangers.

The MSR Reactor and Windburner stoves are the only radiant burners in the outdoor market and are the only outdoor stoves that operate on 100% primary air.

The stove and 8-ounce fuel canister nests inside of the saucepot, and the detachable and folding handle locks the lid. The pot has a separate latch to secure the lid during strainer use.

The Windburner stove uses a pressure regulator for consistency regardless of fuel level and the remote fuel line is a generously long at 11 inches. The folding wire fuel adjustment knob is a large, glove-friendly size.

The legs on the Windburner remote stove are unique; they slide down the frame and then fold out on their own due to spring tension, forming a 7-inch diameter base of support.

The Windburner remote stove has a verified weight of 8.8 ounces. The 2.5-liter saucepot with handle and lid weighs 12.2 ounces, while the 8-inch skillet with handle weighs 7.7 ounces.

The Windburner Stove System in the field

The first noticed attribute was the stability of the Windburner remote canister stove; with the heat exchanger centering the 2.5-liter pot and the large base provided by the lunar lander style legs, the system felt much more stable than stoves without a remote canister.

The 6.2-minute claimed boil time for one liter seemed accurate; this was not the flame thrower the Reactor has proven to be. But the Windburner had much better temperature control and was able to simmer adequately. The limiter to non-supervised simmering was the heat exchanger on the pot or pan. The heat funneled into the exact footprint of the heat exchanger in the center of the cooking surface. I could simmer soup without scorching with occasional stirring.

Holding to its name, the Windburner was nearly impervious to the wind; gusts that would shut down other backpacking stoves proved futile in affecting the fully enclosed radiant burner. Even blasts that folded tent sidewalls didn’t stop the Windburner from boiling water.

The skillet and sauce pot proved to be non-stick. Cooking bacon or simmering soups with too much heat didn’t cause anything to adhere to the ceramic coating. Even burnt cheese failed to cling. A quick once over with a plastic scraper and rinse was all that was required most of the time for cleaning.

MSR only offers a piezo ignitor on their Pocket Rocket Deluxe, but the Radiant system begged for them. The Radiant technology disc fully enclosed the air and fuel mixture, which made for close encounter lighting, and lack of a visible flame created doubt if ignition occurred. An indicator wire glows within a few seconds of ignition, sparing burnt knuckles with a little patience.

The inability of the skillet to nest created some packing issues, but I couldn’t see a solution without a radical change in dimensions of the saucepot, skillet, or both. One concern with the stove and fuel canister nesting inside the saucepot was the potential damage to the ceramic coating, which would inevitably ruin the non-stick nature. MSR seems to fear this on some level, as they included a felt pad for the bottom of the pot. This pad won’t protect the sides, but the bottom is far more important to keep intact.

Then there was the 8.8-ounce weight of the bare stove. The MSR Wind Pro II, another remote canister stove, has a claimed weight of 6.6 ounces. The Reactor weighs 6.1 ounces and it’s a high output alpine rocket. The non-system MSR Pocket Rocket 2 weighs 2.6 ounces. The Windburner remote canister stove wasn’t the stove for minimalist ounce counters, for whom there were much lighter options.

But the Windburner was robust; MSR built the stove to last, and It was the most rigid remote canister stove I’ve ever tested, with pot stability to match.

Who’s it for? I found the Windburner Stove System Combo to be a Goldilocks of stove systems. It’s not ultralight or compact, but the weight and size can be appropriate for groups sharing a single stove. It’s not the snow melting powerhouse that the MSR Reactor is, but it’s more windproof and stable than other backpacking options.

The MSR Windburner Stove System Combo is a fine choice for backpacking trips for one or two where ounce counting isn’t necessary and there’s a craving for food more demanding than a boil. It’s a great lightweight option for groups of up to four venturing into the backcountry with a single stove. It’s also a great car camping stove that takes up way less room and is much cleaner than a typical dual burner. And the system can do it in all conditions just short of arctic.