Leatherman FREE — Behind the Tools 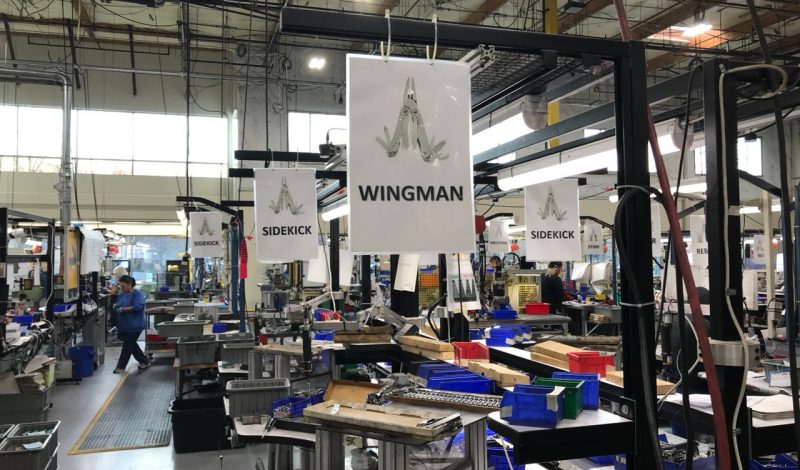 Walking onto the factory floor at Leatherman HQ in Portland, OR I am immediately impressed by the sheer scale of their operations. I have owned a Leatherman for years, and knew first hand their durability, precision, and quality, but I didn’t fully appreciate the work that went into producing the tools themselves. Their 90,000 square foot factory is where every Leatherman tool is produced, start to finish in the USA.

Large rolls of steel are fed into a giant press where it’s cut into parts using what’s called a die. Die’s can be changed to produce each steel part that goes into a tool. Tim Leatherman himself leads us as we weave our way from the 300-ton press area, which required a supplemental foundation, past laser cutters used to churn out knife blades.

We view large tubs of pebbles and water used to “wash” away the sharp edges of tool parts and make them smooth to the touch. Then on to the area where workers assemble the pliers and adjust the amount of force needed to open and close them until they are right on spec. In fact, Leatherman employs over 500 people at their Portland HQ and produce about 8,000 tools per day.

The final assembly of each tool is done by hand, ensuring the quality for which Leatherman has become known — they guarantee their tools for 25 years, fixing or replacing damaged items with no questions asked. The most common reason for tool replacement, according to Leatherman, is corrosion that occurs when left outside for extended periods or left on a boat (stainless steel can corrode, especially when exposed to chlorides like salt).

Not only does Leatherman employ hundreds of people at their headquarters, but there are also robots on the factory floor that take care of tasks like grinding and buffing parts.

I was invited to Portland last month for a first look at the new Leatherman FREE series multitools, which launch today for purchase on the Leatherman website. Leatherman engineers are touting the FREE tools as their biggest innovation since the inception of the original Leatherman PST (Pocket Survival Tool). And they’re not exaggerating. The biggest change — the addition of magnets which allow for one-handed, switchblade like opening of the pliers as well as easily accessible tools and blades.

Leatherman engineers typically spend two years on the development of a new multitool from concept to production — the FREE took five. Only the original PST took longer, seven years according to Tim Leatherman, but he was working out of his house with a tiny budget. Leatherman had to reinvent their manufacturing processes in order to bring the FREE to life. The level of precision and lower tolerances needed to achieve the functionality and feel of these new tools were head and shoulders above what they were in the past.

The final part of our factory tour was located in what they call the “Torture Chamber.” A laboratory where multitools are used and abused by hand and machine. Tools are opened and closed thousands of times on a machine table. Blades are tested to cut seatbelt material, paper, and nails. Tools are subjected to corrosive liquids, and other elements to ensure their resilience. Thanks to the elastomer rubber inserts in the new FREE P-Series multitools their QA engineers cannot wear-out the opening/closing mechanism — even after a million cycles in the Torture Chamber.

I’m excited about these new tools and my FREE P2 has already replaced my Wave as my EDC. Stay tuned to gearinstitute.com for a full review of the Leatherman FREE by Nick LeFort in the next few days!