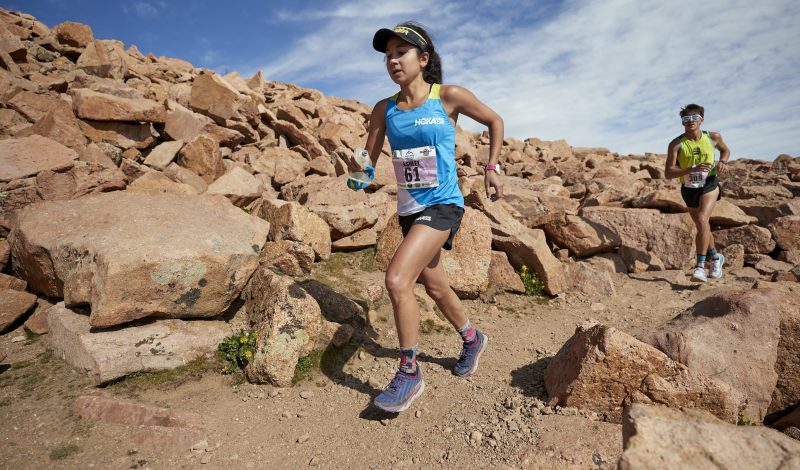 After Ashley Brasovan won the cross country national championship in 2007, it looked like she was on the cusp of a promising running career. But a series of training-related injuries over the following years kept her from approaching her potential.

Today, running for HOKA ONE ONE®, the Colorado trail runner has enjoyed a resurgence. After earning a master’s degree in Environmental Management from Duke, Brasovan moved to Colorado in 2015 and found a love for trail running. Running a variety of trails and softer surfaces seemed to keep her injury free and allowed her to begin posting some impressive results.

In 2017, she won the USA Track & Field half-marathon trail championship, and then grabbed the win at the 30K trail championship in 2018. Now, she’s preparing for February’s U.S. Olympic trials to fight for a slot on the U.S. marathon team after dropping a scorching 2:40:19 qualifying time in the 2017 California International Marathon.

“I run both roads and trails, and the Olympic Trials are next up, so that’s my focus now,” she said. “But I generally prefer softer surfaces for running.”

Brasovan said even when she is training for road races like traditional marathons, she tries to get off pavement. “I think it is important to cross-train in different aspects of the sport. I really like to mix up terrain. During the summer I like to get up high, above 10,000 feet, and run trails. But I live in Colorado – we just got 20 inches of snow (late November) – so I have to do a lot of training on roads in winter.”

Given that stress fractures and other impact-caused injuries hampered her performance during her early running career, it is understandable that Brasovan prefers running on the softer surfaces of trails. But she also simply likes the aesthetics and peace of trail running.

In Colorado, we pre-game afternoon weddings with 14ers! A little adventure (and round trip FKT) up Mt. Yale before celebrating @terrabear44’s and Nick’s wedding tonight ? . Also definitely got called out a few times for wearing shorts up top when it was 32 degrees…. . . . #coloradolife #mountyale #14ersofcolorado #pushpeaks #hokaoneone #mountainrunner #mountains #trails #trailrunning #runnersofinstagram

“It’s just a calmer, more enjoyable environment to run in. Mixing up the terrain I use, and the surfaces I run on, has helped me stay healthy,” she noted.

Brasovan says she has also benefited from the extra-thick running shoes provided by her sponsor. Brasovan’s go-to trail running shoe is a HOKA Torrent that she says provides extra cushioning for her injury-prone feet and legs, without being heavy or cumbersome.

“I love the Torrent – I’ve been running on these in training and in races for about 18 months and they are exceptional,” Brasovan says. “They were a little lower in cushion than some of the other models and I like that in races, but there is definitely still plenty of mid-sole foam to provide protection and support on those rocky, technical routes.”

We all have a story. I have shared mine many times, in bits and pieces. In my latest conversation with @runnersworldmag and @haileyharper7, I was asked about my path to next year’s 2020 Olympic Marathon trials. For me, that [VERY non-linear] path links all the way back to high school. . My journey started early on at the age of 12 with an eating disorder and urge to constantly train more. This led to a high school career of 7 state titles/3 national titles/26th at Worlds but meant running with an overly thin frame, lots of overtraining, and plenty of under-eating. In the fall of 2009, I decided to continue my running career in college at Duke University. . I thought college was where big(ger) things would happen, but life had other plans for me. My college career started with a diagnosis of severe osteoporosis at the age of 18, very little running for 2.5 years, 4+ stress fractures, and multiple doctors telling me that I would never run competitively again. . Fast forward to today and my reunion with competitive running. My bone density is finally back to a normal range. I still have managed to train/compete at a high level and qualify for the 2016 and 2020 Olympic Trials off of a minimal 4-5 days of running per week. However with 2 stress fractures in the last 12 months, I know this battle isn’t over yet. . As I shared my story with @runnersworldmag and the running community, I wanted to believe that my path to the 2020 OTQ is unique. However, I know that many others suffer from similar issues. . So I share my story to help create awareness. I share my story for inspiration to those going through a rough patch. But I mostly share my story to hopefully help others avoid this path. Under-fueling and overtraining can do PERMANENT damage to your body and is NOT worth it in the long run (no pun intended ?). . Sorry for the long post but you can check out the (even longer) story from @runnersworldmag and @haileyharper7 through the ♾ in bio! . . ?: @cirqueseries . . #runnersworld #runner #runnersofinstagram #mountainrunning #trailrunning #injuries

For pure road running, Brasovan opts for HOKA’s snappier Evo Carbon Rocket shoe. This racing shoe is less plush than other HOKA shoes, but to compensate for that, a carbon sheet sits under the midsole foam to provide extra protection underfoot.

“The Carbon Rocket is a great road racing shoe. It is light, but also provides great support and protection. I’m very aware of potential injury issues, but these shoes give me a lot of confidence during events.”

She said it’s remarkable that one brand can provide the shoes she wears in training and in racing – both on trails and on roads.

My life philosophy? If Plan “A” doesn’t work out, then there are 25 letters left in the alphabet to keep trying. I don’t give up in anything – and that is not just limited to running. If you have some time this week, check out my conversation with Rob on the @trainingforultra podcast where we cover a WIDE variety of topics over the span of 60 minutes including my longevity and persistence in the sport, the mental side of running, mental toughness, my transition to the sub-ultra and many other topics. . . Also this is my first podcast interview ever!! Let me know your feedback/thoughts/comments ? . ?: @xterraoffroad #TimetoFly #trainingforultra #hokaoneone #SWAPteam #runnersofinstagram #trailrunning #50k #runner #HShive #runnershighherbal #nuunlife

“One thing I really love about HOKA is that they excel in making shoes for both road and trail. I don’t know any other brand that is at the top of the game in both sides of the sport,” she said. When out on trail runs, Brasovan said she tends to use a simple generic hydration reservoir in a slim runners’ vest, such as the Nathan VaporHowe race vests. “I like Nathan in part because they fit – I’m very petite at just 5 feet tall with a short torso – so­ good adjustability is vital,” she said. “Functionality is important, but fit is vital – it needs to first stay on, then it has to perform as I need it to.”

Brasovan noted that she likes the race-vest option much better than handheld bottles, even though the bottle might be lighter than a full reservoir system. “I really like to keep my hands free, especially on trails. You just never know when you’ll need to reach out to steady yourself.”

Today I lined up with zero expectations and with the simple goal of checking in on my current fitness. I have had two femoral stress fractures in the last year and have only been running 5 days a week since May (swimming or off the other 2 days). To be honest, I had a relatively low bar for myself and my fitness this morning. . However, I still ran with the belief that I don’t need to run high mileage to be “good.” I ran with the belief that being smart and being patient CAN be enough coming back from multiple injuries. And you know what? That belief turned into reality. . Smiling every step of the way (per Coach David’s advice), I became the first female to win an overall @xterraplanet trail race at the 20k distance which is also #progress towards equality in the sport. . #xterraoffroad #xterratrailrunning #hokaoneone #trailrunner #mountainrunning #runner #runnersofinstagram #timetofly #xterra #beavercreek

She says she has several reservoirs options and doesn’t favor any one brand over another. “I pick them for size more than anything.” She says she just finds the smallest reservoir she can get away with for the conditions and training plans.

Brasovan said there’s not much other gear she regularly carries on runs. “I don’t need a lot when on a long training run.” She carries some energy gels for fuel but foregoes solid food for the most part during runs.

Outside of running, Brasovan mixes it up as well. She does swimming for cross training and isn’t so focused on training that she can’t get in a good hike or go skiing to enjoy herself. “I’m in Colorado, and I enjoy all this area has to offer.”

Confidence isn’t grown overnight and can disappear just as quickly as you build it. It takes time, patience, hard work, and sometimes just focusing a little bit more on you (I.e. – putting a break on social media). Over the past few years, I’ve learned a few tricks and tips for building self confidence and translating that into race performance – especially when coming back from injury. . . Check out my latest article on the American Trail Running Association website to learn a little bit more about investing in yourself and improving your confidence in 2019 [link in bio]. ?? . . . @atratrailrunner #runstrong #americantrailrunningassociation #trailrunning #runnersofinstagram #comebacks #mountainrunning #hokaoneone #nuunelite #HShive #confidence