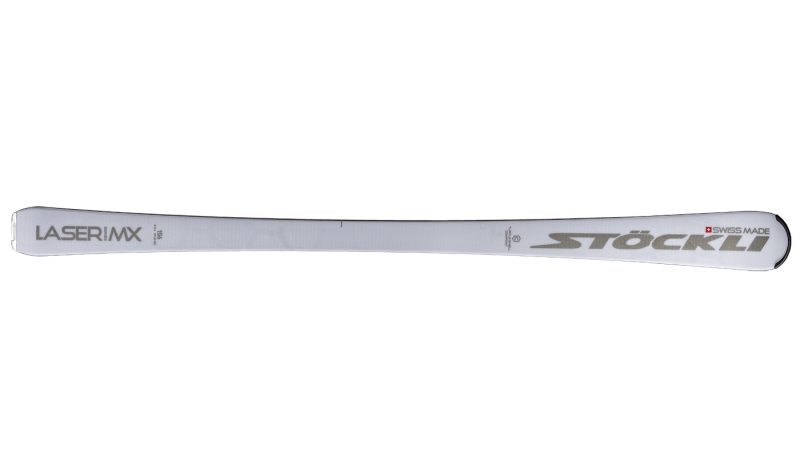 THE VERDICT
The Stöckli Laser MX was designed with the help of a decorated female ski racer. The result? A ski that can make laser-fast slalom turns when skied aggressively. “An espresso in the form of a ski,” says one tester. “Crazy energetic.” Testers gave the 65-mm-waisted top marks for Responsiveness, followed by high marks for Edge-hold and Carving Pleasure. The Laser MX’s lowest marks were for Turn Shape Variability. “This is a one-trick pony,” says one tester. “It excels in short-radius turns only.”

An energetic turner, the Stöckli Laser MX can make laser-fast slalom turns when skied aggressively. “An espresso in the form of a ski,” says one tester. “Crazy energetic.” Testers gave theLaser MX, with its 65-mm waist,  top marks for Responsiveness, followed by high marks for Edge-hold and Carving Pleasure. The Laser MX’s lowest marks were for Turn Shape Variability. “This is a one-trick pony,” says one tester. “It excels in short-radius turns only.”

Stöckli has been manufacturing skis since 1935 and is currently the only ski manufacturing company left in Switzerland. For years the company specialized in making race skis, and indeed it still has a strong race presence. In fact, the Laser MX was developed with the help of Tina Maze, the most successful Slovenian ski racer in history.

The Laser line is considered Stöckli’s racing line, however, the Laser MX is targeted toward female all-mountain skiers. Chalk it up to a different connotation of all-mountain vs. carving between the two ski worlds of North America (where wider waists are commonplace) and Europe (where narrow, race-inspired recreational skis still populate the slopes). That said, testers made multiple references to the slalom-type turns that the Laser MX seems primed to make. Some testers felt that ex-racers or beer league skiers would get the most out of this race-inspired ski, however, other testers felt that it could accommodate intermediate skiers as well, thanks to the turn-happy sidecut and voluminous tip shape. All in all, testers agree: “This ski is for those who want to maximize their vertical with tons of turns.”

According to Stöckli, the Laser MX is the first Laser model designed specifically for women. It features a sandwich sidewall layup, with a Light Core made from balsa and fuma wood, used for their high strength-to-weight ratio. Turtle Shell Comfort Technology helps with energy and stability. The Titanal layer has notches that lock when speed and force are applied, adding stability, or remain unlocked at slower speeds for an easier flex. The ski has a wide tip (119 mm, relative to the 65 mm waist and 100 mm tail). Stöckli’s Flex Curve refers to the shape, or sidecut, designed for easy handling and short turns. On that point, testers agree. “These are gas-pedal slalom skis, period,” says one tester.

Aside from lower marks in Turn Shape Variability (referred by one tester as “a one-trick pony”), some testers felt that the tail held on too much in long turns. “Don’t expect this ski to perform well straightaways,” says one tester. “It wants to turn and not track straight.” One tester felt that the ski could be pushed into longer radius turns with “pressure and coercion,” but that worked against the nature of the ski. Testers skied the Laser MX in a 162 length—which is the longest length available—and some testers felt that length was too short. “This ski is tiny but fierce,” says one tester. All in all, the Laser MX is a focused short-turner and does its one intended job very well.

The Stöckli Laser MX received top scores across the board for Responsiveness from all testers, who described the ski in the following way: “gas pedal skis,” “an espresso in the form of a ski” and “crazy energetic.” Responsiveness comes from the race-inspired design, which includes a sandwich sidewall and a light wood core. The specs of the Laser MX equal slalom turns including a 65 mm waist and a tight turn radius of 12.4 m at 162 cm.

Testers gave the Laser MX high scores for Stability, however, Stability in short turns. Once engaged in long turns, testers felt that the tail hooked up and held on. Turtle Shell Comfort Technology, though a confusing name, actually helps with the energy and stability. The Titanal layer has notches that lock when speed and force are applied, adding stability, or remain unlocked at slower speeds for an easier flex.

Testers gave the Laser MX strong scores for Edge-hold, particularly in short turns. Stöckli says the edges are called Solid Metal Edge Light and isn’t as thickly built into the ski as other models. Thick or not, testers still applauded the ski’s grip and hold on hardpack. “Fierce edge-hold,” says one tester. “This ski can make lightning-fast edge changes,” says another.

“This ski feels like a beer league slalom ski—but skip the beer because turn addicts should make hundreds of turns per run,” says one tester of the Laser MX. Ski testers had fun making short turns down the groomers of Snowbird with this 65-mm-waisted ski and scored it high for Carving Pleasure. The caveat: The Laser MX excels in short turns. “This ski doesn’t perform as well in longer, GS turns,” says one tester.

“This is a one-trick pony,” says one tester of the Laser MX. “It excels in short-radius turns only.” Testers gave only average scores for this category because the ski is so specifically designed for short turns. Testers felt that the tail held on in long turns and the ski didn’t track straight on catwalks. All in all, the ski makes short turns extremely well, and the ideal skier is one who loves to carve on a ski that’s quick edge-to-edge, stable yet energetic underfoot. 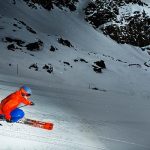