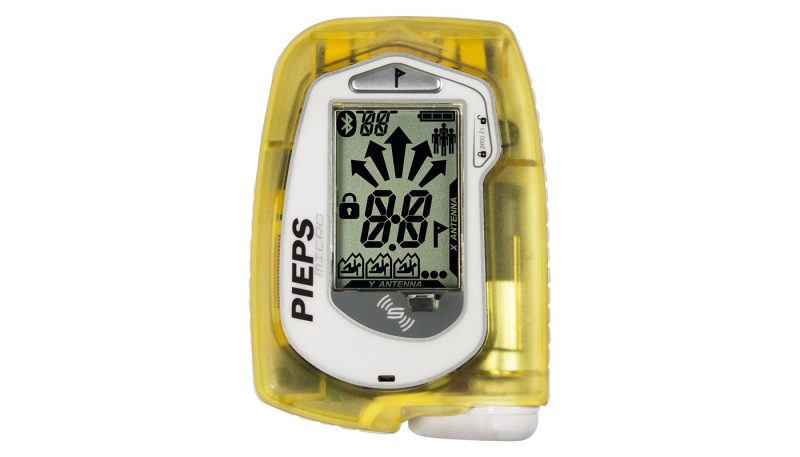 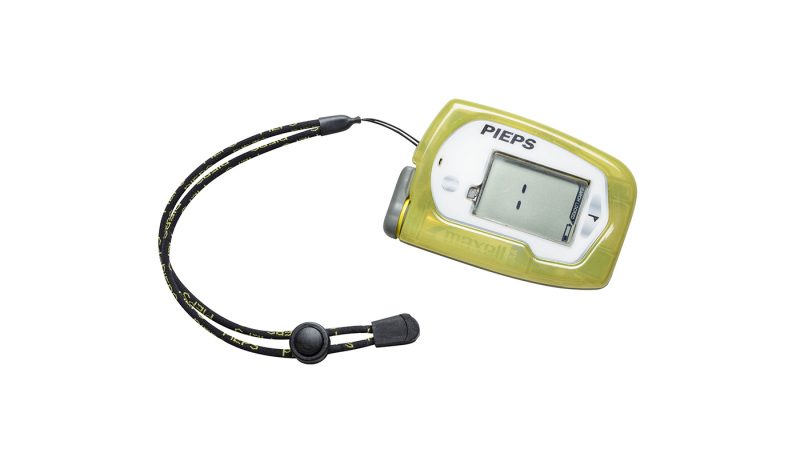 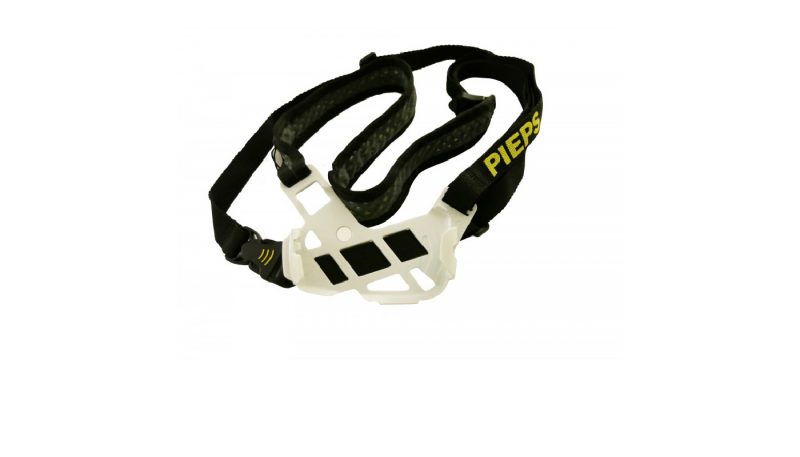 THE VERDICT
The Pieps Micro is the latest incarnation of Piep’s reliable, easy to use avalanche beacon technology that reduces size and weight with the added “convenience” of automatic switching between transmitting and receiving modes based on a light-sensitive switch. The range is a solid 50 meters and it discerns multiple victims without getting flustered. It has advanced features available, activated via Bluetooth and a Pieps app on your mobile phone. Try as I might I couldn’t find a flaw with the automatic send/search switch but it makes my mind bristle with indignation at the lack of manual control.

The Pieps Micro beacon helps you shave a few grams of weight on your avalanche insurance plan with the same basic range and search algorithms as their older DSP models. It switches between send or receive modes “automatically” based on the light detected.

The slightly smaller size of the Micro has zero effect on its maximum range, and like other Pieps beacons, has a circular receive pattern, meaning it receives the signal at least 50 meters away no matter whether the main antenna is parallel with the victims or crossways. The only reason you might get less range is if the victim’s beacon is aligned vertically while you’re searching in the horizontal plane. Even then my tests indicate a 29-meter range which is still respectable for the worst-case range.  While other brands might detect a signal further away, it is often a momentary blip until they get closer. Pieps beacons tend to lock on as soon as they detect a signal, usually 50m away.

While the light-sensitive mode switch and Bluetooth connectivity have my Luddite radar on high alert, I cannot deny the appeal of the Micro’s lighter weight–a mere 150 grams thanks to a single AA battery power source. Despite the smaller size, the display screen is larger than earlier model Pieps beacons, and one of the easiest to read screens in reflective conditions. In low light, it is backlit.

The harness is simple and obvious how it straps around your torso. The holder for the beacon is a molded plastic frame that the Micro clips into that orients the screen against your body for protection. For those who prefer to carry the beacon in a pocket, it comes with a leash for clipping to a belt and a pouch to ensure the sensor is covered when not searching.

There is only one function button, above the display, and one knob in the bottom right corner for turning the beacon on or off.  There are advanced functions possible with the Pieps Micro, but those can only be modified via the Bluetooth connection and a Pieps app on your smartphone. This is also how the operating software can be upgraded.

Perhaps the oddest thing with the Micro is the procedure for turning it on. Powering it up is simple, but inflexible. With the beacon out of its harness and the sensor uncovered, twist the white knob on the bottom right corner clockwise and it quickly runs through a self-test sequence. Within a second it will 1) light up the direction arrows in a sweeping pattern, 2) indicate the software version, and 3) let you know if all systems are good by displaying “OK.”  If you turn on the power with the light sensor covered you’ll get an error (E7), so keep it UNcovered until you see the OK displayed.

Immediately after that, it begins a three-second countdown before switching to send mode. During this three second period you should either: snap it into its dedicated harness, stow it in your pocket, or activate the group check mode (more on that below).

As it begins sending it will vibrate five times and show an X pattern on the LCD screen that pulses on and off. There is also a yellow light in the upper R corner that will flash approximately once a second when the beacon is actively transmitting a 457 kHz signal.

All this is rather intuitive, and the self-check is so fast you will miss it if you aren’t watching. In addition, the Micro indicates the relative battery power left with a simple icon in the upper right corner.

An invisible attribute is Pieps smart antenna technology. By default, the antenna along the long X-axis will be the transmitting antenna. However, if the Micro senses interference with the emitted signal due to nearby metal (your shovel) or other electronic devices (your phone or walkie-talkie) it may switch to the other, Y-axis antenna. Which one is active will be indicated on the display with a long bar on the R side (X-antenna) or bottom (Y-antenna).

The basic group check function can be enabled by holding down the flag/function button above the LCD display during a short 3-second period after the OK is displayed on power-up. The basic group check function reduces the range to allow you to check the reception of each member’s beacon in your backcountry group. In Pro mode, the Micro can also indicate if a beacon doesn’t meet transmitting standards – usually when the frequency is out of spec.

To switch to receive, remove it from the harness, or your pocket, and the presence of light will automatically switch it to receive mode.

One of the things that always seems to mess up a beacon search, whether a real or practice scenario, is the tendency for at least one of the searchers in a group to not switch their beacon to search mode. Pieps Micro effectively eliminates that potential oversight. At first, I was a bit skeptical of it but have to admit the logic of it is undeniably simple and I can’t think of a situation where it might fail except maybe skiing avy terrain under a full moon.

Once the Micro detects a signal it’s just a matter of following the arrows in the direction they indicate, taking care to make sure the numbers are declining. The Micro maintains Pieps trademark steady response with very little “bounce” in direction or distance. Throughout its range I found the numbers to be quite accurate.

Once the Micro locks on to a signal it beeps once every period, in time with the display update until you’re inside of five meters. From five to three, it does a double-beep, a triple-beep from three to two meters, and a quadruple-beep inside of two meters. I like the cadence change but wish it were louder overall, and/or became louder as it gets closer.

In the critical fine search phase, the accuracy was great even when doing a grid-search to narrow down where to begin probing for an actual strike provided I wasn’t moving more than a few feet between beeps. If I moved, say, a meter between beeps I would need to pause for a second beep for the number to settle. This is typical of most digital avalanche beacons, arguably better than most since waiting a third pulse rarely resulted in further distance refinement. With practice, you might be faster with a real-time analog tone, but with practice, the Micro wouldn’t be a disadvantage either.

Although it varied with each test due to the inevitable potential for signal overlap, the Micro usually picked up a second signal approximately 30 meters away, and a third generally in the 20-meter range. It consistently homed in on the strongest signal first and with rare exceptions, was not distracted by secondary signals except when there was an overlap in signal timing. Even then the interruption was momentary, allowing me to continue with locating the first signal easily.

To mark a found signal, press the flag button above the screen momentarily. No need to hold it down, a quick push and it will mark that signal, subsequently ignore it, and then quickly point in the direction of the next strongest signal.

The Micro accurately recognized how many signals there were, although when one of the three was an outdated analog beacon it would occasionally think there were only two instead of three. This is common with all digital beacons since older analog beacons have long pulses that are more likely to create such an overlap. While the Micro has the ability to indicate when one of the signals is an older, “dirty” common-carrier signal, apparently my old F1 is relatively “clean.”

There are a few options available for the Micro if you turn on Pro Mode. This can only be done by downloading the Pieps app on your smartphone and then connecting to the Micro via Bluetooth. Via the phone app, you can change the time on the Auto-Revert to Send function, enhance Group Check capabilities, change the battery type from Alkaline or Lithium, and toggle the vibration function on or off.  If you want to know more about those, Pieps lets you download a detailed manual in six languages, and has a few instructive videos on their website.

If you need to upgrade your older digital beacon you can hardly go wrong with Pieps Micro. It has great range, great accuracy, and makes multiple victim scenarios relatively easy to deal with. It’s also lightweight and reasonably priced. 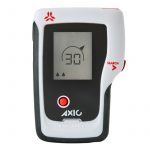