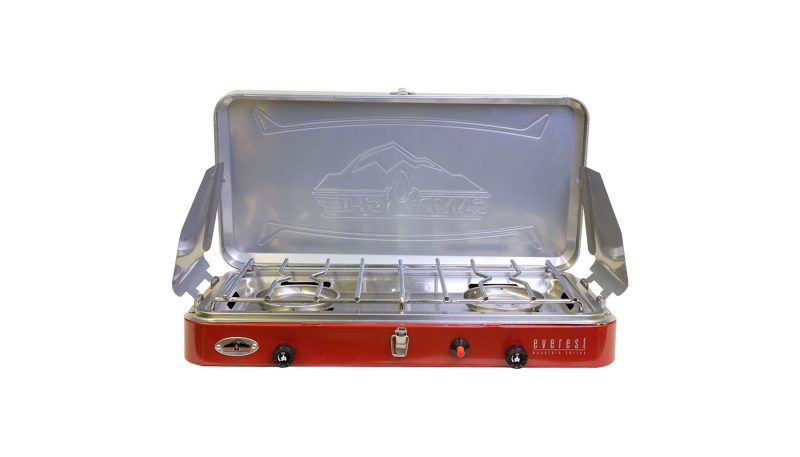 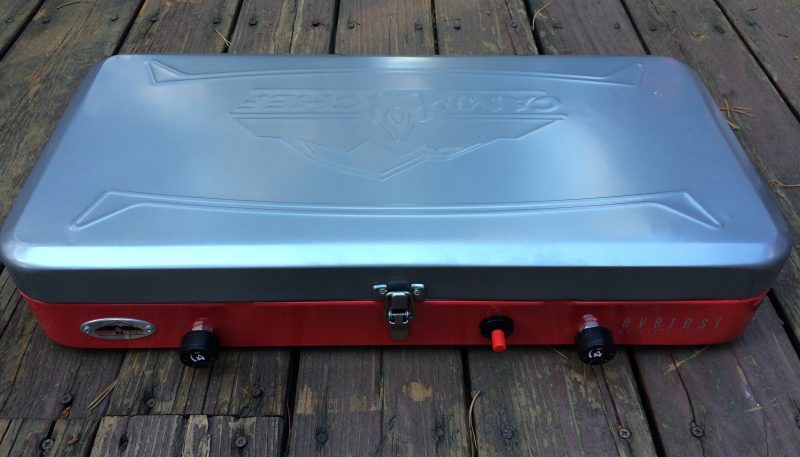 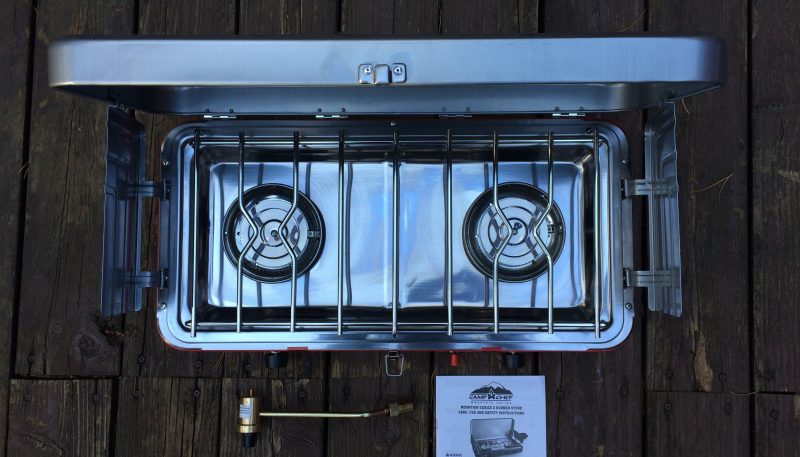 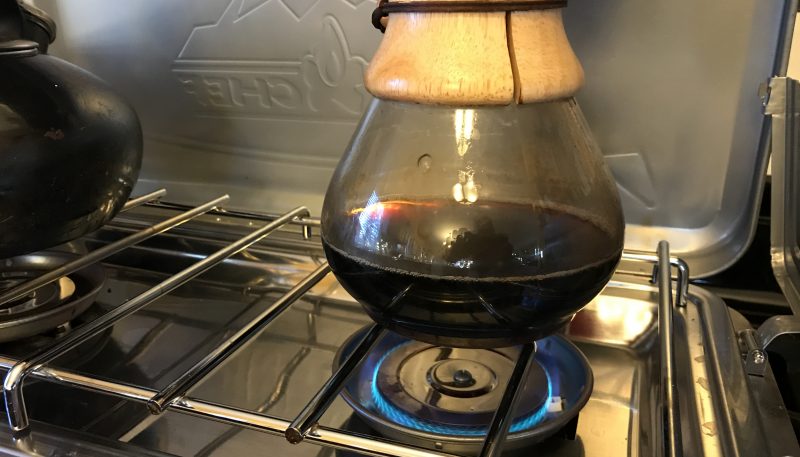 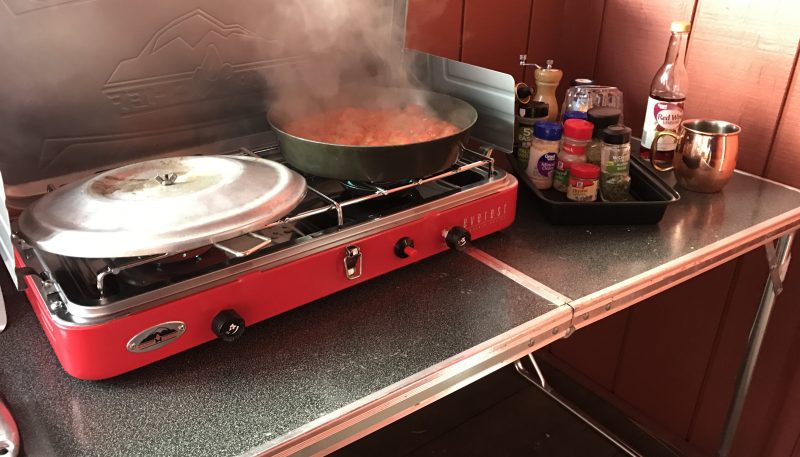 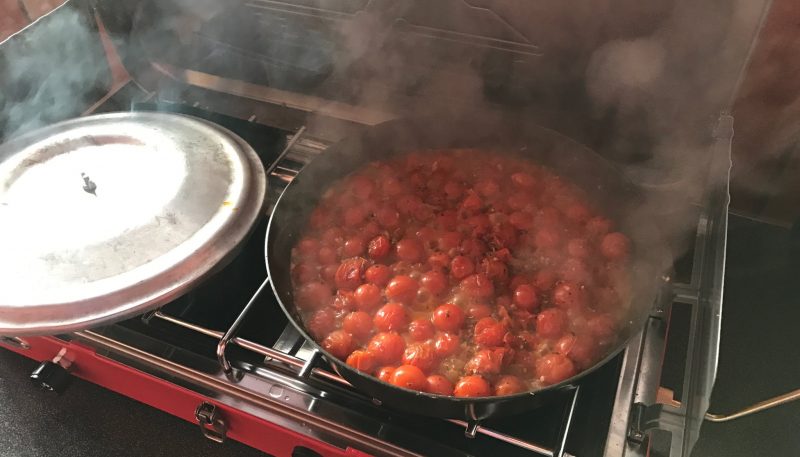 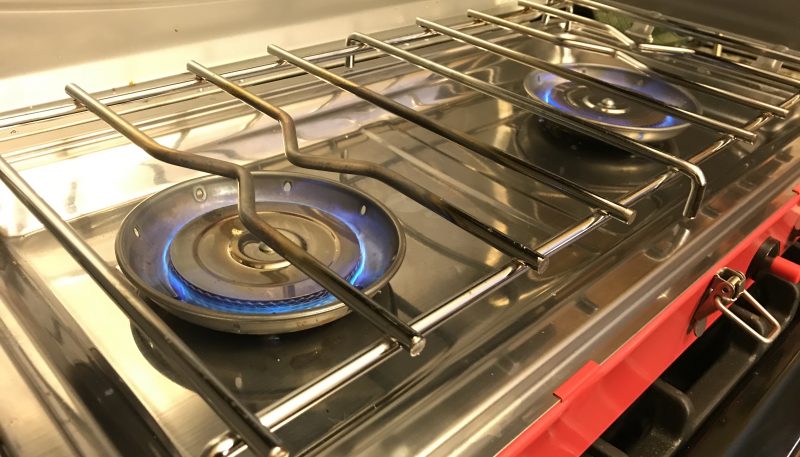 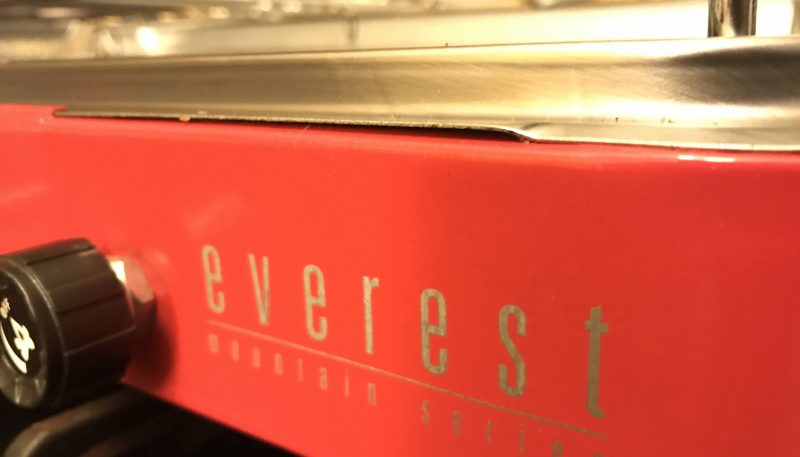 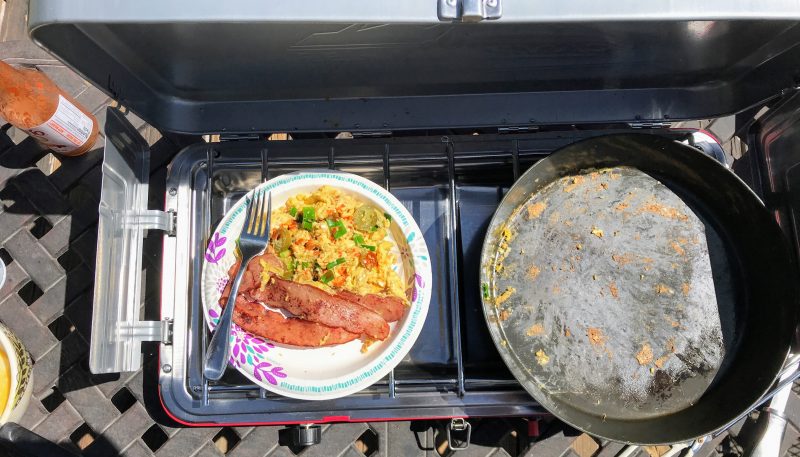 THE VERDICT
The Camp Chef Everest is the stove you buy to keep in your camper or truck kitchen, where it can accumulate crumbs in its hinges, color on its grates, stickers, and a few dents. Not only is it the most affordable stove in the test, it’s the closest to your “Father’s Camp Stove” we found. Its simplicity and bulk can run contrary to today’s nimble, sleep-anywhere-on-a-whim road-tripper, but that’s not the market a company called Camp Chef is after. I’m not a fan of how the fuel line coupling mates with the stove’s fuel line, but until manufacturers find a way to make a better system, like the Kovea Slim Twin’s, more ubiquitous, we’re all stuck with screwing around with it for a minute until it catches safely and we can cook. The Everest will also likely take up the entire end of a picnic table, so expect the propane to dangle in space and to keep cookware and ingredients on the seat or behind it. However, it’s ideal for a truck tailgate and multi-table kitchen set-ups, and overall, an affordable, family-ready camping stove.
FULL REVIEW

The Camp Chef Everest was the most powerful two burner camp stove in the test. Blasting up to 20,000 BTUs per burner, there’s little doubt this stove won’t get the job done when there’s need for something hot. All that power is held in check with a wide range of flame control and excellent all-round wind protection. It doesn’t simmer as well as the Primus Tupike, but its massive burner heads did their job cooking frozen pulled pork, steaming refrigerated breakfast burritos, and simmering homemade tomato sauce.

The broad, larger than average, 5-inch diameter burner heads provide a steady, wide flame that spreads heat nicely across most common forms of camp cookware. The stainless steel grate stretches the length of the stove to support heavy pots and pans which, in addition to the wide burner heads, allowed use of a full-size steam table pan to warm breakfast burritos for a group of hungry veterans in Yosemite Valley. The flame control knobs, notched and 1 inch wide, are easy to manipulate and there’s minimal drag between adjustment and flame response. While overall simmering is good, the flame loses some consistency at mid-level.

The aluminum lid on the Everest bent slightly during testing after a relatively minor—but accidental—drop. However, all four hinges remained unaffected and attaching it to the folding windshields rendered the damage invisible when in use. I was surprised it tweaked that easily. Given its wide surface area and thin make-up, the lid is the stove’s most vulnerable component.

The rigid steel cooking grate is supported in three places when in use, allowing it to hold a considerable amount of cookware. The Everest is essentially an enclosed (albeit hollow) aluminum box with a couple of burners in it, making it “feel” physically up to the task of cooking for your overland expeditions. So yes, it can handle some rough housing, but don’t sit on it, or consider it a flat surface on which to place a heavy cooler when packed in the truck.

At 12 pounds, the Everest is the heaviest and largest stove in the test. When closed and locked-up via a strong, spring-loaded front clip, the stove is carried by an internal handle cut into the frame, under the front center. It’s plenty comfortable, simple, and has no additional moving parts. The grill jostles a bit, as do the wind shields resting on it; and the detachable regulator will also slide around when enclosed between the grease pan and the grate. The metal-on-metal rattling is annoying, especially when bouncing down washboard roads. However, a bit of duct tape, louder music or a lowered car window to add ambient noise, fixes what is really a minor issue.

At 13.5’’ x 23.5’’ x 4’’, the Everest’s footprint is meaty when compared to the others in the test, especially the Jetboil Genesis. The Kovea Skim Twin is about half the Everest’s height. It’s also heavy enough to become a concern during sudden stops when heading to the campsite. Pack it accordingly but remember, all this girth does equate to a pretty tough, kid-proof cooking product.

The Camp Chef is the utilitarian workhorse of the test, big on cooking and campsite practicality, and slim on arguments for winning a beauty contest, at least in this test. The stove’s dual, 20,000 BTU burners are the first bullet on the list of reasons to buy, followed by its excellent wind resistance when the rectangular wind screens are notched securely into the upright lid. The stove sits flat on table tops or the ground, and the grill grate legs are inserted in two machined holes in the back of the drip pan, there are no hard attachment mechanisms.

The hefty control knobs offer solid ergonomics, and there’s only one ignitor for both burners. The firm, front latch holds the stove together nicely during transport and the handle underneath helps make the heavier haul easy for any capable adult or excited young campsite helper. Propane is attached via the standard brass screw-on regulator, with the valve train positioned on the lower right side of the Everest. Like plugging in a USB cable, you’ll never cleanly thread it on the first try, which is the nature of this common but antiquated attachment design. Something to consider is the variety of accessories Camp Chef makes available for all of its products. If this is the stove for you, there’s a big family tree of cool stuff to show off at the next reunion.

The Camp Chef is up and cooking in under a minute, if you’re good at threading the regulator. Like with the Jetboil Genesis, there are no legs to unfold, meaning you don’t have to worry about warped table tops disrupting stove balance. Unlatch and lift the lid, push the wind screen tabs through their respective entry points, attach the propane, and go. Cleaning the drip tray is as easy as placing aside the grate and wiping it down. The burners respond quickly to adjustment and even though one igniter starts both, they can be run individually.

When up and cooking, everything feels solid and intact, fused together. There’s nothing that needs adjustment or jostling on the Everest, as Camp Chef has built something meant simply to cook food outdoors, and it’s a promise well kept. 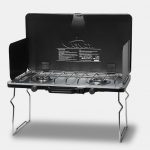