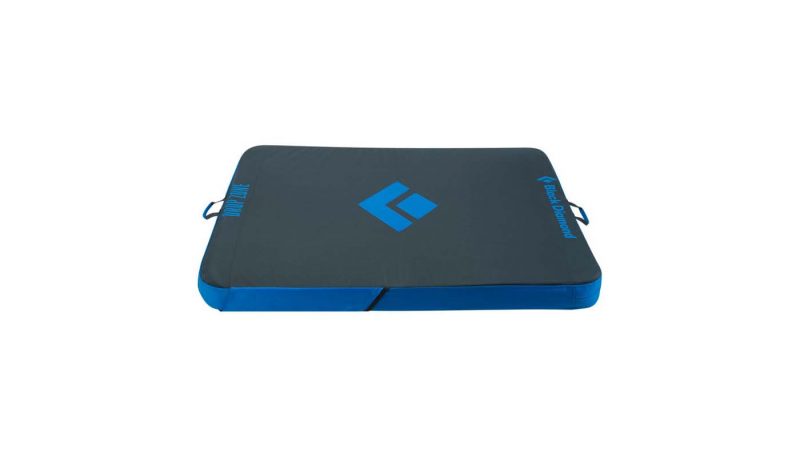 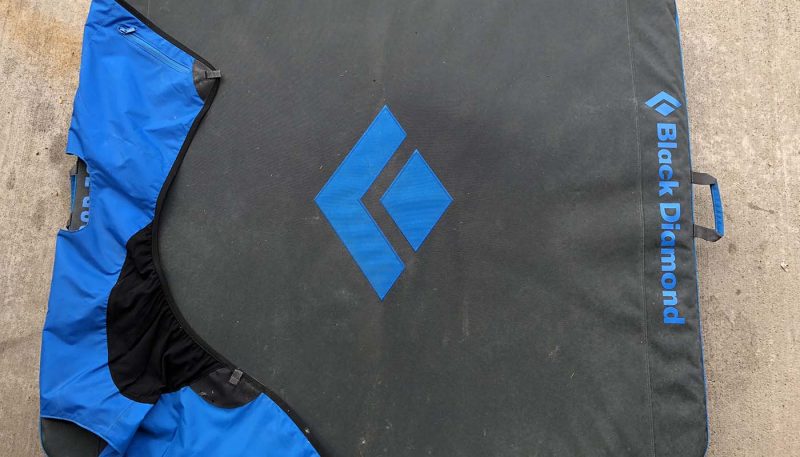 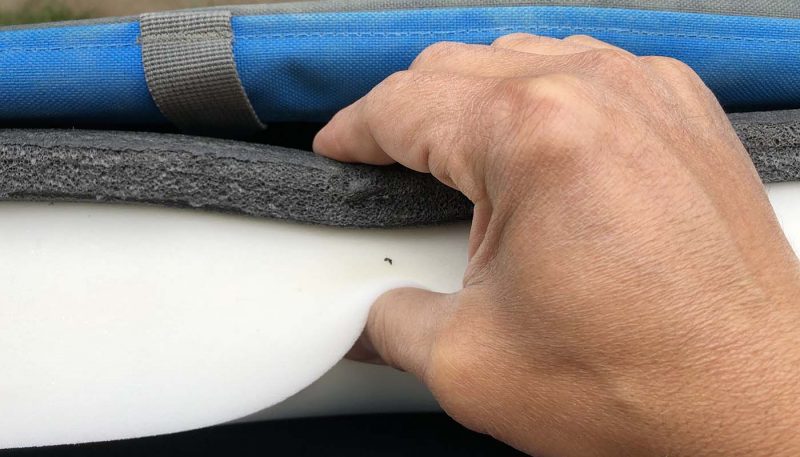 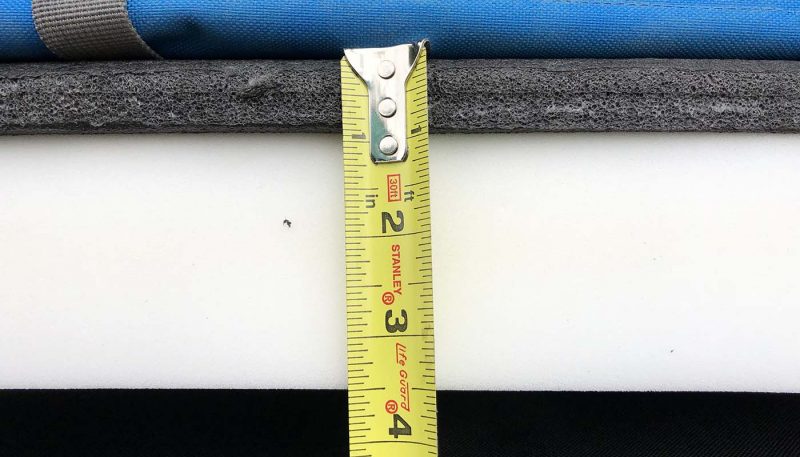 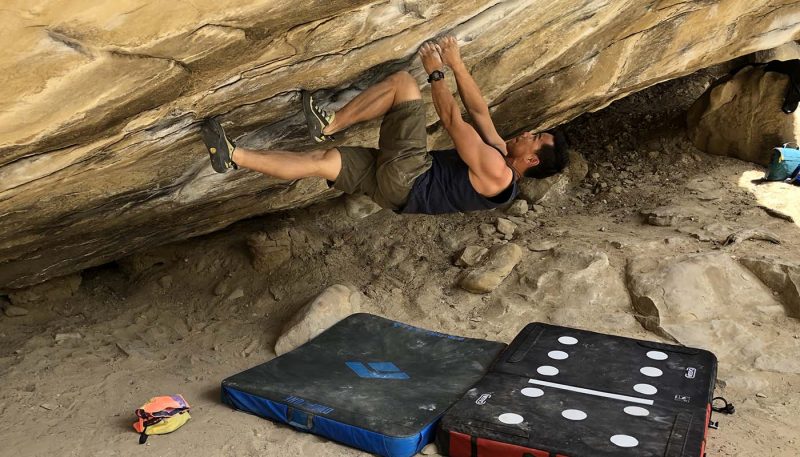 THE VERDICT
The Drop Zone is a lightweight pad making it easy to maneuver even with its larger landing surface. The Drop Zone is the only pad we tested that uses a “taco” style hinge design. This made it easier to pack gear inside and eliminated the dead spot often created by standard hinges. The major downside of the Drop Zone is the foam quality and thickness especially when compared to other pads. The combination of foam is not only too thin allowing climbers to bottom out but it was also too soft for our tester’s preferences.
FULL REVIEW

Black Diamond uses a combination of dense 1-inch polyethylene foam and 2.5 inches of softer high compression polyurethane foam.  Compared to all the other pads tested, we found that the Drop Zone’s foam combination performed below average for landing variability.  It is not only the thinnest pad we tested at 3.5 inches, but it also seemed to be the softest foam and consequently bottomed out most frequently.  Testers noted that both the polyethylene and polyurethane foam could be more firm in order to be better suited for protecting the climber from falls on uneven terrain.  For lounging around or for shorter falls, the Drop Zone pad seemed appropriate for average use and the testers appreciated the soft foam. The Drop Zone also did well protecting obscure landings that were tight in scree fields or had slopes.  However, for longer falls averaging over 6 feet, the Drop Zone needed to be stacked with another pad in order to avoid sharp rocks on uneven landings. In terms of foam quality and experience, the Black Diamond Drop Zone was our tester’s least favorite pad.

The Drop Zone pad uses a 1000 denier nylon for its shell.  This seems to be standard for most of its competitors as well.  However, where Black Diamond differentiates itself from its competitors is in the addition of a “rubberized” polyurethane coating on the back side, somewhat similar to the Kinetik pad we tested.  Testers liked it for its non-slip characteristics that kept it in place better on sloped surfaces than other pads. The rubberized polyurethane coating was also waterproof and “mud-proof” to keep climbers from landing in the wet spring conditions of the Rocky Mountains.  The major downfall of using this design feature is that there is nothing to protect the shoulder straps or waist belt from these wet or muddy conditions. Thus the Drop Zone got lower marks for this oversight from some of our testers. Otherwise, testers found no durability issues with the shell construction.

Our testers found the Black Diamond Drop Zone to be moderately functional. Although they liked the hinge design for its continuous foam sheet, they initially found the hinge to be cumbersome to fold. Over time, the foam seemed to “break in” making it easier to fold and stuff the pad.  The testers liked the continuous foam sheet of the “taco” fold design because it eliminated the dead space in the center found on a lot of hinged pads. The quick closure mesh flap was simple and intuitive to ensure that smaller items like water bottles and climbing shoes would stay inside the pad. However, they found the zippered pocket on the flap was poorly placed right at a bend on the flap making it challenging to use it for anything other than keys.  Testers liked the durable metal buckle for the closure but questioned the durability of the attachment points. The soft foam made it easy to stuff a full backpack inside the pad and have it form fit around the pack. Unlike the Organic or Asana pads we tested, the Drop zone rounded out their corners leaving open spots when the pads were all laid out.

The Black Diamond Drop Zone has padded and contoured shoulder straps that are comfortable for hiking to your favorite backcountry bouldering areas.  The Drop Zone also has a webbing waist belt that was effective in distributing heavy loads from the shoulders to the hips. Although, without any height adjustment for the shoulder straps, the waist belt was mostly useless for our shorter torso testers.  The soft foam of the Drop Zone made it easy to stuff lots of gear into the pad by conforming to the shape of the gear. That said, full backpacks were easier to pack towards the top of the pad making the Drop Zone more top heavy when carrying loads. The quick closure mesh flap is very similar to the Metolius Session pad we tested.  This mesh closure system on the Drop Zone was not as favored by our testers as the Session pad mainly because it was more difficult to maneuver and a much tighter fit.

The Black Diamond Drop Zone is a lightweight pad weighing in just shy of 10 pounds.  With two grab handles on the sides, it makes it easy to toss around at the base of boulders.  Testers remarked that a third grab handle would make it even easier to maneuver on the fly when trying to balance spotting a climber at the same time.  It was noted that with the hinge design, the pad rarely laid flat after it was opened. This made it more difficult to pair up with other pads or to maneuver around as easily as other pads.  The hinge design was also a factor when packing the Drop Zone pad into the back of your car. Because the “taco” hinge design made it more rounded, the Drop Zone didn’t lay flat like other pads, making it more difficult to pack into small cargo spaces. 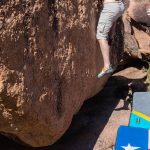 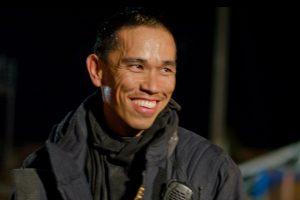