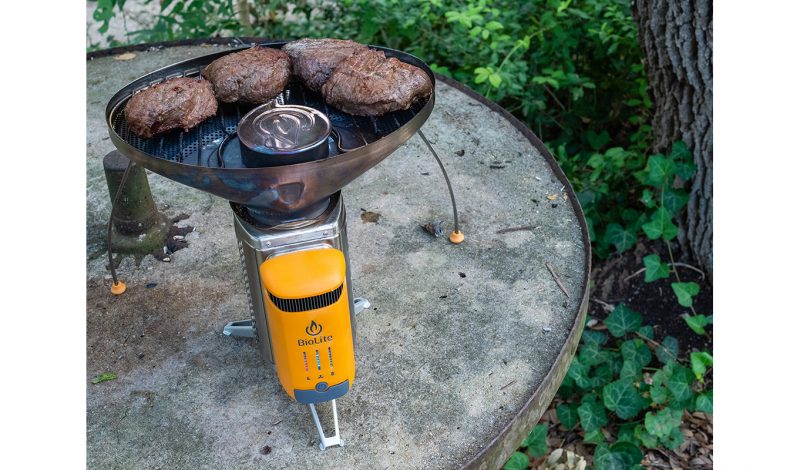 The Camp Stove 2 with the Portable Grill accessory

BioLite states its corporate mission as bringing energy everywhere, achieving this through a business model called Parallel Innovation. BioLite develops technologies that appeal to the outdoor market that simultaneously benefit almost half of the planet that lacks affordable household energy. Bringing this power to areas of energy poverty is funded by sales to the outdoor market, not philanthropy, making these humanitarian efforts sustainable.

Cooking meals over smoky open fires causes over 4 million deaths a year according to the World Health Organization, and 1.2 billion people have no access to electricity, forcing the need to purchase and burn expensive and dirty kerosene lamps for lighting. BioLite created a closed-loop system where a thermoelectric generator creates power for forced air infusion to burn biomass more efficiently with 90% less smoke, while producing electricity that can be used for lighting, charging cellular phones, etc.

We’ve been testing and investigating the BioLite Camp Stove 2 (MSRP $130) to learn how it works as an outdoor stove and how it creates electricity for its combustion system and other uses.

Thermoelectric generators (TEGs) produce electric current without moving parts through the Seebeck effect; this phenomenon produces a voltage difference through a temperature gradient between two dissimilar conductors; the larger the gradient, the more electrical current. In the BioLIte Camp Stove 2, an aluminum probe within the burn chamber serves as the hot side, while a fan-cooled heat sink in the power pack acts as the cool side to form this thermal gradient. The Camp Stove 2’s TEG is claimed to generate up to 3 watts of power.

The solid-state nature of TEGs gives them many advantages in regards to durability, stability, lack of maintenance needs, and the ability to operate in harsh environments, and they have found their way into deep space and deep-sea exploration vehicles. The main disadvantage of these systems is their relative inefficiency when compared to other forms of the electrical current generation.

The Camp Stove 2’s stainless steel burn chamber has 51 total jets in the interior that direct air from an electric fan within the power module. This improved airflow and increased oxygen improves burn efficiency, cuts the amount of wood needed (the stove can also burn wood pellets), and reduces smoke by up to 90% (smoke is unburned fuel particulates). The fan speed is adjustable; more air means a hotter fire and more power generation from the TEG.

The detachable power module contains the fan, heat sink, a 2600 mAh battery, USB port, micro USB port for charging the battery at home, control button, and a LED dashboard indicating fire strength, power output, and fan speed. The power module nestles inside the burn chamber to pack down to about the size of a 32-ounce Nalgene bottle. This module makes up about half of the system weight at a verified 1 pound, .7 ounce while the complete stove is 2 pounds, 2.3 ounces.

The Camp Stove 2 in use

Getting the fire going in the burn chamber was easy with the included fire starter; the fan started automatically when the temperature was high enough, and the effect was obvious. The fire jumped to life, the smoke soon ceased, and adding more wood was in order. The LED dashboard indicated both a stronger flame and the positive charging status of the battery and the fire continued to grow from the added airflow and fuel. After adding wood a few times and adjusting the fan up and down, I got the knack of holding the temperature steady at the ¾ mark on the fire strength indicator.

I used the optional tabletop Portable Grill (MSRP $60) to test the Camp Stove 2’s cooking ability. I was able to cook four 6-ounce sirloin steaks in a manner and time frame similar to my backyard charcoal grill. It took about 30 minutes from striking a match to medium-rare. I started the process with half a charge and ended the cooking with a little bit more of a charge, indicating that the TEG produced more power than the stove used. Smoke was minimal, except for short periods after adding more wood to keep the fire going at the desired level. Due to the small size of the burn chamber, the addition of fuel was necessary while cooking the steaks.

The fire had to be allowed to burn until it extinguished itself, which was hastened by bumping up fan speed initially.

The Camp Stove 2 also comes with an LED flex light that plugs into the USB port for nighttime visibility, and Biolite offers a 1.5-liter KettlePot for MSRP $50. The KettlePot, Portable Grill, and the stove can be purchased together as a bundle for MSRP $200.

The fan is what made this system for me; the additional airflow and oxygen created the hotter burn, more efficient use of wood, and eliminated the smoke. The adjustability of the fan speed also provided temperature control. And what makes the fan unique was the closed-loop nature of the power; the fire’s heat generated the temperature gradient necessary for the TEG to create the electrical current, which powered the fan that generated the heat. The excess electrical energy used or stored in the power pack was a bonus. I would use this as a wood stove even if it didn’t create excess power; the more efficient use of fuel, lack of smoke, and temperature control would be worth it for me.

One can view the BioLite Camp Stove 2’s ability to generate electricity as a novelty. But it’s a wood-burning stove, with self-powered forced-air infusion, that creates an adjustable and almost smokeless flame with less fuel. I appreciated the small opportunity to break the dependency on fossil fuels, and I enjoyed using innovative technology for even the smallest gain. In the end, it was more fun to collect wood, get the fire going, and finally to cook on this fire versus a canister or liquid fuel stove.

The stove is too bulky and heavy for backpacking use, but for it’s great for car camping or basecamp use. Yes, there are much smaller, lighter, and faster options, but the BioLite Camp Stove 2 got the job done in a fun way for casual settings, without fossil fuels, and it did produce usable electrical power. And maybe even more importantly, it gives consumers a rare opportunity to be a part of something bigger while adding to their enjoyment of the outdoors.