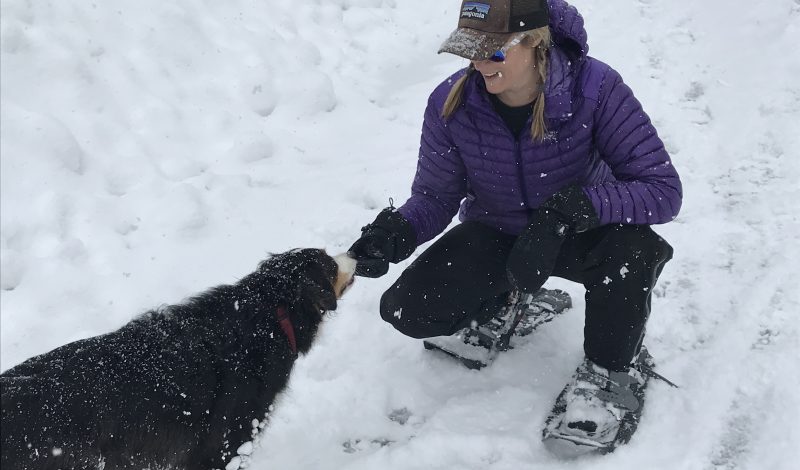 We tested lightweight jackets with year-round application—thick enough for western winter temps into the 20s but not so insulated you can’t wear them as a midlayer or on cold nights year round. They were tested from New England to Lake Tahoe, in rain, dry cold, and white-outs. Our testers took them snowshoeing, skiing, and sledding, and packed them for cold bus rides home and winter business travel. Ultimately, some jackets were loved more than others, but they were all tested with objectivity and a passion for cold weather pursuits.

The good news to come out of this year’s test is that women who spend time outside when its cold have no shortage of highly technical, insulated jackets from which to choose. The only downside is it can be hard to choose, now that even smaller manufacturers, like Cotopaxi and Icebreaker, now have access to the same materials and fabric sophistication as long-time, influential players like LL Bean and Patagonia. 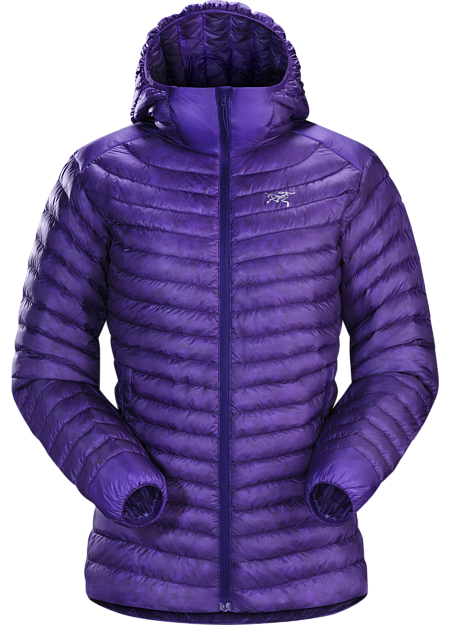 On weight alone, Arc’teryx Cerium SL (which stands for “super light”) was the clear winner, offering a balmy core on average winter days at under 8 ounces. The Cerium SL (super light) Hoody uses 850-fill power grey goose down to insulate and an Arato 7 nylon shell to hold it all in. The natural insulation is partnered with Coreloft synthetic in areas more susceptible to moisture, such as shoulders and upper back.

The shell’s DWR finish is designed to provide strength and water repellency in as lightweight a package as possible. It succeeds in holding off even moderate rain and wet snow for more than enough time to get under something more suited for it.

The drawcord on the hem and insulated StormHood sealed the jacket from top to bottom, and the elastic cuffs withstood a winter and spring of heavy use without stretch. When pushed into more than hour of a March snow in the Sierras, the Cerium SL Hoody stayed dry inside, and even breathed well. 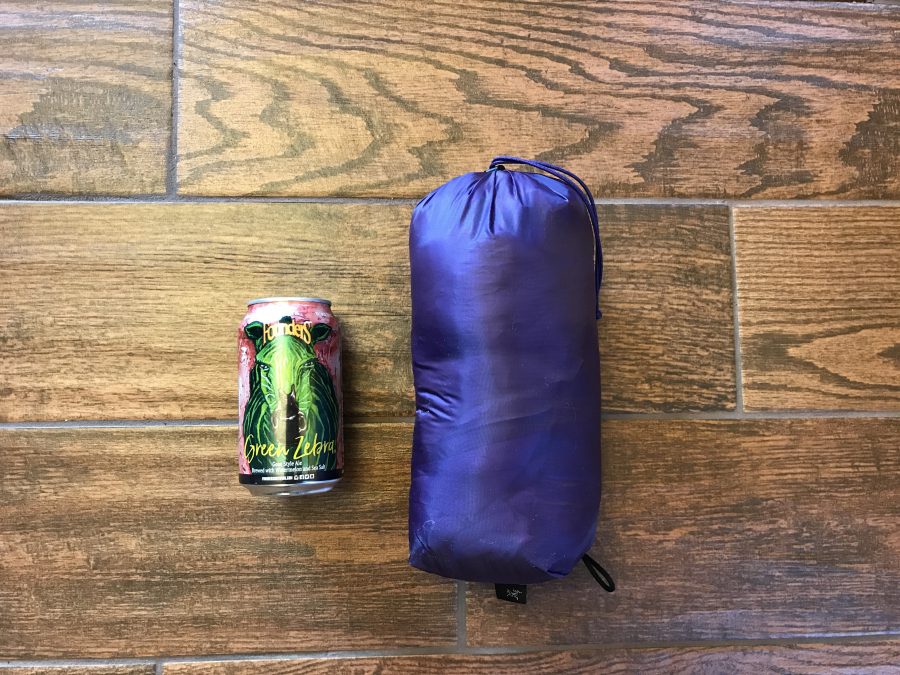 While cold breezes could be felt along the zipper line, the Cerium SL Hoody never wetted out or failed to insulate. One tester stated, “If it wasn’t for a hood bouncing around, or if I could tuck it in, I would do my winter runs in this jacket.”

Another tester felt that the jacket’s fit was flattering on her athletic build, avoiding the bulky nature of most down jackets. The waist fell where it should on a woman, and the breastline never felt restricting when zipped.

Overall, it’s a jacket designed for the absolute minimalist, with two hand warmer pockets, two cinch-pulls on the hem, the hood, and an included stuff sack, into which the jacket disappears in under 30 seconds. Naturally, the coat’s three zippers support the overall minimalist design and contribute to its sub-8 ounce weight. 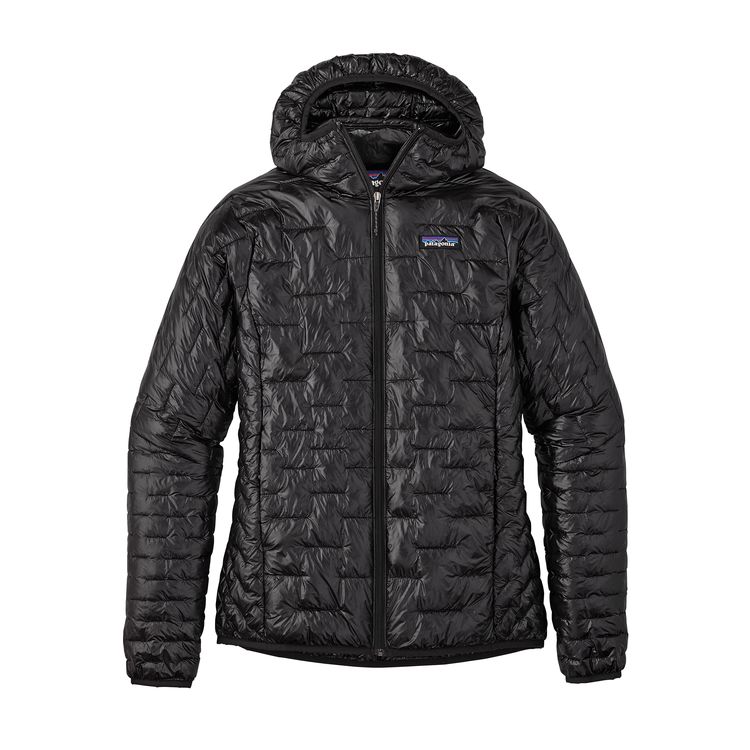 Patagonia’s Micro Puff Hoody represents the company’s most successful effort into balancing warmth and portability. The synthetic PlumaFill insulation is made to repel moisture and stay in place during extended periods of movement, aided in part by the jacket’s patent-pending sewing pattern that limits the number of stitches and minimizes movement of the insulation.

The DWR-coated Pertex Quantum shell is the manufacturer’s lightest and most packable and is surprisingly windproof for something so minimalist. Patagonia designed the Micro Puff Hoody with elasticized hem, hood, and cuffs to help keep the most common places for wind to enter snug against the body, and one tester said it did exactly that on a “… bone chilling, windy walk home from the climbing gym.” Our testers felt the hood was tight, an important note given that it won’t always be under a helmet.

One tester claimed this is the warmest jacket she’s worn, considering its weight. “I am one of the first to complain about how I should have bought a bigger jacket, but this thing is so warm,” she said. Regarding fit, she offered that the size small had just room enough for a thin sweatshirt or flannel, and it fit well under a shell. 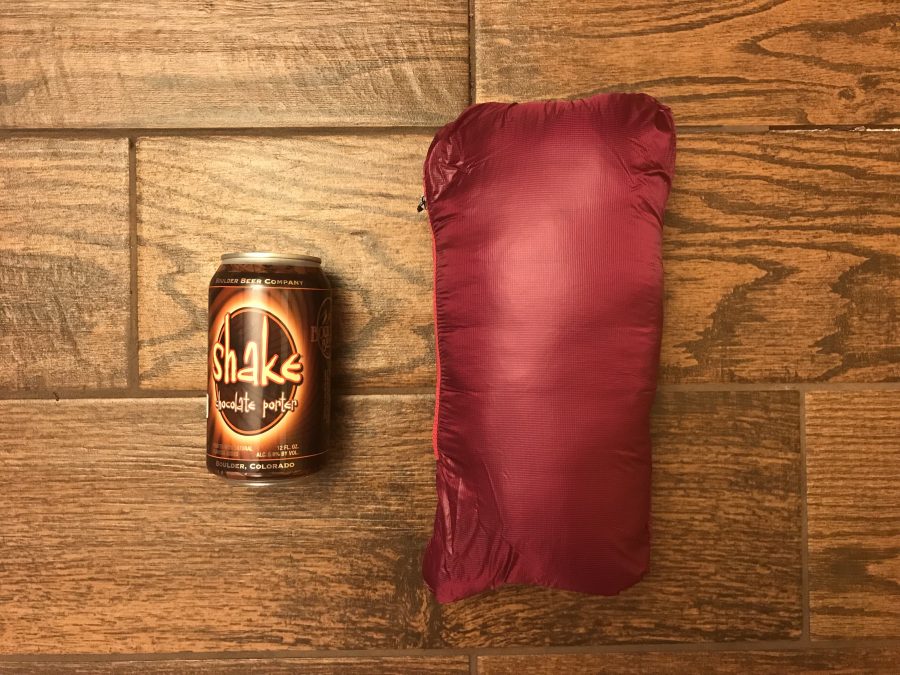 This jacket spares excess features common to others in this test, even the Arc’teryx Cerium SL, which is an ounce lighter. One tester wasn’t a fan of the internal drop pockets, primarily from a “security of contents” perspective, suggesting a nice benefit would be at least one of them having a zipper. 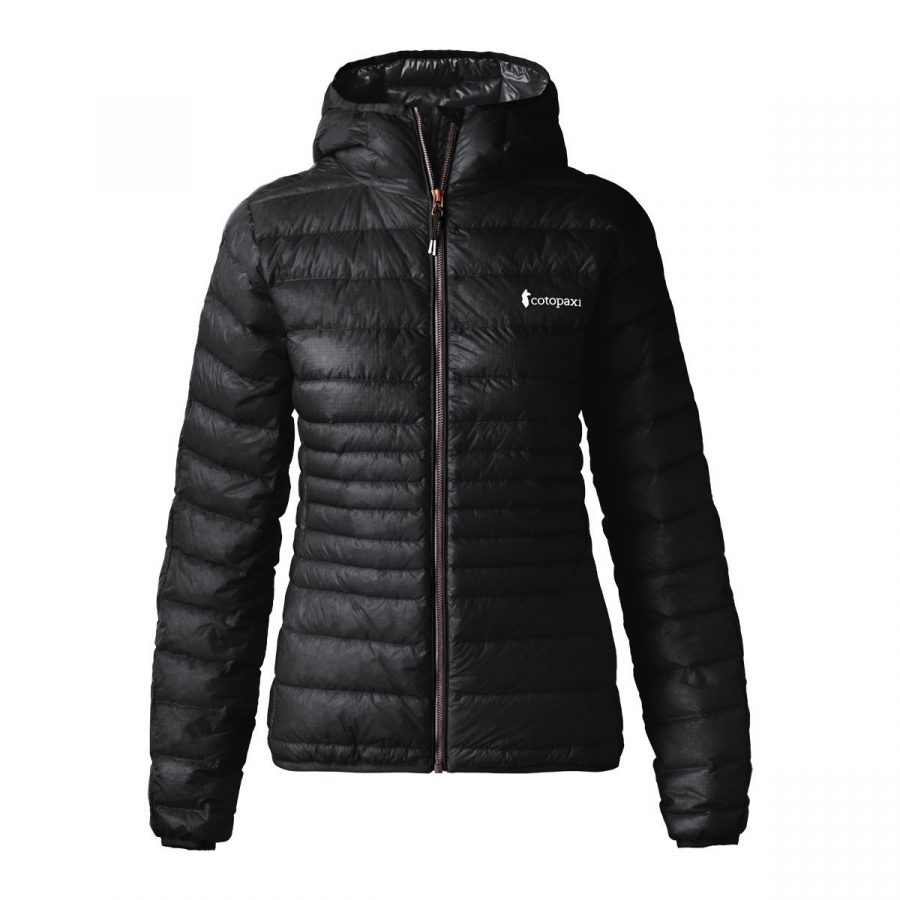 The Fuego Down Jacket is a hybrid insulator combining 800-fill responsibly sourced, water-resistant goose down with Polartec’s Alpha synthetic insulation along its side panels, from the torso to the elbow. In conjunction with the 20-denier giant-ripstop nylon with DWR finish, burlier than most shells in this category, the material choices worked well in creating a moderately weather-resistant, midweight all-purpose coat.

Our testers put the jacket through a range of New England winter conditions, including wet and cold slopes, and it effectively fought off three 2018 Nor’easters while worn during daily activities. The “scuba” hood didn’t quite remain in place when worn alone, and suffered from lack of adjustment. The hem and cuffs are elasticized, and managed to perform as promised without excess wear.

One tester said about the Fuego, “It’s ridiculously warm, so I don’t think I’d wear it in the spring, but I’m all for it in the fall.” She found it was the only layer she needed on warmer winter days, even those mixed with multiple forms of precipitation. While the hood is large, it made for a comfortable sealant against wind and snow when worn over a ski helmet and goggles. The jacket may be a tad much as a midlayer, and the lack of hem adjustments combined with a narrow hip-line led to the coat bunching along the waistline unless pulled down into position. However, one tester claimed that the jacket became more suited to her figure over time. 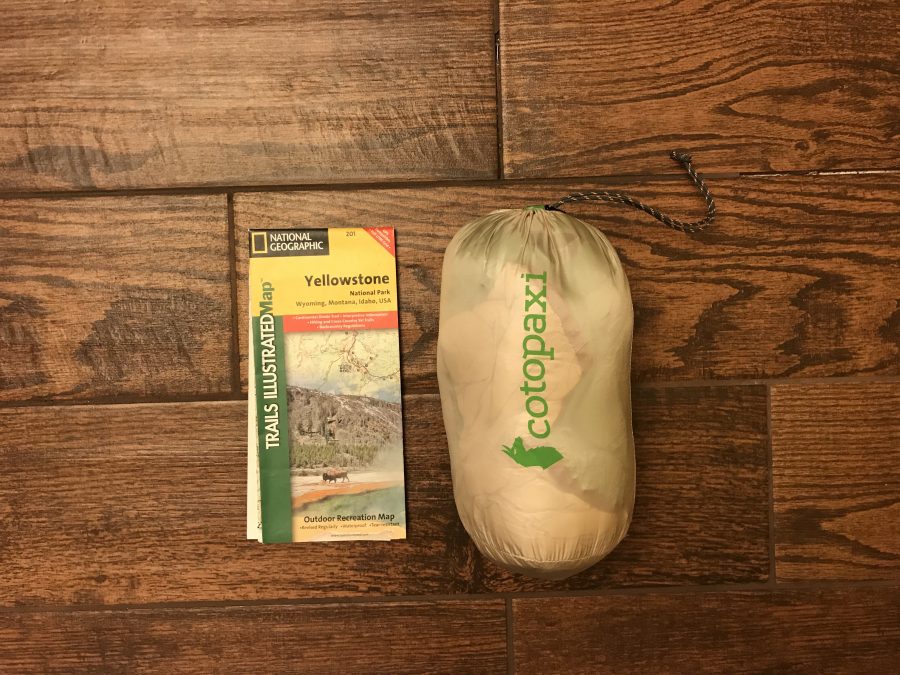 Although it packs easily, the durability of the included stuff sack worried some of our testers. The pocket selection left them pleased with the number of places to stash items, and the zipper’s fat, wind-guard helped prevent breezes from slipping through. 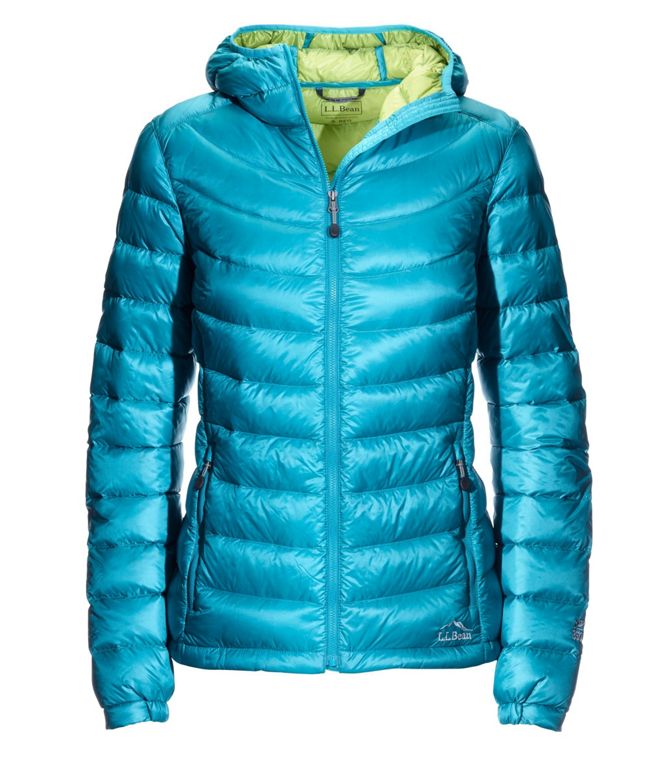 One of our testers said about this jacket, “… it’s the softest and lightest I have worn,” and that it layered very well over a heavy sweatshirt and other bulkier mid-layers. However, at 5’5’’, 120, she remarked that a size small may have been a better fit, but noted that the medium was only slightly roomy under the arms.

In consistent rain, one tester claimed that while the coat did eventually wet-out, its insulating properties remained intact and it dried within 15 minutes of getting back inside.

The hood was a stand-out feature, as it provided an ample rim of protection from incoming moisture and when sealed, held off the cold. That said, 18ºF was about the breaking point of its ability to keep testers warm above minimal baselayers when not active. 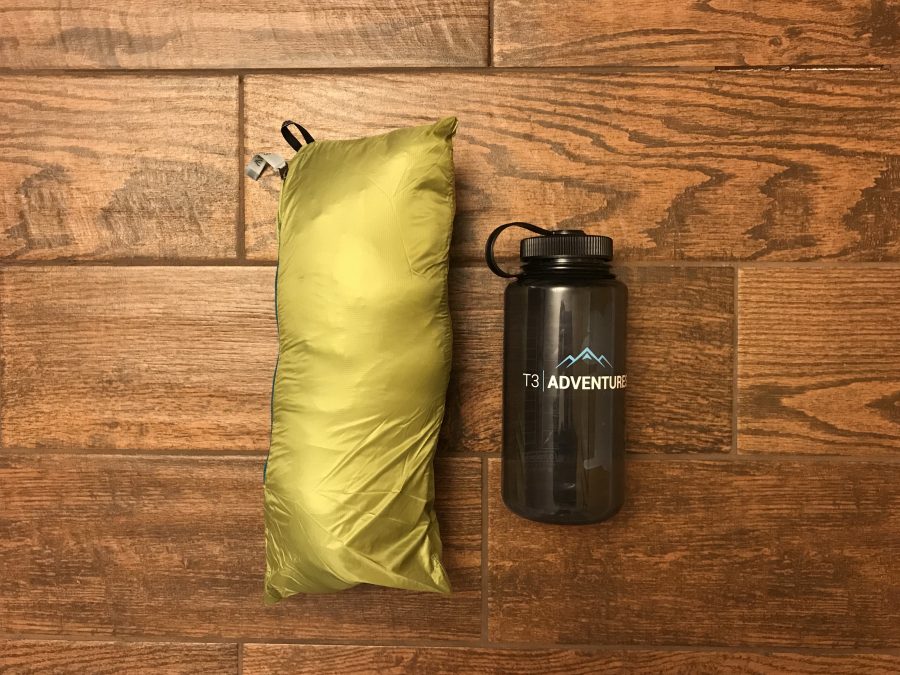 Still, the 850-fill power down insulates the pockets well, as one tester remarked once the sun left the trail on a hike outside of Denver. She added, “ … the pockets were easy to open and close with gloves/mittens on … perfect for when I didn’t want to expose my hands to the elements.”

From a wintery month in North Carolina to hikes outside of Denver, the 12.8-ounce LL Bean held up against the elements and some direct scrapes with an icy hillside. There were some stitches loosening along the logo, however. Like most coats in this category, it packs away into an internal pocket, and there are additional pockets on the inside, one allowing for a headphone cord. 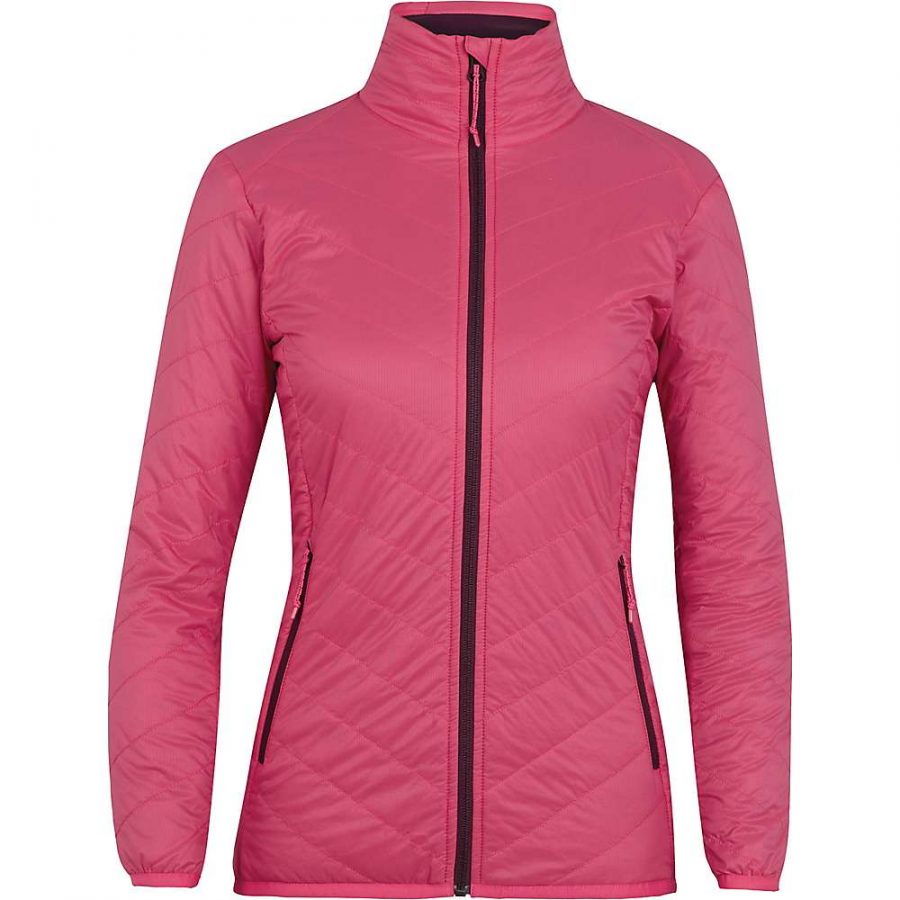 This jacket uses 100 grams of MerinoLoft insulation, which is described as “ … sustainable, high-lofting fill made up of 88% merino wool and 12% Polylactide, a biodegradable polyester derived from renewable resources, such as corn starch, cassava roots, chips or starch, or sugarcane,” which sounds good enough to eat. The jacket’s shell emulates the Patagonia test entry, too, using Pertex Quantum Air with a DWR for a lightweight, wind-fighting exterior.

There’s no hood on this jacket, but it does stuff into an internal pocket, boasts narrow side-quilting for a body-hugging fit, and external handwarmer pockets. Our testers dug the quality of the construction, citing it looked sharp when worn and felt comfortable under a backpack. The high, insulated collar and cuff design helped combat the cold when active. The coat allowed for a range of layering options with no bunching or restriction as when one tester put it on over a midweight Smartwool base and Icebreaker Quantum vest. It also wore well as a stand-alone midlayer under a hardshell. 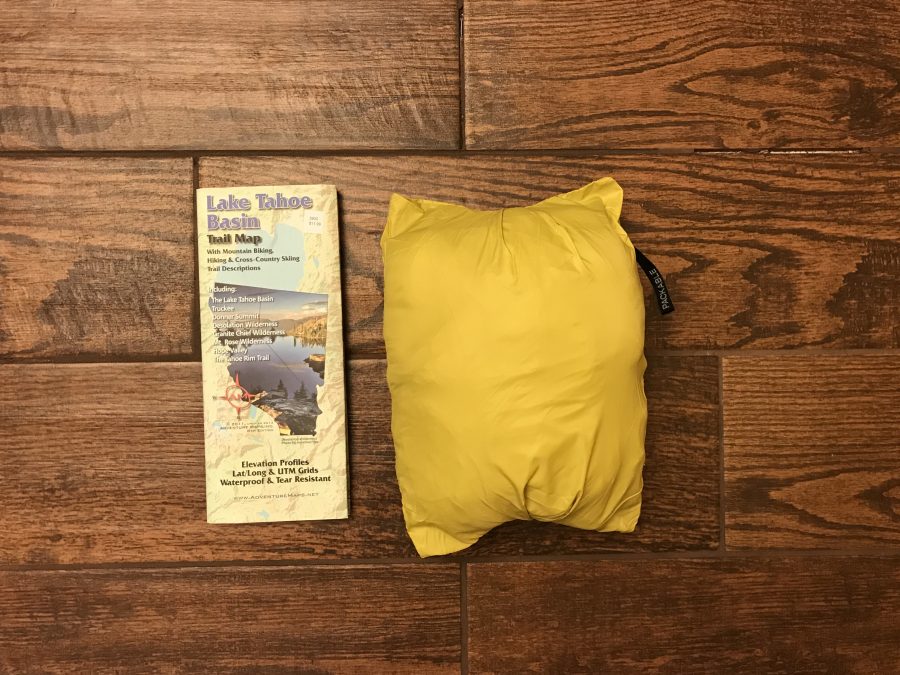 While the jacket fulfilled our testers’ expectations, it did not exceed them. One tester told us, “I found that its sweet spot with a midweight wool baselayer was only down to about 30 degrees. Add a midlayer and I was comfortable down to around 20 degrees.”

In terms of moisture resistance, one tester stated she would “ … feel confident wearing this in a chilly environment when wet.”

The coat was tested while fat-biking, enjoying apres, general winter hiking, and around town. It took on light snow, below zero temps, and windy days around freezing. 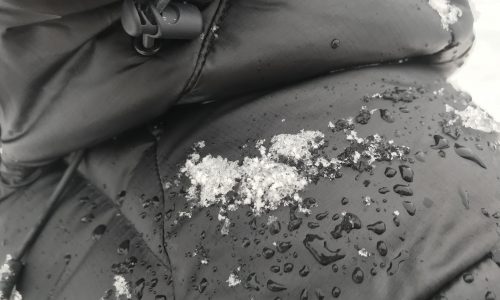 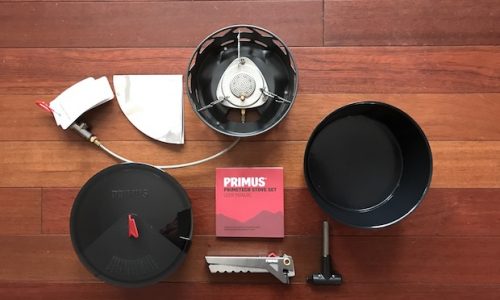 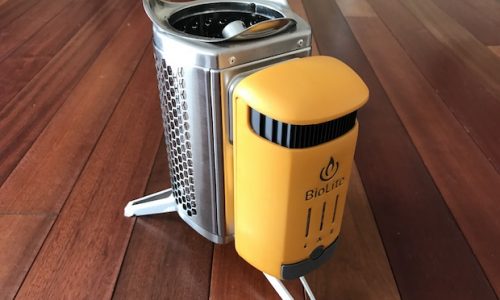