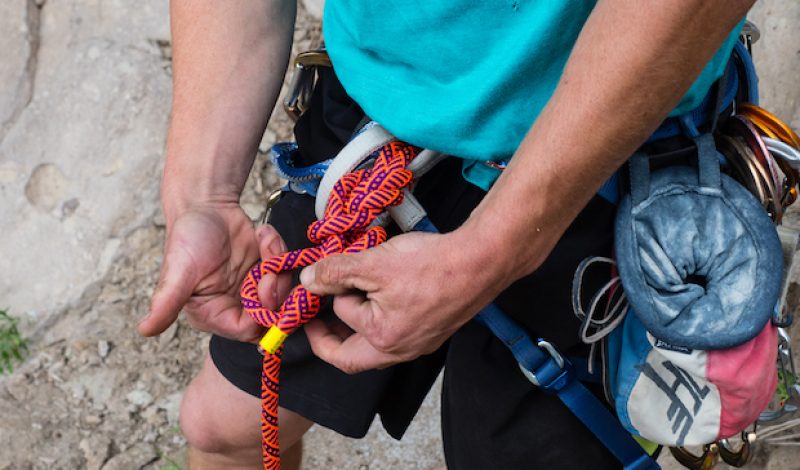 The UIAA released a rope water repellency standard in 2014 to ensure the safety of ropes that encounter moisture. Not only does moisture absorption negatively affect the strength of the rope (by as much as 70 percent), but the heaviness, bloating, and potential to freeze make them nearly impossible to use safely. Rope manufacturers have slowly obtained the specific testing equipment, and Sterling has now released DryXP ropes that meet these rigorous UIAA water repellency standards.

The standards consist of a precise testing method conducted on a specific rig that is the responsibility of the rope manufacturer. The procedure and equipment subjects a rope sample to light abrasion over its entire surface, mimicking a few days of climbing. The sample is then soaked in flowing water, drained via dropping and finally weighed. Every aspect of the testing procedure is specified down to the most minute detail. A UIAA water repellent rope must not gain more than 5 percent of its weight in water after this testing procedure. The pass or fail specification will help standardize the “dry” ropes on the market; historically rope manufacturers defined the term with treatments and the effectiveness varyied widely.

Sterling recently announced its DryXP label ropes meet the UIAA water repellency standard. The Evolution Helix 9.5 is one of its ropes that is now available in a UIAA water-repellent certified version. Gear Institute tested the regular version of this rope earlier this year, and this UIAA certified dry version expands safety and usability to a more expansive array of objectives. The Evolution Helix 9.5 DryXP receives both Sterling’s DryCore and DeltaDry treatments. DryCore has been standard on every Sterling dynamic rope for two decades and signifies a treatment that is applied to core fibers to mitigate yarn-on-yarn abrasion, which allows fibers to share loads more equally and limits moisture absorption. The DeltaDry process applies an environmentally friendly, water repelling nanoparticle to the entire rope, aiding its jump to the UIAA water repellency standard and beyond. 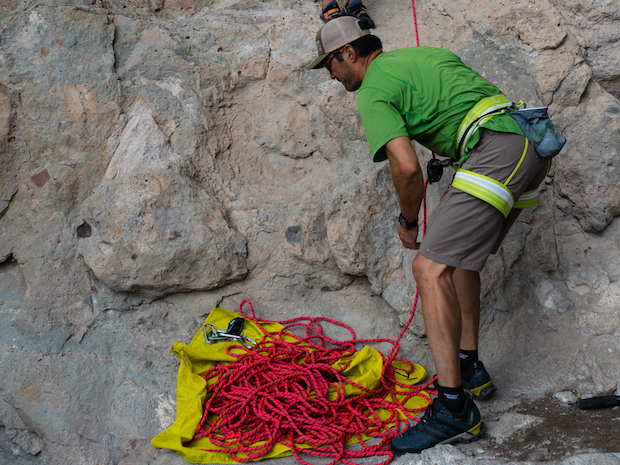 I tested the Sterling Evolution Helix 9.5 DryXP during a climbing trip to Enchanted Tower, New Mexico. The group of climbers on that trip included both beginners and expert level participants. The rope was put into both top rope duty and redpoint leads, earning a lot of falls in both situations over a short period of time. The welded tuff was abrasive and sharp in places; grit and dust factors were high, with occasional afternoon showers adding to the rope abuse. Belaying occurred via standard tubers and various braking assisted devices. Upon returning to my home crags, the rope labored during personal climbing days on pocketed limestone, rounding out ten climbing days of heavy use.

Climbers found the rope to be supple, knotting easily and giving a soft hand as it glided smoothly through belay devices. Other than becoming kinked during the first few full pitches (easily remedied by pulling the rope through the top anchors and switching climbing ends a few times), these characteristics remained fully intact throughout the testing period. The 9.5mm diameter split the difference between ultra skinny cords that demand more attention during belays, lowering and rappels and the larger diameter workhorses that might not be ideal for redpoint attempts at the absolute limits. The sheath became just slightly fuzzy, mostly from group top rope use. I considered the amount of visible sheath abrasion to be low when considering how much rubbing the rope encountered during the group top rope sessions. Dirt resistance was high as I would normally expect to wash a rope upon returning from a group outing, but it proved unnecessary. The rope easily withstood any noticeable water absorption when left out during afternoon rain showers with any surface water drying quickly. The obvious black middle marker was handy during rappels and for judging the length of long routes (bicolor versions are also available). 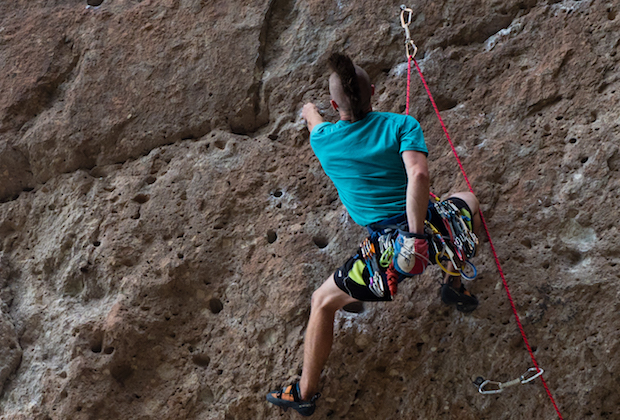 Sterling categorizes the Evolution Helix 9.5 DryXP as their “skinny workhorse,” and I find that name fitting. The diameter, weight, and handling characteristics bridge the gap and are effective for both redpoint working sessions and the eventual send. The UIAA certified water repellency extends usability into adventure, alpine, and ice climbing as well. I am confident that this well-rounded cord will find its way into my pack for a wide variety of vertical adventures to come.