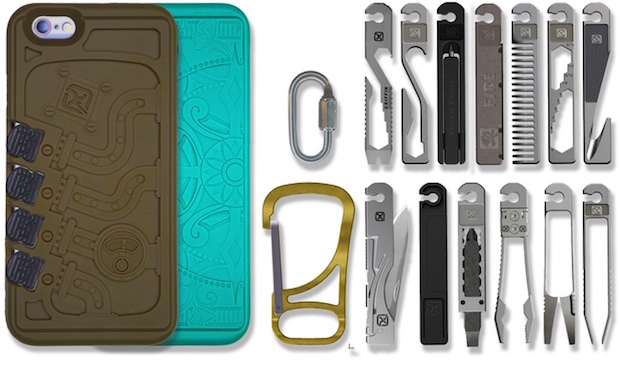 Innovative product ideas get thrown across the bow in the outdoor world quite a bit. Without fail, someone always has an idea of how to make their – and ultimately your – experience in the outdoors better. Most of these things end up sinking, but a few of them stay afloat and catch on to become something new and wild that we all end up embracing. In that same scenario, there’s a third group of ideas that materialize into products that you have to give a second look in order to truly capture their worth. For me, those products include the Stowaway Line of Tools & Carriers from Klecker Knives.

Having reached its Kickstarter goal in just a couple of days, the Stowaway system is a series of tools designed to integrate into a specially designed iPhone case or be used in EDC key-tools like the KeyBar, KeyPort, Orbitkey, etc. The available tools include such staples as a folding knife, bit driver, and scissors but also branch into important, but lesser known utilities like locking pliers, fire starter, and a folding pen – just to name a few. All of these tools are compact and designed to fit into the aforementioned key-tools, or can be stored in one of two new cases for the iPhone 6/6S and 7.

There have been rumblings for a “need” for a system like this since KeyBar hit the scene a couple of years ago. Since that time there have been a couple of homegrown solutions made, although nothing has been as significant or complete as this system from Klecker. 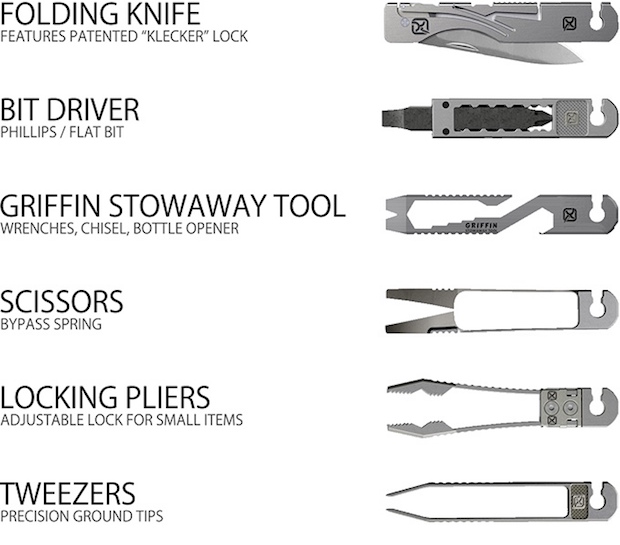 I was first alerted to the Stowaway Line of Tools & Carriers by Klecker a week ago and, I’ll be honest, I needed to digest the whole thing to really see if it was something that Gear Institute should cover. As someone who carries a lot of tools and gizmos with him everywhere, I understand the need to clean up pocket clutter. But what is the level of sacrifice that comes with replacing some of your full-sized tools with these smaller ones? Will these smaller tools hold up to the task? Are they supposed to? I firmly believe organization is important on many different levels, provided it doesn’t impede function.

Being a KeyBar owner and daily user, I can see the line of Stowaway tools coming in handy in a jam as the KeyBar frame would act as an extended handle for extra leverage. I also like the idea of storing some of these tools in a specially designed phone case – but I would limit them to some of the lighter duty tools such as the tweezer and possibly the ferro rod. 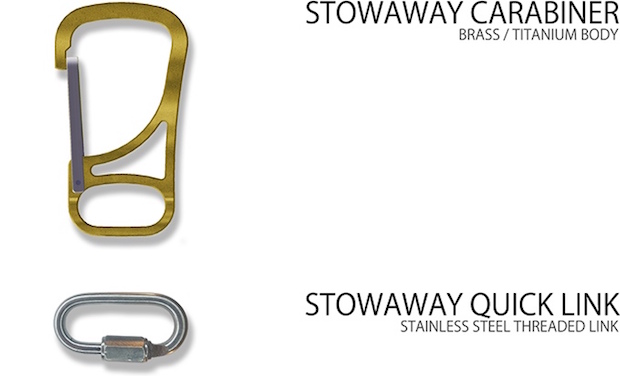 Overall I like the idea of the Klecker Stowaway Line of Tools & Carriers especially since I am an organizational freak whose pockets are usually filled with all sorts of “things.” I’m just hoping they don’t reach too far here and instill some sort of false confidence in the user. Case and point, a folding knife coming out of your key-tool is a bit of a stretch. It has too many moving parts to navigate for deployment and effective use when a straight blade or razor would work just fine.

So I guess if I had to draw a line in the sand, I would say that the Klecker Stowaway Line of Tools & Carriers looks like a great set of products, as long as you stick to the right assortment of tools. They are certainly innovative and being launched at the right time – as EDC tools are super-hot right now. Just don’t stick a pair of locking pliers in the back of your phone and expect too much out of them, and you should be fine.