Winter Gas Powers Your Camp Stove Even in Frigid Conditions 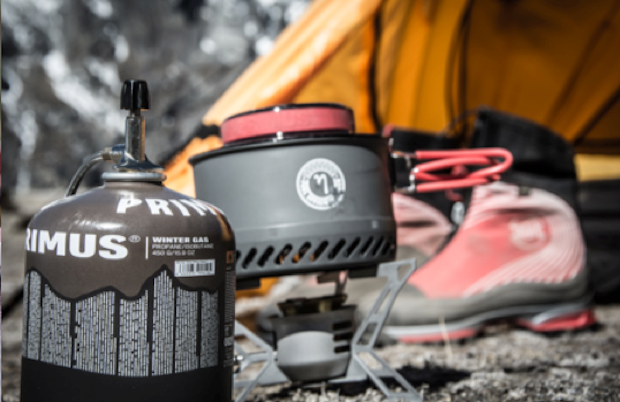 For many outdoor enthusiasts’ winter doesn’t detract us from pursuing our favorite activities, it just means that we have to adjust our clothing and gear for the change in temperature and environment. Oddly enough, though, we rarely consider the effects that colder weather and the change in air pressure has on the fuel we use in our camp stoves. Instead, we struggle through trying to cook our meals, hoping that they’ll at least be warm enough to eat.

But Primus recently launched a line of gas canisters earlier this year aimed to restore our trailside cooking efficiency in the frozen months. Aptly named “Winter Gas,” the pressurized canisters, which are available in 230G and 450G versions, are lined with a highly absorbent paper filter dubbed VapurMesh. This liner helps to maintain the pressure levels inside of the canister, which allows the liquid to change to gas faster than traditional fuel sources, even in temperatures dipping down to -7° F / -22°C. This heightened level of efficiency translates into you enjoying your Mountain House Beef Stroganoff in minutes, instead of hours.

All things considered, temperature has the biggest impact on our outdoor activities. The outdoor product industry recognized this long ago and companies are constantly pouring their efforts into innovative clothing and gear to keep us cozy while we’re in the backcountry during the frozen months. Oddly enough, there hasn’t been much innovation in how we prepare our food out there however, so take comfort in knowing that Primus has your back with this alternate form of fuel. After all, its the company that pioneered the pressurized gas camp stove over a century ago, and who’s stoves have been relied upon in the most extreme conditions ever since.

When Winter Gas was first introduced back at the Winter Outdoor Retailer show in January, we were so impressed that we gave it a “Best New Gear Award.” Now, it is finally available to purchase at your local retailer. The fuel can be used with a variety of Primus stoves as well as stoves from MSR, Snowpeak, and Jetboil, just to name a few. Suggested retail is $8.95 for 230G canisters and $14.95 for the larger, 450G ones.

Half a Century of Innovation: MSR turns 50!