Udee is a Travel Pack With Every Feature Imaginable 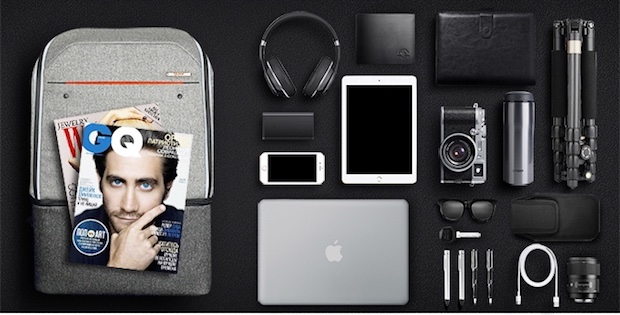 If you’re still struggling to find the perfect pack to take with you on your travels, we may have just discovered the answer to your prayers. Recently launched on Kickstarter, the Udee bills itself as “the world’s most versatile backpack,” and one look at its set of features makes it is hard to dispute that claim. This is a bag built from the ground, up to meet the demanding needs of the modern traveler, and as such it delivers an impressive amount of functionality in a compact package.

Made from high quality waterproof fabrics that were carefully selected for their ability to resist the rigors of the road, the Udee boasts a total of 25-liters of carrying capacity, and nine individual pockets to stow all of your important gear. Those pockets include a laptop sleeve of course, but also dedicated compartments for holding a phone, passport, pens, and other important items. A hidden security pocket on the pack is perfect for stashing away valuables, while the cavernous main chamber is capable of swallowing up just about everything you toss into it.

But, that’s just the beginning. The Udee also has a pocket that is designated just for holding a USB battery pack, which has become a common accessory for travelers these days. That pocket includes a built-in USB cable that connects the battery pack to a standard USB port located on the exterior of the bag. This allows travelers to plug in a smartphone, tablet, or other device, and get a charge at any time. This is a surprisingly handy feature to have when hustling through airports or sitting on a plane, and keeps you from having to sift through your pack looking for a charger when you start to run low on juice.

As if that wasn’t enough, the bottom of the Udee is also an integrated camera bag that comes equipped with several padded panels that are lined with Velcro. Those panels can be moved inside the camera pocket to adjust the configuration of the interior of the bag to suit your personal needs. This allows the Udee to accommodate your specific camera body, lenses, flashes, and other accessories. A zipper is conveniently located about two-thirds of the way down the front of the pack, providing quick and easy access to your photography equipment whenever it is needed. 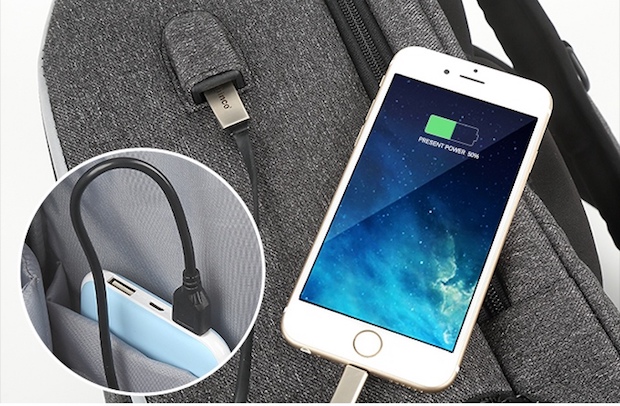 Other nice features that travelers are sure to appreciate include security zippers that can be easily locked to prevent unwanted access to the interior, a built-in headphone port, and optional LED safety lights that make the wearer more visible in low light conditions. The Udee also has a luggage belt to securely connect it to your other bags, carabiner loops for attaching excess gear, and shoulder straps designed to reduce the weight of the load the pack is carrying. Heck, there is even a built-in portable cooler for keeping beverages cold and a place to store dirty laundry too. In short, this backpack pretty much has everything you need, falling just short of the kitchen sink.

I’ve been fortunate enough to get my hands on an early prototype of the Udee, and I can attest to how well it is made and how thoughtfully it has been designed. While some of the features may sound gimmicky on paper, they are well executed in the layout of the bag, making them very handy while on the road. For instance, the built-in USB port is great for those of us who carry a battery pack to keep our mobile devices charged. I only wish there were two ports so I could charge more than one item at the same time. I’m also a big fan of the versatile camera compartment, which is incredibly useful for those of us who still need to lug a DSLR with us on our travels from time to time. 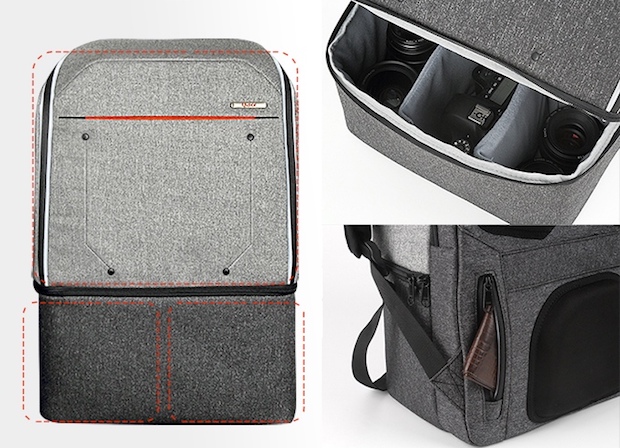 My only concern with the Udee is that the pack is a bit on the bulky side. It has an integrated frame that allows it to stand up on its own, which is a nice feature to have when you want to sort through the interior. But it also makes the bag more rigid too, which could make it tough to squeeze under the seat in front of you on an airplane, or even stuff into a crowded overhead compartment as well. This design does help to provide more security for any fragile items inside, but it gives the bag a shape that may be off-putting to some, making it less flexible than other options that are available.

The designers behind the Udee are seeking $20,000 to help make the backpack a reality, and as of this writing they have already nearly reached that goal. That means that they should be able to finalize the design and move into production later this spring as planned. The pack is expected to begin shipping in May at a cost of $199 for the basic version, and $229 for the model that includes the built-in LED lighting. Both editions of the bag can be had at substantial discounts if you pre-order one now.

For more information, and to reserve your backpack, visit the Udee Kickstarter page.