This Multitool was Made for Eating at the Campsite

I’ve spent the past few years making sure everything I carry in my pack can perform two or more general tasks. For the most part, I’ve been successful, but when it comes down to eating utensils, I’ve struggled to find a fork or spork that I am willing to do much more than transfer my Dinty Moore Beef Stew from my JetBoil to my mouth. I know they could easily dig a hole or even defend me against rabid wild life – but I keep them sheathed and segregated for sanitary purposes and my ongoing pursuit of self-preservation.

The key to creating a multi-function eating tool is to make sure it sticks to food preparation and doesn’t get overly complex. We’ve seen a few attempts at this over the year, mostly on a multi-tool platform, that – in theory – seem like a great idea, but in practice don’t quite live up to the hype. What we need is something on a simple platform that can be shaped and cut out to perform a multitude of tasks without the need for bending, folding, or ancillary hardware. What we need is “The Muncher” from Full Windsor. 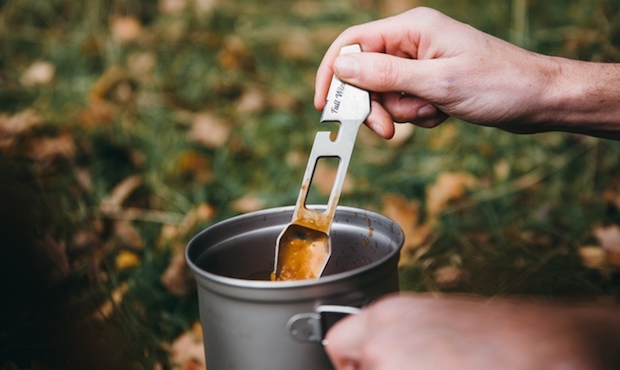 Marketed as a “Multi Utensil,” The Muncher features eight on-board tools, all on a single, semi-flat, plane: spork, peeler, cord cutter, can opener, prybar, box cutter, serrated knife, and bottle opener. This design allows for easy storage, and improved use over what’s already out there. Additionally, if you choose to back the version that includes the Hypalon carry pouch, you’ll receive a ferro rod which could really send this sucker into orbit as the be-all, end-all camp kitchen tool. But with a $50+ price tag, it might be hard to convince the masses to put down their sporks and pocket knives and convert up.

Time will tell. I know I’m going to go home and rationalize with myself about it as I kick myself for missing the Early Bird deals on Kickstarter. 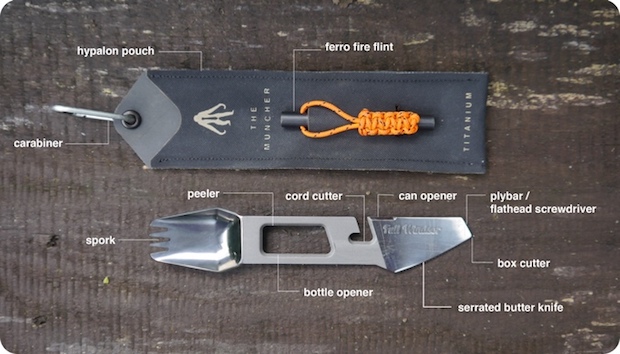 Having already quadrupled its goal, “The Muncher” is still in the middle of its crowdfunding campaign, but if Full Windsor knows what’s good for them, they should go into production immediately, as this little bugger has the potential to take off like a rocket. And since it is made from aerospace grade titanium, that analogy isn’t very far off the mark.

If all goes as planned, Full Windsor plans on having the first wave of Munchers ready for delivery by April.