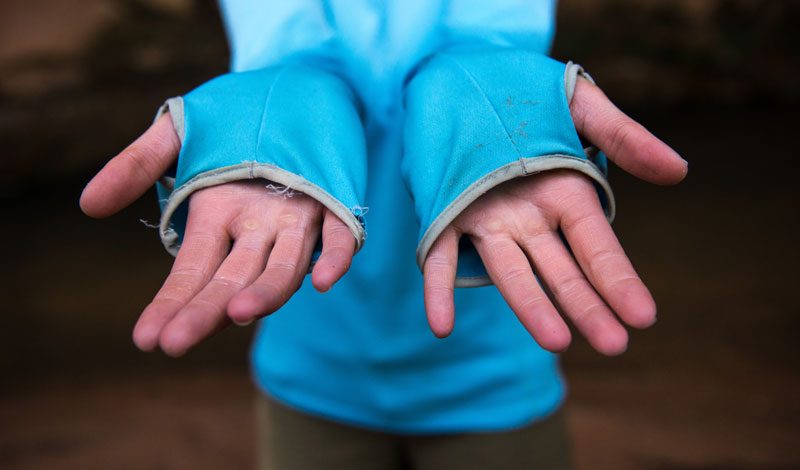 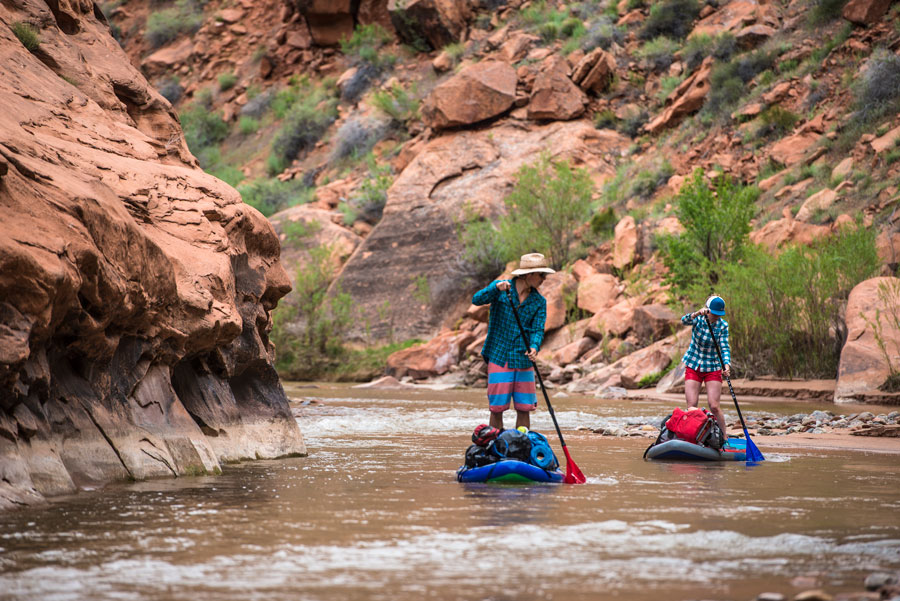 In May, four friends and I made the first SUP descent of Utah’s Escalante River, one of the most remote waterways in the lower 48. The deep canyon and its twisted arms are so middle-of-nowhere that the region was the last to be mapped in the contiguous U.S.—a process that started in 1871 and took six years to complete. Undammed and 100 miles long, the zigzag of whitewater and its colossal sandstone walls—plus the erratic weather—created an ideal laboratory to test gear.

Our window to run the river was tight, and we wanted to keep the amount of gear we carried as streamlined as possible. So, as a self-supported, minimalist expedition, we tactfully hunted down what we thought would be the lightest weight, hardiest equipment. Here are eight highlights from the apparel, equipment and food that I would definitely take back if round two were to happen. 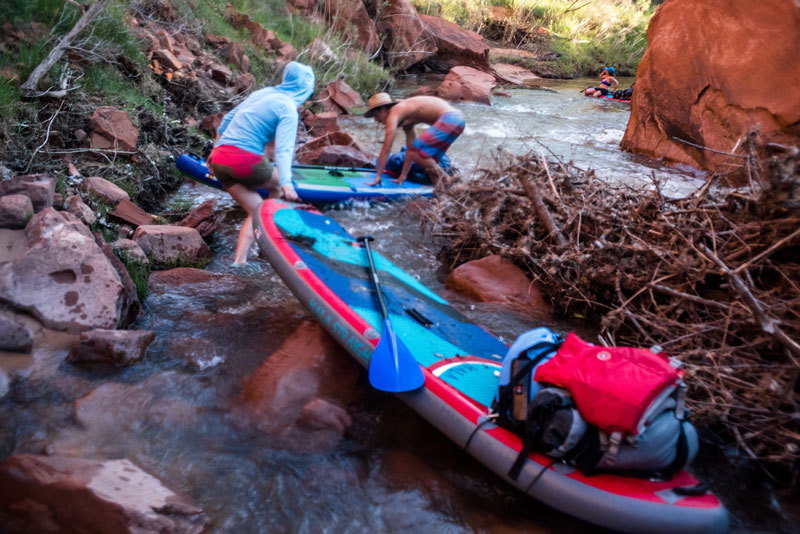 The Straight Up, designed by Hala Gear, proved resilient and ideally suited for the Escalante trip. Post-adventure, we were amazed that none of our boards had popped. Conditions along the Escalante range from extremely low water—as in, dragging one’s boat down a trickle and over pebbles—to sliding against sharp tree roots, navigating Class III-IV whitewater and slamming into prickly boulders. And after we passed Neon Canyon at mile 36 we didn’t see a soul for the next 60 river miles.

In light of traveling to such a remote area, durability was top-of-mind as we considered which stand-up paddleboard to use. The only wear and tear noted following the trip—other than a handful of buff marks—was that a sliver of my board’s sidewall reinforcement (about the width of a pinky nail) was beginning to peel up. It’s not enough for me to be concerned, but I’ll probably apply a drop of the MEK chemical glue (which is included with the Straight Up package) to be extra safe.

The Straight Up’s a traditional shape (it’s not a pointy race board) and slightly rocker profile is meant to be great for all-around sportiness, which I found to be true. The board handled well on both whitewater and the glassy lake. Removable fins were a necessity for us, due to the variability of the river. The Straight up includes three, which we carried and inserted once we reached Powell’s flat pool in order to track straight. The Straight Up features reinforced stainless D-rings, which we needed for rigging down our dry bags and to tie a leash onto the back. We wanted inflatables rather than solids for ease of transportation—for our drop-off at the put-in and then for the boat pick-up at Lake Powell—and adaptability, in case we needed to hike out of Crack-in-the-Wall (mile 76) due to low water or an emergency. The 10-foot long, 33-inch wide size is a smaller model and was easy for me—close to 5’6”, 130 pounds—to maneuver.

The Straight Up package ($1,359) includes two pumps. To start off, the 12V car pump is awesome for quickly airing up the boats. The process is easy (remember to release the pin while inflating) and takes about five minutes. We carried the second pump—a lightweight hand-held with a gauge—on the actual trip, which didn’t take up much room.

Off water, I’ve also loved the rolling backpack that the Straight Up, it’s paddle and accessories all fit inside. When I lived in a 400-square-foot studio, the pack was easy to store and carry the SUP up-and-down four flights of stairs. 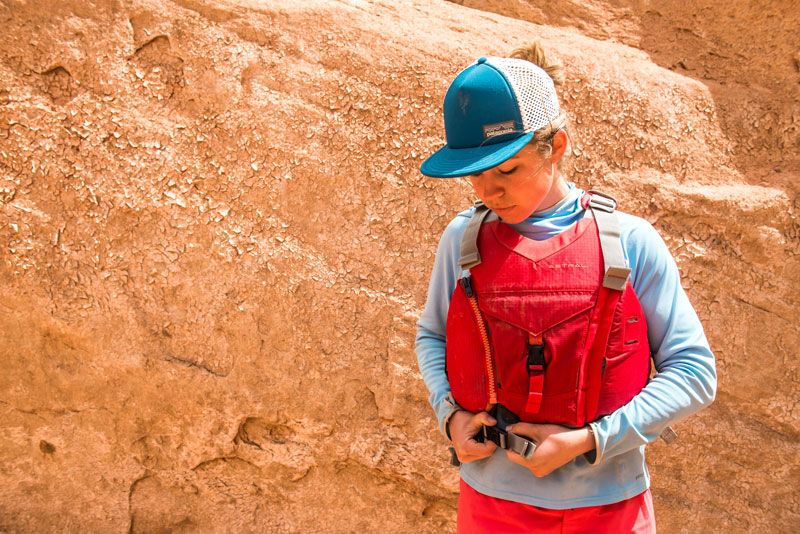 I actually didn’t know until post-trip that this hat ($35) is designed for runners—and just happens to also be stellar for river running. Aside from being super stylish, the number one reason why this hat was so awesome is because it remained afloat countless times after I was tossed from my board or a tree branch pulled it off of my head. The breathable mesh allows for plenty of aeration, and the hat is compressible and easily regains its shape, so I could push it into my dry bag.

Hands down, this is the most comfortable PFD I have ever worn—probably because it’s actually designed to conform to a woman’s frame. The Layla features hinged seams and a cupped chest so it works with curves. Not to mention, it’s made from extremely soft and organic Kapok: a sustainable, buoyant plant fiber, which is sourced from the seedpod of the kapok tree. And, it just looks good ($139.95).  Astral makes a range of PFD options for men, too, $99.95-$249.95. 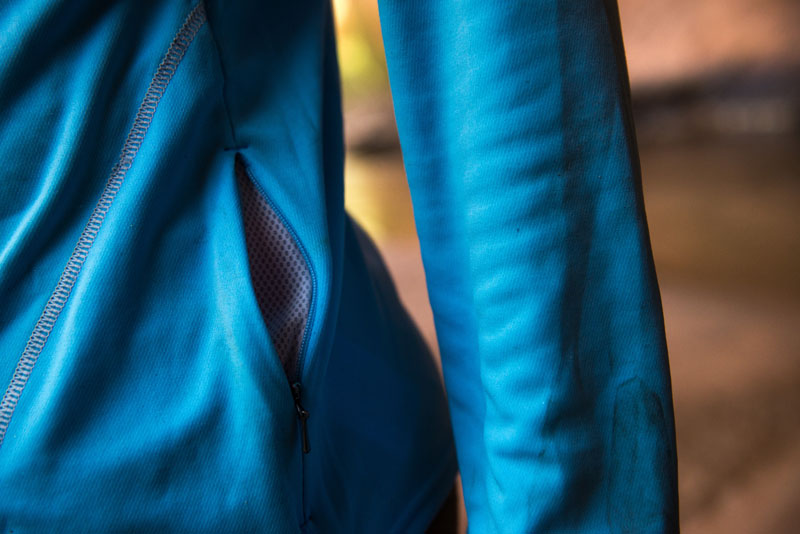 The Sunshade Hoody ($69) features 25-UPF sun protection, and despite my fair skin, I never once needed to apply sunscreen or curse red aftermath for the entirety of our (mostly sunny) trip. The cut is just right—it’s flattering but not tight—and the arms’ extra length and thumbholes shielded my hands from the sun, too. The zippered pocket in the lower front is streamlined and I hardly noticed it. Wide and stretchy, the hood provides excellent shade without being cumbersome. While the shirt is lightweight and did dry fast, it did not dry as quickly the Stio Eddy Gingham Shirt that I packed—which would be dry in about five minutes. The trade off was the hoody’s superb sun protection. The only drawback to this hoody is that the seams began to show wear and tear after only this week on the water. Patagonia also makes a men’s Sunshade Technical Hoody, $79. 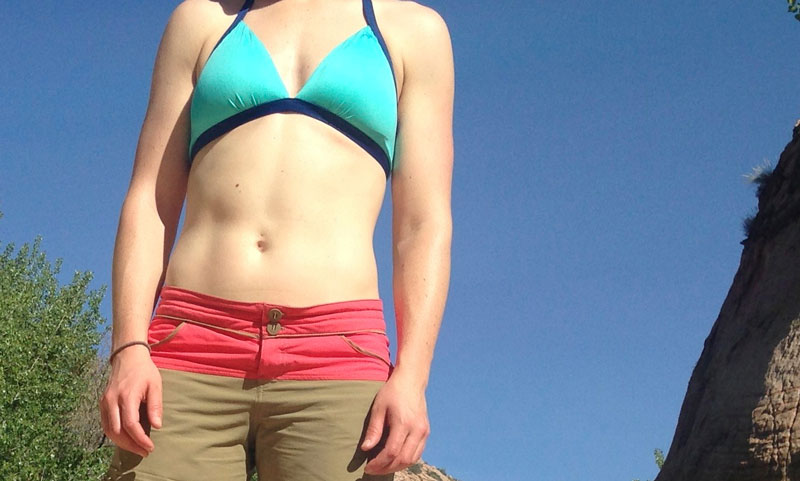 I didn’t test the Nanogrip Top ($65) on a waterslide (ladies—we’ve all experienced that moment in the spotlight) but I certainly got thrashed around in the rapids and my top never once came up or undone. Enough said. The halter-style bikini top is attractively cut with a triangle design, and it’s lined with slip resistant material. I’ll be wearing this for all future surf, free water soloing, or cliff jumping adventures. 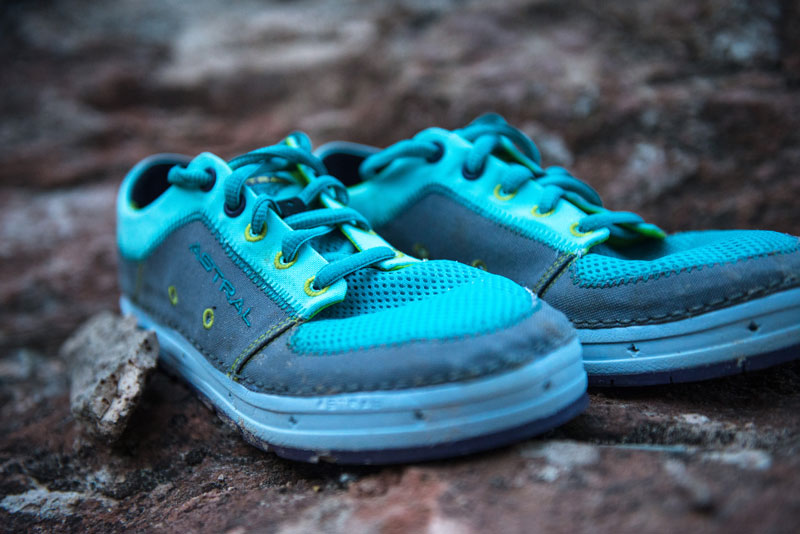 On a 100-mile river trip, that last thing I wanted to do was cut open a toe. And, I didn’t want to carry more than one pair of shoes. Enter the Brewess: an excellent sneaker for SUPing, walking on the riverbed and short hikes around the desert. Astral claims that the outsole’s G.ss rubber is their stickiest compound; while I haven’t compared the G.ss to any other compounds made by Astral, I can say that this rubber did have exceptional grip on wet, slime-covered and muddy surfaces. 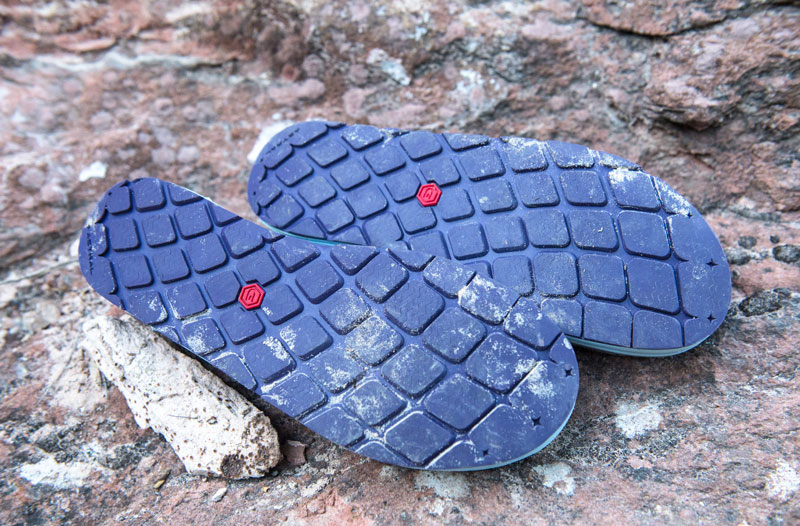 As a novice river runner, I’m not exaggerating to say that my confidence skyrocketed. Other features include the slit in the heel for sand drainage, the hydrophobic canvas and airmesh upper—which allowed my only pair of shoes to quickly dry—and the drainage ports in the forefoot. Even the laces are water resistant, so they held up. Plus, they were so comfortable that I actually missed wearing them after the trip ($99.95). The men’s version is the Brewer. 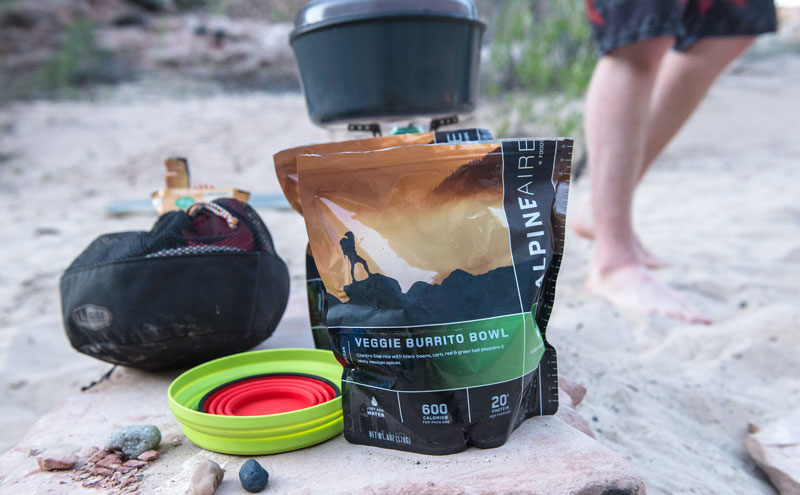 Aside from a handful of fresh foods that could survive a weeklong trip, most of our calories came from compact, dehydrated pre-packaged meals. One of our paddlers was gluten-intolerant, and fortunately Alpineaire has a wide variety of gluten-free options. Our five-member crew also had a spectrum of taste preferences, but unanimously, the group’s favorite options were the Veggie Burrito Bowl ($5.95) and Peasant Omelet ($4.12). 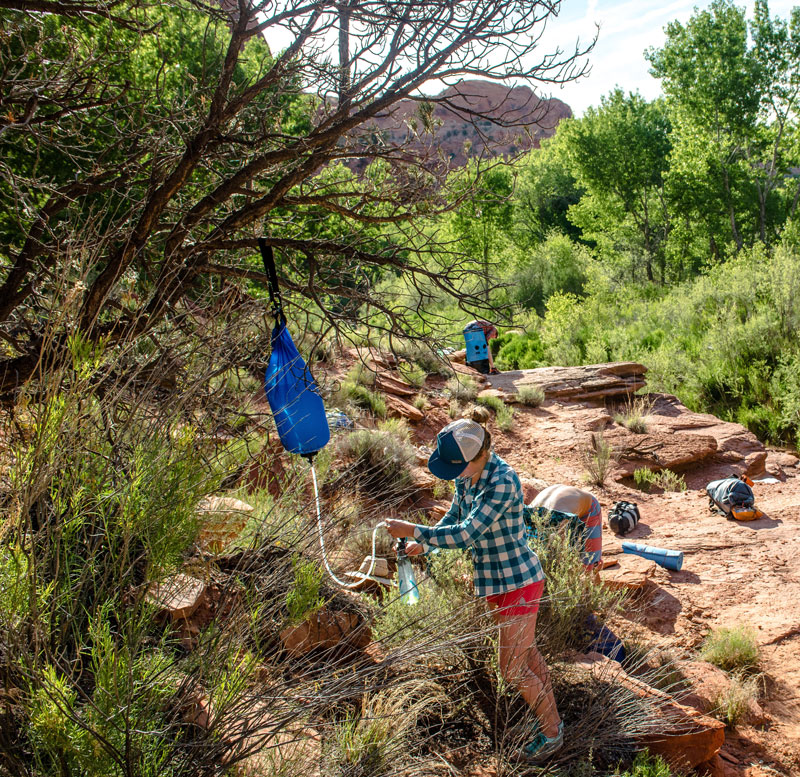 Fill, hang, flow. This water filter is a luxury for anygroup camping adventure, but especially on a trip when you’re squeezing in 12-hour days on the water from dawn to dusk. On a waterway like the Escalante, which is full of silt, this filter did clog up before the week was over. In hindsight, we should have implemented a pre-filter system, so consider that practice before your own trip. Warning number two: do not hang your Base Camp Pro above anything sharp or pointy ($99.95). Ours fell off of a branch onto a cactus—no joke—and resulted in countless holes. Fortunately, the filter was still usable!

–To learn more about this first-descent SUP trip down the Escalante River, check out the print feature in the SUP Magazine 2016 Winter Issue and the digital story on Outside. To view more work by photographer Dylan Brown, click through here.