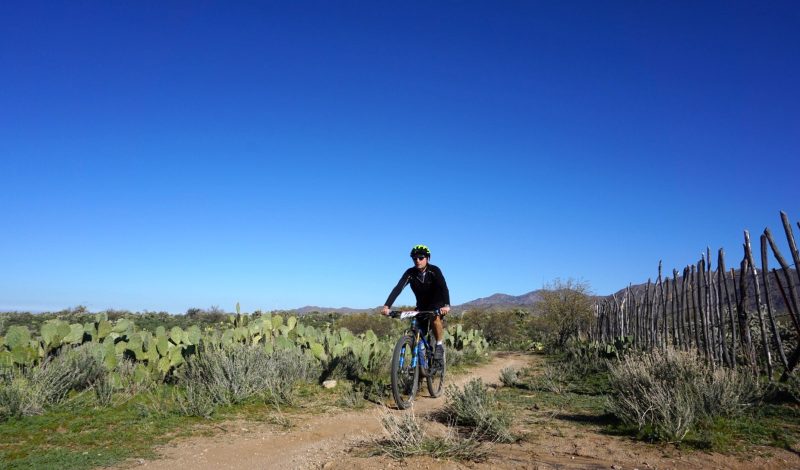 Hustle in the Desert

Do you enjoy mountain biking copious miles? How about in the Sonoran Desert? Try the “24 Hours in the Old Pueblo” mountain bike race. Does 24-hour racing sound like hell? I agree and was (sort of) happy when the trend collapsed years ago under its weight, yet this race continues – and with good reason.  With over 20 years of history, a race founder who is an Epic storyteller and a vibe that matches the desolate and magnificent Sonoran Desert – the only thing to fear is fear itself. Well that, the cacti, and maybe the porta-potties.

A “24-hour town” blossomed in the middle of the 16-mile hourglass-shaped course in the days leading up to the event. There were approximately 1,200 feet of climbing per lap, but no soul-crushing ascents. Nearly 100% of the course was on buff and twisty single-track. A b-line was available when things got technical. Conversely, there was a single-track long-cut to avoid the vicious “Bitches” – seven hills and descents in quick succession on a washed-out dirt road. I was curious how passing would work on a single-track course with a few thousand riders of divergent abilities. Trails offered generous passing opportunities and bottlenecking was rarely an issue. Concerns about getting lost at night were unfounded as the course was on the only trails in the area and there were always other folks around to follow.

Quality and reasonably priced food were available during the entirety of the weekend at food trucks, as was water, tech support (not the computer kind), porta-potties and showers – just about everything required for a 24-hour bike race.

Race founder Todd Sadow dropped by campsites during his race day vigils and regaled riders with stories from 20+ years of 24 Hours in the Old Pueblo.  His stories ran the gamut from the horrifying (an unfortunate woman who made an unintentional full-frontal embrace with the notorious Chollas cactus) to the romantic (an octo-husband and his septuagenarian-wife that had wintered “van life” style in the area for decades have created the eponymous single-track that racers enjoy). 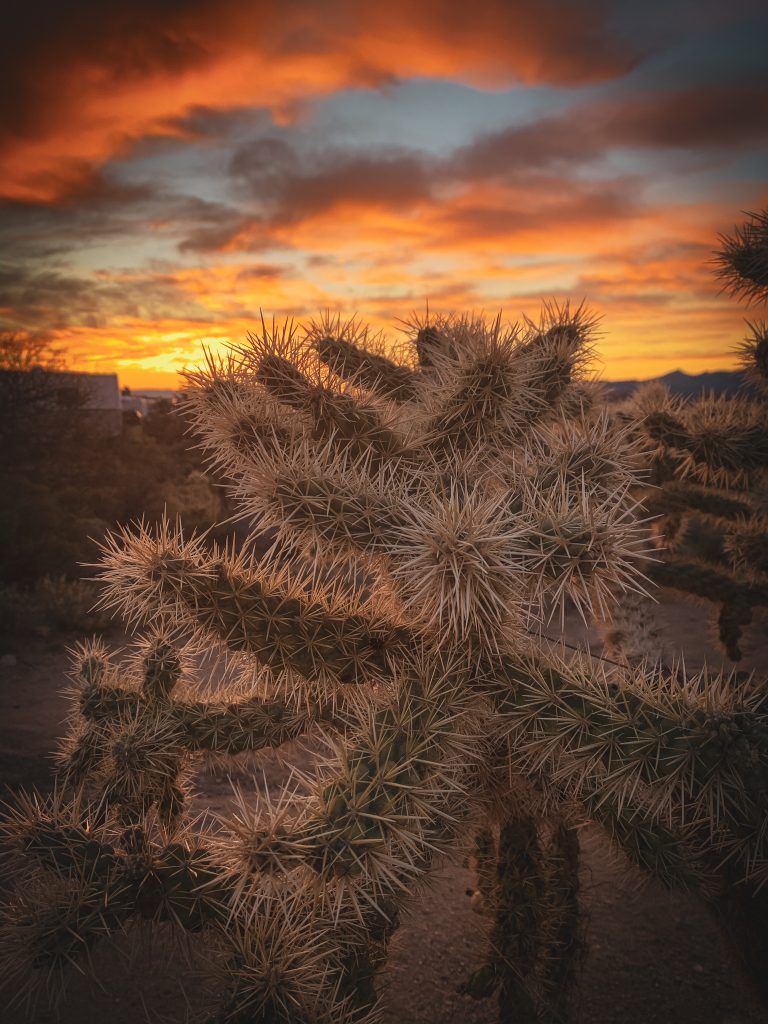 The trail was free of cacti, but making a pass a little too aggressively potentially ended with the Chollas “jumping” cacti’s barbed fruit magically detaching from the main plant and needling its way under the skin. Folks riding with combs sticking out of their jersey pockets were not imitating 1950s greasers, they prepared for safe-cacti extraction from their bodies.

The race started at noon on Saturday and ends at noon on Sunday in mid-February. Getting there a day in advance was wise to snag a good (free) campsite and to pre-ride the course. About 35% of folks come back each year so newcomers were not alone.

When it comes to racing, the event was beautifully managed, and commenced with a Lemans style start (run to your bike and go), and continued until noon the following day. The loops were quick; a sub-1 hour for the speedsters (some of which are soloing the course), over 2 hours for the folks that were having fun. Team transitions were made easy by the race management, and watching the soloists come and go was awe-inspiring. 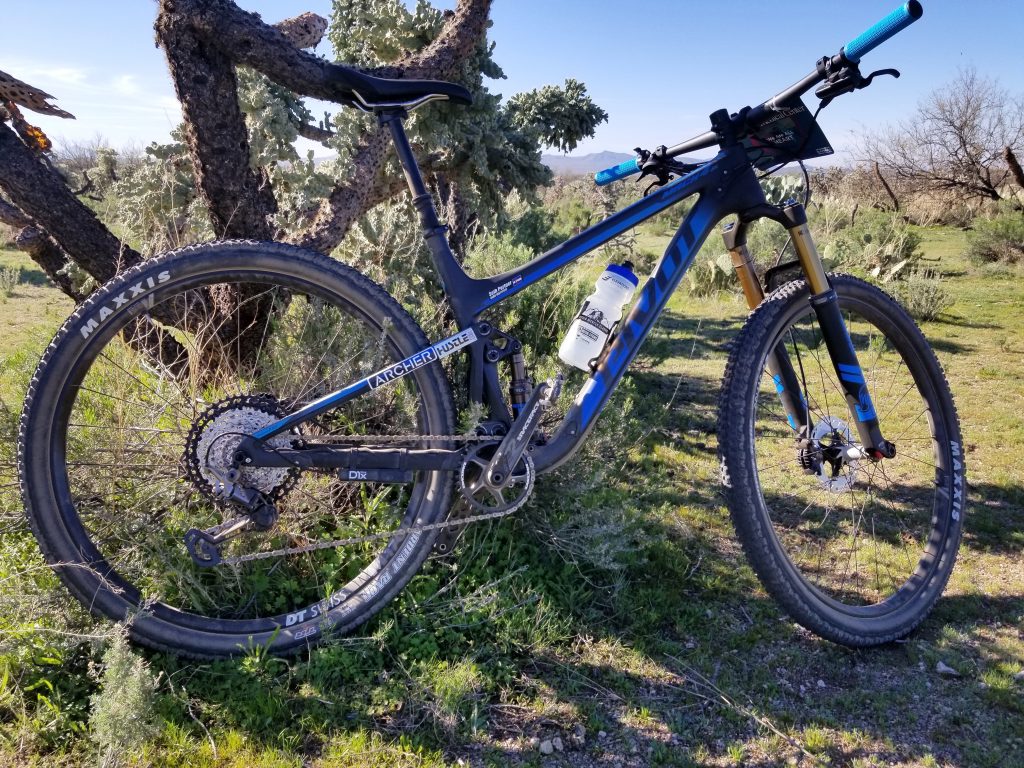 Pivot loaned me a Mach 4 SL to use for the race, which no doubt substantially reduced my lap times. Pivot is a local company based in Tempe, AZ, and their bike felt at home on the trails of the Sonoran Desert. The Mach 4 SL is a cross-country bike featuring 100mm of travel.

Having recently reviewed other bikes in this category, I was stunned by how fast, carving, and light this bike was. The Mach 4 SL was an absolute winner with magnificent efficiency from its dw-link suspension that thrusts you forward with every pedal stroke. I also appreciated that I could reach the bottle cage, no small feat in this category where the cage is often very low for those of us not born knuckle-draggers.

Because I was riding relatively high mileage (I rode about 100 miles over a couple of days), I was curious about gear performance. I used Archer’s D1x electronic shifting retrofit kit for the weekend (previously reviewed here), and it worked flawlessly under tough conditions including sand, long hours in the saddle, and race punishing shifting during cold temps. There were many virtues of the D1x, but I mostly appreciated the effortless shifting once exhaustion set in, and the perfect shift every time, even under race efforts.

I was on a team with five others, with differing skills and abilities and a low-key approach to racing. This mix of riders and attitude was the perfect way to experience my first a 24-hour mountain bike race. We had racers on the course for about 22 of the 24 hours, which demonstrates that our laziness and disorganization won out over our competitive nature. That said, the race energy was infectious, and we continued to find our lap times pushing the limits and rejecting notions of exhaustion until the final lap. What usually limited our ability to maintain riders on the course was simple logistics, also possibly over-sleeping (something the author was guilty of on at least one occasion).

Camp life is loud, and a bit dusty. I appreciated high-quality earplugs for sleeping. Many folks brought RVs, trucks with trailers, and other luxury rigs so generator noise was substantial – as was the race once started. There may have been late-night parties, but considering my preferred bedtime of 8:30 PM, I only heard stories.

Another new product I checked out while at the event was the Hustle Bike Labs REM pedal.  True love. First off, the people behind the company are awesome; great riders that love riding bikes, and smart and innovative as well. Hustle’s pedal is, at its most basic, a flat pedal with a magnet at the center that attaches to a metal plate mounted to the bike shoe where a cleat would go. Pretty simple.

The shoe/pedal combination maintained a great connection to the bike and I could move my foot into different positions. The Hustle pedal was indifferent to mud, water or sand, I enjoyed the flat pedal’s large surface area. I could also remove my foot with ease helping to avoid the dreaded foot lock. I have been alternating between flat pedals and clip-less for years; Hustle’s pedal solved that issue for me as it is both at once.

Basic logistics for the 24 Hours in the Old Pueblo:  The location was about an hour north of Tucson, 2 hours south of Phoenix in a remote desert location with no permanent services. The night sky was spectacular. The location and the need for enough gear to get through a weekend of racing and camping make driving the only real choice.

Required items:  A bike. A place to sleep- tents worked great. Clothing for temperatures ranging between barely freezing to 70 degrees. Rain is possible, though infrequent. Basic bike tools and flat repair. Food and water not required, but both recommended. Mostly, bring a good attitude, everyone does. 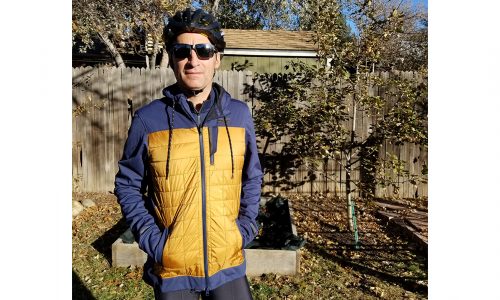 How to ride – and what to wear – in the cold