Living With The SlingFin Honey Badger 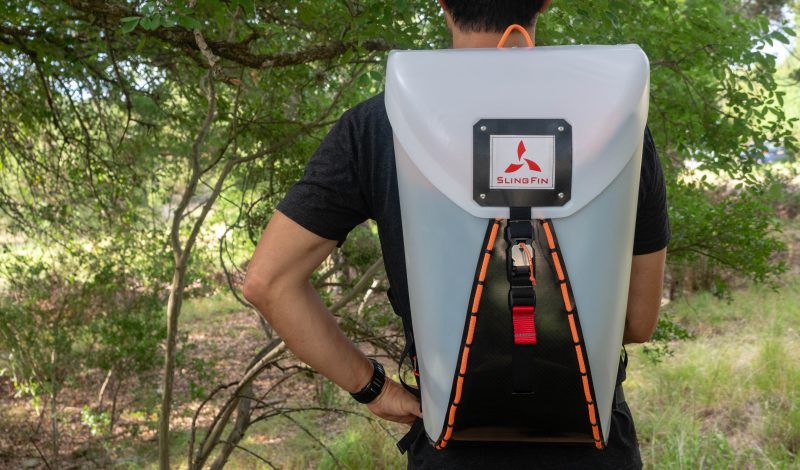 SlingFin launched a Kickstarter campaign for their aptly named, semi-rigid Honey Badger backpack late last year, and we’ve been testing an early sample since then, using it as a daily urban workhorse. The Honey Badger’s standout design utilizes a Durian HDPE skin with UV inhibitors that houses and protects the gear inside. The shell material’s physical characteristics give the Honey Badger backpack a few quirks compared to textile packs.

The standout characteristic is the overall rigidity; the pack’s shape and 25-liter volume remain constant regardless of the content’s features. The Durian shell has a woven polypropylene center panel with a cord daisy chain and a magnetic latch to close the lid. The woven mesh and foam harness components are all removable as are the suspended interior lid pocket and laptop sleeve included with our sample. We also received a roll top dry bag that functions as a standalone rucksack.

The Honey Badger as a Daily Workhorse

The semi-rigid body of the pack provided much more impact protection than a standard backpack; computer hard drives and other electronics were much safer in my opinion. SlingFin suspends the laptop sleeve from an aluminum bar at the top of the pack, which virtually made it impossible for the computer to receive jolts from dropping or setting the Honey Badger down. Items placed in the lid pocket also enjoyed the same benefits of being suspended. The dry bag functioned as designed, but the Honey Badger was reasonably resistant to rain by itself.

The shoulder and waist harness, along with the rigid overall nature of the pack, provided a much more stable carry compared to simple rucksacks. The mesh-lined padding isn’t the plushest; I found it comfortable during moderate activity into the 25-pound range, even though the rigid design could handle more weight. The waist belt is a minimalist strap and keeps the Honey Badger from shifting but doesn’t bear any load away from the shoulder straps.

The magnetic closure can be operated by one hand and without looking, and the corded daisy chains on the front and sides of the pack accepted clipped and lashed gear without complaint.

One of my favorite ways to use the Honey Badger was as a photo backpack. The combination of a padded camera insert and the semi-rigid skin gave my expensive camera gear what I considered unbeatable protection.

The translucent nature of the HDPE allows light to pass through; dropping in a headlamp transformed it into an easily visible cycling safety light. The HDPE also takes markers and paint pens well, giving the option to customize the Honey Badger artfully. The HDPE body also makes simple modifications possible; punching a hole and using a zip tie to add componentry is an example. Repairs are also straightforward as manufacturing employs the same simple methods.

The slick nature of the HDPE also allows the pack to glide across surfaces without catching, potentially adding safety in cycling and motorcycle crashes.

The main functional shortcoming of the shape and the rigid structure was that the pack wouldn’t stand up; the Honey Badger rolled over when placed on its bottom surface. When taking public transportation, and space was limited, I would hold the pack upright between my legs. The exterior volume remains constant regardless of contents, which was a hindrance when storage space was tight, and the Honey Badger wasn’t full. Finally, the HDPE sheeting has edges that at times could be abrasive or sharp feeling.

The SlingFin Honey Badger proved worthy as a daily commuting pack; I trusted the added impact protection for my most valuable electronics and found the suspended laptop sleeve to be unbeatable in that regard. It was also my favorite way to carry camera gear (in a padded insert) to provide confidence it was well protected.

The only real negative that stood out was the inability of the Honey Badger to stand on end.

The unique design of the pack is a head turner; at least a few times a week, people would stop and ask me what I was carrying, and explaining it almost always received the comment of “that’s cool.” So kudos to SlingFin for thinking outside the lines and creating a backpack that has real physical and functional differences.