Being prepared for a pop-up shower typically means stashing a bulky storm shell in your hydration pack that eats up space that should go to essentials like a pump, multitool or a whiskey flask. When you eventually put the shell on, you’re likely to get as wet from sweat as you would from the rain.

That’s a pain, so naturally my curiosity was piqued when I heard GoreTex was launching a 4-ounce shell. The company claims that it’s the lightest in the world, that you can stuff it in a jersey pocket, and it supposedly breathes well to keep you dry. It was my goal to see if that 4-ounce shell lived up to the hype, keeping me dry, while riding hard in blasting rain. 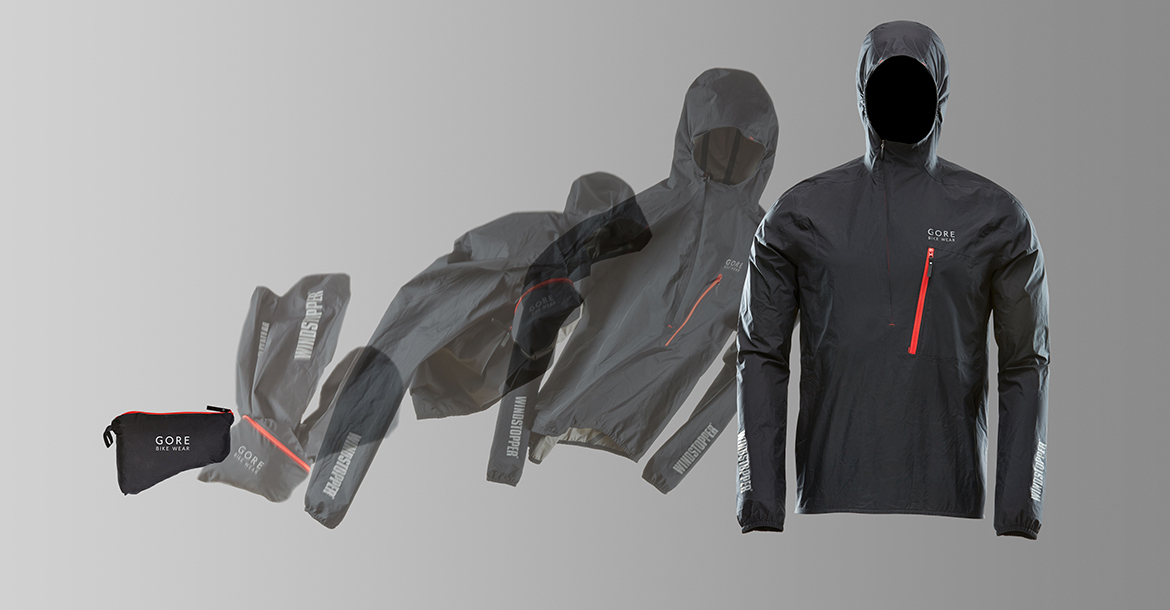 I stashed the Gore Rescue WS AS jacket into my hydration pack weeks before, just as my hometown went through a dry spell. I’d almost resigned myself to a test in my backyard with a garden hose when the skies finally opened up during an early afternoon ride at the nearby Town Run Trail Park. I’ve never been happier to ride in the pouring rain.

The jacket is made of Gore’s Windstopper Active Shell fabric, weighs a miniscule 4 ounces (size large) and folds up to about the size of a baseball, so you can stash it and forget it. Putting it on for the first time, I found the jacket to be very slim-fitting, so you won’t have excess material flapping around as you’re pedaling into the wind. Despite the close fit, I never felt the jacket impeded my freedom of movement to steer the bike, particularly maneuvering between the tight, tree-covered spots in Town Run’s back third. Standing up in the saddle to grind up Tetanus Hill and some of the other short rises, the jacket immediately fell into its proper place. 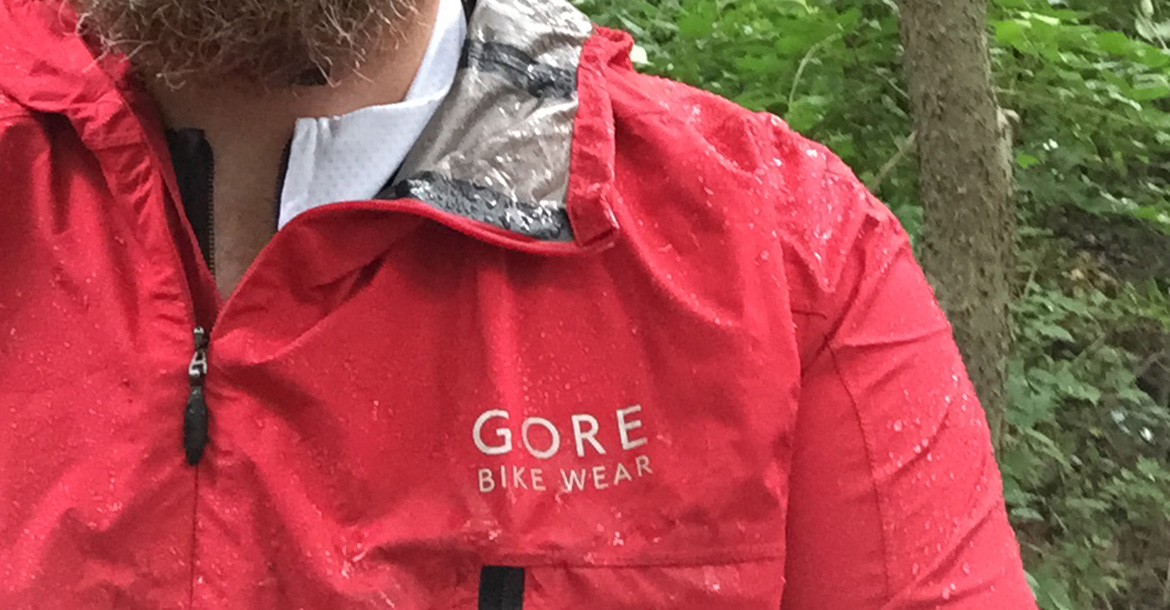 All of the seams are taped to prevent water from seeping in, and I’m happy to report none did. The jacket purports to be windproof, but only water-repellent. But Gore’s definition of rainproof is stricter than most manufacturers, hence the descriptive downgrade. However, I rode about 40 minutes without my jersey underneath getting even slightly damp. A few weeks later, I spent the better part of my Saturday doing skills drills during IMBA Ride Guide training at Southwestway Park. Once again, the jacket kept me perfectly dry and warm during a full-on downpour, especially when I wore the attached hood underneath my helmet for bit of added protection from the elements. 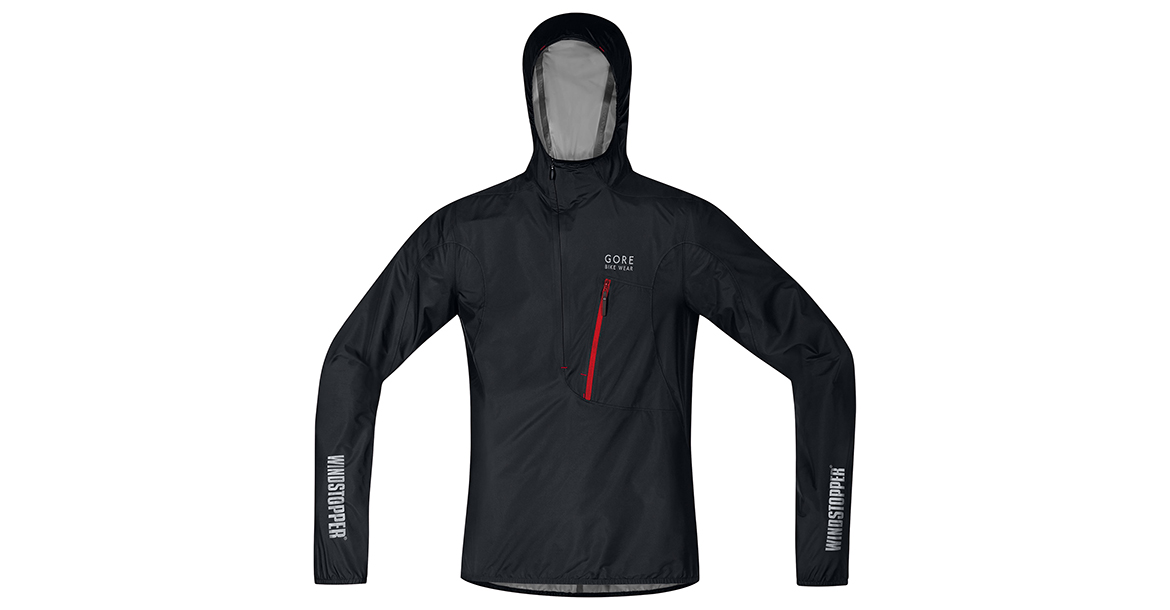 In order to save weight, Gore did make a couple of compromises, namely going with a half-, rather than a full-zipper. Combined with the slim profile of the jacket, it made getting my phone out of my back jersey pocket a huge chore. (There is a zipper pocket on the front chest of the jacket that will allow you to store some items.) The breathability of the jacket is a bit on the low side—a common complaint for most rain jackets—so in order to stay dry (from sweat), I was forced to dial back my efforts a bit. Which, in rainy conditions, is typically a good idea anyway.

Pulling it off at the trailhead, I noticed I’d kicked up quite a bit of mud onto the jacket. I was worried that washing it would destroy the protective coating on the shell, but a Gore representative told me that washing with mild, unscented detergent, air drying, then tumbling on low heat for 20 minutes actually restores the coating. The coating should last up to a couple of seasons before needing a fresh coat of water repellent.

The overall verdict? I’ll never worry about a few clouds in the sky again. The Rescue WS AS works better than how a jacket this light and packable has any right to be. Although I’d prefer a full zip and the resulting weight penalty of a few grams, this is going to be a mainstay inside my pack, especially for long rides in mountainous areas where the weather can turn nasty in a heartbeat.

We wanted to get some perspective on the Rescue Jacket from the people who actually designed it. Here’s an interview with Gore Bike Wear’s Head of Design Clemens Deilmann.

What’s your preferred style of riding? Are you more of a hammerhead or chill, “let’s enjoy the ride” rider and why?

Although I do ride both road and mountain bikes and test products personally, I am mostly an observer (when it comes to the serious testing). I am always dreaming up equipment, inspired by our high-performing athletes, events and life. Those athletes give input (into product design), then test it and provide feedback. We then do the redesign, engineer and test again.

Certain spots in Patagonia would be fabulous to take on … but I can see also the challenge to go on an epic ride through South Africa!

How did the idea for the Rescue jacket come about?

We wanted to create the lightest, most packable, water-resistant, windproof and breathable weather-protecting jacket for (riders). It had to have the most necessary features such as a hood and one pocket. The jacket was supposed to be an (virtually) unnoticeable insurance against sudden changes in weather conditions. A simple mission: keep athletes safe with the least additional weight and bulk.

We saw a big potential in developing lightweight garments and maximum weather protection for athletes in our range. The trade-off between weight and maximum protection was always a big challenge. In the end we had the chance to use the new Gore Windstopper technology with seam sealing tape to bring our concept to life.

How long did the process take from conception to completion?

In 2008 we started to create the concept. The materials and the workmanship were quite challenging and not available in the right quality at that time. Our concept was too advanced for the available materials and workmanship parameters we needed. We influenced and challenged the fabric engineers at W. L. Gore to fulfill our demands. From 2010-2014, we put the concept in the “vault of dead projects,” but we tested our prototypes anyways. In 2014, we started to get technological signals that gave us hope to further develop our concept for the 2016 season.

How did you get the weight down to just 123 grams? How much do the taped seams add to the weight?

The challenge was to only use the most necessary seams to get the fit ergonomically correct and add the features we needed. This concept idea would provide freedom-of-movement and the chance to reduce weight on seam-allowances and glue-tape. Even the seam-allowances are cut back to the bare minimum to save some grams. The zipper and the tape accounts for at least 25 percent of the jacket weight.

What are some cool features that the typical user might overlook?

To preserve the lightness, we abandoned as many of the hardware accessories as possible. The hood is a great example; we managed to create a great fit without any hardware. The chest pocket is the perfect size and placement to accommodate the jacket when stuffed inside.

How long will this jacket keep you dry in a deluge?

This piece is fully seam taped and it has a Gore Windstopper membrane, so I would personally take it out for a few hours, but it also depends on many other variables.

Have you personally tested it in the woods during a freak rain shower?

Yeah! I loved it. It’s easy to handle and has all the necessary features to get you to the next shelter. I rode 45 minutes in pouring rain, and it kept me comfortable, warm, and dry… even though my jersey was already wet and sweaty (when I put it on).