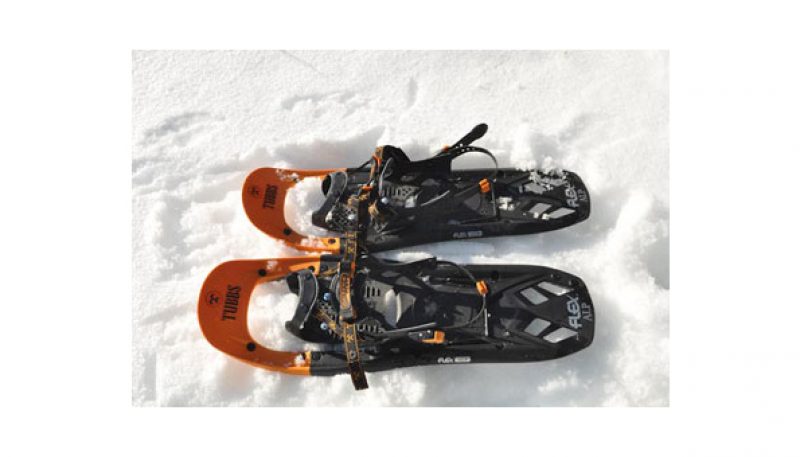 The single plastic single frame and combined deck of the Tubbs Flex Alp 24 worked well in powder, felt light underfoot and provided some of the best traction on hardpacked slopes. The binding was the fastest and easiest in the test group, but suffered some setbacks with larger snowboard boots. It worked better than most in deep powder and technical terrain, while the flexible tail added confidence that made running downhill a less harrowing experience.

Until I actually tested the Flex Alp, I had never believed that a molded plastic framed deck could deliver such performance, especially when advanced aluminum designs over the years have resulted in lighter materials and decking enhancements. My second impression was the way the large crampons provided tractor-like grip on hardpacked trails. The curved teeth that run lengthwise alongside the bottom of the platform are set much further inside than they are on the MSR or Atlas snowshoes, putting them closer to the foot to add lateral traction, especially when traversing over rocky areas.

The design of a flexible and slightly larger tail felt comfortable walking, however dragged more than others in the test group because of the length. The tail did seem to absorb more impact if you made an effort to land heel first with each step. In deeper powder, the Flex Alps shed snow better than any of the others in the test group due to a combination of tail drop, as well as snow channels in the rear that allowed excess powder to dissipate completely.

The binding, while the easiest and fastest in the test group, presented some challenges with larger boots. My snowboard boots repeatedly caused the rivet on the side of the rear strap at the back of the foot to pivot and eventually pop open and release in the back on deep, fast descents. On a full run in the deep, this caused my Flex Alps to completely dislodge from my boots. However, I was unable to duplicate the issue with smaller shoes or boots. The front straps secured the foot from above (pull straps over the top of the foot), and provided good support—especially laterally, where on very steep traverses my foot was less likely to fall sideways as in other shoes tested.  One issue I noticed with the front straps over the foot was a tendency to loosen some with heavy powder and running.  The front of the foot also experienced slightly more toe pressure on steep descents. The heel lift was a welcome feature for climbing.