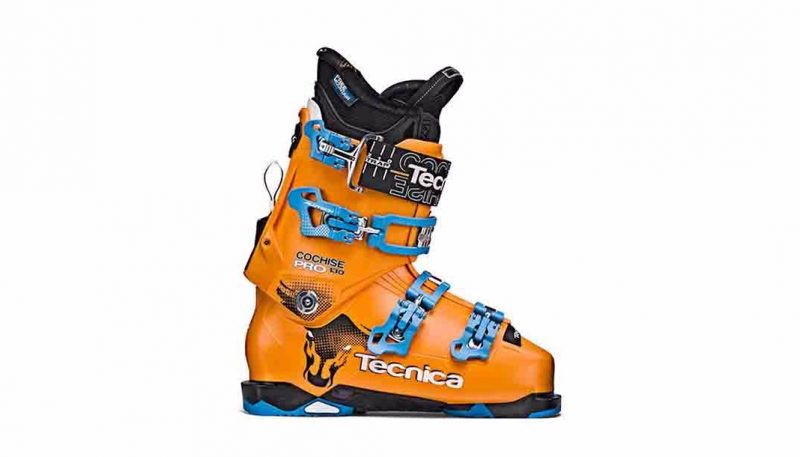 The stalwart Cochise Pro 130 is a resort-based freeride machine that’s best utilized for short hikes to demanding terrain, or simply ripping up the resort. Tech fittings and lug soles offer more versatility and specialization, though the fall line is where the Cochise is most at home.

The active powerstrap worked well as a fourth buckle, hugging the upper cuff close to my shins, which offered very quick and immediate power transfer, both fore and aft, as well as side to side. The fore/aft flex in downhill mode was more close to a 130 flex than the Lange XT 130. The boots were a little upright for my taste but very responsive nevertheless. I noticed their responsiveness most in negotiating awful refrozen moguls, meaning they helped me through terrible conditions with modest effort—something not to be underestimated.

They were a little heavy and, despite the coziness of the stock liner, a closed cell Intuition™ liner would do wonders to shave unnecessary weight. That said, the liner did seem to insulate against rock-hard conditions that tended to reverberate through my legs in early-hour refrozen ski surfaces. Also, the ankle pocket held my foot securely and the lateral stiffness I mentioned earlier is due primarily to the heel hold.

Versatility
The walk mode was enough for climbing up short boot packs, quick skins or standing in the tramline at Jackson Hole. And that’s what this boot was designed to do: allow access to quick hits not far from the lifts or roads, and still deliver on the down. It was never intended to be used to skin 4,000 vertical feet on all day or multi-day ski tours.