If you’re looking for a sleek, minimalist jogging stroller for road running, the Arrow is it. It was the lightest in our test, and has jettisoned or under-emphasized most of the extra features you find on other running strollers. It does cut back a bit on comfort, lacks car-seat compatibility, and is not appropriate off-road.

Design
Schwinn’s experience with bicycles shows through in the Arrow’s design—the stripped-down aluminum frame and wheels say “bike” as much as “stroller.” This is a jogging machine, plain and simple, with few bells and whistles beyond a detachable cup-holder on the handlebars and a small bag for doodads under the seat.

Performance
As long as you’re not making a lot of sharp turns, the Arrow is a great jogger, light and responsive. The fixed front wheel tracks well for jogging, and the handbrake on the handlebars makes speed control a lot easier, especially on descents. The adjustable handlebar is ergonomically tilted in the middle, covered with a hard rubber grip.

Comfort
The seat and harness are both serviceable but bare bones, and the shocks are stiffer than those on its cousin, the Grand Safari. Plus, its lighter weight gives the Arrow a ride that’s more Volkswagen than Cadillac, especially over rough terrain or when it’s windy. The seat reclines almost horizontal, great for rolling naps. The sunshade, though, is attached to the handlebars and doesn’t extend very far.

Convenience
At barely over 20 pounds, the Arrow is easy to fold up, carry and transport. It has the same secure dual-trigger folding mechanism as the Grand Safari, and both the cup holder and the under-seat carry bag snap on and off easily.

Quality
The Arrow is clearly designed for serious runners who prefer pavement to trails; I wouldn’t want to bang this one around off-road. It’s not that it’s fragile, it’s just not burly—more sports car than SUV. Otherwise, the less-is-more design leaves a few loose ends: the cup tray rattles and the MP3 speaker is cheap.

Value
For $200, it would be nice if the Arrow were a little more versatile. 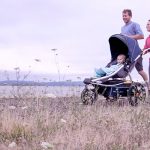